The Rocky Bones of a Dead Lake: the Trona Pinnacles 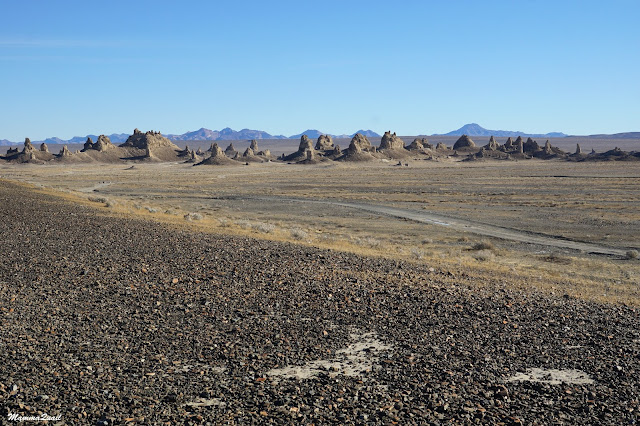 Last week I had a wonderful opportunity to take a close friend that's visiting me on a road trip to see  California's hottest place, Death Valley National Park. Needless to say, it was bitterly cold whilst we were there. On our way there, however, we stopped at a few other places. One of our stops was at the Trona Pinnacles, off SR178 northeast of Ridgecrest.

Access to the Trona Pinnacles is by a packed dirt road that's in pretty good condition. The pinnacles are visible from a good distance: they stand out, rising from the flat valley floor.
The Trona Pinnacles are Tufa formation: deposits of carbonate minerals left behind when the old lake that used to be there had dried out.
The area is on the western edge of the Great Basin Desert, and the Trona area is a basin - a watershed with no outlet. The water collects at the valley floor and evaporates, leaving behind salts and mineral deposits. The white flat in the photo below is the dry Searles Lake, the lowest area of Searles Valley. Above the dry lake are the Slate Range and the southern part of the Panamint Range, the southeastern border of Death Valley National Park.
The access road goes all the way down to the pinnacles. The road circles the main cluster of pinnacles but we parked at the large (and completely empty) parking lot and took off to explore on foot.
There isn't one specific foot trail there, but there are many use-made foot trails all over the place. It is also very clear that not everyone who goes exploring within the pinnacles area is on foot: tracks of ORVs were all over the place, even past the sign saying no ORVs beyond this point.
And then, there was this dark room curved into the large tufa near the parking lot. I don't know when it was dug there and for what purpose, but nowadays it is used as an improvised latrine :-( 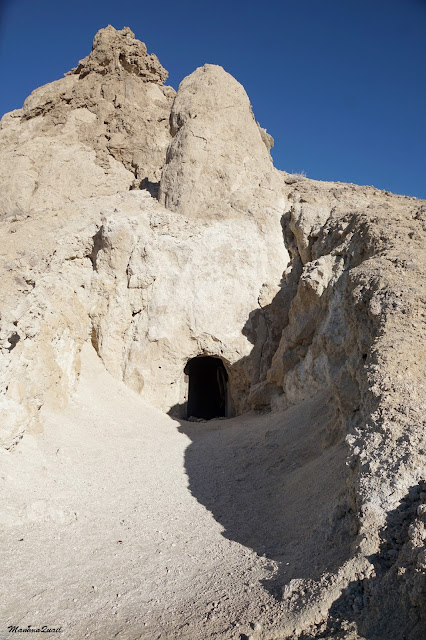 Trona is the name of a carbonate mineral which is the primary source of soda ash, a chemical used in various industries. The mineral had lent its name to the town of Trona, where this mineral is mined and processed. The Trona Pinnacles are on BLM lands and, thankfully, are not mined.
It was already late in the afternoon when we arrived at the Trona Pinnacles and we started our hike westward with the sun in our faces. The challenge it posed for clear photographing was offset by lovely silhouette compositions. 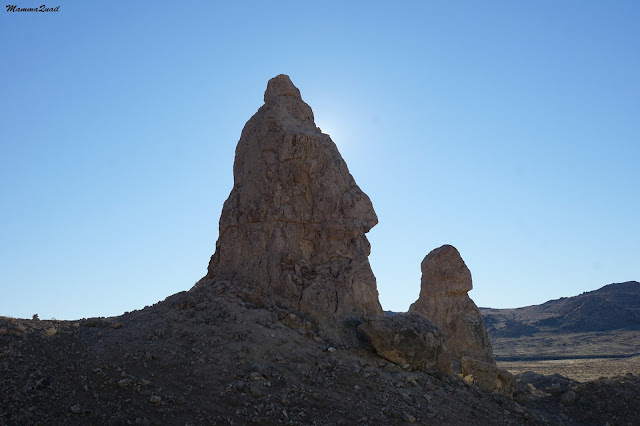 Some of the larger pinnacles had been climbed regularly. We followed these marked up to the base level where we could appreciate closely the rocks and the lichens. The few plants that grow within the pinnacles were mostly dry but new germination was visible everywhere - a promise for a nice, colorful spring bloom.
The local shrubs had a head start on blooming, the desert holly being the most prominent one there.
Most desert holly there grows on the soil base of the pinnacles. I photographed one that was growing out of a crack and posted it online. I have learned from members of the California Native Plants Society group, it is unusual for desert holly to grow in this way.
As we circumvented the main cluster of pinnacles the further ones came into view. They were not as many, as large or as clustered, but just as strange and interesting.
Exploring the Trona Pinnacles is like visiting a Tim Burton movie set. The rock figures inspire the imagination in wild ways. My friend and I enjoyed playing with the figures and naming them.

Coming around the main cluster also gave us a nice view of the southern end of the Slate mountain range, east of which is Panamint Valley.
As we approached the farther group of pinnacles we saw the wide Searles Wash below and headed down that way, hoping to see some wildlife. Tracks of ORVs were everywhere - this must be a popular playground for them.
Searles Wash had flowed very recently. The wash bed was still very wet and flow marks were fresh. Still, we detected no wildlife. Not out in the open, anyway. Burrows and feces were plenty, but the air must have been to cold for the local animals to be out. Or perhaps they are too shy of people there, where they're not really protected.
The shrubs, still showing the marks of the long drought, were already greening up beautifully. 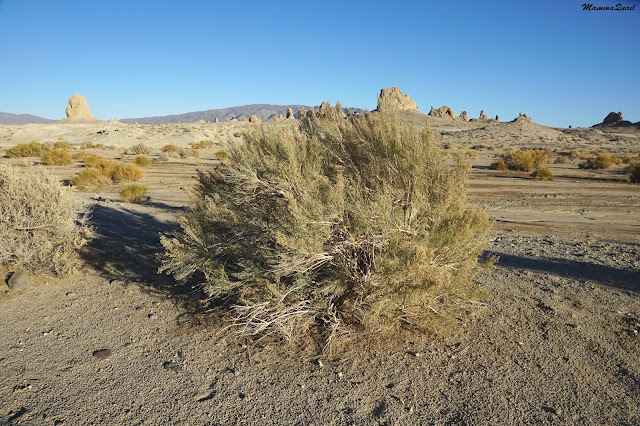 After giving up on finding wildlife we made our way back to the pinnacles, rounding from the north.
The sun was getting low by then, and the shadows long. It was the perfect illumination to bring out the best features of the rock formation's fantastic shapes.
But the late hour also meant that we had to hurry up. We had planned to camp at Surprise Canyon near Ballarat and we wanted to get there with some daylight to spare.
By the time we came around back to the western side of the main cluster there was one more car moving into the pinnacles area. They, too, were explorers. And they were the only other human beings we saw the entire time we were there.
The sun was setting when we completed our hike. I said a quiet goodbye to the rock formations. On my next visit there I'll bring the chikas too - they's love it there.
One last word: Tufa is the first sediment of a drying lake (because carbonates are the least soluble minerals). Searles Lake has been dry for a long time, and had dried naturally. New, young tufa can be seen at Mono Lake today. It is the sad outcome of diverting Mono Lake's Eastern Sierra tributaries to the use of the City of Los Angeles. While Owens Lake is already lost to the LA Aqueduct, the struggle to save Mono Lake is still going on. The dusty basin and bare, dry rocks of the Trona Pinnacles are a wonderful place to see, but their eerie beauty is also a large warning sign for what might become of Mono Lake should its tributaries remain enslaved.

Many thanks to members of the California Native Plants Society for the desert holly information!