The General and Associates: The Grant Grove of Giant Sequoia

The day after our 'must see' visit to Yosemite National Park my friend and I were heading up the mountains again for another must see: to the Giant Sequoia of Sequoia National Park. There area Giant Sequoia in Yosemite too but the nice groves are inaccessible during winter. Sequoia National Park, however, where the main road goes right between the giants, was open. Or at least that's what the web site info.
It was a glorious morning. Sunny and beautiful Monday. A regular work day in off-season January, and we had the road from Fresno to Sequoia NP all to ourselves. Without any traffic delays we were quickly up at the snowline. The mountainside scenery was absolutely gorgeous. But all that forest beauty was laced with the brown bodies of the trees that died of thirst and boring beetles. We were looking at the aftermath of 4 years of drought.
My original plan was to drive directly over to General Sherman: the biggest sequoia in the park, but at the Grant Grove Visitor Center I was informed that the Generals Highway was blocked off.
"You'll have to drive down and around, and come all the way back up from Three Rivers," said the gate attendant.
I wasn't going to waste two hours of daylight on unnecessary driving, so we settled for seeing another giant sequoia: General Grant.
The access road to Grant Grove slopes down with a steep grade. It was icy, too. We made it carefully to the parking lot and I prepared my camera while my friend stood gaping at the nearby sequoia trees.

The Grant Grove trail is short and paved. It is also sloped and when we were there - covered with icy snow. So back in crampons we were.
We did the loop slowly, and not because of the snow. Every tree in that grove merits special attention. Particularly when seen for the first time. My friend craned her neck so much that it ached. She also took photos with her phone, some of which I've used in this post. I credit her as Mama Chukar - an Old World bird introduced in California.
A fallen giant lies on the ground. It is completely hollow inside and beaten to sleekness a path inside the tree connects to the other side of the trail. 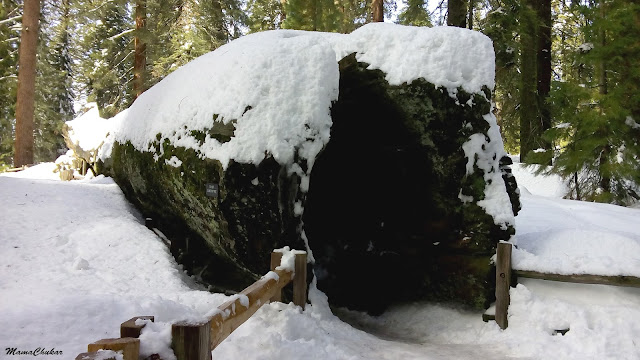 Naturally, we went inside. The wood was smooth from the multitudes that have passed there before us. 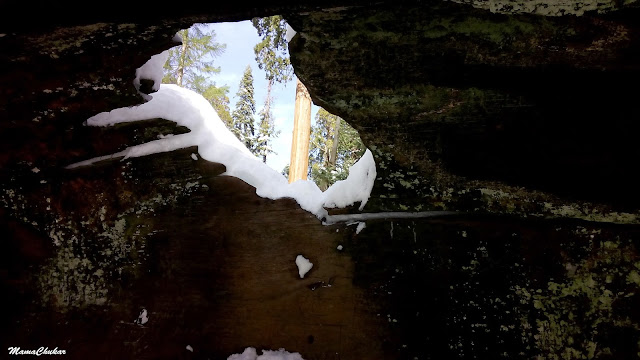 Some visitors decided to leave a more personal mark in the tree. A cut section was etched with carved graffiti. Some of the carvings were dated and pretty old. I didn't spend too much time on these but did catch the years 1880 and 1885 carved in the wood.
I honestly don't like this practice. It feels sacrilegious to me. 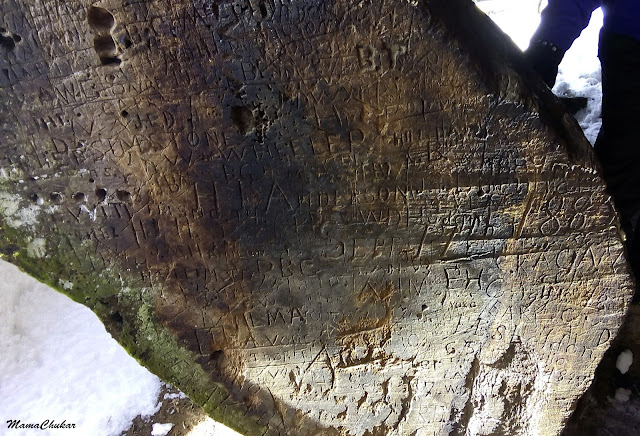 We didn't want to short-cut our loop so we walked down the tree tunnel back to where we entered and moved on.
A gap between the trees, and there was General Grant in full view, the sunlight beam directly on it. And from that distance I could get it all inside one photo :-)
Fresh snow always remind me of whipped cream. I have to resist the urge to lick it. 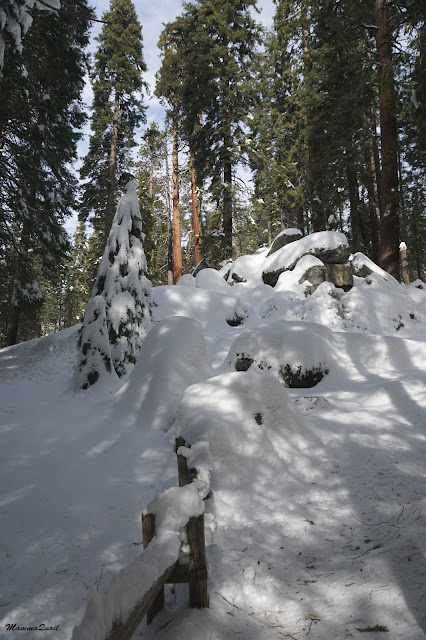 The snow was pretty high everywhere except for the trails where it had been (mostly) removed. The Grant Grove trail also features benches for the tired. We declined.
Giant Sequoia and white fir aren't the only trees in that forest. There were a few broad-leaf trees about, all stack naked. A single leaf on the snow revealed the identity of one of them: a dogwood tree.
We circled around General Grant, but there was no getting the whole of it into one photo. Even the 'smaller' sequoia posed a serious challenge for my camera. I was fine settling for nice canopy shots.
Nearing the end of the loop we came upon the Gamlin Cabin. This old log cabin was build by a logging prospector who also raised cattle in the area. Later on, it was used as the first headquarters of the new Sequoia National Park.
I was fascinated by how the walls had been built by latching logs but the roof beams have been nailed together. I wondered if the roof might not be the original but found no one to ask.
Early January days are awfully short. When we finished the short Grant Grove loop the sun was already leaning heavily to the west. I caught it trying to sneak away behind the trees. Those trees, however, were giant sequoia. There was still some tome before the sun would touch the lesser tree tops. 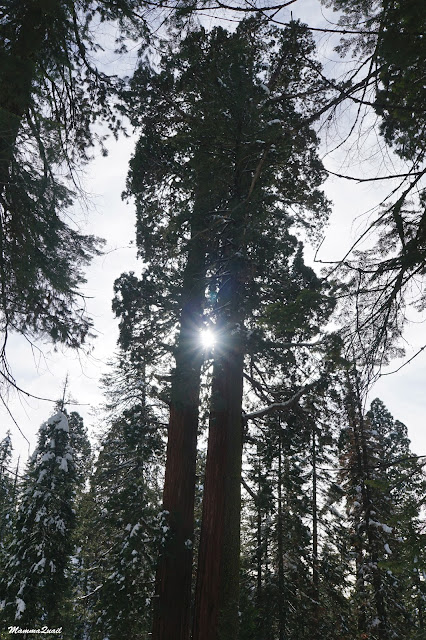 That meant we had time for another trail.  So we put on our snow shoes and headed out to trod the Dead Sequoia Loop Trail.