Friends from Santa Clara (a.k.a. Silicon) Valley scheduled to go on a hike with us on one lovely Sunday afternoon in February. They left the choice of destination to me and, encouraged by all the recent rain, I wanted to see a waterfall. A quick search online revealed to me quite a few Bay Area waterfalls that I have not seen yet, and the dice fell on Brooks Falls at San Pedro Valley Park in Pacifica.
We got together at the park and found the trailhead to Old Trout Farm Rd., between the restrooms building and a large oak tree. Hanging under the oak, apparently in mid air, was a small, green caterpillar. 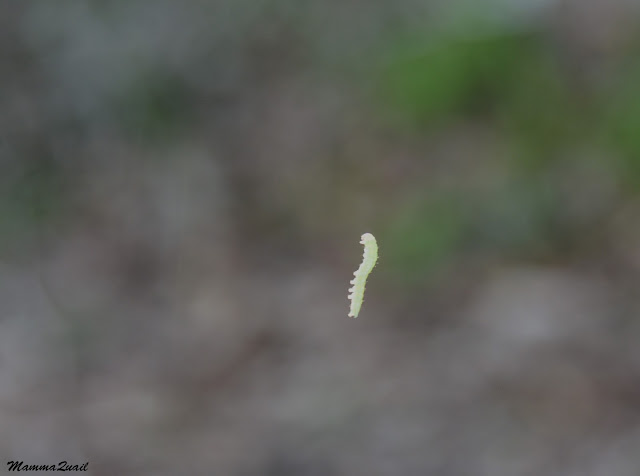 The way to the waterfall view point begins at Old Trout Farm Rd. It is a wide dirt road that looks like it hasn't seen a vehicle in a very long while. It's easy to walk on, however, even when the ground is wet.

The heavy rains had cause quite a few problems for the human communities around the Bay, but the forests welcomed the soaking and responded with vibrant growth. Mushrooms too popped under many trees, although not as many as I had expected. Still, it was quite nice to see some interesting fungi bloom. 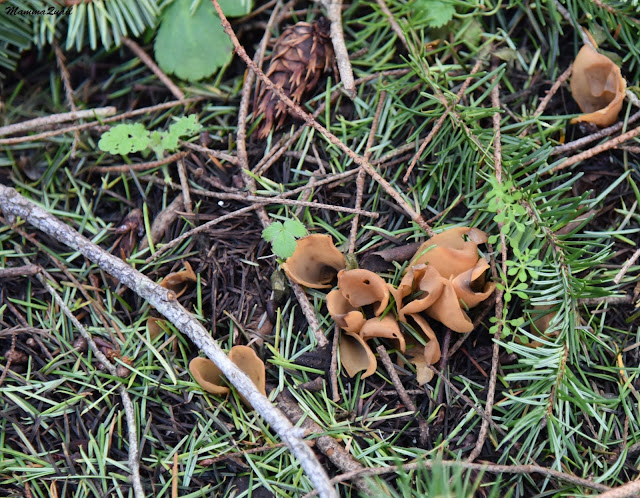 I was behind, appreciating the mushroom still, when the family called me to hurry forward: they had spotted an interesting flower for me. I reached them and stood there gaping, for I was standing right in front of a wildflower I have so far seen only in other people's photos: a California Fetid Adderstongue. This one can be found naturally only in the coastal region of California, and it was my first time seeing one in bloom. I didn't know that at the time, but I did know it was something special that I've never seen before.
"Here, here!" called the family. They were pointing at some blue forget me not that were blooming nearby. I waved dismissively at the forget me not and pointed at the adderstongue.
"This one," I said, and knelt down to take a close up photo.
A few steps later I was blessed again with a blooming trillium, another special wildflower, and a California species of trillium. I did see trillium before, and in large aggregates too, but I'm always pleased to see them. And this one was the only one blooming I saw on the hike.
I regret to say that most of the trees growing in San Pedro Valley Park are Eucalyptus. But the trail that we hiked on featured also pine trees, of which species I cannot tell.
The pines were just beginning their bloom. Soon the entire forest floor will be covered with mats of yellow pine pollen. 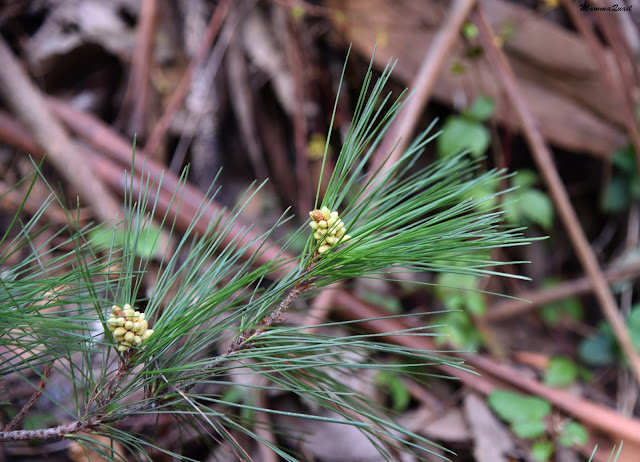 We reached the turn to the Waterfall View Trail and turned right into it. Now we were on a narrow trail that climbed more steeply up above the creek.
By theis trail I started seeing the familiar early bloomers: the milk maids.
Soon we broke out of the trees and were walking through thick chaparral dominated by manzanita bushes. We were walking due west and whenever the sunlight was on the path, it was also shining right into our eyes. 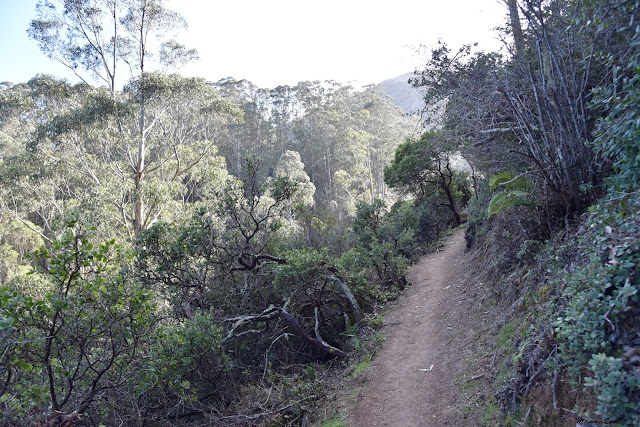 The sun-exposed areas had very different wildflowers bloom, like the hedgenettle.
There were also some nightshade shrubs, but only few were blooming. They were just beginning.
about a mile up we came into view of Brooks Falls. I could barely see it - the westernizing sun was in my eyes. The high vegetation near the trail didn't help either. \We went on a bit until we reached the vista point where there is a bench overlooking the falls, and the trail side vegetation is low enough. There was still the sun in the eyes, but at least we could see the entire 3-steps length of the waterfall, and we could see that it was flowing nicely indeed. I wondered aloud if there was any trail to get nearer to the falls (none was marked on the map) and another hiker heard me and said that there used to be a trail that lead under the waterfall, but it was taken out. Now I wonder why.
I was unhappy with my photos of Brooks Falls. While we sat there and ate a snack, Papa Quail took my camera and went ahead until he found a better view and snapped a few decent shots of the falls.
We got up to go on. The children took some time to get going again. Meanwhile I was attracted to an  inflorescence of a pampas grass that poked out of the manzanita bushes and was beautifully lit (as well as the gnats) by the afternoon sun.
After the waterfall view point the trail curved to the northwest and we lost sight of the falls. It was also going steeper than before, and we needed to make frequent stops to let everyone catch up.
I kept looking under the manzanita bushes, searching for Indian warrior plants, but saw none. I did get to see plenty of other little plants aiming to be big some day.
While still officialy winter, spring was already underway. Even the willows were blooming, putting forth their flowers before the new leaves.
Suddenly we were not climbing anymore, but walking a level trail until we reached its end. The Waterfall View Trail ended at the Montara Mountain Trail, and the view west at the intersection was wonderful. All the way own lay the town of Pacifica and behind it the ocean. Light breeze came up the slope to dry our sweat. It was beautiful. 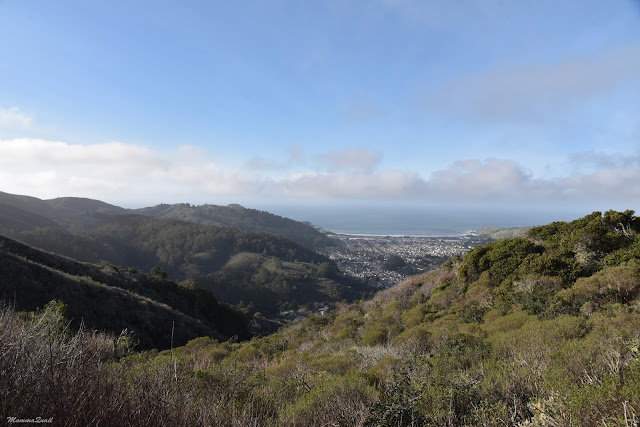 there was a bench there, and we stayed there fore some time, enjoying the view and the breather. Pappa Quail used the time to photograph a hummingbird nearby.
Somewhere in that area he also photographed a chipmunk. Later he identified it as Sonoma Chipmunk, a species that is listed only from Marin County and north.
If we had turned left we would have gone up to the peak of Montara Mountain. That was not in our plans, however. Certainly not so late in the day. We turned right to go downhill on Montara Mountain Trail.
The trail was guarded by a manzanita in full bloom, wearing spring like a fancy chandelier.
(Me thinking of planting manzanita in my yard)
As we walked down the day grew older and the shadows lengthened. The chaparral below us was shaded fully now, leaving only the eucalyptus grove on the hill still illuminated, and the Peninsula Ridge far in the background. 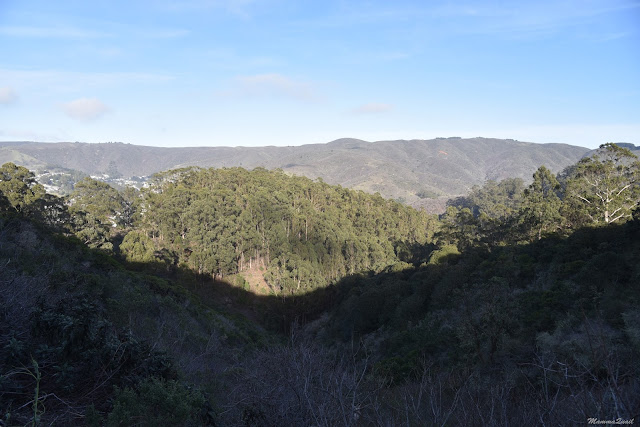 Soon we were too in the shadow. The shadow of the manzanita roof overhead. 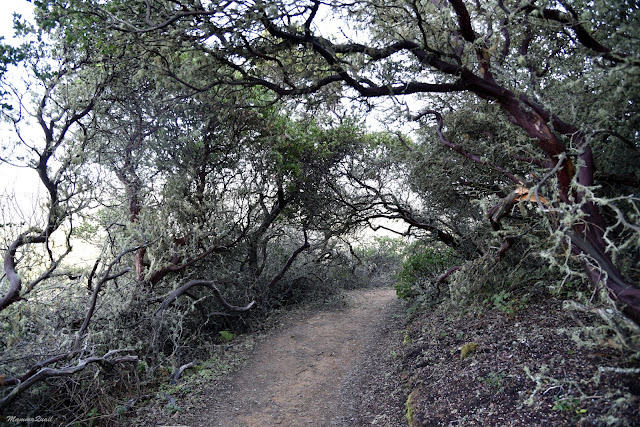 In that shadow of the manzanita two little chickadees were having a noisy feast, I don't know of what. They didn't keep still and at no point were in full view. But Pappa Quail managed to capture the moment, even if partly hidden.
Our friend called me and pointed at a pink bloom near the trail. It was a small chaparral currant, the only one I've seen blooming that day.
We hiked down much faster, and not only because of gravity's help. It was also getting pretty late and the chikas started talking about dinner. Still, there were quite a few pretty sights worthy of a photo pause. 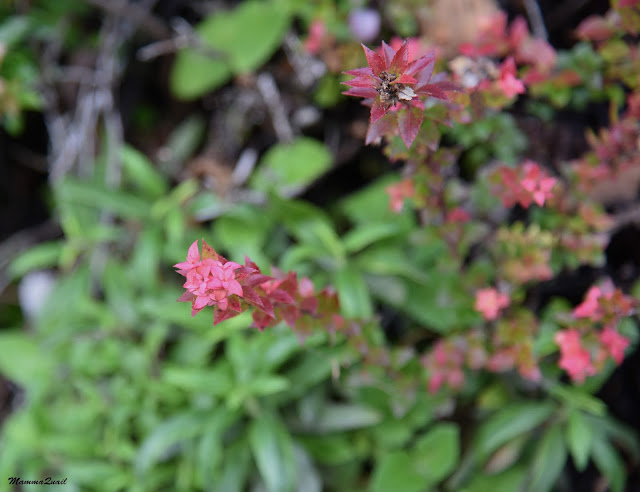 My elder chika suddenly stopped as well. "Strawberry!" she exclaimed. I managed to stop her from eating it long enough for a photo. It was the first strawberry of the season. Spring really is here.
Every now and then we crossed sunny patches, which were getting fewer and fewer as time wore on. In one of those patches of sunlight, about half way down the trail we saw a group of iris flowers. They too were just beginning their bloom season.
On and on, down and down we went. And the trail turned and twisted, and at times we were facing southwest again, and ahead was the peak of Montara Mountain. One of these days I'll hike all the way up.
The most dominant tree in San Pedro Valley Park is the eucalyptus, an immigrant from Australia that feels very much at home in the California coast. Once established, eucalyptus are pretty much impossible to remove. Very much like grass.
We were descending through a thick eucalyptus grove that had very little in terms of undergrowth. Some ferns here and there, and poison oak. In one place the trees opened up to reveal the view of the town below and the ocean in the background. A very pretty view. So thought also the park authorities, for they placed a bench over the trail, looking out at that view. 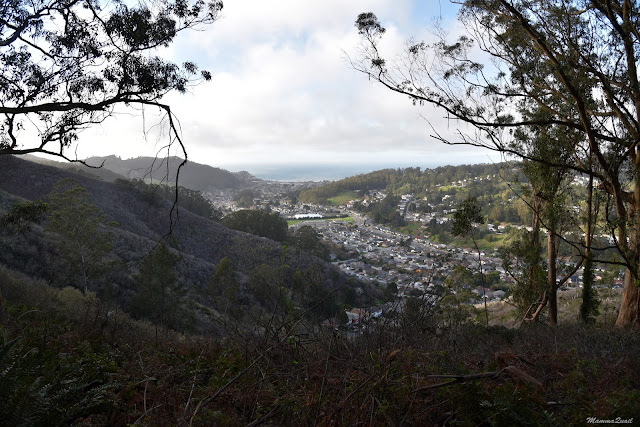 We didn't hang around that bench but went on down the trail. Now our little group was very stretched, with large gaps between our people. I lingered behind more now, not for the plants but to keep watch on my younger chika who was walking without any hurry, waving a small eucalyptus twig and chanting to herself.
I pulled her out of her reverie to look at a banana slug, one of many we've seen that day, that was busy eating a mushroom.
Exiting the eucalyptus grove we came through the last sunny patch of that day, and saw a bunch of star lilies blooming there.
Somehow I had passed Pappa Quail along the way down and now he was behind me, walking closely with the young chika. Seeing that she was not alone I hurried down the trail, trying to catch up with the elder chika and our friends. On the way I passed the only oak I've seen that day. Beautiful and majestic it was, but lonely. Eucalyptus don't make friends with other trees.
There were many hound's tongue blooming along the trail, especially in the shaded area. It was also the last wildflower I've seen on the trail before completing the loop and walking back into the parking lot.
We had a lovely hike that afternoon, in a very pretty park. It wasn't a big trail but it was rich with diverse vegetation and had quite a few beautiful view points.
And t has a view of a nice, big waterfall. Next time I'll be there in the morning, and see it in the sunlight.