Short and Sweet: A Loop Around Bollinger Creek at Las Trampas Regional Wilderness 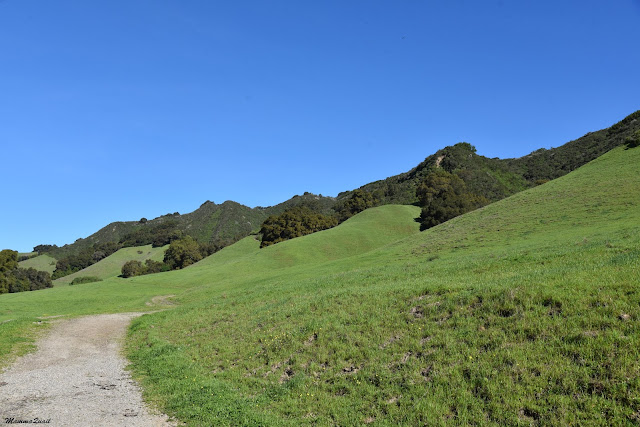 
Necessity had me change the destination of our latest 4H hike at the last moment. I therefore chose the Bollinger Creek Loop trail at Las Trampas Regional Wilderness, a nice, easy trail near Castro Valley where members of the Hiking Project needed to be. I know this trail well, as I used to hike it often whet I lived close to that area, but it has been nearly four years since I last hiked it, and I needed to make sure that everything was still in the same place before taking the group there.

The trail system at Las Trampas isn't very extensive but it is well connected to nearby East Bay Regional Park trails, and well as trails of the East Bay Municipal District (EBMUD) lands (to hike which one must first obtain a permit).
The little loop trail around a section of Bollinger Creek is a lovely introductory level trail with very beautiful views, interesting vegetation, and good chance of sighting wildlife.
I was a bit worried before the hike because I was going there only a few days after a good rain storm and my experience there had taught me (the hard way) that even this simple and easy trail can become quite challenging when muddy. To be on the safe side I wore my sturdy hiking boots and brought my poles along.
I was a glorious day. Sunny and mild. Perfect for hiking. I decided to hike the loop counter-clockwise and begun on the off-creek trail at the foothill.
The grass was bright green and mowed close to the ground by the cattle that graze this area. Near the treelike that marked the creek I saw a nice patch of yellow flowers - buttercups. 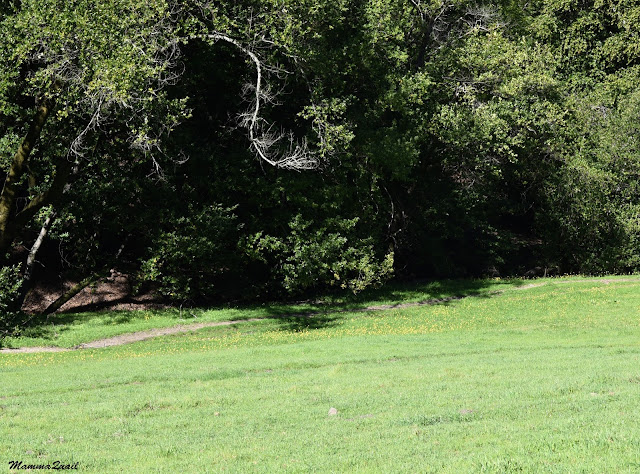 I stepped off the trail to take a closer look. They were indeed buttercups - one of the earlier species to bloom in the Bay Area. I snapped a few shots and went back to the trail, skipping over cow pies and little streams of water that sprung from the only slightly higher ground above me.
Both arms of the loop go along the contours of Bollinger Creek. The eastern one that I was walking on is a bit removed and allows a nice view of the riparian growth of the oak, laurel, and maple trees that mark the creek line. 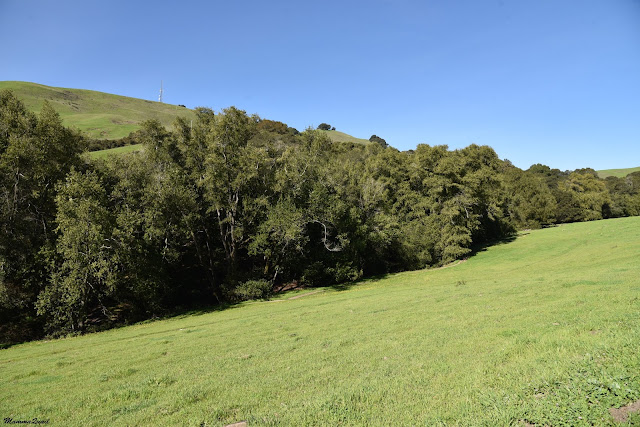 I was going northward, and to my right towered the hills of Bollinger Ridge. The trail going up those hills are very pretty, yet quite strenuous, especially during summer. The hills look much milder from below. 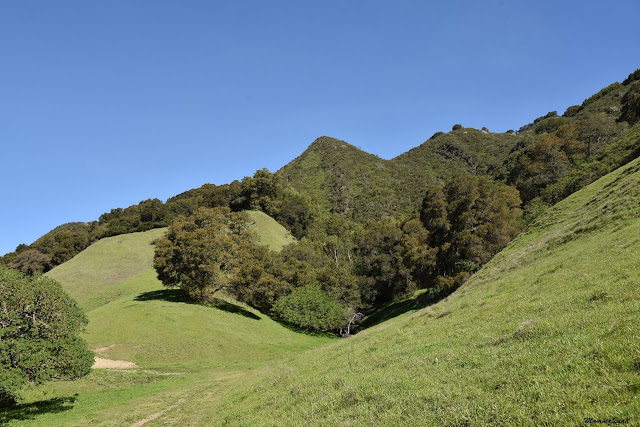 There wasn't much bloom that I could see, save for the buttercups. Perhaps it was too early in season. Perhaps it was the grazing effect. Either way, there wasn't much of a color show on that day. I was very happy therefore, to see a little patch of lupine near the trail.
The deciduous trees, however, were already wearing their new spring foliage.
The trail wound quickly under my gait and soon I was nearing the turning point to the creek trail. Just before arriving there I had to cross a little muddy stream that flowed from the hills to join the creek below. With my high waterproof boots and hiking poles I balanced myself on a narrow line of grass to the side of the trail and thus crossed the brook without sinking in the mud. 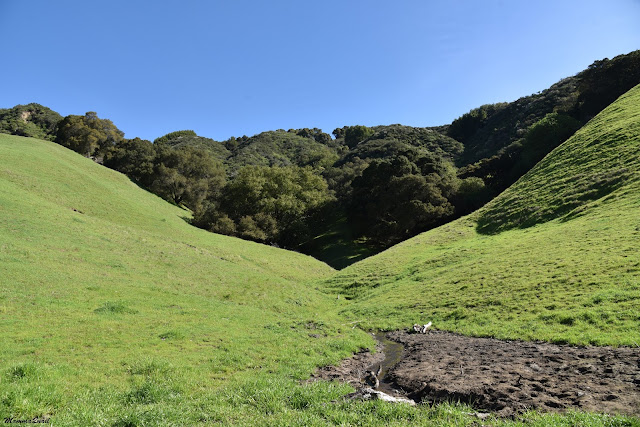 It was still muddy on the morrow when I was there with the 4-H children, and they chose to leave the trail altogether and go closer to the hill where they could cross the brook with a single hop. There, between the trail and the hill the area was flooded. In the green puddle the 4-Hers made a discovery: brown and green tree frogs. We saw at least 10 of them there and there were probably many more. Pappa Quail, who had joined our 4-H hike took a photo of one of the frogs.
At the trail turn to the creek I sat down for a short break. Just ahead of me was a large maple tree covered with blossom. The tiny spring leaves were just beginning to bud out.
The off creek tail continues further north and eventually connects with Redwood Regional Park. I did not continue along that trail. I did notice, however, the numerous mud slides that had occurred following the stormy winter. 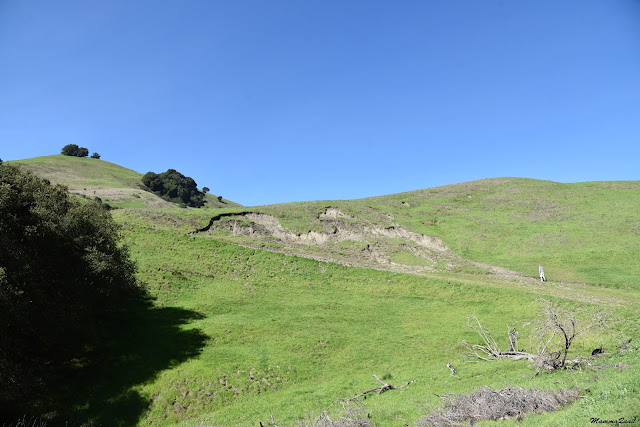 I turned toward the creek. The partially shaded area at the edge of the trees was covered with miner's lettuce - this cute little plant is also one of the first species to bloom. It is also very tasty.
Fresh growth was everywhere, and not just on the ground. The trees themselves were putting on a spurt of new growth.
Water was flowing along a rut parallel to the creek. Strangely enough, the creek itself wasn't flowing all that much.
I crossed the rut, then the creek, and started back south along the narrow trail that runs close to the creek right under the trees. 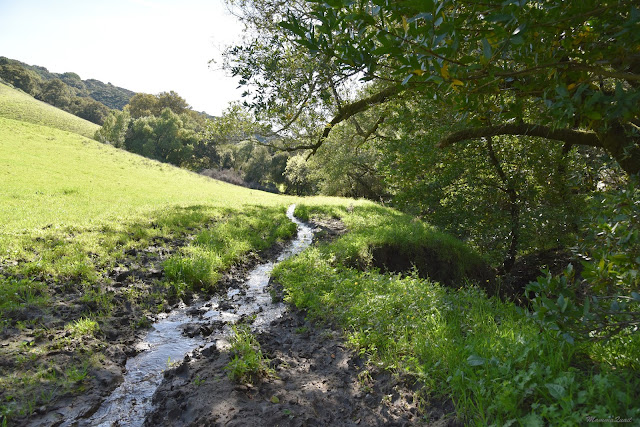 One of the early shade-loving annuals that are first to bloom is the milkmaids. Its little white blossom dotted the line forest's floor.
I called it a line forest because it was so thin - a narrow strip of trees hugging the creek no more than 20-50 yards east or west.  A strip of protective coolness from the hot mid-day sun. 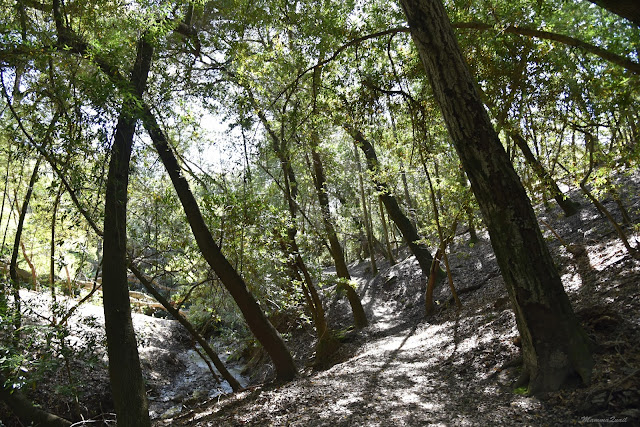 I walked on southward, going up on the slope at one point to bypass a section of the trail that was damaged in the storms. All and all, the trail was not half as muddy as I had feared and was very easy to walk on. 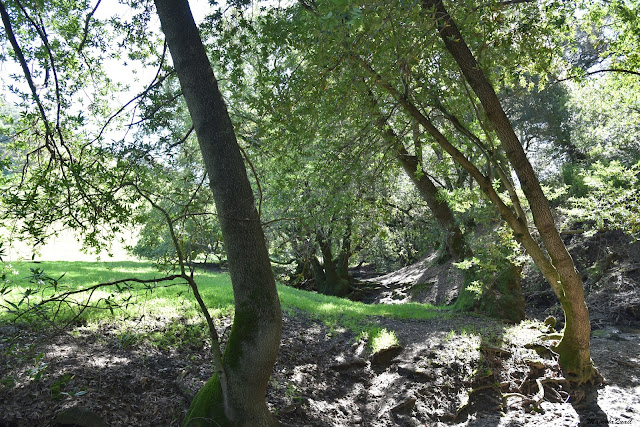 As I was closing the loop the trees thinned a bit and I passed through bigger sunny spots. The sun rays penetrating the canopy allow some nice undergrowth to thrive in these places.
A sunny spot is also the perfect place for sunning :-) 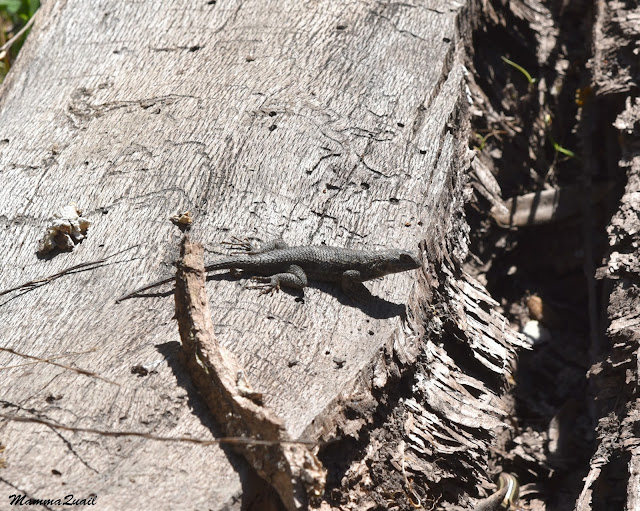 There by the creak I saw the new spring growth of poison oak. The previous year had seen me changing status from 'immune' to 'sensitive' and now I carefully avoid this plant, pretty as it is.
I stepped out of the woods and passed through the narrow gate in the cattle fence. To my right (west towered another hill. The park's trail ends there at the ridge. Beyond that it's EBMUD land. One day I'll check it out. 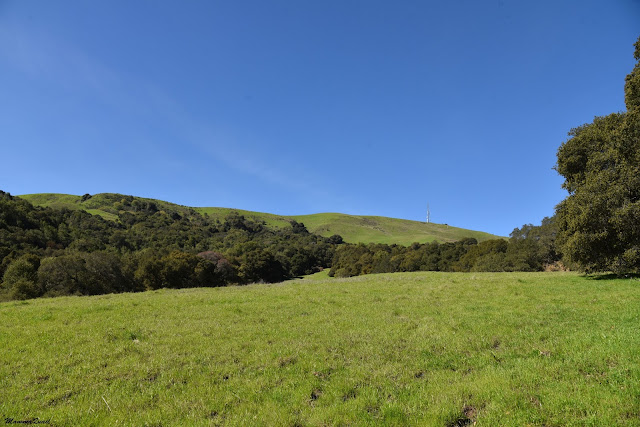 In the few minutes I had left before having to go and take the chikas from school I sat down at one of the picnic tables near the parking lot and watched little California towhees as they scratched the leaves-covered ground. On a nearby table lied a man deep in peaceful meditation. For a few moments the world was a quiet, calm place, a perfect bliss. Then a tiny dog rushed near me, all excited about something. The dog's owned rushed apologetically after her, clipping on the leash and pulling her away. The moment of peace was broken. The meditating man sat up. I gathered my things, stretched my legs, and walked off to my car.

I was back on the following day with the 4-H Hiking Project. We had a very lovely hike, but it was anything but quiet. It was also cloudy again. A day after the rain had returned.