A Desert Jewel Tucked Away: Owl Canyon at the Rainbow Basin 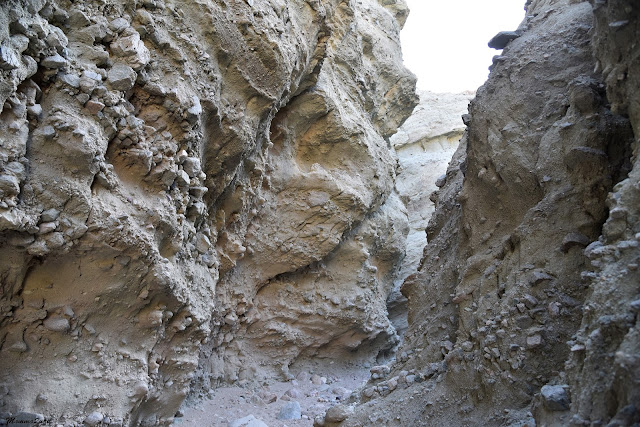 On spring break with only 5 days to catch up on this spring's superbloom we whooshed through Carrizo Plain on our first day, and on the second we hurried south toward Joshua Tree National Park only to find ourselves stuck in a huge traffic jam near Boron. We bypassed the traffic jam by taking the long dirt road called Rosewood Blvd which turned out to be an amazing ride, deserving its own blog post. So it was than when we finally arrived at Barstow it was already way past lunchtime and we were all famished. After taking care of that we popped in the town's BLM office and inquired about local hiking trails. They sent us to Rainbow Basin Natural Area - a place I already noticed on the map and thought might be a good spot to check out. Turns out it was a great spot to check out. 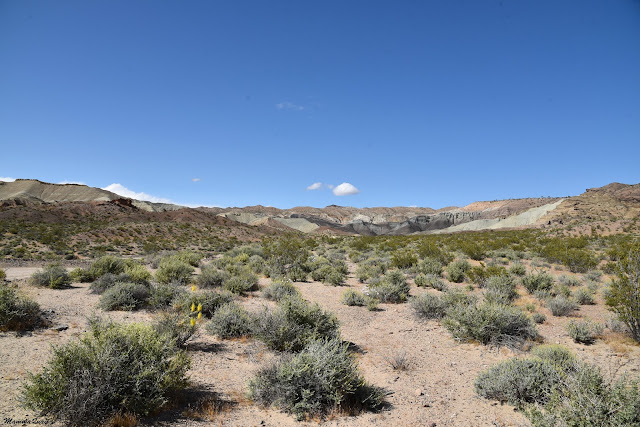 Already on the way we had to stop for wildflowers. The prince plume with its bright candle-like bloom lit up the desert scenery.
We didn't stop for the prince plume. There were so many of them that I assumed we'll see them on the hike (and we did). What made us stop the car was the bloom of the beavertail cactus. It was the first blooming cactus we've seen on out road trip and we had to check it out closely.
On that stop Pappa Quail photographed an orange flower from afar. At home when we looked at the photo enlarged on the screen we realized it was no poppy in the photo. We saw many of them later along the Pain City trail in Joshua Tree National Park, but the first we've seen was in fact at the Rainbow Basing, except we didn't realize it at the time.
The directions we're clear and we had no difficulty finding the place. We did, however, overshot our turn to Owl Canyon, and instead of turning around right away we continued to do the short loop drive through Rainbow Basin Natural Area. 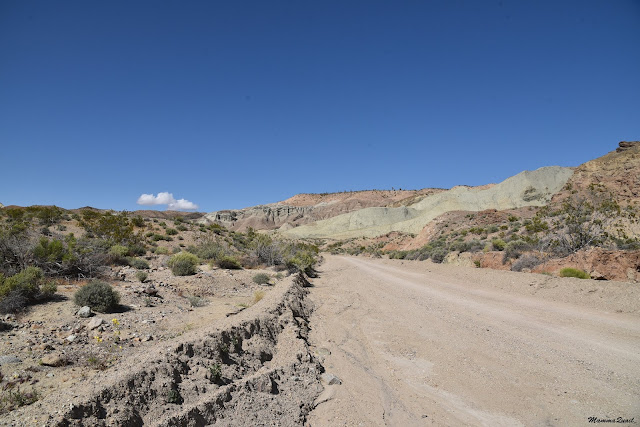 The dirt road we were driving on was on excellent condition, almost pavement compared with yesterday's Rosewood Blvd. Still, we were going slow, taking in all the beautiful geology around us. 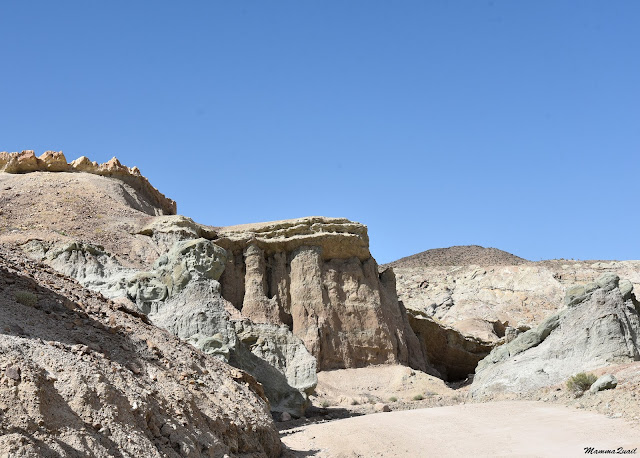 There is a place along the loop with a wide parking space and a view point of the Rainbow Basin valley. We stopped there briefly to appreciate the rainbow colored rocks. 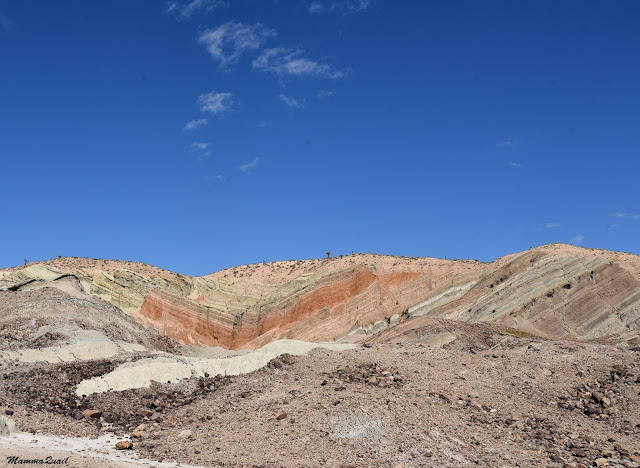 Of course we also stopped for wildflowers. Usually it would be me who would photograph the flowers on our trips, but this time Pappa Quail did a fair share of wildflowers photography. He too was very impressed by the lively awakened desert.
But still, his primary focus was on the wildlife, birds especially.
As for me, I enjoyed everything I saw there. And I made myself a mental note (and now a virtual one) to schedule Rainbow Basin into the plan of our next desert trip.
But we were driving long enough already and we were aching for some walking relief, and so we finished the short loop drive, saying goodbye to the beautiful rock formations that make this place colorful even at times when the plants are not, which is most of the time. 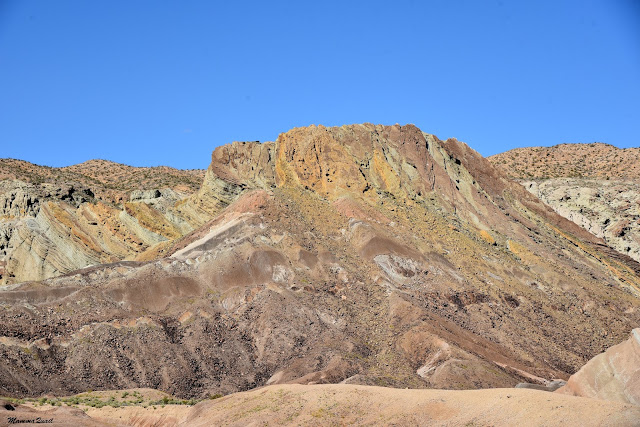 After finishing the loop drive we turned to Owl Canyon campground where the trailhead was. Only a handful of the campsites were occupied and the campground, which looked really nice and inviting, was very quiet (which made it all the more inviting to me).
We drove to the end of the campground and found the trailhead there. There was no description of the hike on the sign but the trail leading down to the wash was very obvious.

We went down to the wash where the trail merged with the creek bed. From then on we simply walked upstream inside the wash, kept in line by the canyon walls. 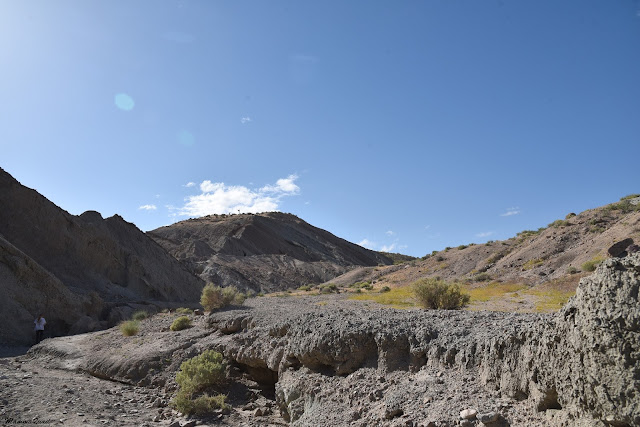 Every now and then we passed a flat sediment area which was covered with annual vegetation dominated by the yellow bloom of the desert trumpet. This plant look like a light yellow cloud and was very challenging for me to photograph. After many attempts I settled for the 'yellow dot cloud' look.
In the beginning of our hike the sun was still high and lit the canyon floor. It was nice and warm and for the most part we were protected from the wind that raged still higher on the slopes. There weren't many birds about, but we did see the turkey vultures circling above.
And below, i the gravel, little annual plants were making the most of the brief desert spring.
Not all plants are green. A little up the canyon I found a poor ambrosia bush nearly completely covered by dodder - a parasitic non-photosynthetic plant that looks like an orange spaghetti spillage.
Tributary creeks opened into Owl Canyon with each curve. One of them looked particularly fascinating, but I didn't have the time to go inside and explore it further - I had to catch up with my family again. 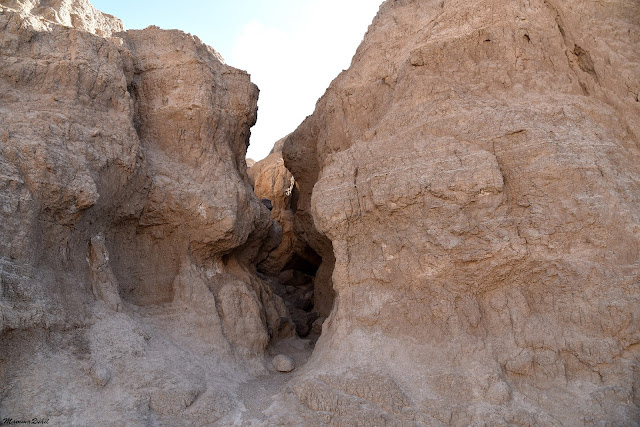 Above us on the cliff we were watched by the iconic representatives of the Mojave Desert - the Joshua trees. There weren't many of them there, and those we've seen had only few branches (branching of Joshua trees occur only upon blooming).
Down in the canyon we saw a few tamarisk bushes. I am very familiar with tamarisk as it is very common and a refreshing sight in the deserts of the middle east. In America, however, it is a noxious weed that takes over an altered habitat, endangering native plant species and the wildlife which depend on them. As pretty as this plant is, it is not a good sight to see in a California desert.
Along the creek bed there were plenty of other shrubs. Some were already done blooming.
I was pleased to see that many other plants were still blooming strong, adding brilliant colors to the local desert.
About midway into the canyon we cam upon a cluster of boulders that collapsed from the canyon wall. The boulders effectively blocked the straight forward path on the creek bed leaving us with two choices: to by bypass the collapse area by climbing a bit on the opposite, mild sloped canyon side, or to crawl under the boulders and go through the dark talus passage, assuming it did go all the way through. 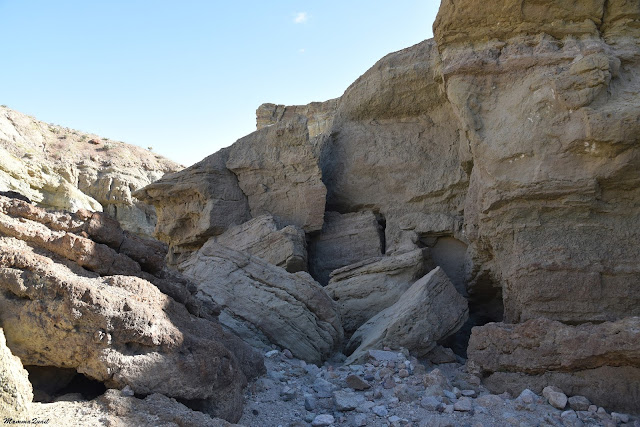 Not knowing for sure and with Grandma Quail not willing to crawl in the dark we took the first choice and assisting one another we passed the boulder obstacle and continued on.
Further up the canyon walls drew near and we were walking through a fine narrow passage. There, between the tall, straight walls it was already dim for the sunlight did not penetrate the narrows. 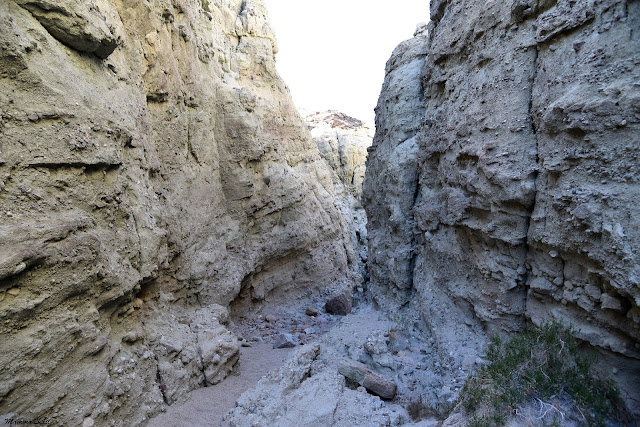 Every now and then we got a remainder that we were hiking in the Rainbow Basin area. Rocks of very different colors from their surrounding were carried over by long past flash floods and temporarily deposited were we had found them. Temporarily - until the next flood comes though. 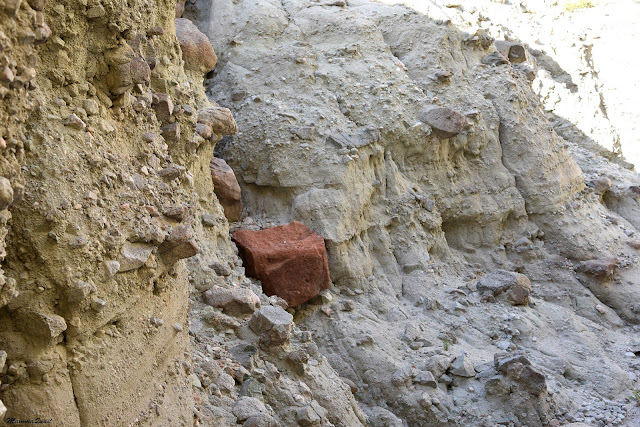 Past the narrows we continued slower up the canyon. We didn't have a map nor a good description of the trail on hand, and we didn't know if it was supposed to be a loop or just an in-and-out trail. Therefore we kept looking for any potential trail branching that might lead us out of the canyon and over the hill.
We didn't find any side trails, but Grandma Quail and I did find the inconspicuous desert plantain blooming on one of the side sediment shelves along the canyon walls.
Then Pappa Quail checked his GPS and announced that we had walked a mile up Owl Canyon. The path ahead seemed to involve some more rock scrambling and Pappa Quail suggested that I'd go and scout ahead to see if the way remains passable or if I could see any signs that the trail loops back at some point. 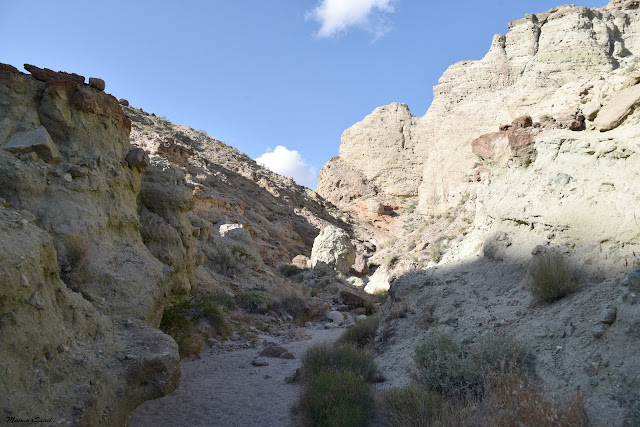 Pappa Quail allotted me 3 minutes. I grunted and hurried up the creek while my family sat down for a break.
All thoughts of the time limit blew away with the next wildflower sighting.
It wasn't much further when I reached a series of dry waterfalls. There was no way around them, which meant climbing. I climbed the first one, peeked ahead and saw there were more climbing to do. I knew that was the end of our hike because Grandma Quail would not climb these waterfalls. I wasn't even sure about the chikas. 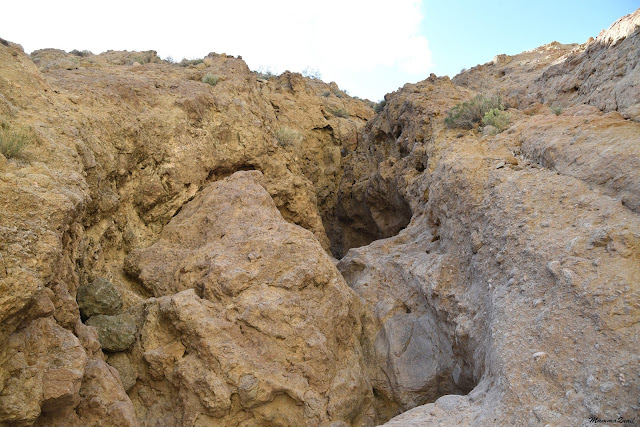 I climbed back down, caressing the beautiful rocks as I descended. There were nice rock formations to explore and a nice arch that let the sunshine through. I was loathe to leave so soon without a thorough exploration but I had to get back to my family. Besides, it was getting late and we still had a good chunk of driving ahead of us. 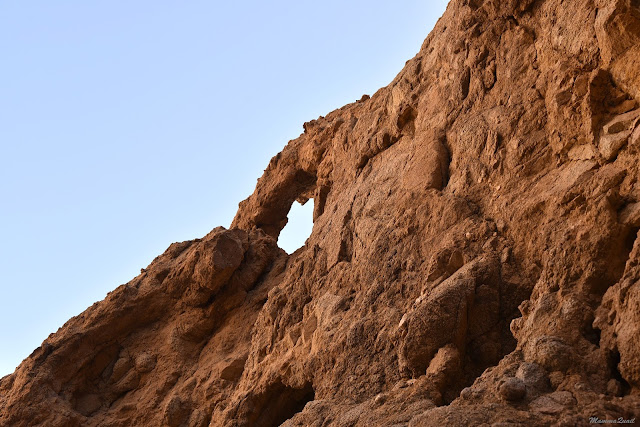 I consoled myself with a good close-up photo of a pretty prince plume and a silent promise to myself to return one day to this promising canyon.
I rejoined my family and gave a quick report, basically telling them to get up and turn back down the canyon. 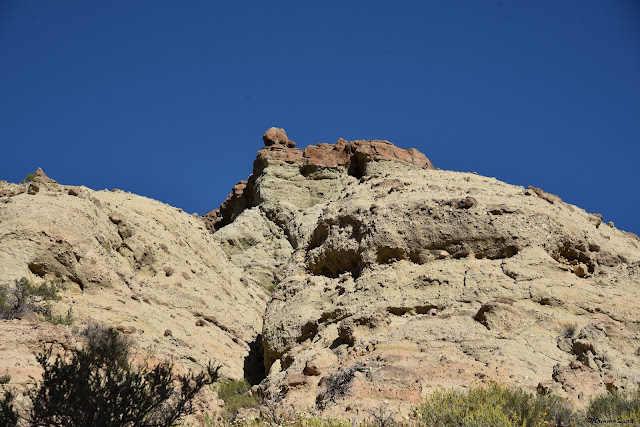 We moved back down the canyon at a much quicker pace now, but when Pappa Quail saw a hummingbird he stopped short and stood there for a while, trying to get a good shot of the tiny, hyperactive bird that was doing its best to keep a good distance from us.
Meanwhile my younger chika collected some nice colorful rocks and arranged them in a nice exhibit, providing another demonstration of the rainbow basin we were hiking at. 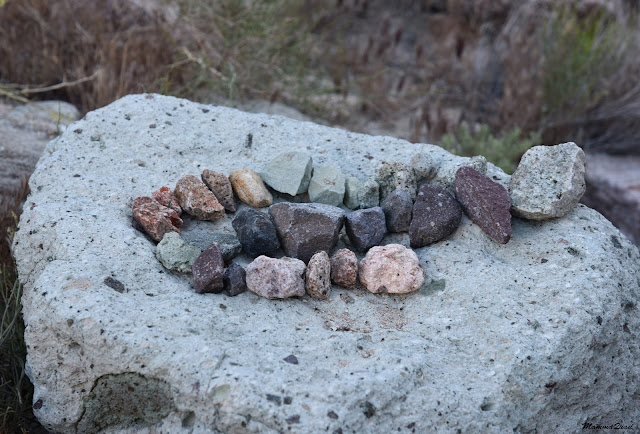 After Pappa Quail was satisfied with his photos we continued on. When we arrived at the rock collapse everyone went again over the side, but I chose to crawl under. Not that I found anything thrilling there, but it gave me a good feeling. I felt that although I had to settle for a short, quick hike, I could still get some extra thrill from it.
And at any rate, the rocks looked very pretty up close :-) 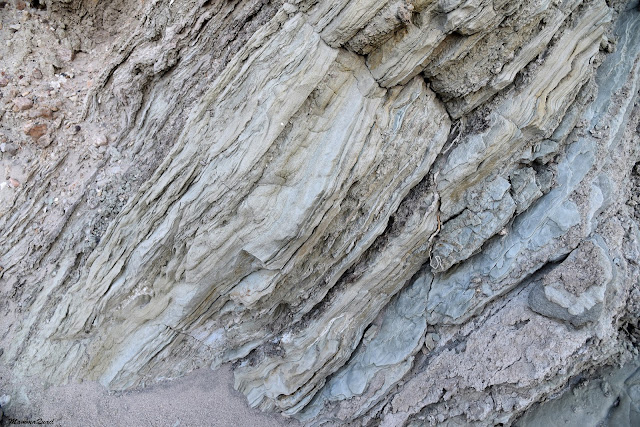 We caught up with the sunshine again as we neared the canyon mouth again, but the line of direct light was rising rapidly now.
As we made our way up to the campground I wished again to come back to this place. This time I voiced my wish. 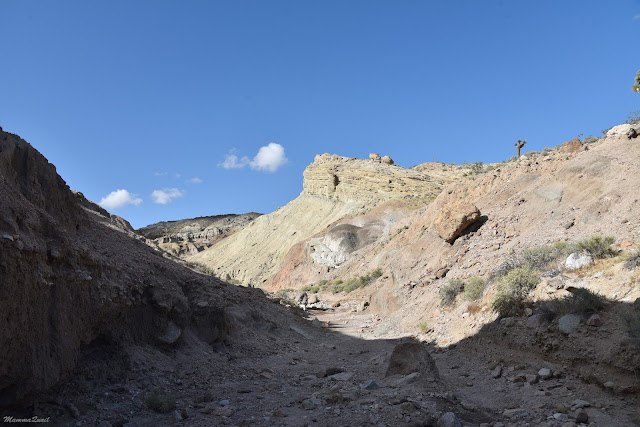 Pappa Quail agreed with me. He even suggested that we could camp at the Owl Canyon campground. The desert beauty and its quiet serenity really does grab one's soul.

Before long we were in the car, heading southeast toward Yucca Valley, on our way to visit one of the most beautiful and unique desert areas in California and in general: Joshua Tree National Park.