A New Trail of the Old Sacred Grounds: Hiking Down Mount Umunhum 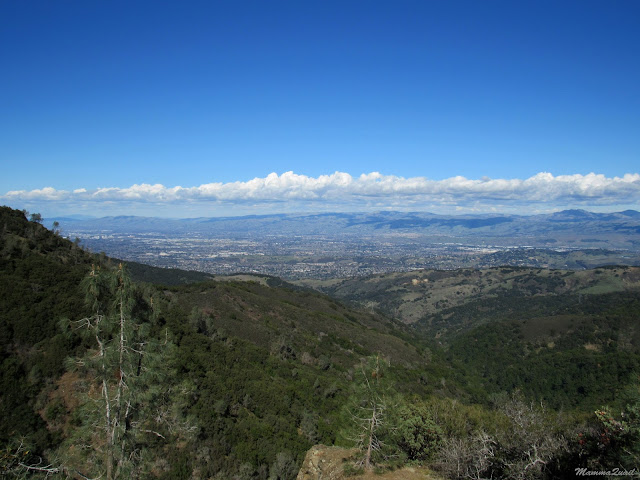 Some time ago I joined the mailing list of the Mid-Peninsula Open Space District. Then, I received a message that the Mount Umunhum trail is now open to the public. The chance to hike there came on Presidents Day after other plans we had for that day got cancelled.
It stands out, that mountain with the large cube-like structure at its top. Every time I drove down to San Jose I wondered what that place was. Each time I came to hike at Almaden Quick Silver I thought I'd check out the place.
It was very cold on the day of our hike. We took out time and when we finally got out of the house it was already noon. I wanted to go u and down but the chikas resisted and Pappa Quail observed that we might not have the time to walk in both directions. Reluctantly I agreed to go in two cars. We parked one at the last parking space we found in the Bald Mountain lot, gathered in the other car and drove up to the top parking area. From there it is a short walk up a flight of stairs to the actual summit.
Down below spread the entire Silicon Valley, framed by the East Bay hills topped by Mount Diablo.
The view from the mountain top was spectacular. The sky was clear and the visibility good. All around was beautiful view but it was to the east that I had my eyes and camera trained on. There, in full view, was Mount Hamilton, the tallest peak in the Bay Area and home to the Lick Observatory.
Mount Umunhum is sacred to the Amah Mutzun tribe of Native Californians. For two centuries they were barred from going up there. For many decades the general public was barred from going up there as well because the mountain top was used as a radar station, monitoring movements of Soviet aircrafts during the cold war. It wasn't just the radar building there at the time but an entire base with an active military community. When the place was turned into a park of the Mid-Peninsula Open Space District all the buildings were removed save for the radar building which was left as a memorial and historical site. Great care was taken and still is to restore as much as possible the natural state of the mountain top. The Amah Mutzun tribe elders were consulted and their vision was incorporated into the plan and implemented. A spiritual circle was constructed at the summit next to the radar building, where the tribespeople can now gather at will.

There is a trail in construction that circumvents the building and connect to the main trail down below the summit. This was not yet finished when we were there so we backtracked our steps and went down the stairs again to the parking lot from where we got on the trail downhill.


The trail starts descending from the southeastern side. Before us was the view of the Coyote Creek valley all the way down to Gilroy, and the mountain range south of Mount Hamilton where Henry W. Coe State Park is located. A month later I spotted Mount Umunhum from Henry Coe, the other end of the direct line of sight across the valley.
It was all downhill from there.
This trail is new, part of the park's making project. As we were going down we kept running into hikers that were making their way up. I started running about taking the easier way so Pappa Quail and the chikas hurried ahead, leaving me to sulk in the rear. 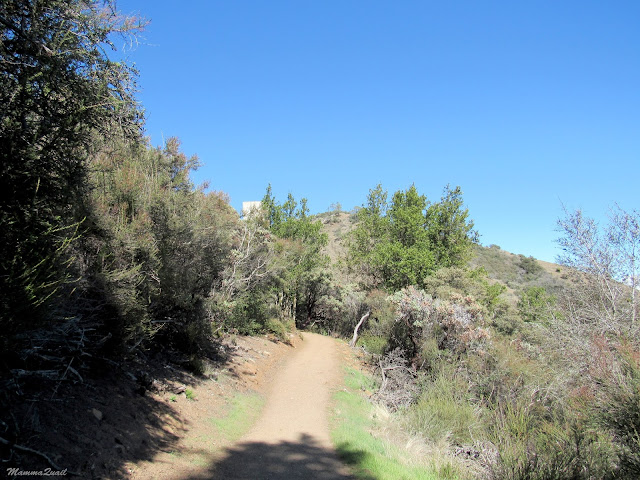 Soon we plunged into the forest, which in places was just a high chaparral. The chikas started complaining about the cold and I couldn't stop myself from saying that we would've been warm had we been going uphill.
Although we were going downhill and at a quick pace, I found myself lingering behind and stopping to appreciate the beauty around me.
I got to admit  that I too found it easier to pull my hands from my sleeves and operate the camera when I was out of the shade.
There weren't any annual wildflowers blooming yet but the shrubs were having their spring already. This one has a particularly lovely scent.
We found a sunny corner of a switchback and sat for a short break. Pappa Quail detected movement in the bushes and identified a cute little wrentit in the branches.
We were descending quickly, as expected on a downhill hike. Still reasonably high up the trail we could see a pretty looking observation deck. The chikas wondered if the trail goes there. I promised them it was. 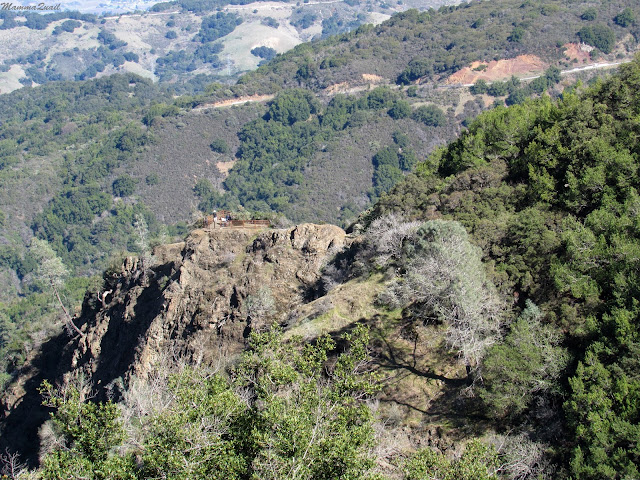 Lower down the mountain side the vegetation was denser and taller. The manzanita was replaced by its relative the Madrone.
In almost no time we arrived at the observation deck and stopped there for a little while. From there we had a clear view of the next peak to the south - the Loma Prieta.
We also had a lower view of Mount Hamilton, and could be duly impressed by its enormity.
Now there were taller trees on our way down, and more shade. Every time it seemed that the day was warming up a bit we were back under the canopies, shivering. And it was getting later in the afternoon. 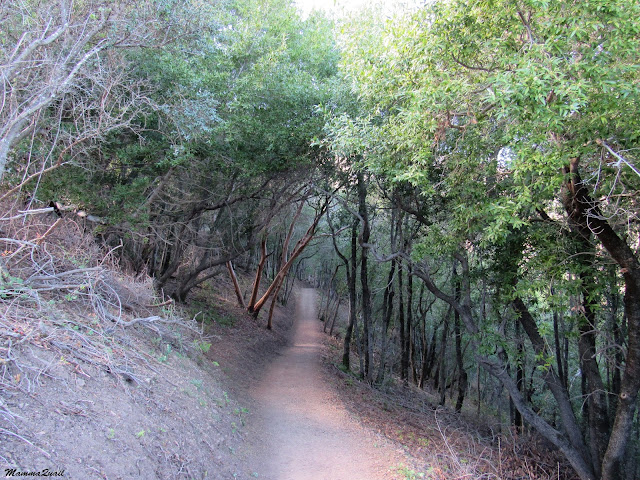 Under the trees however, I did find another blooming plant - the California man-root vine with its white, delicate flowers.
A bit further down -another early spring flowers: the baby blue eyes. A fitting name indeed.
Near the end of our trail I turned around and looked up at the mountain top with its signature man-made ornament. I prompted the chikas to turn around and look as well.
Pappa Quail suggested that I would walk back up to the summit and get the car we've left there while he drive away with the chikas. That was a sound suggestion but I passed on it. Instead I wanted to go on and hike the trail to Bald Mountain too.
On the last few yards of the trail I collected some red sights to post online. A fresh growth of California Laurel, dedicated and tender,
... the red, shod back of a Madrone tree, 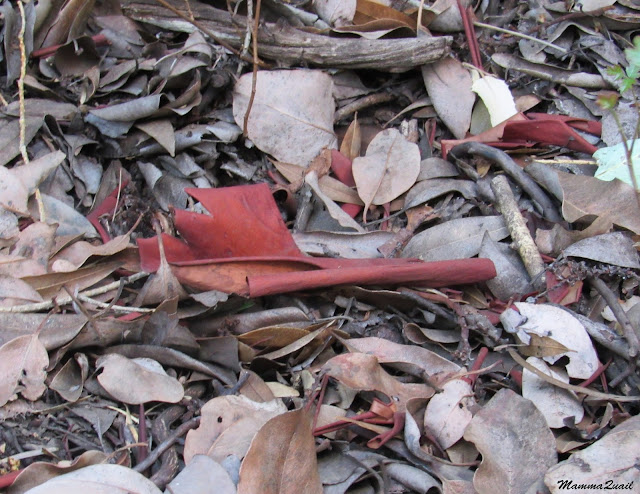 ... and the new spring growth of the lovely and dreaded Poison Oak.

We made is back to the Balt Mountain parking lot where I refused to open the car for the chikas, stressing that we were going to go on for another 1.5 miles to Balt Mountain and back. The chikas grumbled but Pappa Quail backed me and so we went on for the second part of our days hike, of which I'll post separately.
And yes, I do plan to go back there and hike Mount Umunhum properly - up and down.