The Table is Set: A Boom Bloom at the North Table Mountain Ecological Reserve 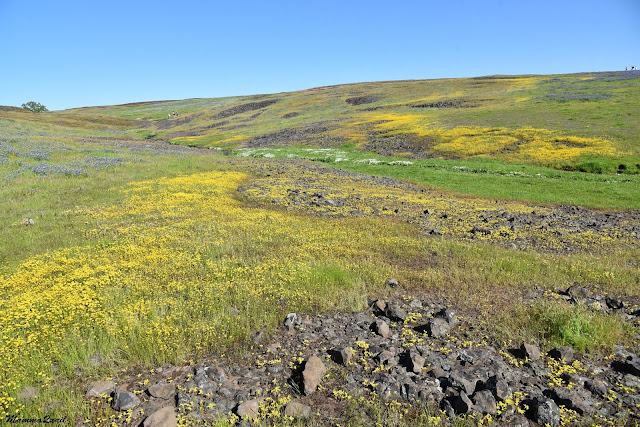 Last spring was a super bloom year in California. This year the rains came late and I already resigned to the thought that this spring will be just nice, not mind blowing. For some of the places of last year's boom bloom that is true, but thankfully other places more than compensate for it. After seeing the online posts with photos from Oroville's North Table Mountain Ecological reserve I looked for an opportunity to go there. That came last weekend when my mother came to visit me with her friend and I convinced them (with ease) that Oroville was the place to see.
We left home just before noon on Saturday and took our time, including a lunch stop, to get to Oroville. As we made our way along the narrow, winding road leading from the town to the reserve I got a strange feeling that we might not be alone there, as in our last visit. Many cars were parked along the road, indicating that the small parking area is probably full. People were walking up and down the narrow, shoulders road, slowing down our drive. Already I could see colorful carpets of wildflowers behind the cattle fences on either side of the road.
Perhaps it was because we arrived relatively late that we found parking fairly close to the trailhead, just outside the parking lot. It took us some extra moments to clear all the cars and people that were between ourselves and the reserve but when we finally made it through the (new) gate we stopped and stood there, gaping.

I have been at the North Table Mountain Reserve before and it was beautiful, but nowhere close to the colorful display of this spring.
The two most dominant colors there however where the backdrop colors - the dark basalt rocks and the intense winter green. This background made the perfect contrast for the wide carpets and patches of wildflower colors.
The main yellow came from the tiny inflorescences of the California goldfield. Between the rocks and in the shallow depressions was another yellow bloom - the delicate stonecrop.
Between the dominant flowers that made the unicolored patches hid many other wildflowers, in singles or in small groups. I tried finding as many as possible but only few made it here to this post.
There were also areas that were not dominated by any single species but a mix of several. Many were 'belly flowers'. The soil was muddy so I didn't go down to my belly for any of them. All of my photos were taken from above.
There is one trail that stretches along the creek that cuts through the meadow but people were meandering through the fields among the wildflowers. I remembered that last time we were there there was cattle on those fields. I was glad to see that the people were f`orly careful - not much seemed trampled. The exposed piles of basalt rocks helped - they made great stepping stones. 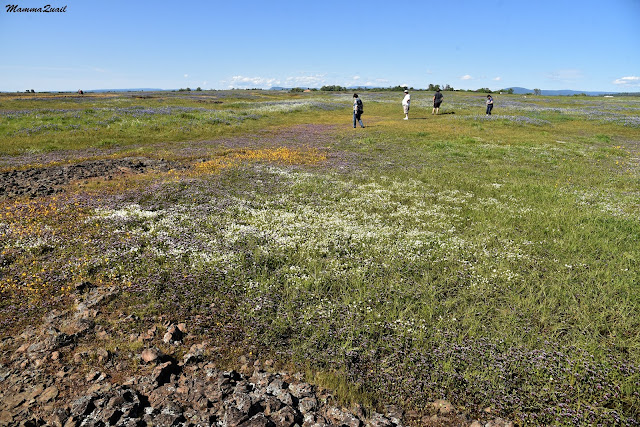 The first meadow we walked through was also the highest. Water was oozing from the ground all over the place, muddying the soil and collecting into little puddles and tiny brooks, flooding the narrow trail. 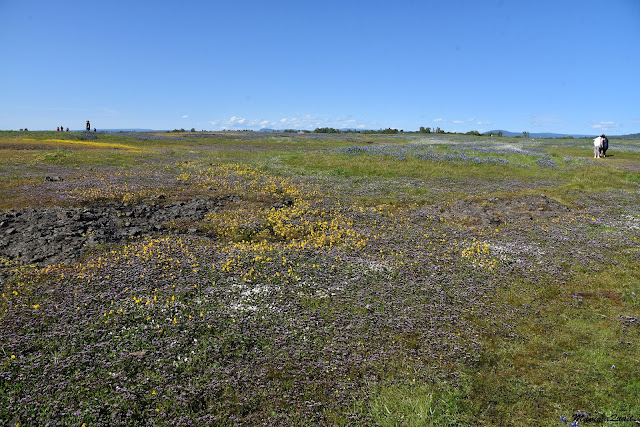 Wetter soil flowers bloom in theses flooded basins - the indian clover and the yellow monkeyflower made a wonderful purple-yellow color combination.
It took a while but eventually we stopped meandering and started down the trail. It was already left in the afternoon and I knew we wouldn't get very far but I wanted to get at least to the first waterfall which wasn't far away.
The trail followed the path of the creek and the creek banks were marked with beautiful white bouquets of snow-white meadowfoam.
While our progress remained slow, at least now we had direction. Even so I kept hopping from one side of the creek to the other to take a closer look at one flower or another.
It was hard to remain focused on the trail with all the pretty wildflowers around.
The creek, which was almost level at the upper meadow was now flowing faster, dropping in places in little cascade falls. 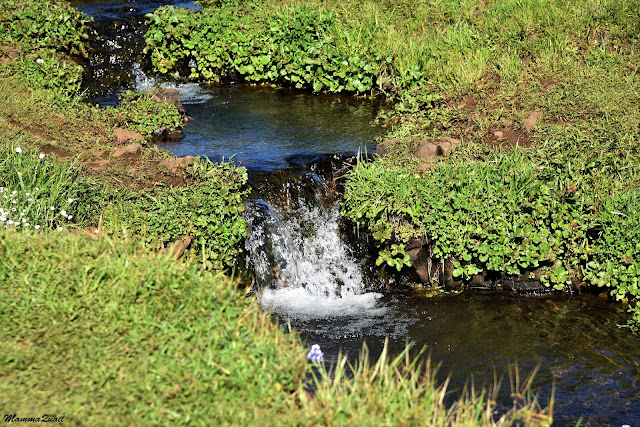 At the place where the trail remained above the mildly descending creek I had a nice view of the colorful slopes above the narrow glistening strip of water. 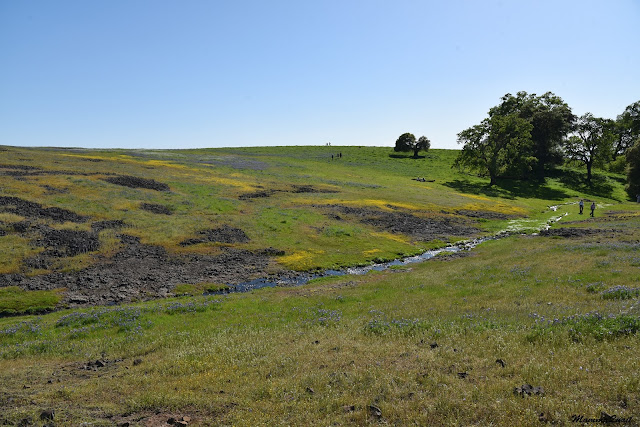 No longer flat, the Table Mountain features were more apparent and impressive - the dark, dry basalt surrounded by stonecrop and goldfields, and then the wetter soil flowers, lupine, cryptantha, and the green grasses. Each plant species in its own patch of soil mix perfection.
Whether by soil, precipitation, or weather, only few trees were growing up at the top of the Table Mountain. Wind-beat they looked graceful and venerable. Nearly all of them were oaks. 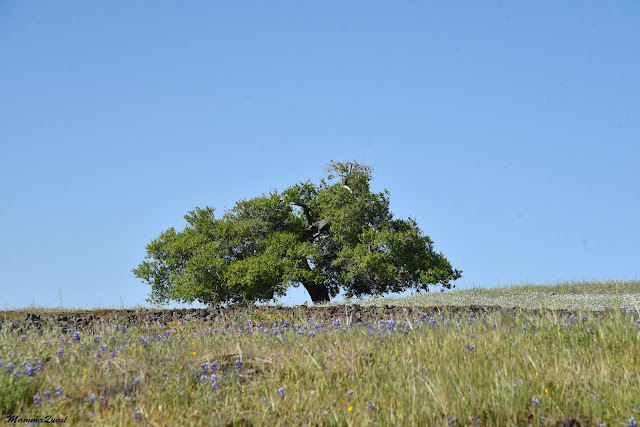 Other than flowers there were also lots of weeds. Non-native, invasive weeds. The monarch butterfly that fluttered by didn't seem to mind though.

My mother's friend drew my attention to a pink spot on the slope. A clump of owl's clover in between the sky lupine. These were the first owl's clover I've seen this season and I got very excited.
As we progressed down the trail I saw large patches of that very same owl's clover on the dry basalt slopes. There were many of them all over the place. 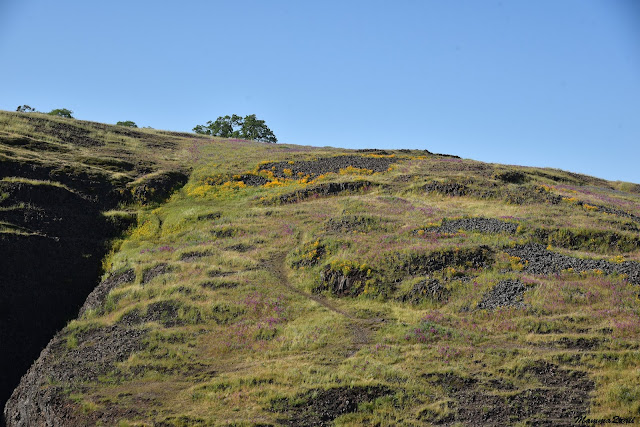 We reached the top of the waterfall. The trail narrowed and became steeper. My mother and her friends decided to stay up but I moved a little further, trying to get a good view of the waterfall. 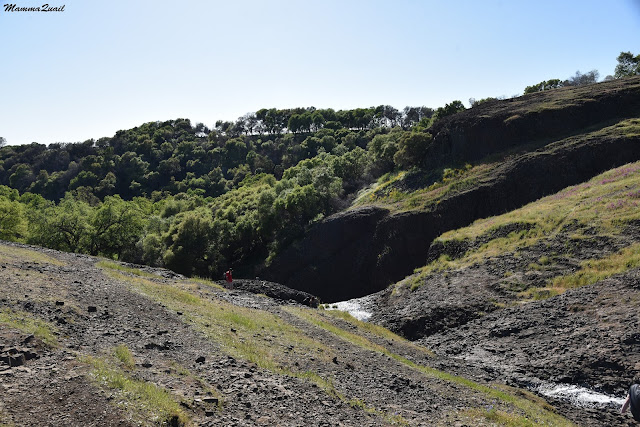 On my way I found out what those elongated buds I have seen near the rocks were. They were buds of clarkia. I found the first one that was open. All the rest of them were still maturing.
I also found another surprising wildflower there - one I didn't expect to see on such an exposed terrain. I usually see the woodland star in forests, but there it was - in full sunlight, under a mass of basalt rock.
I slowly paced down the trailand stopped at the corner of the first switchback. It was far enough to get a glimpse of the waterfall without getting too far away from my companions. There was more water falling there than the last time I was at that place, which was in April too.
I didn't go all the way down. Turning around I walked back up to join my mother and friend. On the way I found another pretty face :-)
And also other purple flowers that somehow I had missed on my way down.
I rejoined my companions and we started back along the creek. There seemed to be fewer people now, but new ones were making their way down, crossing our path. I now focused less on finding new wildflower species and more on the beauty of the landscape. 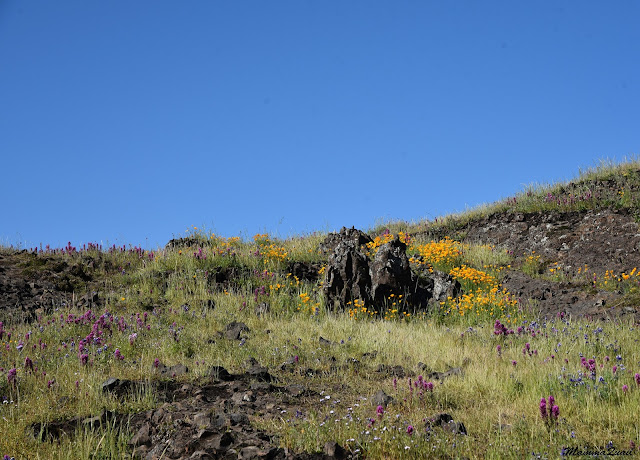 It was getting late and the sun was hanging ow in the western sky, making the flowers shine and more difficult to photograph. 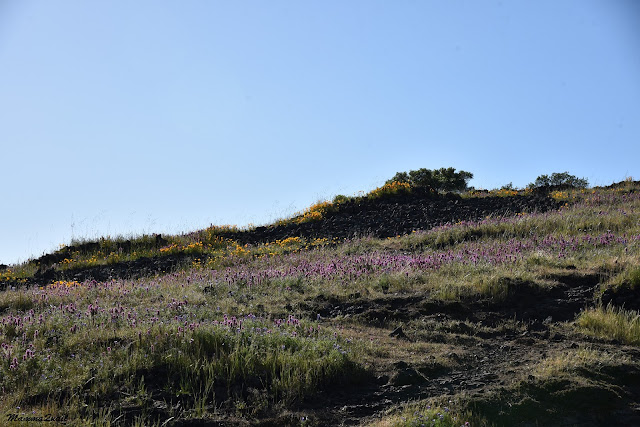 Well above the waterfall I resumed hopping back and forth both sides of the creek, trying to take it all in. I am well aware of how fleeting all this beauty is. A single heat wave can end it all. Even with no hear wave, this boom bloom will be over as spring turns into summer.
With the exception of the clarkia, nearly all the flowers I've seen there were at their peak bloom. I plan to return to this place in May but I doubt the display would be as vibrant. I hope it will still be spectacular though. Maybe other species will take over.
There were certainly fewer people in the reserve as we made our way back. At last I could take people-free photos of some nice creek nooks. 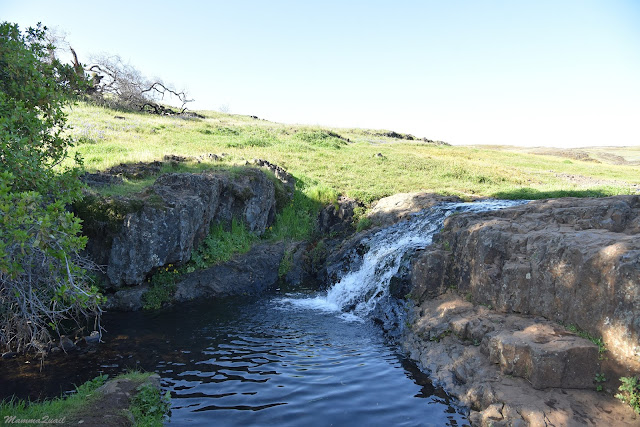 I aslo noticed some plants that might be part of the next wave of bloom. I'll check on this one next month.
My companions were impressed by the bright green algae growing at the bottom of the creek. The water was very shallow and the algae glistened in the almost direct sunlight.
There was a small grove of trees right at the place where the creek leveled off again. At the time we were going downstream there were many people sitting or walking between them but on our way back they were alone. The few people that were still there were, like us, making a slow progress up the trail. 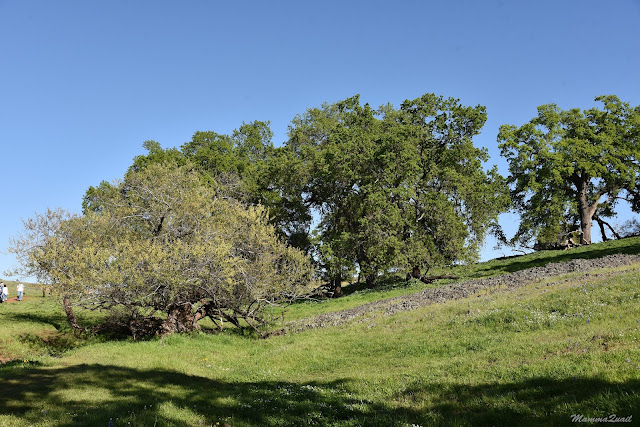 Nearly all the trees we saw there were oaks but there were some willows, and they too were blooming. Willow bloom isn't a colorful display but is very delicate and pretty.

Slowly we came back to the top meadow. Now there were many spots available in the parking lot. Cars were pulling out and heading back toward Oroville. We were heading in the opposite direction toward Redding. I felt very fortunate for having the chance to see this wonderful super bloom at the North Table Mountain Reserve. I don't think my spring would have been complete without it. 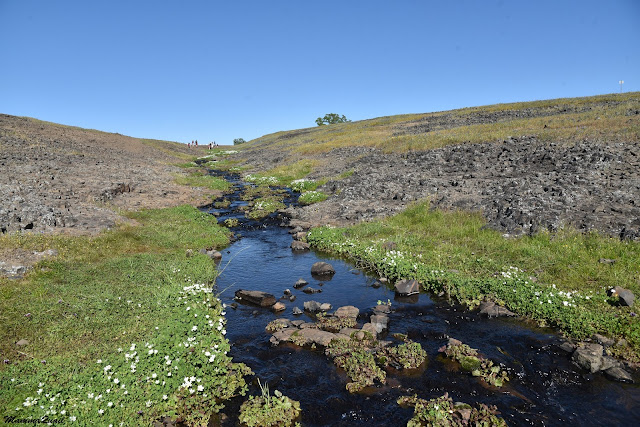