When Time Is Not an Issue: A Side Hike to Little Lake, and a Bit More.

My second night at the Dinkey Lake Wilderness was peaceful and restful. I woke up in time to see the sun rising through the trees. The air was silent and the lake was calm.
I took my time making and eating breakfast. Birds were chirping all around but I didn't get to see them. I did see the squirrels and little chipmunks running around. They didn't make it easy for me to photograph (a good sign that they weren't habituated on human food).
I tidied up the campsite and put everything away inside the tent or behind the bushes. Taking only water and some snacks I headed out to Rock Lake.
The day before when I walked from Rock Lake to the Second Dinkey Lake I passed a turn to a narrow, almost invisible trail and a sign directing to Little Lake. At the time I was set on going to the Second Dinkey Lake and building my camp before the inevitable thunderstorm so I passed that intersection without a second thought. On the morning of my third day at the wilderness I had the time and energy to go and explore that lake. Moreover - I could do so without carrying everything. It would be a quick and easy hike.

I headed down the trail with high energy and zeal. I walked about a third of a mile downhill when I realized that I had passed the trail intersection to Rock Lake and was walking the direction of the First Dinkey Lake, where I had planned to go later that day. 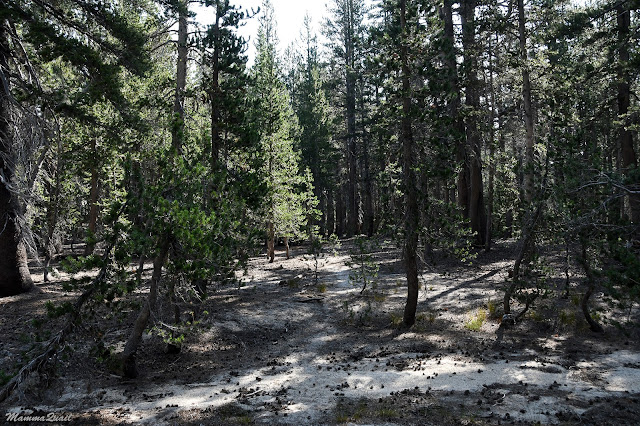 So I backtracked my steps, found the correct trail and started toward Rock Lake once again. The sun shone bright and strong but the groups of noisy youth who partied last night were sound asleep in their tents. All of them were sleeping, except for a couple of guys in a rubber boat in the middle of the lake. They noticed me and waved. I waved back and continued on. Just as I got to the trail turn to Little Lake I hear them hoot loudly - they had caught a fish.

The trail to Little Lake isn't used much. It is very narrow and most of the way it was hard to see and stay on it. Most often I found myself walking in the general direction of where I thought the trail aught to be only to find it some feet away to the left or to the right. Either way, I was heading in the correct direction - downhill.
It was a steep downhill. I couldn't help thinking about going up again that barely visible trail. I was glad not to be carrying all my gear on my back.
Down below I knew I was by the lake even before seeing the water - a wide belt of wetland greenery surrounded Little Lake. There were many interesting plants there, and I was glad to see again the now familiar Alpine Gentian.
Even before seeing the lake I could hear them - another loud group of campers. I saw them, and veered off to the side.
It wasn't easy to reach the shore. The water was low and a wide belt of slimy mud surrounded it. Carefully I managed to get near and take a good look around.
The mosquitoes swarmed around me, ignoring the thick layer of bug repellant on my skin. I found a place to sit neat the water, but couldn't stay there long because of the tiny insects that kept reaching for my precious blood. 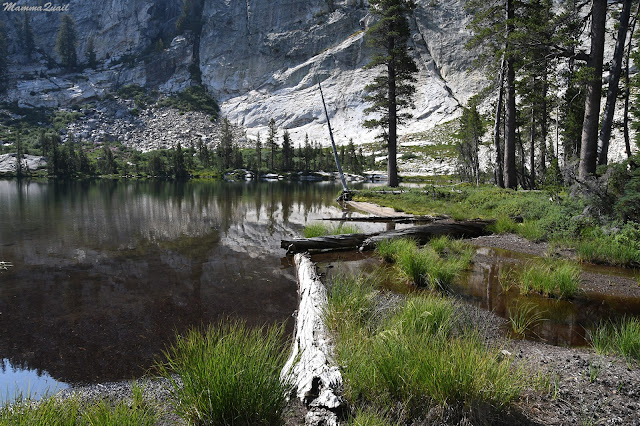 After enough swatting I got up and started pushing my way through the vegetation back to the forest where I had left the trail. 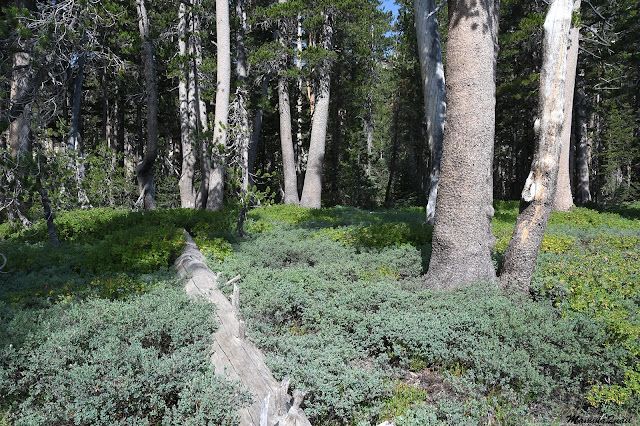 Finding the trail again wasn't easy. I hiked uphill in the general direction I came down from earlier, looking for the small cairns that marked the way. I did managed to find the path here and there and eventually I did make it up to the main trail leading back to Rock Lake. 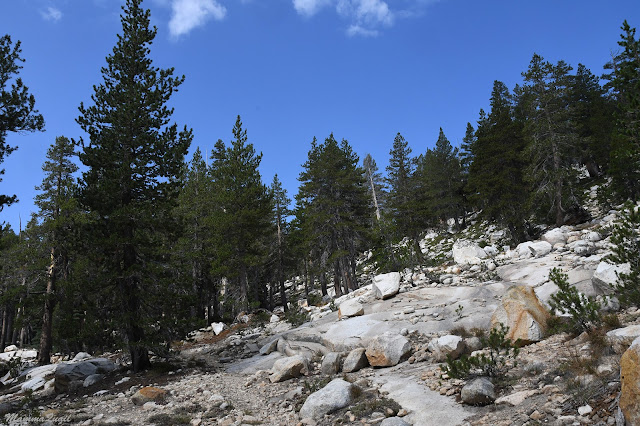 Along the trail I saw many clamps of narrow, cylindrical leaf rosettes. Some were reddish, most were green, some had dry inflorescences sticking out. The didn't look like anything familiar. I photographed a few of them for personal reference.
But then I came upon one that was blooming. A single blooming individual in the whole wide forest. A lonely flower with no one to pollinate. whether is was an early or a late one (probably the former) I do not know for sure, but I was happy to see that blooming one.
I passed rock lake on my way back to the campsite. The group that was camping there was all awake and busy now. They took no notice of me and I walked on, descending quietly onto the Second Dinkey Lake.
I had a quick snack, then folded my tent and packed up everything, hoisted my backpack, said goodbye to the nice and quiet Second Dinky, and started down the trail to First Dinkey Lake.
For about half a mile I descended through a thin pine forest. The trees were small and dark green. It was around mid day, beautiful and warm. A few clouds floated in the sky, but nothing threatening.
Down in the valley my trail connected with the Dinkey Lakes loop trail. I continued on it counterclockwise, heading toward the First Dinkey Lake.
The trail leveled off and out of the forest shade there were many more wildflowers blooming. Although the soil was fairly dry I could tell it wasn't dry for long. Water-loving plants like my friend the Alpine Gentian were blooming there, still looking healthy. Beside them - more dry-tolerant plants like the pussypaws, the Indian paintbrush, and wild parsley.
I didn't see it until I was right upon it - the Dinkey Creek, cutting through the little valley with a lovely and lively flow.
I crossed the creek on a few stones set there purposefully. In the water - small trout fish were hovering over the algae-covers pebbles, blending perfectly in the brown background, visible only when moving.

There were more flowers on the other side. Many more flowers, including some I had not seen before in bloom.
Knowing I would be walking this trail segment again today I did't stop all too frequently, but took quick shots while moving along. I was already starting to look for a place to pitch my tent. 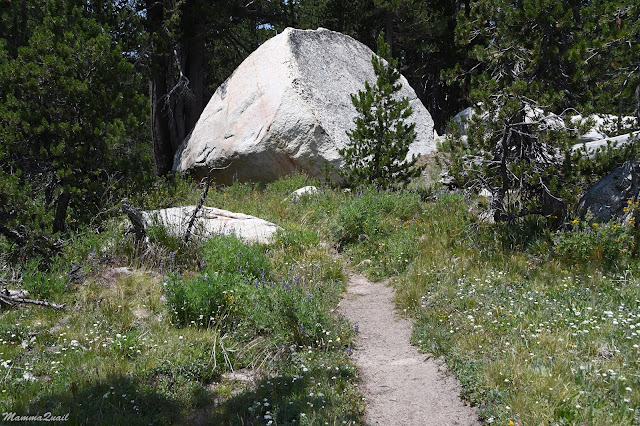 Already past their prime but still looking gorgeous - line bushes decorated the trail sides all the way up to the lake.
As I turned around the curve the lake came into view. East of the First Dinkey Lake was a wide, green meadow dotted with flowers. There was no trail there, and no access. I admired the pretty meadow from afar and consoled myself by imagining swarms of mosquitoes over the green grass (a very realistic image, that one).
Finally I was walking along the lakeshore. The trail wasn't very close to the water but here and there a narrow path was clear through the vegetation. Here and there a tent was visible between the trees to my right. At any place there I could camp, but I wanted easy access to the water and it seemed that all the good spots were already taken. So I continued along the lake.
A little bit further I decided to have a short break forest and snack. I sat down on a rock and looked about me. Long the numerous insects that buzzed around my head were pretty damselflies. I like their delicate bodies and the iridescent color of the male damselflies.
There was much more bloom near the lake. Many yellow composite blossoms, most of them I could not identify on a glance, and only a few I could identify after a long study off the photos at the comfort of my home while writing this post.
Easier to identify - the cinquefoil. Not too many look alike in that area.
Many butterflies fluttered through the air. Most of them didn't stop even for a second. Two of them, however, decided to engage in an activity different than foraging. I didn't get to see this lovely couple consummating because something disturbed the female (not me!) and she flew away. The male flew shortly after, although not in the same direction. Perhaps it was never meant to be. 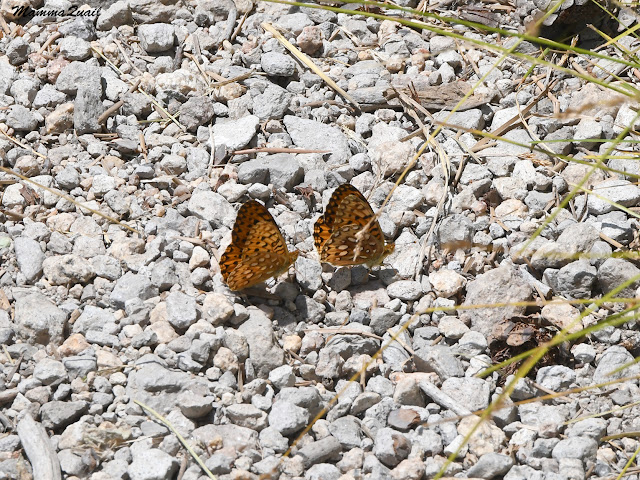 I came upon the intersection of trails where I had planned to turn away from the valley on the morrow. The area looked perfect for camping except for the signs posted everywhere that camping wan't allowed in that spot. I had to increase the radius of my search. Eventually I saw the perfect place: near the lake but not too close, a flat area for the tent, and a ring of stones with ashes inside - it was clearly a well used site. And it was not occupied.
I pitched my tent, placed the bear canister in a safe place, and looked at the time. It was afternoon now, and I had about six hours before nightfall. Plenty of time for hiking the Dinkey Lakes loop. I hoisted my backpack again - now much lighter after leaving behind my sleeping gear and the bear canister, and took of down the trail, continuing on the loop in the counterclockwise direction. About the Dinkey Lakes Loop I'll write in the next post.