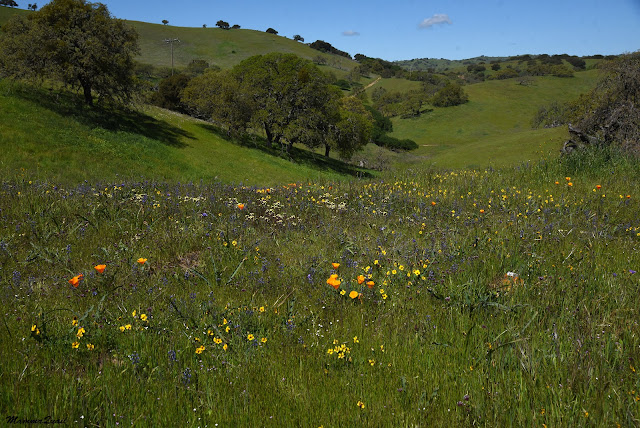 This is a great spring in California! Winter was good and wildflower superbloom seems to be almost everywhere, especially in Southern California. Unable to go and see the spectacle in person I took to drooling over pictures posted online by people who did.
Then Pappa Quail offered to watch the chikas on the next Saturday so I could go out and find the suer bloom. And I would have, but the prettiest superblooms were too far a way for single day out. Besides, why should they miss it? In the end I found an almost hidden add online about a wildflower event happening that Saturday at Pacheco State Park, near the San Luis Reservoir. The name seemed familiar to me and a quick search located the park off hwy 152 between Gilroy and Los Banos, in the hills right above the reservoir, only 105 minutes drive away from our home.
Pappa Quail was happy to go. The chikas took a bit more convincing, but on Saturday morning we all got in the car with our cameras and drove south.
When we arrived at the park we found that the guided wildflowers hike had already begun. The event itself seemed small, involving only a few booths of different organizations with information, some with kids activities. We chatted a bit with one of the park rangers to get information and suggestions of where to go and what to do. Meanwhile the elder chika found a rabbit, boldly hopping between the display booths.

Heeding the ranger's advice we set out on the same trail where the guided hike was going on. We passed the narrow gate into the green pasture area and almost immediately found that what seemed like a uniform green grass field was actually variegated with lots of short wildflowers of many different kinds.
The dominant color was yellow. Tall buttercups poked their lovely blossoms above the grass and as always, I had to take a hundred photos of them to get one reasonable image of that yellow on bright yellow flower.
We followed a narrow trail to a gap between the hills leading to a dry creek bed. The path was decorated by the lovely little orange fiddleneck.
There was something different about this hike than previous ones - this time the elder chika showed clear interest in flowers as well as birds. It started with the violets - her favorite flower.
She didn't stop at the violets but kept on photographing other wildflowers as well. She really is getting to be a good photographer.
We floppend the narrow path out of the pasture and up the hill along the creek. I was surprised that the creek wasn't flowing - with all the rains of late I was expecting to see some water there.
But water has been present there earlier, that was clearly evident from all the lush greenery and the colorful bloom.
Blue dicks, an early bloomer, dotted the hillside in lovely pinkish blue.
The old world grasses that covered the hills are clear enough evidence for the cattle-grazing use of this land but here and there were were more direct proof of the park's ranching past.
Although invasive weeds were pervasive there, many California native plants were showing nice, strong presence. Among them, the delicate California saxifrage.
A little further up the creek the trail widened into a dirt road. Protected in the gulch, green live oak trees and toyon bushes lined along the road.
The trees shaded a lush carpet of miner's lettuce, well into their bloom, like little gourmet stars served on a large shiny green plate.
It was around that pace where we caught up with the guided group tour. Most of the group members listened attentively to the naturalist's explanation about this plant or that. A few others were busy looking at birds that were active on and about nearby shrubs. Pappa Quail and the elder chika soon trained their cameras on those bushes as well.
We stayed for a little with the group but soon the chikas started moving on so we continued at a faster pace. As the trail rose higher up the hillside, the view opened up, revealing San Luis Reservoir below.
The group caught up with us and joined me in appreciating the beautiful deathcama that bloomed by the trailside.
Then the naturalist leading the group pointed at some yellow-flowering bushes higher uphill. They were at their season start.
A red-tailed hawk flew overhead, causing a minor stir among the birders in the group.
I don't remember if the naturalist said anything about the Lomatium that was blooming right in the middle of the trail, but I wasn't about to ignore it.
Once again we moved on before the rest of the group, and this time we stayed ahead fro a while.  The trail narrowed again, and after a steady climb we begun descending into a dry creek down below. 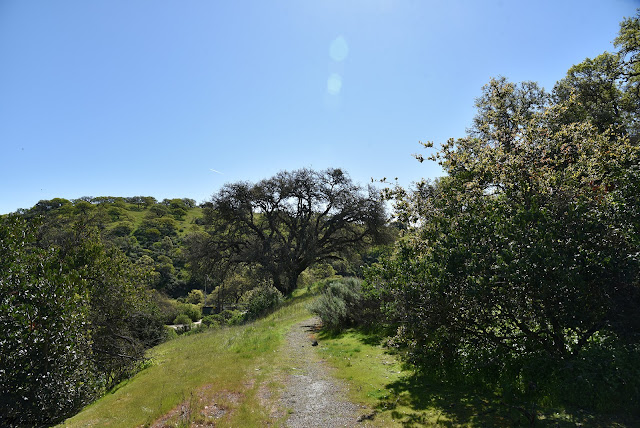 A small group of birders whom I though were part of the interpretive group hike split off and moved ahead as well. Pappa Quail and the elder chika chatted with them a little and also got some lovely photos of the bluebirds that posed on a nearby tree.
They found also a tiny hummingbird observing his territory.
As our trail descended into the canyon we were turning to face the south and our side of the slope suddenly was carpeted with goldfields, those tiny yellow composite that more than anything else give me the sense of the true California gold.
There were also some nice patches of the shootingstar flowers. They seemed much larger than those we saw before, and had a pale green stem. I remembered the naturalist saying that these were a different species but checking that out afterwords they seemed to be only a different variant. Most of them wore pink flowers but some were white. The prettiest one was to far for my camera but Pappa Quail got it nicely with his birding zoom.
I did have better success with the smaller, closer flowers, such as the almost unnoticeable tiny Collinsia below.
We reached a trail intersection and without much thought took the right turn. As it turned out the group went left. It didn't matter much because that part of the trail was the start of a loop. 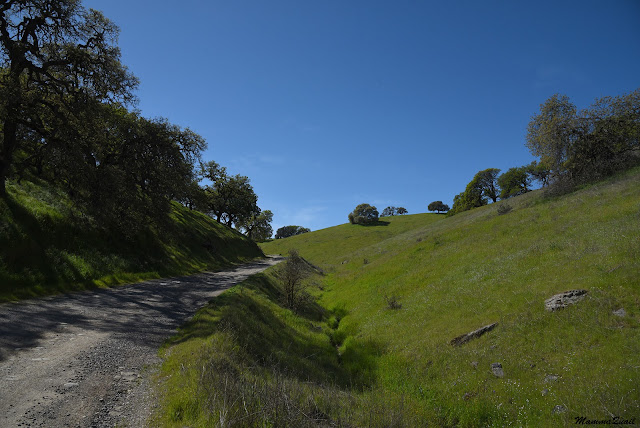 The small group of birders stayed behind, but not before sharing with Pappa Quail and the elder chika their excitement over spotting a Cooper's hawk.
They also found a cute little oak titmouse on the nearby now fully foliaged valley oak.
We were ascending once again. The trail was a wide dirt road that led us up the creek between two round grass-covered hills dotted with large valley oak trees. 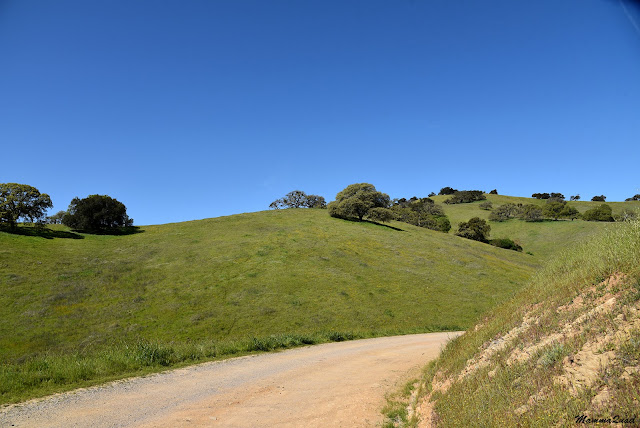 The grass was full of flowers, mainly fiddleneck and blue dicks. We saw some poppies here and there but not many. We started seeing butterflies flying around. 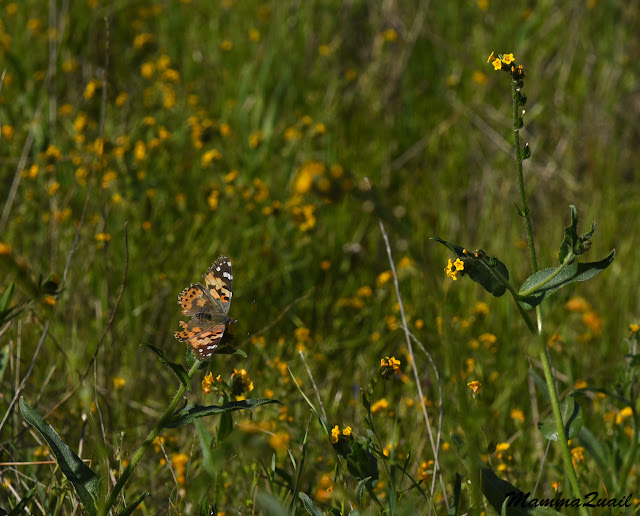 Occasionally the butterflies would land on a flower long enough for a photograph. 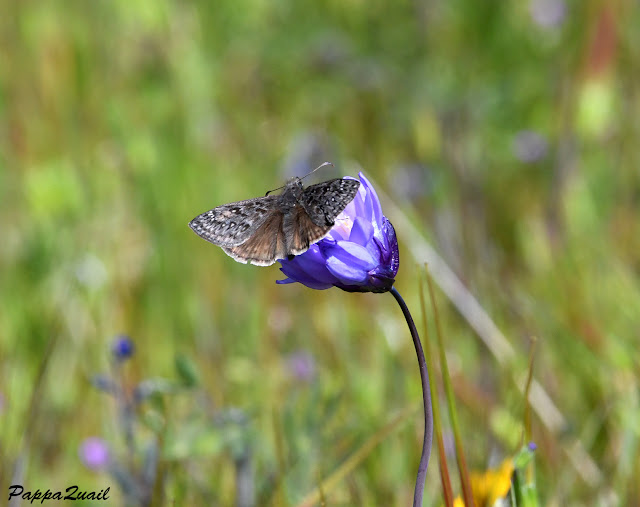 As we went higher other wildflowers became more dominant, painting the hills with patches of color, such as the blue lupine.
It is interesting that some whiledflowers seem more dispersed and some grow in tight patches. By that point I was able to identify a patch of a single species of wildflowers from a distance just from its general hue.
But those individuals which don't make large patches also got my special attention.
We reached the high point of the Dinosaur Lake trail and found the intersection with the trail leading back to the starting point. There we sat down for a break. The group we had left were coming up that trail, confirming that we had started the upper loop from the opposite direction to what was directed by the naturalist guide. 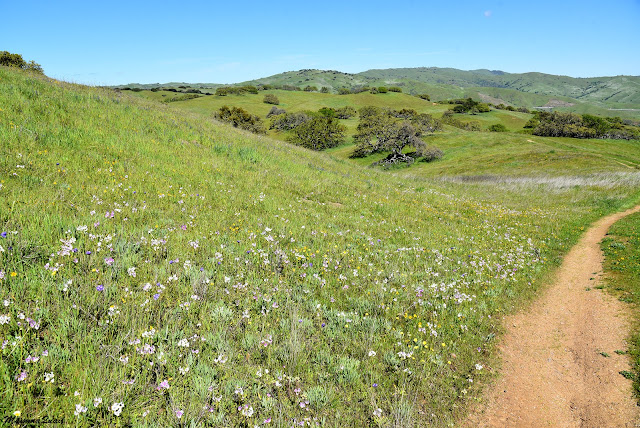 After a snack break we started down that trail. A bit down and around the curve to the east and suddenly the San Luis Reservoir came into view. And what a magnificent view that was!
We were now walking on the hill crest, heading back north. Until then we enjoyed the views, the spring greenery, and of course lovely patches and fields of wildflowers. But then we came upon one particular wildflower patch that looked as if it sprung from an artist's palette. It appeared as if all of the park's wildflowers and all of their colors were represented there. I was awe-struck and stopped to photograph. 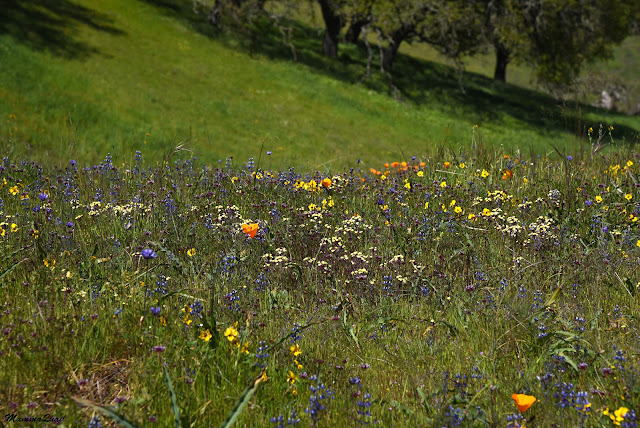 I took many photos of that rainbow patch, but the pretties composition photo was actually taken by the elder chika, who passed near me and snapped only a couple of shots.
After I managed to tear my gaze from the flowers and look up and away I noticed that I could see the snow-covered peaks of the Sierra Nevada from the trail.
We completed the southern loop of the hike, returning to the intersection where we had deviated from the interpretive hike. I started leading my family up the hill to complete the northern loop of the hike. A sign was posted there allowing access to park personnel only but the map and directions we got at the staging area were directing to that trail. By then there were plenty of other hikers walking there as well, not connected to the interpretive hike. 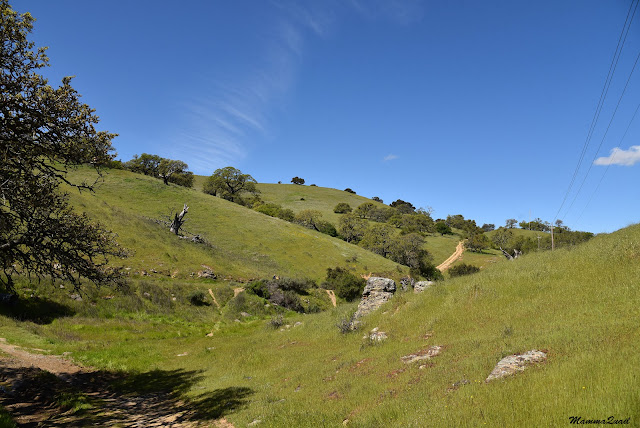 The chikas complained a bit about having to go uphill again. I ignored their complaints and enjoyed the magnificent oak tree at the beginning of the ascent.
Nearly all the trees there were oaks but here and there I saw others, such as this outstanding buckeye.
When I though I already saw all that was blooming at Pacheco SP that day I found yet another one.
Photos posted from Southern California showed vast areas of poppy fields, so intense that they are visible from space. We have seen it once, at the Figueroa Mountain area. I was hoping to see many poppies at Pacheco. Maybe not as vast fields of them but more than an occasional patch here and there. But on this bloom time, however, poppies were taking the back seat. Still, there were those pretty orange patches of California poppy that made me smile and feel that everything is good. 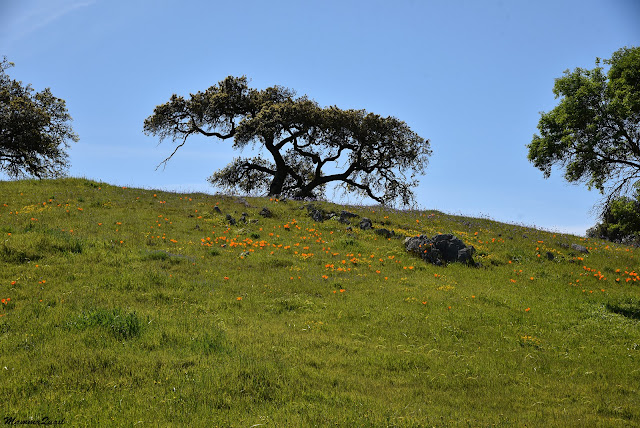 As we descended back into the pasture where we had started our hike I noticed the red maids flowers which were closed in the morning hours and were now open in the bright afternoon sun.

Many people were walking along the arrow paths through the pasture, going on or coming back from the wildflower hike. We arrived back at the staging area and while the chikas explores he activities offered at the various booths Pappa Quail and I compared notes with other hikers and the rangers. As we got ready to wrap things up and head out of the park the birders in my family spotted a lark spray near the parking lot. It is very pretty for a sparrow, Pappa Quail told me as he handed me the binoculars. Indeed it is.