When we decided on the San Diego area as the destination for our Thanksgiving break Pappa Quail knew immediately that he wanted to visit Border Field State Park. It is one of the prime birding spots in the Southern California coast.
At the time of our trip approached we were getting concerned: the news reported of a large caravan of refugees was approaching Tijuana from the Mexican side of the border. According to the media they untended to storm the border fence. As the tensions increased, we wondered if the park, which is right at the Mexican border, was even going to be open for hikes.
Since no notice of closure appeared on the park's website that morning we decided to go ahead with our plan and visit there.
The road to the park was suspiciously empty. There was hardly any traffic there, civilian or otherwise. A few small farms lined north and the entire area appeared to be slumbering.
We arrived at the park and found that we couldn't drive inside. We parked at a gravel parking lot next to a few other cars and walked down the road, past the unmanned gate booth.

Pappa Quail spotted a bird almost immediately - an American Kestrel parched on a  pole. It was pretty far, though.
The soil near the road was wet and a pretty yellow butterfly was busy sucking moisture from it. I took a few photos, then waited for Pappa Quail to take better images with his birding, powerful zoom lens. 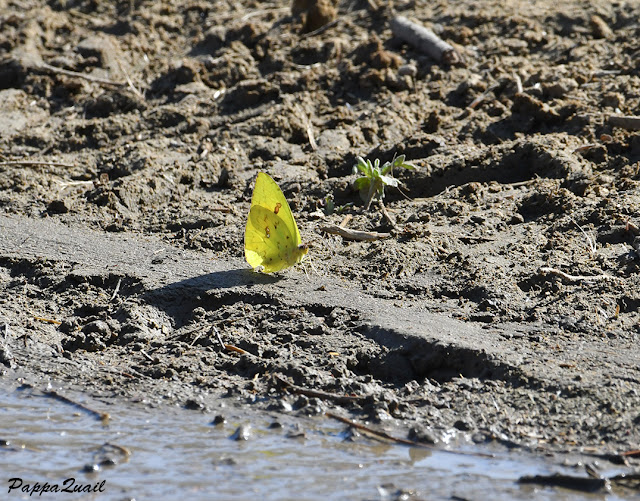 Border Field State Park is flat. There's a large, slough-fed salt marsh and a long, beautiful beach. There's also a hill at the southeast side of the park but we were heading directly west - to the beach.

We walked down the road along with a few other people who bothered to get out of their home that day. Soon we came to the trailhead of the trail leading directly to the beach. The road curved to the south and we started down the trail. 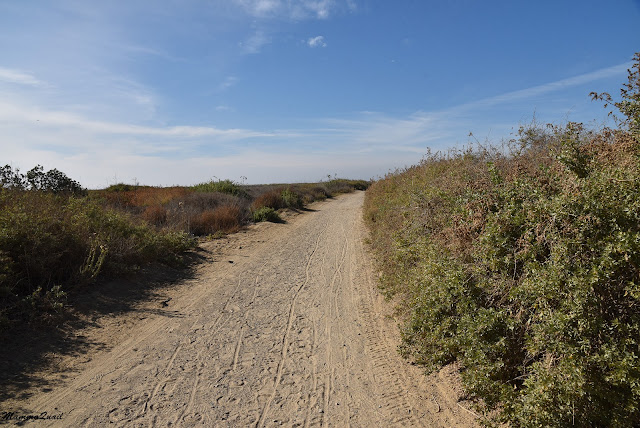 The emptiness, vastness, and lack of human activity in the park stood in contrast with the high rises of the city of Tijuana that loomed to the south of us, just across the border.  As we walked down to the beach I kept turning my head to look at the city, fascinated by the close proximity to another country. The elder chika was doing the same, but she was much more vocal about her desire to cross the border and visit Mexico and was bummed when we told her that it won't happen on this particular trip.
We came upon two border patrol vehicles that were parked in a wide dirt clearing. the drivers were sitting in the cars, their windows rolled down. They were eating their lunch and chatting, appearing all casual. They directed us to the beach and informed us that there was no problem whatsoever in hiking any trail in the park, even the one that's right at the borderline.
We crossed a salt marsh area that was barred from the ocean by a low ridge of cream-colored sand dunes. A narrow slough of slow-moving water meandered through the marsh. 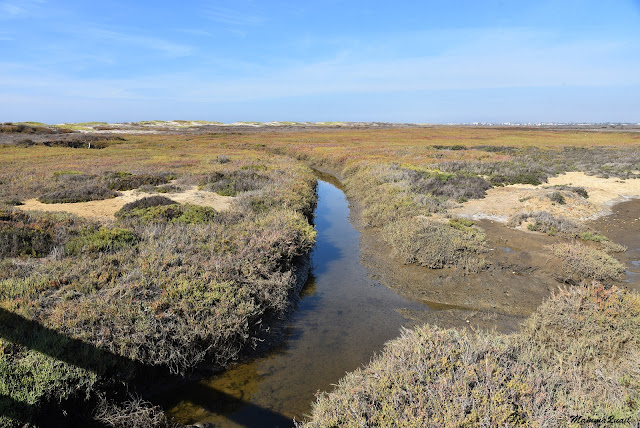 There were no birds wading the slough mud despite the bounty of snails that crawled about. 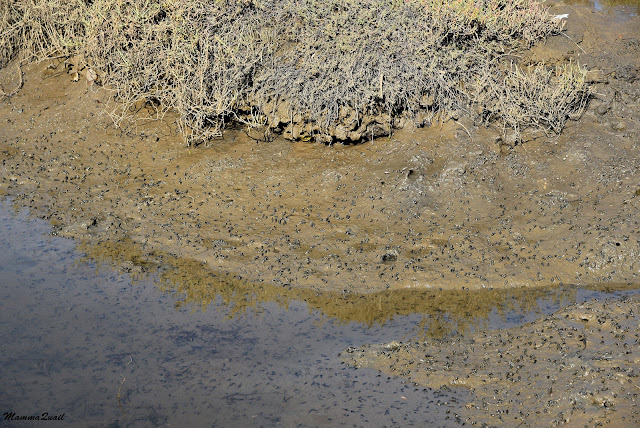 Pappa Quail and the chikas were eager to get to the beach and hurried along down the trail. Bit I saw something that made me stop in my tracks: flowers! The sand verbena was blooming. Not at it's peak, but blooming nonetheless. I was thrilled.
I finally crossed the dunes and looked around. The beach was flat and long, stretching from horizon to horizon with almost no obstructions, save for the border fence on the south. No rocks were sticking out of the sand, no curvy little bays or pony headlands protruding inland or out in the water. The ocean lapped gently at the sandy shore and as expected, many shorebirds of many different species and sizes patrolled the strand line, searching for morsels between the waves. 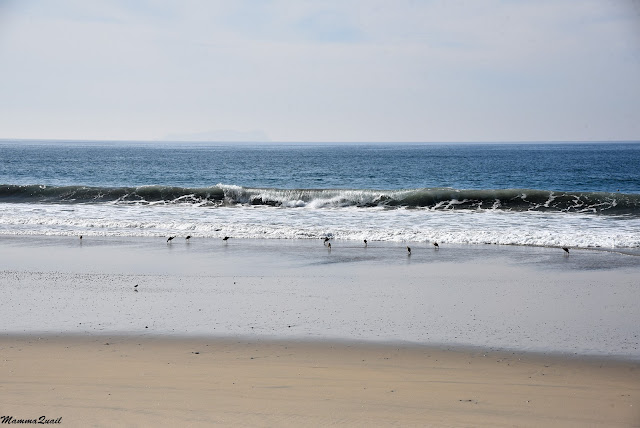 A large wooden old wire roll was stranded on the beach, its cracked filled with sand. Pappa Quail and the chikas were sitting on it, the chikas munching on their snacks and Pappa Quail training his camera on something in the water. When I approached he directed my attention to what it was - the dorsal fins of dolphins that were popping through the surface whenever the dolphins came up to breathe.
After finishing their snack the chikas went to play in the shallows and Pappa Quail started stalking the shorebirds.
I continued sitting on the wire roll for a while, enjoying the sight of my family enjoying themselves, and observing the birds through the binoculars. There were many of them, all running around in the wet strand line, poking for morsels, escaping the larger waves, passing each other on their way to and fro, but rarely interacting with each other. Each species had its on leg length and beak length, allowing them to occupy different niches in the same habitat. Very cool.
I also gazed at the border fence with my binoculars, trying to see if there was any activity there. The media had described a scene of mass desperation and chaos, and multitude of people climbing the fence. When we were there however, there wasn't any action going on. None at all. There was one person sitting on the fence but he looked more curios than desperate, and he didn't attempt to jump to the U.S. side. We saw a few people swimming out in the ocean way past the edge of the fence. Had they wished, they had no problems simply swimming north. There was no border patrol, nor anyone else official-looking on the U.S. side of the border. The only people on the north side of the fence were a few park goers - families with children. And us, Quails.
Nearly all the birds we've seen on that beach were shorebirds of one species or another. There were a few others, however. An occasional gull, she pelicans, and terns. Here, in its non-breeding plumage, a riyal tern looking more like balding man, observing motionlessly the bustling shorebirds around it.
Eventually we decided it was time to continue our hike so we started walking south along the beach. The elder chika picked up her camera and started photographing birds as well. She also too one of the nicer wide shots of the pretty beach. 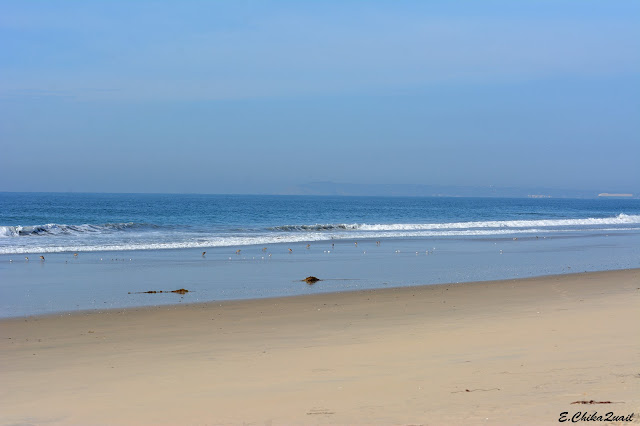 Having made it to the strand line myself, I got to look for beach treasures. And there were plenty of them there, just lying around on the wet sand.
Of course, what might seem a treasure to me might not be so for others. Of my family, only I hold fascination with algae.
As always, Pappa Quail was looking for the birds, and he was getting lots of nice shots of them.
Border Field State Park really is a birding heaven, especially for shore birds. Birds naturally, do not acknowledge human-made borders. They fly as they wish and spend their time foraging on either side, pleasing U.S. and Mexican birders alike.
There is something very relaxing about bird watching. Even I, who am primarily into plants and wildflowers, got some of the bird-watching bug rubbing off onto me from Pappa Quail and the elder chika.
In fact, after years of not being able to distinguish one shore bird from another, I am finally able to tell a few of them from the rest. The dowitcher is one of those I can identify.
What I didn't have that day was a strong zoom for my lens. As we neared the fence I did get a better view of the city on the other side. The contrast between the populated city and the vast emptiness the park was striking.
The elder chika got a nice shot of that curlew, although she was right next to me and no nearer to the bird.
A group of young men came running past us from north to south. They neared the fence, then turned east and jogged on the road parallel to the border. I took the time looking at some colorful shells when I heard Pappa Quail call me with excitement - he had spotted snowy plovers.
I took one last sweeting look at the pretty beach then heaved a sigh and walked over to the dune where Pappa Quail and the elder chika stood, clicking their cameras like crazy. 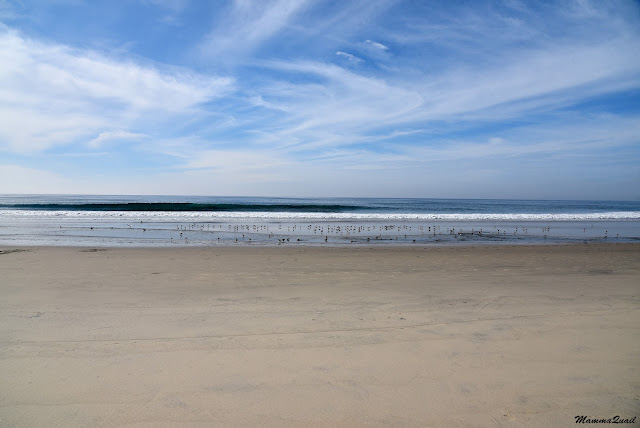 Snowy plovers are an endangered species that after suffered a serious decline due to habitat loss is now making a comeback, thanks to preservation efforts. They are tiny, almost completely camouflaged birds, that can be detected by the untrained eye pretty much only when on the move. We've seen snowy plovers at a few other beaches along the California coast, first time being at the Oso Flaco State Beach. Nearly always these plovers wear leg bands. Of the two individuals we've seen at Border Field State Park, only one was sporting the leg bands (which Pappa Quail reported to the authorities that keep count of these birds). I chose to post here the image of the landless one.
We cut through the dunes to the paved road and started walking back. Before long we came upon a flooded section of the road where the Tijuana River overflowed, being the reason for the road closure.
Unlike the slow stroll we had on the beach, now we were walking quickly. We didn't see many birds there, save for a few little bush birds.
We did pause to look at a large dragonfly perched on a branch, hanging on to what appeared to be its old nymph skin.
For some distance we walked fairly close to the border. It appeared that the new border wall was being built, not waiting for any public debate to be resolved. The new wall was being built some distance away from the border fence. The buildings of the Mexican city were right at the border fence, every bit of land being used. While most of the buildings appeared to be new tenement complexes I did see some single home houses with large yards and nice gardens. It really looked like many cities in California, only less sprawled.
It might seem from this post that we spent a lot of time gawking at Tijuana but really our main objective was a nature hike, and there were more birds to see on our way back to the parking area.
At the parking lot I paid closer attention to the decoration of a fenced area (what it fenced I cannot recall - some utility stuff). The decoration was of mosaic stepping stones with desert and native elements. I thought it was really pretty and colorful. It certainly made the fence nicer to look at. 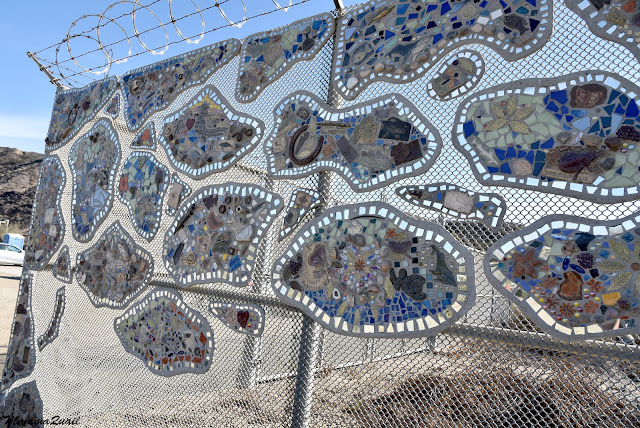 We didn't have much else planned for the day. there was one more birding hot spot in Chula Vista we wanted to visit, but otherwise, we were ready to move on.
I drove slowly in the quiet road leading from Border Field State Park to the Tijuana River Valley Preserve when something large and blue crossed my field of vision. I slammed the breaks and pulled over, shouting with excitement - what flew across the road was a magpie jay, one of the biggest on our wish list for this trip.
We all got out of the car. Me with the binoculars and Pappa Quail and the elder chika with their cameras. The younger chika was less enthusiastic about seeing this magnificent bird but she did eventually, if somewhat reluctantly, come along to take a look.

The magpie jay is the largest jay in California. This species has a stable population in the southwestern part of San Diego County. The black-throated magpie jay is pretty much endemic to northwestern Mexico, and the southmost tip of California. It was a real treat to see them.