Checking out the Neighbors: A Leisure Hike Around Spooner Lake

When our friends visited us last August we started our big California trip with three days near Lake Tahoe. On the second day Pappa Quail and the chikas joined us for an amazing hike of the Round Top-Winnemucca Lakes loop trail. On the the day they were to return home, but before that we wanted to do one more hike together. After yesterday's strenuous hike we all opted for something easier and, considering the long drive that would follow we also wanted the hike to be reasonably short. Choosing to take the eastern route we crossed over to Nevada and stopped at Spooner Lake.
At the gate to the park we've been told that there was a special event going on there and that there wasn't any parking space left. We were directed to a gravel lot outside the park where we were to leave the car and enter the park on foot. No problems, that's where we started our round the lake hike.
We descended into the park through a young forest, joined the loop trail and turned left, going clockwise around the lake.
We've hiked this trail before, nearly a decade ago. I don't remember much from that hike (nor did we take many photos then), but I do recall that it was very dry and dusty then. It was about the same time of year - mid August, but it must have been a drier year back them.
It was much greener this time around, and considerably less dusty. There were also some wildflowers blooming.
It was a big contrast with the hike we did yesterday at Lake Winnemucca. Here at Spooner Lake there was no sign of the chillness, the snow, or the spring super bloom that we experienced just one day before. It was hot and there was no hint of snow. There was some bloom, but it was way past its peak.
Nearly each plant we've seen blooming along this hike was bearing more fruit than blossoms. Summer was nearing its end here.
The lake, however, was full, and was a pleasure to see. Spooner Lake is a reservoir, built in the late 1800 to provide water for the Comstock Lode miners in Virginia City and the surrounding area. Now it's part of the Lake Tahoe Nevada State Park and is a site for recreation.
Across the water we could see the pop-up tents of the special event we were told about. We would soon find out what it was for we were headed in that direction.

We emerged from the woods and followed the narrow trail around the curve and through what would be a dry marsh area. This area would be flooded in spring and early summer but now the ground was dry and we crossed the small wooden bridge just to not step on the fragile soil and damage the vegetation. 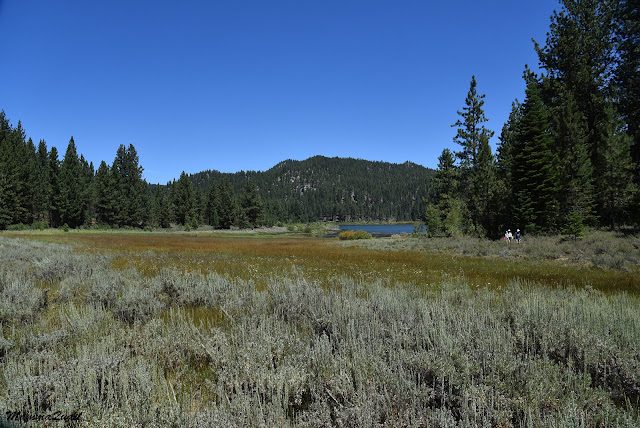 there were small 'islands' in the marsh where more 'landish' plants were growing, such as rabbit brush and groundsel.
It was a good day for butterflies and many of them were flying around us, inspecting the vegetation in a touch and go manner. Even if one did pause for longer than a split second, it would move its wings the entire time.
Coming around the curve we pulled away from the lake surrounding trail for some time and stopped at the picnic area for a lunch break. There we sat for some time, eating and looking at the other park visitors coming and going between the parking area and the tents by the lakeshore. The squirrels run around between and on the trees, unhindered by the human traffic.

From chatting with some of the people we saw there we figured out that the tent area at the Spooner Lake was the finish line for a few long distance races. So that's what the special event was.
After our break we went down to the lake again and continued our hike around it. 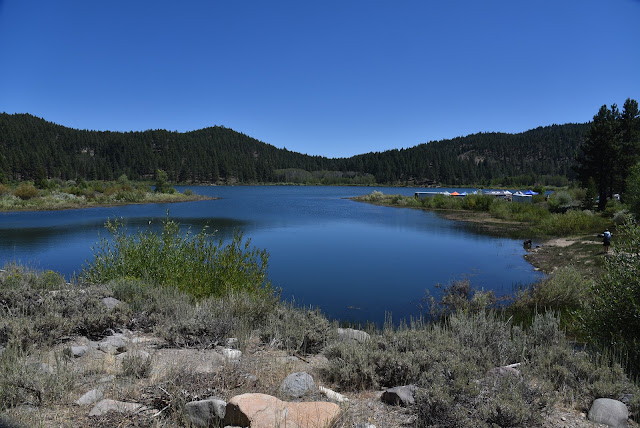 Closer to the water we could see a few water fowl. I expected to see more, but even a few geese and the occasional grebe were nice to see.
The trail around the lake is only 2.5 miles but somehow it felt longer. Perhaps it was the heat, or maybe it was the fact that many people were sharing the trail with us that day, and all of them were walking faster than us.
Because I try in this blog to document also rare natural phenomena I posted the below photo, documenting the chikas in a rare moment of mutual respect and mature discussion. 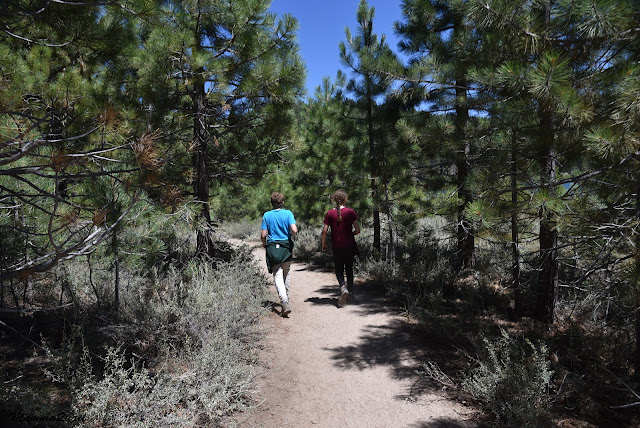 Going round the north curve of the lake I noticed a layer of reddish vegetation floating on the lake. I wondered if that was algae. It was too far to tell and from where we were there was no getting closer to that shore. 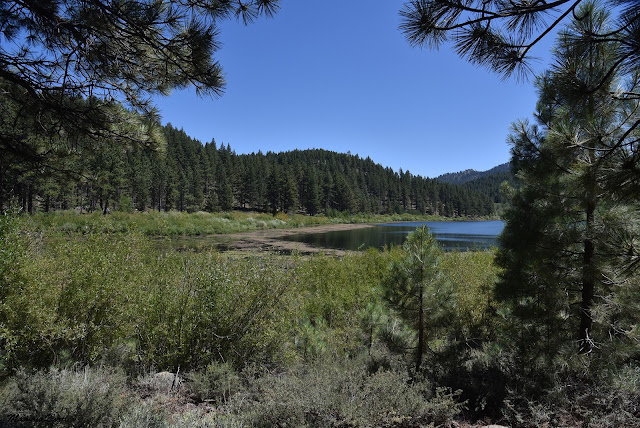 Once again now we were hiking in the woods. Every now and then the trail would exit the trees and we would walk a short distance out n the open.
On one of those open spots Pappa Quail and the elder chika had spotted a bald eagle on a far away tree. It was a very exciting sighting and we stopped there for some time, taking turns with the single set of binoculars we brought along. When the binoculars were in other hands I focused my attention on the local vegetation.
Between the pines and the lake was a thick belt of willows. Little bush birds chirped in the willows and sang as we walked by. 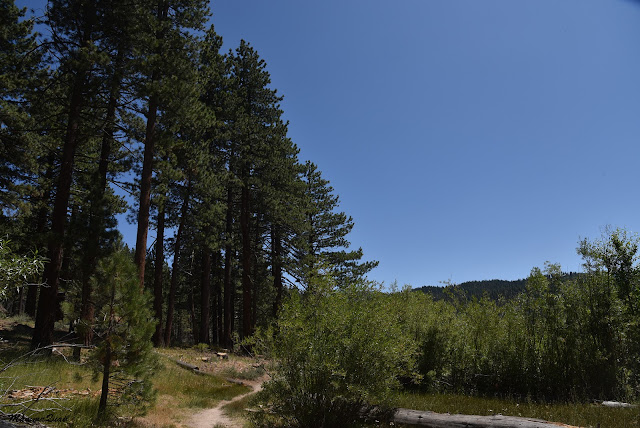 One of these birds made itself visible for a little while, perching on the outer branches of the willow.
We were walking south now, along the eastern shore of Spooner Lake. There were a few more blooming plants there. None that I haven't seen before, but nice to see nonetheless.
Back in the trees the squirrels were running around, going about their business. We saw plenty of the mountains resident golden-mantled ground squirrels that day.
Chipmunks were also very active along our trail but they were harder to spot and to photograph because of their smaller size and better camouflage. The elder chika got a photo of one, peeking through the undergrowth.
It was much easier to get a closer look at the wildflowers. They were easier to photograph too.
We continued southward along the eastern shore of the lake. There were many other hikers there that day, hikers unrelated to the big race. We chatted with some and one of them informed us that they too have seen the bald eagle, and that it was flying over the lake. 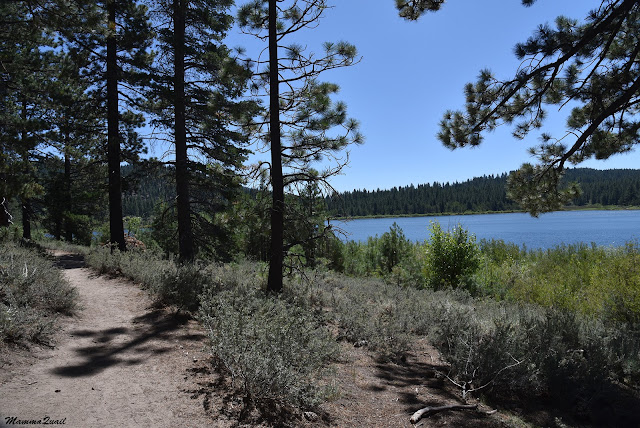 As if answering a summon the eagle appeared in the sky, gracefully gliding beneath the big blue. We stopped there for a good long while until Pappa Quail and the elder chika got weary of photographing it and everyone else in our little company have had several turns using the binoculars.
The trail brought us closer to the lake. The thick belt of willows still separated us from the water but quaking aspens replaced the pine trees on the other side of the trail. 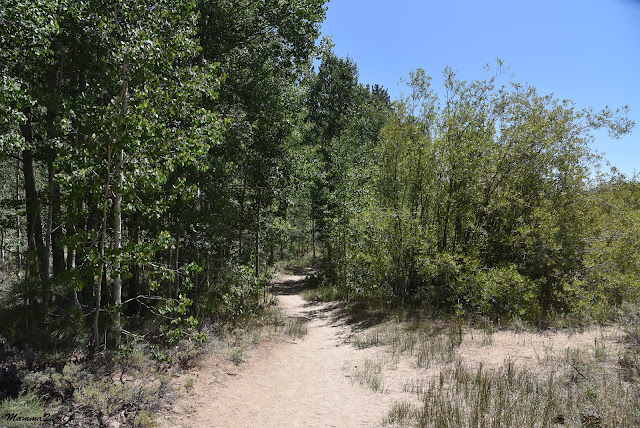 As we neared the southern curve of the lake and closer to the closing of the circle I saw once more the reddish blanket of pond plants. This time we were close enough for me to see that these were no algae but flowering plants. 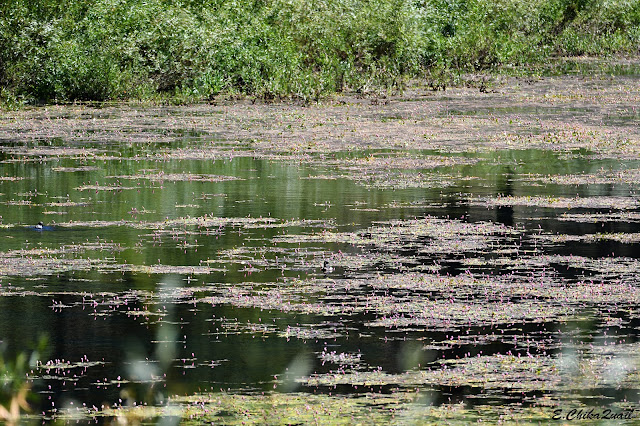 I grabbed Pappa Quail's attention and he produced me a few high zoom photos of the floating flowers.  While every other bloom on the park was past its peak, these pondweed were just beginning.
I found a path between the willows and made my way down to the water. I didn't stay long enough to explore all that was there to see because the others were waiting for me on the trail and they were eager to go on so I had a quick look around and turned back to join them.
The wind picked up, shaking the aspen leaves. The trees wore their summer green so I had to tell our friends how they look like in the fall - like trees of gold coins.  I love quaking aspens and I was chagrined to see that many of them had their trunks were vandalized by graffiti carved into their smooth, white bark.
An osprey flew over us, carrying a fish in its talons. I looked behind it but no eagle was chasing it to rob the osprey of his catch. We got lucky as well because the the lucky bird had landed on a dead tree and started tearing at its meal in full view. We observed the hungry osprey enjoying its meal for some time before moving on. I believe it got to finish its meal without any harassment from the bald eagle.
We were very close to the closing of the loop trail and I was ahead for a change, when the elder chika called me back to photograph a moth she found. I was already weary and hot and I didn't want to backtrack for a moth. When looking at her photos I regretted not having gone back because it looked very pretty. I promised myself to listen to her next time.
We completed the hike around Spooner Lake and hiked up to the gravel lot where we were parked. Unlike our first hike at that park, this one I'll remember. 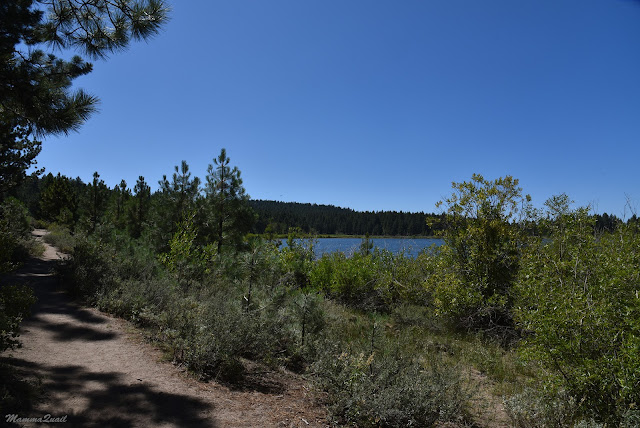 This hike was also the last one we did all together before splitting: Pappa Quail took the chikas back home and I continued with our visiting friends up north to see Lassen Volcanic National Park. Spooner Lake was the perfect little hike that we wanted before changing the scenery.