Going Underground: Hiking to and inside Pluto's Cave

I always held fascination with caves, and whenever there is an opportunity I'll happily go into one for exploration. I'm please to say that my chikas share this fascination and are enthusiastic about cave exploration as well.
That said, most of the caves we visited in California were tamed with cemented trails and stairs, electric lights and guided tours. Occasionally we do get to explore a wild cave that hasn't been tamed or capitalized on, and Pluto's Cave is such. It had been on my wanna go there list for quite some time and last November I finally got the chance to go there.
The chikas' school was out for the entire week of Thanksgiving but Pappa Quail was still at work so I invited the chikas best friend and took all three on a three days vacation in the area of Redding. On Monday we had a lovely day in which we toured the Shasta Lake Dam and after that drove northeast to Weed. As the day progressed the weather changed from clear and windy to cloudy and windier. We stopped at the town of Mt. Shasta for a late lunch during which light precipitation begun - in the shape of flurries. I was a bit concerned but when we finally arrived at the Pluto's Cave trailhead northeast of Weed we were in dry land.
Late in the afternoon when we started down the trail. The sky was overcast and the air was very cold. We walked briskly, intending to get underground as soon as possible to avoid the cold wind.
The area of Pluto's Cave is a volcanic high desert. We walked on a narrow path of volcanic sand that was very dry despite recent rains. The ground was covered with sagebrush and sparse junipers. A couple of hikers returning from the cave came down the trail and paused for a quick chat. They described a short tunnel with a high ceiling and a steep pass on the other side. It didn't sound like the descriptionI read of the cave but I figured we'll soon find out for ourselves how the cave was. After these two hikers went on their way we were left all alone in the wilderness.
Pluto's Cave is a lava tube, created when volcanic lava flow that crusted on the outside while the inside liquid lava drained away, leaving a tubular tunnel. The lava beds of the Cascade volcanoes in Northern California have many such lava tubes. A few of these caves, like those at the Lava Beds National Monument or The Subway Cave are arranged for visitors. Others are more 'wild', without artificial light, arranged trails, or even a spot on the map.
Pluto's Cave has a spot on the map with a small parking area, a trailhead and an access trail. It even has an entry in the Klamath National Forest website, but that's all. Otherwise, this cave is not managed in any way.
Lava tubes become exposed when the ceiling collapses. Naturally, people are not the only explorers who find and enter these caves. As we descended into the collapse area at the end of the access trail the chikas noticed a bird's nest up on a ledge right below the ceiling. The nest's builder wasn't there. I assume it moved someplace warmer for the winter.
A large gaping hole at the left side of the collapse area leads to a short tube that ends with a high opening. It is possible to climb there but we didn't. We explored this shorter tunnel for a few minutes, then returned to the collapse area and moved to the main cave's entrance on the right.
It isn't easy to see the main opening of Pluto's Cave because the entrance is low arched and because of the tall vegetation that grows in the collapsed area. All the bushes were bare while we were there so it didn't take us long to locate the entrance. We pushed through the vegetation along the narrow foot path toward the gaping dark hole.
Switching on the headlights we plunged into the darkness. The cave's floor wasn't flat and nice to walk on as that of The Subway Cave. Far from it- it was piles and piles of rocks, broken off the cave's ceiling. We had to carefully walk around or over these rocs and our progress was very slow.
It didn't take long however, before we saw light again - through a round hole in the cave's ceiling.
The next bit of dark cave wasn't long either - we soon came into another place where the cave collapsed. Like the collapse area at the cave's entrance, this too was filled with tall bushes bare of leaves. The path here was much narrower and harder to walk through. It seems that much fewer people went this far.
Past the second collapse area we plunged once again into the darkness, and this time with no more 'windows'. By then I also realized that my headlight was low on battery and had to use my phone's flashlight app which slowed my progress whenever I needed to use my hands to climb the rocks.
The cave was certainly more rugged as we moved forward underground. I read that it goes nearly a mile underground and that further on progress requires crawling in tight places. We didn't get that far, maybe a third of a mile altogether. We came to a stop at a large boulder that seemed to block the main tunnel. There was no path under it and going over and around it would have required more serious climbing than any of us was ready to do at the time. The kids were ready to turn around at that point. 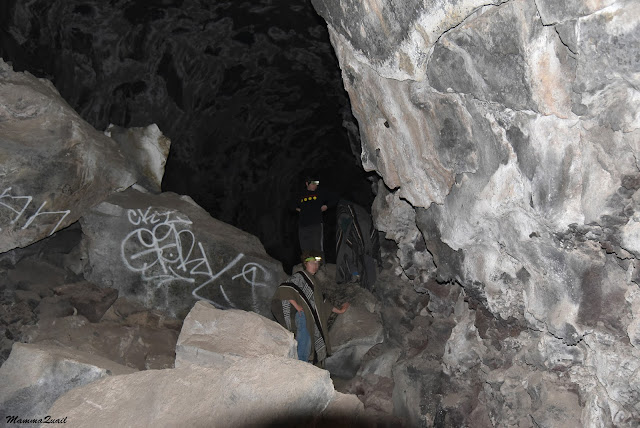 Before turning around however, the elder chika noticed a dark spot at the wall and called our attention to it - it was a bat! One of several we've seen in the cave that day, and the nearest one to us. Still, we avoided getting to close to it as to not bother it from its winter hibernation. Pretty exciting though!
As I mentioned above Pluto's Cave is not managed. That, however, has a big downside to it, which is that it is also not protected. Despite this cave being wild and natural, people seemed to have no respect to it. I was sad to see that much of the cave walls were defaced with graffiti.
While a few of the graffiti had some sort of artistic merit, most were simply junk. Either way, none of these belong in there and seeing it bothered me greatly.
Going back was faster than going in. We didn't stop as often to explore and once we've seen the faint light coming through the collapse holes we moved directly that way.
It was already late in the afternoon and also overcast, so the night filtering into the cave was faint. Still, t seemed bright compared with the total darkness inside. 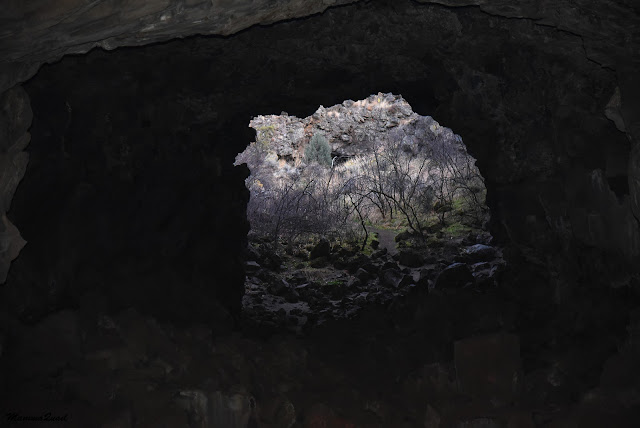 Outside in the in-between collapse area I could tell that evening was at hand. It seemed though that we might have just enough daylight left to walk the long way back so I suggested it to the kids and they accepted. 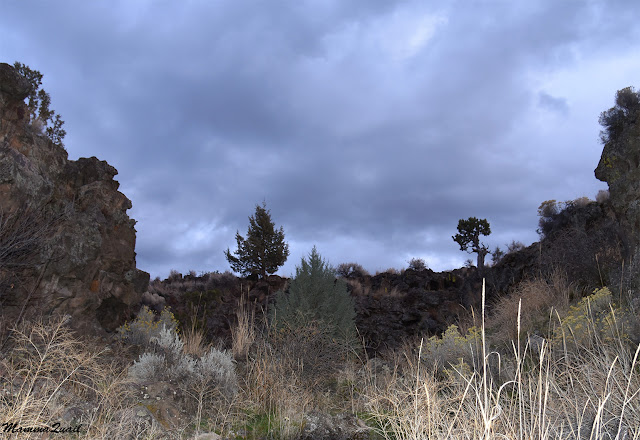 I had misjudges how quickly the light was fading. It was already after sunset when we took the longer route back. At first there was no problem telling where the trail was. We were walking on a narrow foot path with the wonderful view of the high desert around us and the peaks looming over the lava beds. 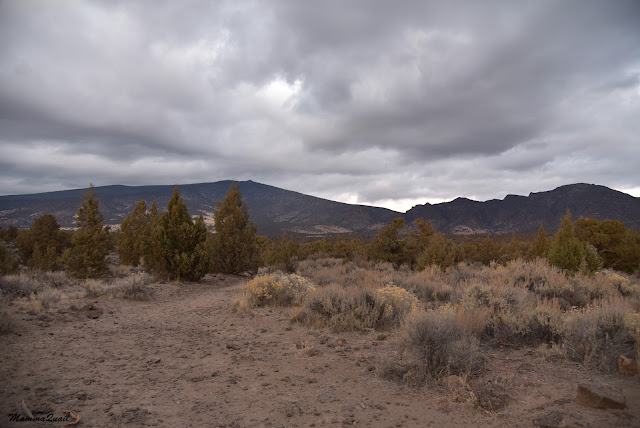 Soon however, it became difficult to tell where the trail was and more than once I had to navigate cross country in what I knew to be the general direction of the trailhead. 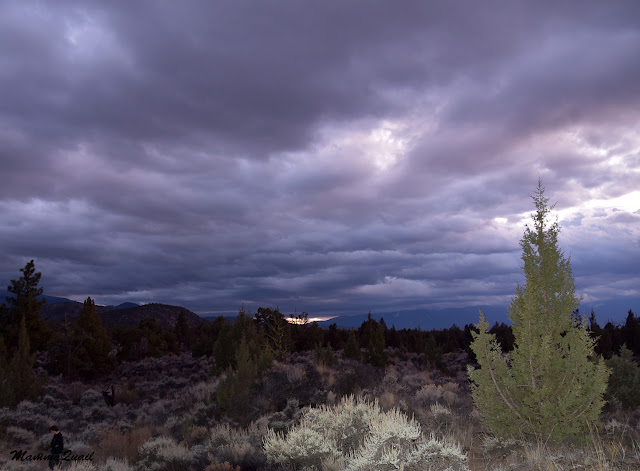 We arrived at the parking area at nearly total darkness. The wind had picked up and the kids were grateful to get inside the car and away from the whipping gusts. I took a few minutes longer to walk around the parking area and take in the wild sights - I don't know when next I'll have the chance to get to that place.

Eventually I too got inside the car and we drove away back to Redding.
We've had a number of nice hikes and other fun activities on the three days we spent in the Redding area before Thanksgiving but our spelunking hike at the Pluto's Cave turned out to be the highlight of our trip for the kids - the most memorable and exciting thing the did. It sure was so for me too!