Lassen Volcanic National Park is probably our favorite camping place in California. Not as popular and crowded as Yosemite, yet no less spectacular in its beauty. Although we've been hiking there for years now, we somehow managed to miss the park's more remote south-eastern area, of Juniper Lake. Last Labor Day weekend we finally went there for a three day camping and hiking vacation.

Saturday: Settling in.
We arrived Juniper Lake Campground just before noon on Saturday, in time to claim the last remaining site which, not surprisingly, had the smallest flat area suitable for a family-size tent, and the closest proximity to the pit toilets. The campground at Juniper is primitive indeed as it provides only the most basic facilities and no potable water. We did bring plenty of drinking water and also a filter, just in case (we didn't need to use it) and we counted on the clear lake water for washing the dishes and ourselves.
There was a lot to wash too: the last 7 miles of the road leading to Juniper Lake are packed gravel dirt road. The layer of dirt that covered our car had provided the chicas with much entertainment and us quail parents with plenty of no-nag time to settle in.

Our campsite was pretty close to the lake but thick vegetation separated us from the water, and it took me some time to find the path going to the waterfront. When I did, though, it was a very rewarding sight indeed.

These rocks protruding into the lake are an excellent seat for meditation as well as a stepping stone for fetching water. I took every opportunity to go to the lake shore and fill the pail so I could spend some quiet moments of appreciation.
On our first afternoon we hiked to the nearby Crystal Lake, a beautiful short hike which I'll describe in the following post, as well as the hike on Monday morning to Horseshoe Lake. The rest of this post I am dedicating to the long hike we did on Sunday, to the summit of Mount Harkness and down along the southern shore of Juniper Lake.

The Mount Harkness trail, map section scanned from Earthwalk Press' Lassen Volcanic National Park Hiking Map & Guide. Please ignore the mileage labels, they are inaccurate. Our trail is labeled in yellow. We started and finished at the campground.

The morning was very chilly and we took our time warming up, eating breakfast and getting ready for the hike. We arrived at the trailhead (which is right at the campground, no driving needed) at 10:10 and started ascending.


Mount Harkness is about 8040 ft high, and the trail elevation gain is about 1200 ft, spread along 1.9 miles. No let up. Fortunately the chicas were in a more agreeable mood for hiking. In fact, they were quite excited about climbing a new volcano.

The slopes of Mount Harkness are covered with a fir forest. The forest, thick at the bottom, thins out with increased elevation and the forest floor becomes covered with vegetation - mostly flat Manzanita shrubs.

The forest floor was heavily littered with dead logs and fallen branches - plenty of fuel for fires. Indeed, while we were there, there was a large fire raging in the central region of Lassen Volcanic National Park, a fire that went rampant for days and by the time we were there had already jumped the road and was heading towards the town of Old Station.Luckily, it didn't reach the eastern region of the park where we were.

The prevalent tree in that forest is the red fir. It is tall and slender with drooping branches and many are covered with a beard of lichen.


The lichen adds a bright shade of green to the dark fir foliage.


Mount Harkness is a shield volcano, similar to the Hawaiian ones. One practical meaning of this is that its slopes are reasonably gentle. Still, it took us 2.5 hours to reach the summit. The trees in the higher regions are sparse, separated by wide openings carpeted with still flowering shrubs.

There were three dominant shrub species, growing in large patches of distinct color. The yellow mats are the blooming rabbitbrash goldenweed, the silvery-blue patch belongs to the lupine and the darker silvery-green was the mountain monardella, which gave off a strong scent of mint.
Walking up we disturbed two bucks and a doe that ran across the clearing in search of a different shelter. I managed to catch the doe on camera:
Right by the summit there were even fewer trees. I found this one interesting: 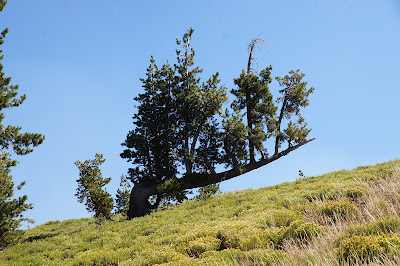 The top of Mount Harkness is a cinder cone with a shallow crater ringed with trees. We arrived there just before noon and had a long break and lunch.
There were many butterflies fluttering about, most of which were too quick to photograph.


There is a small watch building at the top of Mount Harkness where rangers watch for forest fires. As I mentioned earlier, there was a fire raging in the park while we were there. Although not in our area, the smoke did spread out and lowered visibility considerably. Still, we got to see and photograph really lovely view.

We could faintly see Mount Shasta in the far horizon but it didn't come out well in the photos. We did, however, got a nice view of Cinder Cone, just below Prospect Peak's slope line. As nice a view as we could get through the smoky air.
The lone ranger at the watch as there on a ten day shift and was eager for company. He explained about the fire watch and the progression of the current fire. All the nice central area of Lassen Volcanic National Park is now all burnt. Hikers and campers - do be careful with your fires!
We hiked down north-westward on the trail leading to Werner Valley. This trail is considerably steeper and rocky and evidence of past eruptions were displayed all around us.
In some places it looked like the trail is meandering through a building waste dump. Though much prettier, naturally.

All along the hike we could hear many birds around, but they were hidden well. We did see plenty of squirrels and chipmunks though.


The trail down reaches a 4-way intersection and we took a right turn, going down to the south shores of Juniper lake. It was nearly two o'clock and the day has already turned hot. There was no one else around so we took advantage of our isolation and took a nice, refreshing dip in the lake. The water was colddddddd!
We hiked back to the campground along the southern shores of Juniper Lake, on the easiest trail of our hike. At that point we were all tired and hungry, but we did stop to appreciate some of the water fowl on the lake.
At 4 pm we arrived at the campground. It was a good, long hike and I could feel it well throughout my body. A perfect day on a perfect trail. I couldn't ask for more!