Whenever we have visitors from out of state we take them to see 'the big trees'. For us it is always the choice between visiting Henry Cowell Redwood State Park or Muir Woods National Monument. Both of these places are home for groves of impressive redwood giants and our choice often depends on which traffic jam we are willing to tolerate going there :-/
This time we went to Muir Woods, Papa quail's cousin, spouse and baby, and me.
Traffic was much easier than I expected but the weather didn't seem promising: a thick fog blanket covered Mount Tamalpeis and the area hills. I drove down the narrow and winding road from highway 1 to Muir Woods without seeing any of the scenery: it was all fogged out. By the time we were down and found parking though, most of the fog had cleared and as we entered the park it was all gone and forgotten. The day developed to be beautiful and sunny.
Although a mid-week morning, there were quite a few people there already, enough that we needed to park at the once-removed lot. Tour buses were coming in every minute and groups of people poured through the gate, briefly stopping to pose for a photograph under the sign.

There are pretty sights even before entering the gate. The running brook banks covered with lush ferns and a grove of young redwoods, still slim, right behind the restrooms building at the parking lot.


California holds the record for the largest tree (Giant Sequoia), the oldest tree (Bristlecone pine) and also that of the tallest tree
(the record is 379 ft) - the Coastal Redwood (Sequoia sempervitens). Although not record-holding for oldest, the Coastal Redwood can be very long-lived still. This log on display in Muir Woods was nearly 2000 years old at its death. 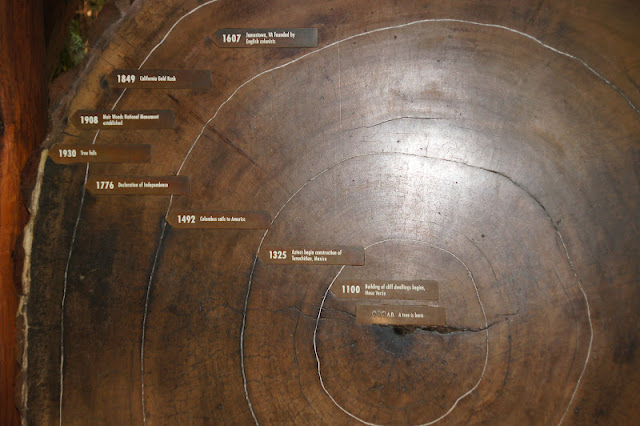 Coastal redwoods grow naturally along the Pacific coast from Santa Cruz, CA in the south to Curry county, Oregon in the north. They like the foggy weather and need the ocean mist to thrive.
The largest trees grow down by the creek, on the valley floor. From the moment we entered the park, our necks automatically stretched back to look at the high canopy.

I was unable to capture the entire tree in a single photo frame.


At the end of summer, the creek had little water in it. We saw a little fish swimming there nonetheless :-)


A fern by the creek:

We saw tree roots exposed by the trail, shiny from the multitudes who touched them while walked by. The first part of the trail is made of board walk and has clear signs requesting not to step off the trail - redwood roots are shallow and delicate, and the steps of so many people can damage them and shorten the lives of these trees. Trees to topple over during storms and mud slides. One can truly appreciate the redwood size when its trunk lies on the ground.
This tree (not a redwood) also fell over and its branches now grow upward like little trees on their own.
The redwoods are very desirable in the lumber industry for their strength, beauty and fire-resistance. They are cultivated and logged in various places in Northern California and were also successfully introduced to other parts of the world. Luckily, the giants areas are currently protected.

Many of these giants have a hole at their base. Some of these are large enough to walk inside.
Many trees had young shoots growing en mass from their root crowns. Some of these shoots will mature into individual trees with their own root systems. The tree in the middle will eventually die and leave a vacant space surrounded by its matured, genetically identical offspring.
Some of the redwoods also had growths. Unlike animal growths, these are not dangerous to the tree.  Most of them are relatively small: 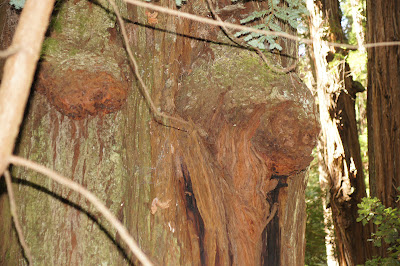 But this one has really grown out of proportions: 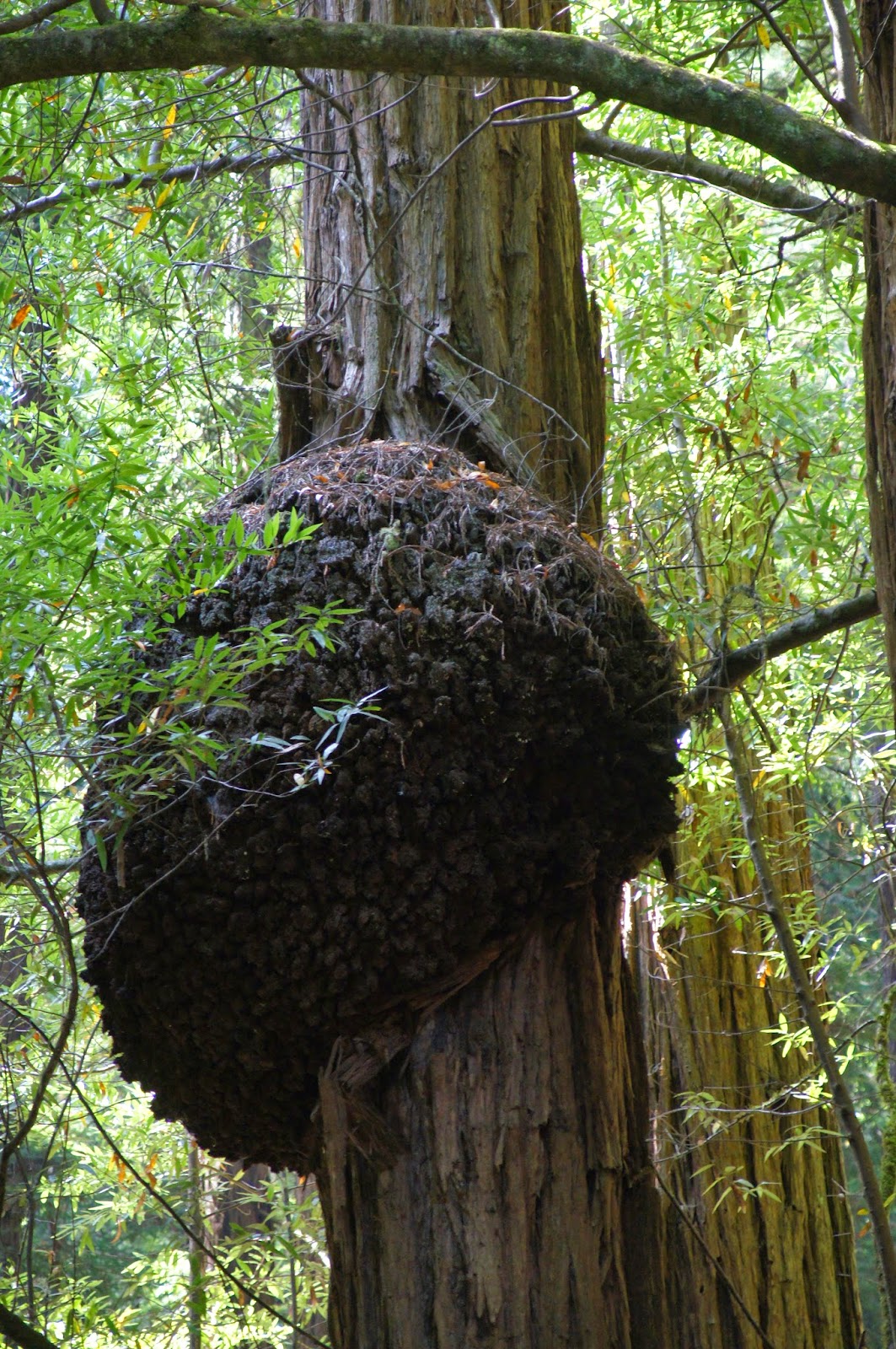 We took our time strolling underneath the trees, Normally, we would climb the hillside trail to go back to the visitor center, but that trail isn't stroller friendly so we turned back on the boardwalk on the other side of the creek. We had an interesting encounter with an elderly tourist who didn't speak a single word in English, who was fascinated with our cousin's baby and photographed him with much enthusiasm, People can sometimes be a curiosity just as much as nature, I guess.
The trail is about 1.5 mile long and the entire walk, including some baby care stops, took us about two hours. If you ask me, I could have stayed there the entire day and not get tired of these magnificent trees!