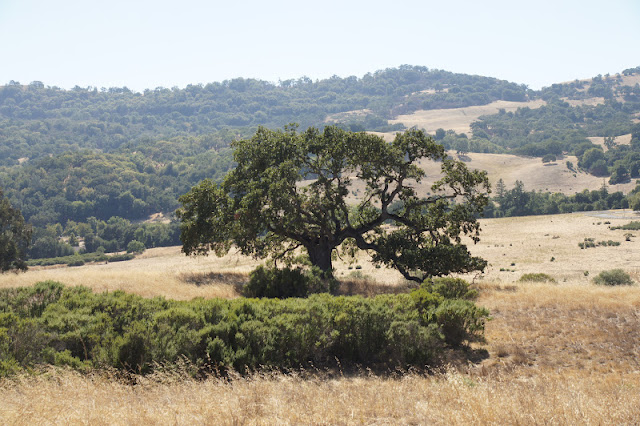 We had a nice and warm weekend at the end of September and so we took the opportunity to go with our friends on a o one-night camping trip to Joseph D. Grant County Park, in Santa Clara County. The park is on the way to Mount Hamilton, east of San Jose and the access to it is by a narrow and very winding mountain road, shared by many bicycle riders. The camping experience itself was fine except for a mild yellow jacket problem, and I will not extend on that here. We did get to go on two lovely hikes during this trip.

The first hike, on Saturday afternoon, was an easy trail leading from Grant Lake to McReery Lake (more like a pond) and back to Grant Lake around the hill.

The trailhead is on the other side of the road from the campground entrance - by Grant Lake. We started south on the ascending trail towards McReery lake. It was a hot day and this part of the trail is unshaded. Soon, the chicas started complaining and needed some prompting to keep going. Talk about mountain lions helped move them along, as they were very keen to see one :-) (Not very surprisingly, we didn't see any).

Shortly, we arrived at McReery Lake, which looked more like a muddy pond than an actual lake. The area was nice and shaded and we had a long stop there. The chicas and their friend enjoyed disturbing the calmness of the water by tossing little stones into it. I didn't allow them to go down to the water because of the deep, scummy mud that encircled its rim. The water appeared clogged with many water weeds. We saw no waterfowl there. not even a single duck.


After this long rest we headed along the hillside to Grant Lake. On the way the chicas and their friend picked dry teasels to fight off mountain lions. They were so encompassed in their defense scheme that they forgot to complain.

Teasel is an invasive species in California. Come to thing of it, dry teasel heads do look threatening.

In contrast to McReery Lake, Grant Lake was teeming with birds. Waders, ducks and coots, songbirds,


and out most prized encounter: a large clan of our state bird - the California quail, openly foraging on the trail. Finally, on this hike, I got the right photograph to make my blog header!

All thanks to Papa Quail and his wonderful photographing skills.
This entire loop is only 1.5 miles long and very easy walk. We took our time hiking it and appreciating plant and animal life, that for such a small trail was very diverse indeed.


Due to high fire danger we were not allowed to build a campfire. We had to settle for the natural blaze of the sunset on Mount Hamilton:

On Sunday morning, after breaking camp, we went on our second hike at Joseph D Grant to the Lower San Felipe Trail.

We started at the Snell campground, going South along the San Felipe trail. West to the trail was a thicket of oaks, bearded with long drooping lichen, poison oak, blackberries and other vegetation.
To the East there was a magnificent open view of the once cultivated valley, now covered with whispering grass. A full water basin, clogged with water weed and teeming with tiny fish (mosquito abatement?) suggested that cattle still graze these grounds. We didn't see any cows though. We did have a beautiful view of Mount Hamilton.

Mount Hamilton is the tallest peak in the Bay Area. It is taller even than lone Mount Diablo. I have never been at it's summit - an omission I hope to correct soon. At the summit of Mount Hamilton there is the Lick Observatory, which is open to the public 12-5 pm.

Soon, our trail changed its name to Eagle trail and entered the shady oak woods, On the lower vegetation we could see the leftovers of the now gone breeding season.


A mile away from the campground we made a right turn onto Brush trail and immediately started ascending. This trail is in the open and the heat made us look for nearby trees for frequent drinking and recuperating stops. Almost at the top of the trail we saw this tree:
Although not providing any shade, it suggestive looks inspired our imagination. We couldn't agree on one specific person it reminded us of, but whoever she was, she was certainly female :-)
I am not versed in the local folklore, but it seems that this tree sure merits its own story
So I made up a legend to go along with it. It is at the bottom of this post: when you go hiking on that trail, be sure to sure to share it with your children!

Close by was another tree that served as a perch for a red-tailed hawk.

We reached the trail intersection on the hill and turned right (North). From the brush trail, which completely in the open, we had a spectacular view of the ridge to the east. The rolling west-facing hill sides wearing a golden mantle of dry grass, spotted abundantly with dark green, well separated oak trees, dividing the hills with dark lines along the creeks.A textbook image of a riparian plant community. 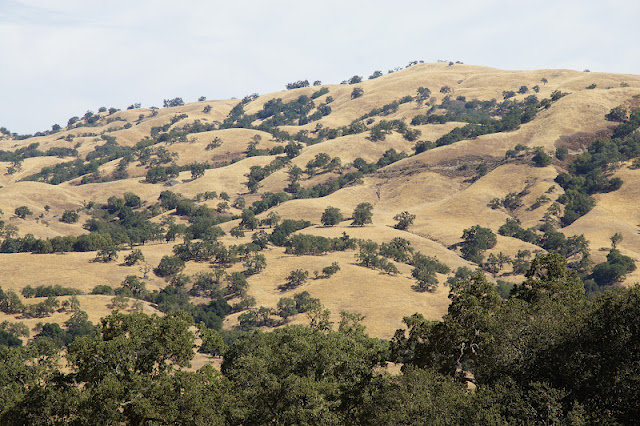 The hills we were on continued rising gently to the west, assuming a coat of oak woods on the higher elevations.
It was a good day for raptors to go hunting. We saw this American Kestrel diving many times into the grass.

Just before entering the woods again, we could see Grant Lake, small and far. We sat to rest in the shade near a dripping water tank. From that spot the trail went don steeply, back to San Felipe trail and to the campground. The entire loop was about 3.5 miles and took us three hours to hike. We bade farewell to the local resident of the campground - an acorn woodpecker - and checked out with full intention to return for more hiking in the future.

The story of the Mother's spirit tree:
By: Mamma Quail
As you read this, please keep in mind that I have very little knowledge of Native American tradition. The following story was written out of my imagination, in full respect of the Ohlone people who lived in this land before I came to live here, and still do today.

Once upon a time, there was a beautiful young widow whose name was Moaning Wind. She had but one baby girl, whom she named Squirrel in a Sea of Grass. Many men courted Moaning Wind, the beautiful widow, but she turned them all down, choosing instead to dedicate her life to her daughter. They would go to the hills to gather acorns together, to sit in the shade of the oak trees and to listen to the wind. As the years passed, Squirrel in a Sea of Grass grew more and more beautiful and young men started courting her too. But Moaning Wind didn't want her daughter to marry.
"You are my whole life, darling. I couldn't bear it if you married and moved away!" she told her daughter.

Summer was nearing its end. One day the village men went deer hunting.
"Why don't you gather acorns by yourself today, darling," her mother told her. She was getting tired of her constant watch over Squirrel in a Sea of Grass.
The girl went out, happy to be by herself at last. As you can guess, Outlasting the Rains was waiting for her in the woods, observing her every move, listening to her lovely singing.
When she finished gathering the acorns he stepped away from the tree he was hiding behind. Squirrel in a Sea of Grass saw him and blushed.
They came close to each other and held hands.

They waited in the woods for the hunters to return. They planned to go directly to the chief and request his permission to marry. But they waited too long. Moaning Wind became worried that her daughter didn't return and went out looking for her.
She had found the couple under a large oak tree on the hill and knew she was too late, She started screaming and crying, cursing the young man and the unfaithfulness of her daughter, Squirrel in a Sea of Grass tried to console her, saying that they she could live with them and that they would still be together. Outlasting the Rains tried to reason with her, saying they would bring her many grandchildren to love, but Moaning Wind was too heartbroken to listen. All she could think about was that her beloved daughter now belongs to another.
And so she cried until her broken heart had stopped.

Anguished, Squirrel in a Sea of Grass and Outlasting the Rains buried Moaning Wind in the open space on the hillside. True to their words they built their home next to her grave. When an oak tree sprouted from it, they let their children play on its branches. They ate its acorns and found shelter in its shade. And so did their children and their grand children.

The oak that grew from Moaning Wind's grave lived a very long time and protected many generations of descendants of Squirrel in a Sea of Grass and Outlasting the Rains. Then the new people came and tribe's people were driven off their land. The big oak tree had since died, only its dry trunk now stands, like an empty shell of the great Mother spirit that used to protect this land and its people.