The waterways of Morro Bay

Occasionally we give our feet some rest and move about with the power of our arms. That January Sunday in Morro Bay was just gorgeous, so our friends and us wend down to the park's marina, rented family canoes, and spent nearly the whole day on the water.
Our 'family' canoe was, in fact, a large duo canoe where two little folding seats were placed in the middle for the chikas. We sat in there, myself in the front, the elder chika behind me, the younger chika behind her and Papa Quail in the aft.
After a wobbly start and a stern warning to the chikas not to lean over the water and have our canoe capsize, we headed out northward toward Morro Rock, where the park's docent had told us we could see otters.
Nearly immediately we spotted this lovely kingfisher perched over the water.
On the rocks below the trees stood a great blue heron. Papa Quail, who was in dispute with the little chika on who should be using the paddle eventually yielded to my prompts and photographed the bird.
We had this sitting arrangement with the idea that Papa Quail would do most of the power rowing. In reality, his paddle was most of the time in the hands of the little chika, who was very zealous about rowing, but not very efficient. So, most of the time I did the rowing and Papa Quail got busy photographing the wildlife :-)
The tide was low and we had to work hard to avoid some sand bars that were very close to the surface. The west shore of Morro Bay featured a wide mud flat between the water and the sand dunes.
Numerous birds were scattered along the mud and next to it, in the water.We spent some time floating close to photograph some of them.
At some point we beached on the west shore and sat down for a snack break. To get to the dunes we had to cross a section of flat, wet sand that sank deeply under our feet.
I'm pleased to say that none of us was swallowed by quicksand. 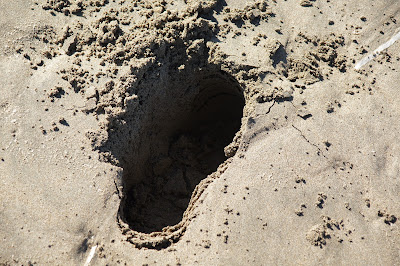 The dunes themselves provided a great opportunity for our chikas and their friends to run around and get all their wiggles out before returning to the confinement of the canoes.
Eating in peace turned to be a bit of a challenge. The wind and the children blew sand on the food, and a very persistent gull insisted on getting a share of our food.
We weren't the only ones pestered by hungry gulls. We were very excited when we spotted an otter. It was busy eating a shellfish.
And those cheeky gulls were pursuing it, occasionally attempting to snatch the booty from its paws.
The town's yacht marina is located at the north part of the bay. We had to carefully maneuver among them. It was easier for the waterfowl to do so.
One of the floating rafts turned to be a good resting spot for sea lions. They were sleepy, yet quite noisy.
We beached again at the north part of the bay and sat down to bask in the sun and watch the children search for crabs. A small gaggle of geese floated by and Papa Quail got very excited - we had never before seen this kind!
After a short hour we returned to the canoes and rowed back to the park's marina. Not before saying goodbye to the group of cormorants that were basking on a nearby float.
What a wonderful, relaxing day that was! I definitely recommend this activity to families who visit Morro Bay. Hang on to your hats, though! We spent at least 20 minutes in retrieval of Papa Quail's hat that blew into the water.

Non of us fell into the bay, and the hat is ok.