There's a Black Hill we had to climb: At Morro Bay State Park

Whenever we drive south on Hwy1 we go by Morro Rock, standing out on the ocean's background, on the north side of Morro Bay. On the weekend of Martin Luther King's Day we joined our friends for camping at Morro Bay State Park, on eastern shore of Morro Bay.
We arrived on Saturday afternoon and built our camp. Our friends, who were there since the day before, were hiking somewhere at the nearby Montana del Oro State Park and we looked for a nice, short trail to hike until sunset. We selected the Black Hill trail that begins right at the campground and leads to the summit of the 661ft high Black Hill.

This is our destination, as seen from early on the trail. There was some grumbling among the chikas when I pointed it out to them, but they were quelled when I suggested climbing the much higher hills of Montana del Oro instead.
The first part of the trail is flat and easy, meandering in low chaparral. The aromatic smell of sage and artemisia in the air was strong. I enjoy this coastal perfume very much.
There were quite a few pine trees along the way. One of them had some dead, fallen branches underneath. I liked the pretty spirals of its pine cones.

As we started ascending, we got a very good view of the delta of Chorro Creek, all covered with rusty salt marsh vegetation.


A little further inland the creek made a nice S curve in the vegetation.
We reached the road and crossed it. A bit further up the hill we came into a Eucalyptus grove where awaited us a most spectacular sight: a huge aggregation of Monarch Butterflies.
From afar, they looked just like some rusty leaves, shimmying.
A close look revealed many clusters of butterflies, hanging off the trees, fluttering vibrantly.
Eucalyptus trees are non-native in California, but the Monarchs love them. These aggregations can be found in many a Eucalyptus grove along the California coast, also in the Bay Area. But it was our first time to see them in such quantities. We were very impressed by the sight.
Eventually we managed to move away from the enchanting butterflies and continued uphill. At that point, the trail becomes steep and slippery. We had to aid the little chika who kept slipping on the loose gravel.
The climb was strenuous but the view on top was worth all the sweat!

And between the summit rocks bloomed this pretty Hummingbird Sage:
We hung around at the summit for some time, enjoying the view and the lovely weather. Meanwhile, the sun was descending and at we were about to go down, I thought to photograph it's gleam off the ocean and the bay. The sun itself is outside of the picture and the image colors are artificially darkened by the camera in response to the brightness. In reality, it was still very bright and blue, both sky and ocean.
On our way down I noticed that the Eucalyptus trees near the summit provided a gathering place for yet another winged animal - dozens of crows decorated their upper boughs. I couldn't quite get them all in the photograph so you'll have to believe me :-)  Unlike the butterflies, these birds were very vocal. 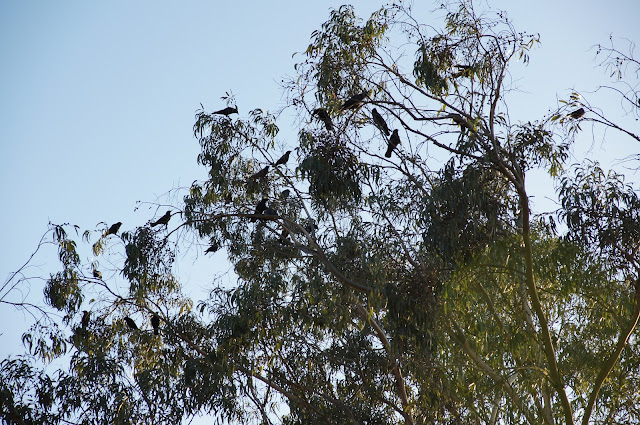 We backtracked the same trail, and on the way down I took the time to observe the surrounding a bit more carefully.
I took notice of the extensive 'beard' of lichen that decorated many of the trees:
But I liked especially the developing baby pine cones. 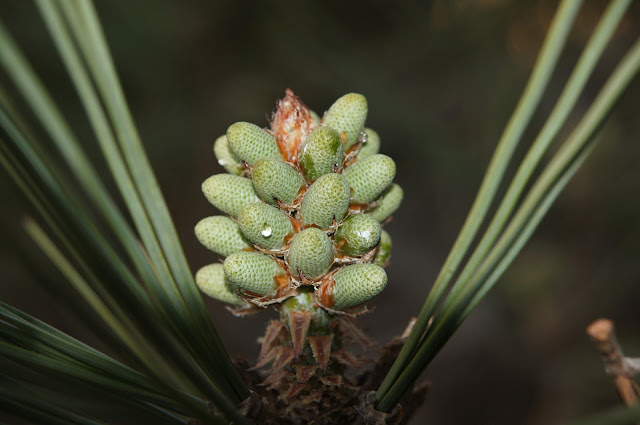 The sun beat us to the horizon and we arrived back at the campsite just past sunset. The trail is about 2.5 miles and the hike took us, in leisure, about 3 hours.
The campground of Morro Bay State Part is well developed and clean. It is, however, very crowded without any trees or bushes to provide any sense of privacy. Also, there is no separation between tent campers and RV campers and we had to suffer the generator noise of the RV in the neighboring site. I admit I much prefer the more desolate National Forests campgrounds.
Our friends came back shortly after and we had a very nice evening together. In the morning, we enjoyed the warm sunshine just like these turkey vultures on a nearby tree: 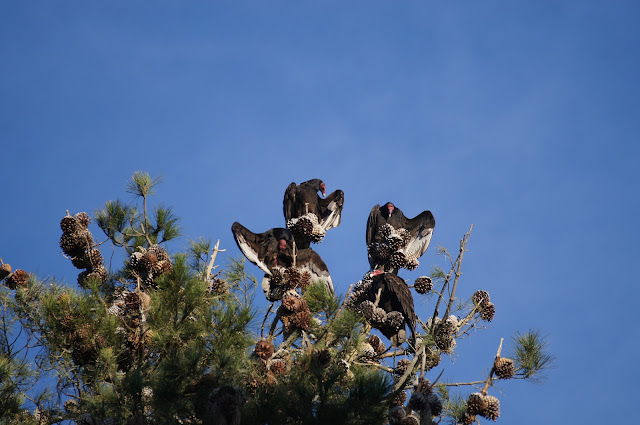