In the middle of the Southern California desert there's a large body of water called the Salton Sea. It is a periodical lake of which I plan to write a separate post. Being a source of water and food in a vast desert area, it is also a big attraction to wildlife, primarily birds. Several areas along the Salton Sea shores were set aside as refuges, We visited to of these at its southern shores: Units 1 and 2 of the Sonny Bono Salton Sea National Wildlife Refuge.
Unit 1 has an observation tower and a short foot trail of about 1 mile. We spent some time observing the birds from the tower and conferring with other bird watches who came by.
The fields to our south were filled with Snow geese but the ponds were relatively empty, save for a few ducks.

We did see a few raptors hovering in the sky and quite a few warblers who were quick to hide when we tried to photograph them, Even the Great Blue Heron we saw trotted away quickly.
We walked the foot trail and listening to the bush birds among the high and dry tules and cattails. Then we returned to our car and drove on to Unit 2.
Beside a 1.5 miles hiking trail and an observation deck, Unit 2 also has a nice visitor center with a landscaped yard. This yard alone is an attraction for many animals. For example, this barn owl that we saw sleeping, tucked in one of the fan palms, just outside the visitor center.

On the ground, many cottontails were hopping around, to the delight of my chikas.
The high-pitched squeaks and the low-pitched buzzing of hummingbirds was in the air.
And a species of dove we've never seen before. Those tiny little doves were very shy and kept to the bushes. Eventually, Papa Quail's patience and high zoom lens paid off:
But I think that our nicest encounter was with my close relatives, the gorgeous Gambel's Quail :-)
Eventually we managed to collect the chikas from their activities and went on the trail. It is a very nice in and out trail along a canal and later along the Salton Sea shore itself. It is completely flat, except at the end where it climbs a small hill. From this trail we had a fantastic view to the northwest, where we could see the snowy caps of Mount San Jacinto (left) and Mount San Bernardino (right). 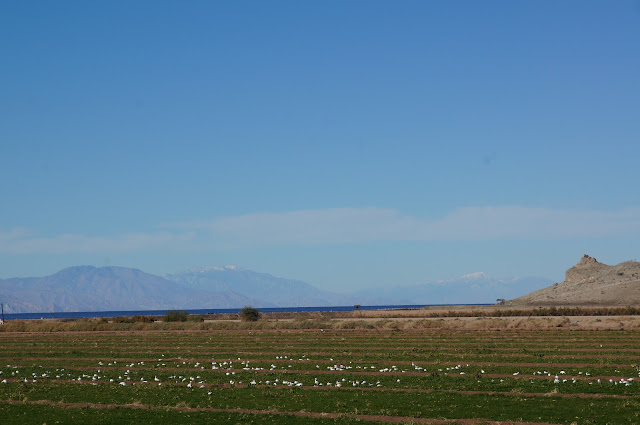 The canal and the bushes along it harbored several bird species. This Lesser Yellowlegs was one of them:
When we got to the Salton Sea shore we saw it was quite popular among seagulls. There were quite a few other birds there, from various ducks to some waders, and four or five large Great Blue Herons that stood still in the water, keeping respectful distance from one-another.
When we approached the shore the water appeared rusty red, as if soiled by a river of blood. I don't know what caused the coloration - probably just the ground underneath, I guess. Nevertheless, it was a strange sight.
From what we read about the place we learned that even deep ocean birds occasionally make it to Salton Sea. We didn't see anything unexpected. Here are some of the birds we did see:
We had a great time at Sonny Bono Salton Sea National Wildlife Refuge. We hiked the trails and saw many birds. For any nature lover who travels in the area, this is certainly a good place to stop. Personally, I believe it is worth a special trip :-)