Once Again on The Chase: Carrizo Canyon at Palm Desert

We were nearing the end of our winter vacation when we arrived at Palm Springs. Our day started with attempts to get clear information of Mount San Jacinto, a task that proved to be surprisingly challenging. By the time we finally got it, it was already late to go up there, so we drove a bit south to the town of Palm Desert, to visit the Santa Rosa and San Jacinto Mountains National Monument. There, at the visitor center, we found the most helpful and informative staff in the area, who helped us plan our hikes for the entire time we spent in that region.
The first thing we noticed as we pulled into the visitor center's parking lot was the big statue of a Bighorn ram.
"Yes, they're up in the hills," we were told.
And so, with new hope we renewed our pursuit of the elusive Bighorn Sheep.
"There are at the Carrizo Reserve," we were told. "On January 2nd that area will be closed off for nine months as to not interfere with their breeding."
That was on December 30 so, no time to waste! We headed into the Carrizo Canyon with hopes high.

Facing the parking lot is a wide and dry desert wash. It is the joining point of two tributaries: Carrizo Canyon to the left (south fork) and Dead Indian Canyon to the right (North fork). We turned left, up the Carrizo Canyon.
For a couple hundren yards the Carrizo wash is wide and its bed is dotted with desert shrubs, many of which were decorated with red mistletoe and guarded by a phainopepla bird. There were other birds too, Small and quick to fly away.
After about a mile, the wash narrows and rocky walls shade its interior.
One of the nice things about the desert scenery is that the bare rocks are naked to the eye with all their beautiful formations and colors.
Twisted rock layers tell the ancient story of the immense forces that shaped this region millions of years ago, and still do so now. 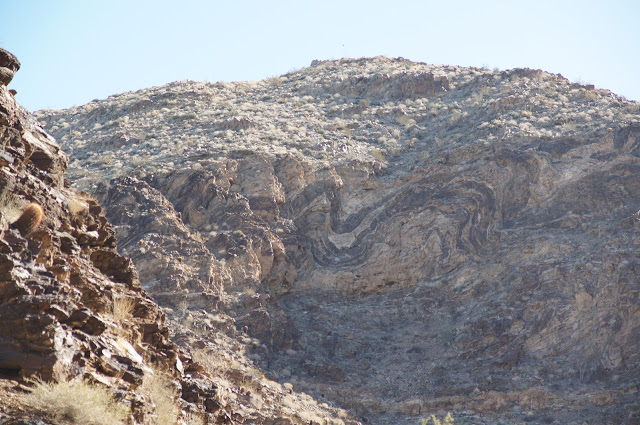 I find it awe inspiring to think of these rocks as something plastic, bending and folding like playdough.
The few plants that decorate these rocks add to their serene beauty. 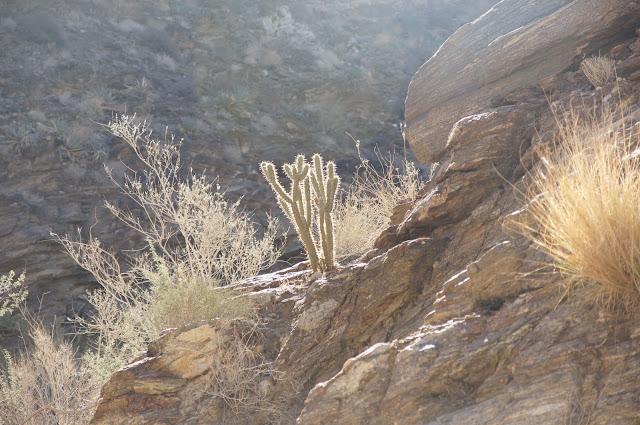 These amazing cacti make use of the tiny crevices in the rock and are able to establish themselves on what appears to be bare rock! 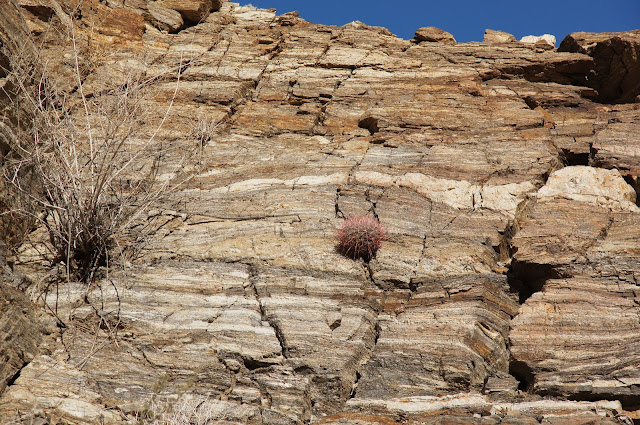 As the canyon narrows, we reached the first signs of oasis: a lone palm tree at the fork where two tributaries join. 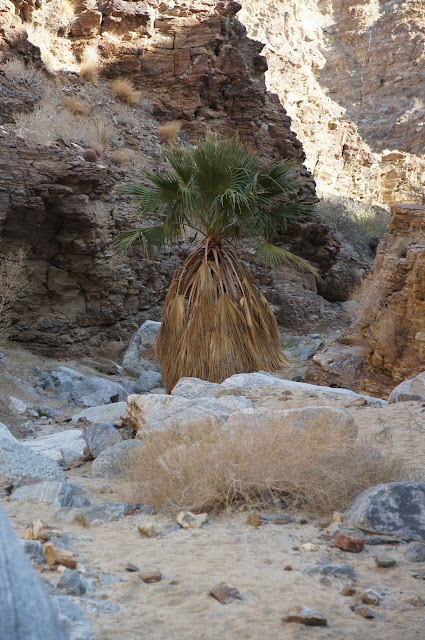 We continued on to the right fork. The canyon became even narrower and soon we had to scramble up boulders and dry cascades. The chickas enjoyed this part most, and so did their mamma :-)
After a few hundred yards we reached a tall dry waterfall which blocked our progress. There we sat down and had a snack break.

We could, in fact, climb up the waterfall, and me and Papa Quail actually did climb it in turns. Behind it were a few more palm trees, indicating of underground water running near the surface.
The elder chicka probably could have climbed it too, but we weren't sure about the younger one. So we returned to the fork and headed up the left branch, ascending the short trail that leads to an observation point.
Looking to the east we could see across the Coachella Valley, an area that in previous times was flooded with water, the remains of which is now Salton Sea. In the photo, Palm Desert is right below us, green and inviting.Behind it are the mustard-colored hills of the Coachella Valley Preserve. The brown mountains in the background are the western part of Joshua Tree National Park.
After that we came down and returned to the open wash, enjoying the easy walk in the thin gravel and the unique vegetation. This shrub caught my eye, and I thank the members of the California Native Plant Society for their help in identifying it:
Altogether, it was a very enjoyable hike. We've seen beautiful rocks, plants and birds. But no Bighorn sheep. They, as we found out when we returned to the visitor center, were seen by some lucky hikers on the other side of the Carrizo Reserve. 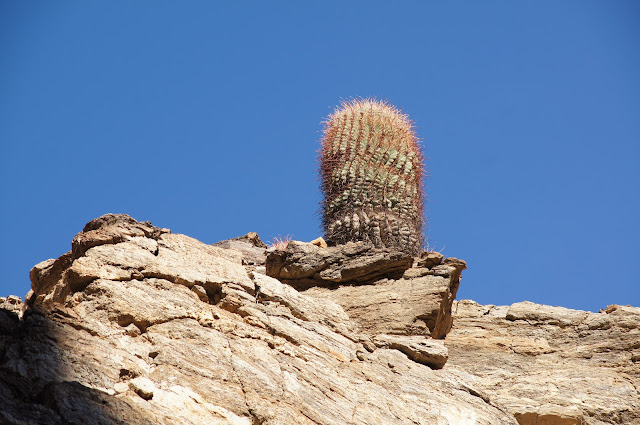