Our day started with much excitement and anticipation. This day would be the height of our winter vacation: hiking in San Jacinto State Park.
At last we unpacked the special bag where we kept our snow gear and dressed for real winter. We made it to the tram early enough and managed to take the third one up. The tram ride is not cheap but is definitely spectacular. For residents of the area it is a short-cut to snow and fun winter activities.
Indeed, this was the scenery that awaited us at the top:

The temperature was in the low 20's. Me and the chikas go every year to experience the snow in the Sierra Nevada mountains so we are quite accustomed to winter conditions. And at first, the chikas were excited to play in the snow.
They were much less excited to go hiking in the snow and started complaining almost immediately. The walk was not easy and the chikas kept dragging behind. I tried all kinds of prompts and even cookie bribery but to no avail. We planned a 4-miles loom. I don't think we made it far beyond even 1 mile before their complaints killed all of my excitement. Also, the weather took a turn for the worse. Clouds came in and it started snowing. The temperature dropped and despite the snow boots and the double wool socks our toes begun to freeze.
We turned back. My hopes for an exciting adventurous hike were crushed. The chikas were miserable and I was in a very foul mood, and all of the morning's good spirit was gone. We took the tram down, having spent less than 3 hours in the heights of the mountain.
It was Papa Quail who saved the day. After preparing a glum lunch at the hotel room he suggested we go back to Santa Rosa and San Jacinto Mountains National Monument and hike the Dead Indian Canyon, were other hikers have seen the Bighorn sheep the day before.
I wasn't very hopeful regarding the sheep, but hiking was a far better idea than to sit in the hotel and mop for the rest of the day. So there we went, back to Palm Desert.

We checked in briefly at the visitor center and heard that there were no new reports of Bighorn Sheep that morning. Regardless, we proceeded to the trailhead and started walking. The first part of the trail is where the old Art Smith trail used to be before the Carrizo Canyon Ecological Preserve was closed off for 9 months of the year. The Art Smith Trail begins now in the north side of the canyon. We walked along the south side.
At first we walked easily on soft sand. A large sandbar stretches along the current water track. It is interesting to see the hard-packed sand: that's sandstone in process. I made a mental note to return there in a million years and see it rock :-)
The easy walk was soon over. Dry waterfalls and large boulders comprised the rest of our ascend. The chikas loved it. Fun rock climbing was everything they needed to forget their morning blues. I needed a bit more still and was walking steadily onward, rarely stopping to take photos. A hiker we met that was just leaving the canyon told us he saw some sheep by the oasis. This was enough to light a fire under my feet. I hurried my family and rushed forward. I could see the oasis ahead - the very same palms we saw from the Randall Henderson Trail on the day before.
It was there that I thought I saw something moving on the rocks to the left. I pulled my binoculars up and ... 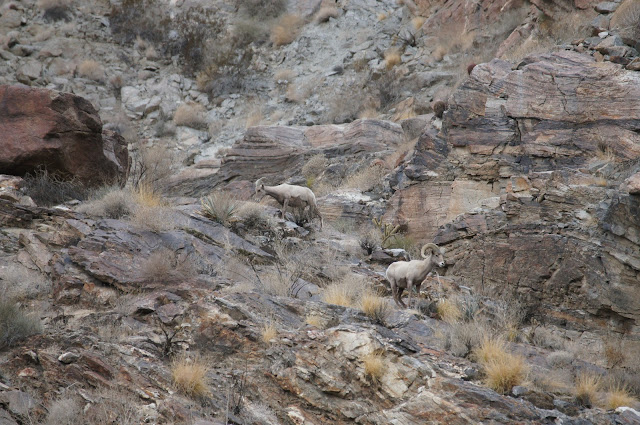 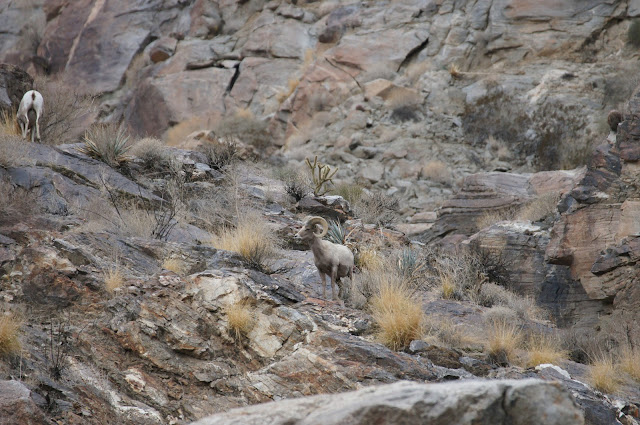 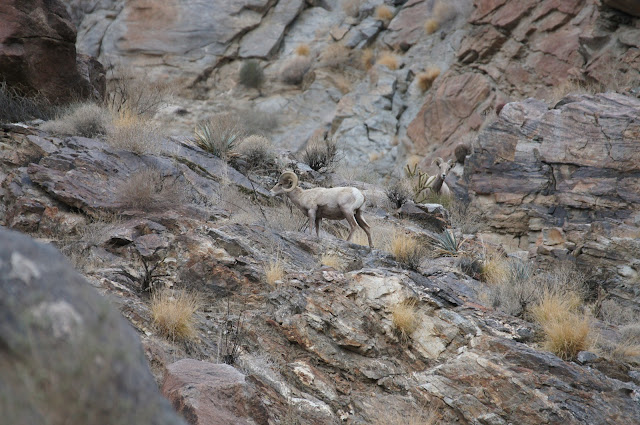 Finally! Our wish to view Bighorn sheep in nature was fulfilled, and the quest that begun a week before in Anza Borrego State Park has succeeded. All of that morning's woes were gone from my mind as well. The day has turned out to be climatic after all :-)
It was a nice herd. We counted two rams and five ewes, one of which wore a numbered collar. Two days later the entire area would be closed to people to allow these magnificent animals to breed unhindered. 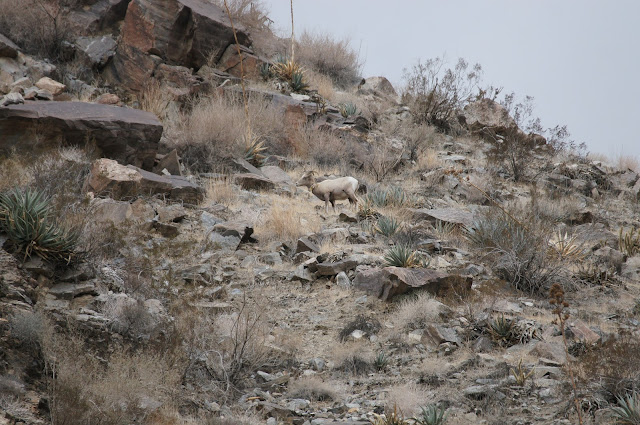 I was floating with elation all the way back. The chikas played 'Bighorn sheep', bleating and jumping on the rocks. I finally was able to appreciate the beautiful desert rocks once more. 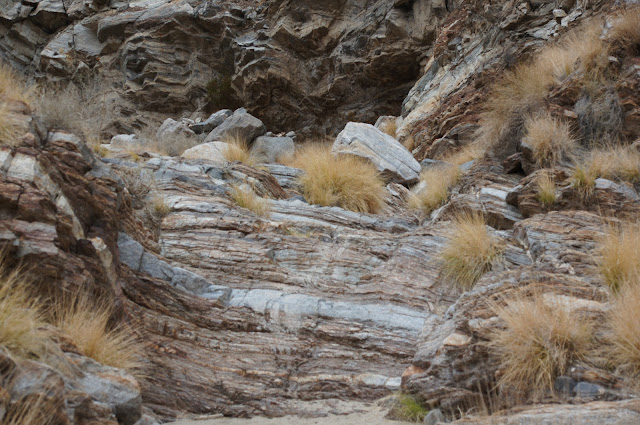 Before reaching the parking lot I stopped to pay closer attention to the vegetation at the canyon mouth.
What I saw was a large area where trees have been cut down and removed. Normally this kind of sight would have made me sad. However, these trees are Tamarisk - an invasive species in the US and a very aggressive one too. It thrives in arid climates and high salinity soils. The scenery I witnessed was no doubt an effort to remove the Tamarisk for the benefit of the native plants in the area. Tamarisk, however, is very difficult to eradicate and there were quite a few that bounced right back. 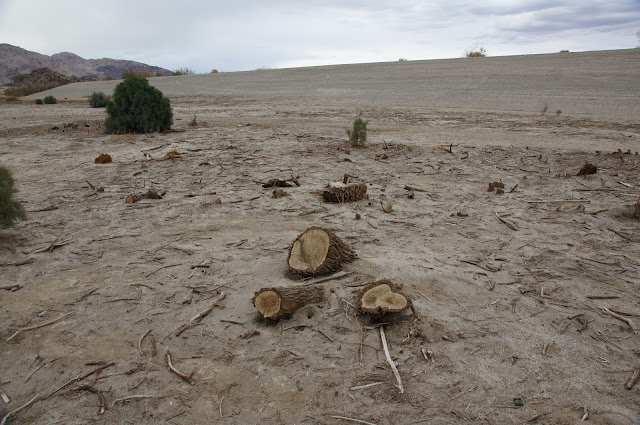 This was our last day in the Santa Rosa and San Jacinto Mountains National Monument until next time, which I don't know when it'll be. Soon, I hope! After all, there's that mountain there that I didn't get to hike properly yet :-)