Between Seasons at Trinity Alps: Rain on the Trail to Boulder Lakes

Getting to Boulder Lakes trailhead requires a 7-mile drive on unpaved dirt road. It is passable for non AWD cars but does have some challenging places along the way and requires careful and slow driving. It took us about an hour to get from the campsite to the trailhead.
This trail is within the Shasta-Trinity National Forest. The NF map is of too small a scale to be of any use in navigation. We had, in planning, acquired USGS topographic maps of the areas where we planned our hiking, and such was the map we used. The trail, as we found out, is obvious and well marked, and there was no need for any map consultation.
The trail is nice and wide in the beginning. There are many shrubs and bushes along the trail and most of them were in full bloom. This one I liked most: it looks like a little ornamented tree.
It was overcast and the cloud cover grew darker with each step, but we went on. The trail descends slowly through the forest and the shrubbery. We didn't see many anumals. Just some chipmunks here and there. This one posed for Papa Quail: 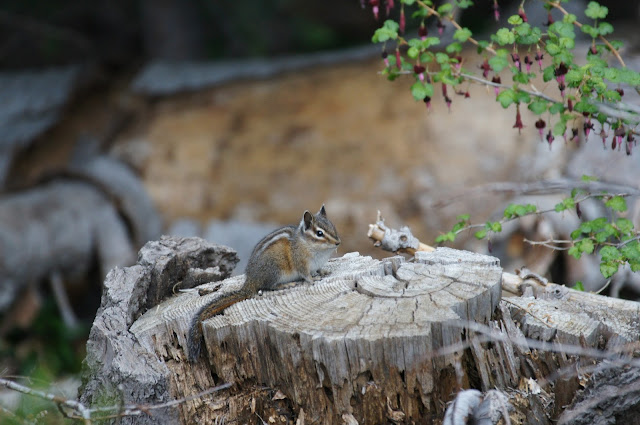 The Trinity Alps are carved from a mass of igneous rock that's different in origin from the coastal range. Weathering shaped it into ragged peaks that loom above the forest, threatening and alluring. 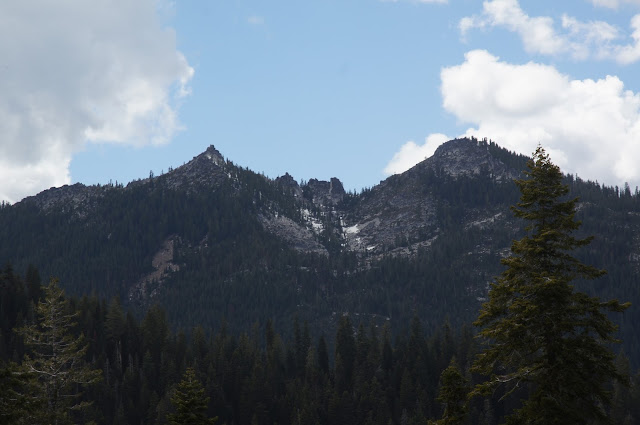 These peaks are popular among mountaineers and I could only wish I was one of them. Maybe in the future, when the chikas grow up. 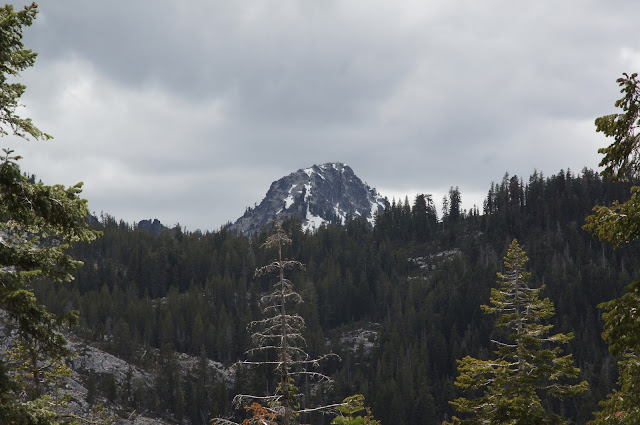 The chikas started the hike somewhat reluctantly, but got very excited when we arrived Boulder Lake. We had encountered there a group of people, one of which was busy fishing. He offered the chikas to try casting and they were very excited to do so.
The people we met at Boulder Lake were getting ready to leave quickly, and their reason hit our heads soon enough: rain.
They did recommend us not to skip Little Boulder Lake though, so we walked back up on the trail and by the time we arrived at the branching of the trail to Little Boulder Lake the rain had ceased, to we took the advice and turned on that trail.
While the trail to Boulder Lake is relatively mild grade, going to Little Boulder Lake involves a steeper ascend. It didn't help the general mood of Papa Quail and the chikas when the rain returned, and stronger. We didn't bring any rain gear on the trail with us so I had to shove my camera down my shirt to protect it, taking it out only for quick shots.
Right by the trail were evidence of the not so long ago winter: snow patches on the ground.
We looked at the lake for maybe five minutes then hurried right back under the May shower. A few minutes after we left the lake the rain stopped completely and the clouds separated. 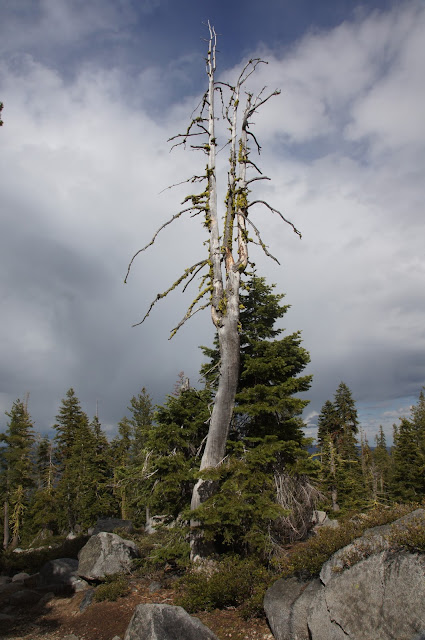 And the blue sky appeared! 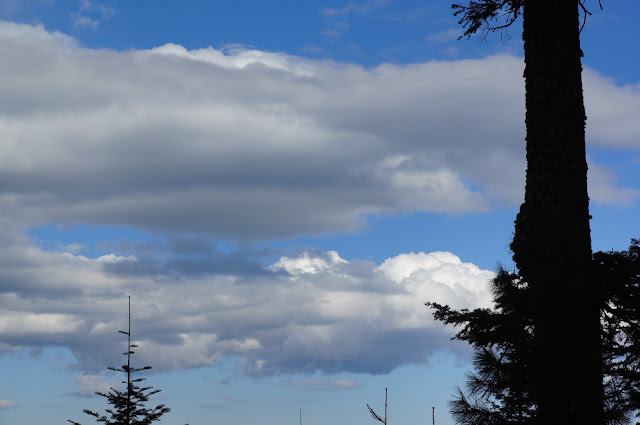 And I could take my camera out of hiding once more and photograph the pretty Manzanita flowers.
Actually, we didn't get all that wet. The rain wasn't strong enough to discourage me but the rest of the Quails decided it was time to go back to the campground and make dinner.
I didn't make it easy for them, though. There were so many beautiful flowers along the dirt road that I stopped the car frequently and got out to photograph them. I was particularly impressed by the Pacific Dogwood that reminded me of brides and wedding decorations:

It's even more beautiful from up close: 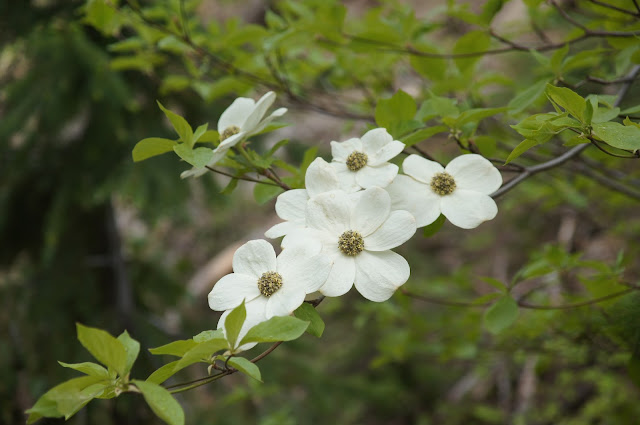 Ans the Beargrass, which lighted up the roadside with its incredible inflorescence torches:
But one time it was Papa Quail who stopped the car. He saw a movement in the trees and went out to explore. It turned out to be a woodpecker of a species we've never encountered before:
So we didn't make it back to the campground too early after all. The campground, being in lower elevation, was completely dry. By the time we finished our dinner it was almost dark. Although the trail  we did was not too challenging, we were all ready for the sack.