Winter and Spring at The Big Morongo Canyon Preserve

The Big Morongo Canyon Preserve is one of the places we found out about by having some time to check out a green spot on our road map. Is was close to our way north and we had the time so there we went.
The preserve isn't large and the entire trail system can be easily done in a short time. The thing is, though, it is far better to take it slow, because then one gets to see what's growing there. On our December visit we spent about three hours in the preserve and in that time walked all the loops except for the Yucca Ridge Trail.


We were there on the last day of the year, that is, in the dead of winter. Except for the conifers, all the trees were naked. We didn't expect to see any wildflowers at that time of year and indeed, there were none. Even the shrubs looked still and dry. 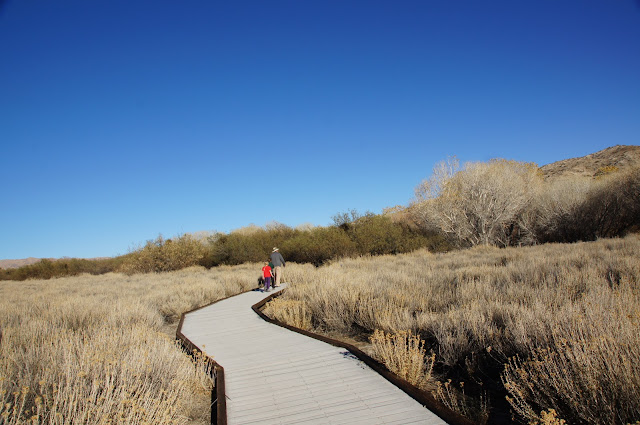 It was nice to walk around and take in the scenery. It was fairly cold when we started, but the sky was clear and the sun soon made us take our jackets off.
The different loop trails go through a number of different sections, including low brush, forest, marsh, the canyon itself and the hills above. Each of these sections is a different habitat and walking through all of them is getting to know and appreciate the diversity that can exist in a single, fairly small area.
Big Morongo Canyon is nestled between sedimentary hills that border Joshua Tree National Park from the northwest. While the hills themselves are dotted with low shrubs, the canyon itself is thickly forested. 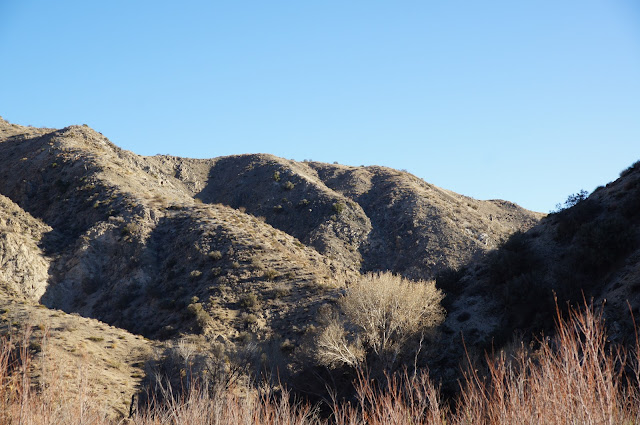 There is water in Big Morongo Canyon. Spring water that sustain all the canyon vegetation. Tall trees and all.
We've also seen the remains of a fire that was there some time ago. Many burnt trees were standing or lying fallen along the Desert Willow Trail. 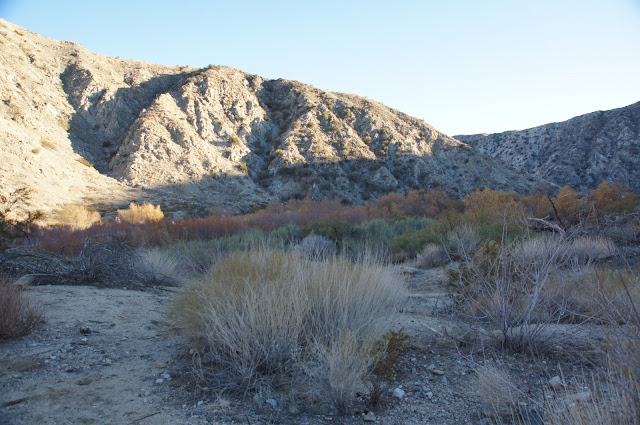 This preserve is a home for numerous bird species and a stopping point for many more migrating ones. It was the birds that we were looking for, but it was not a good time to see the migratory species and the locals didn't readily present themselves.
We kept on walking, looking for the birds. It was on the last loop we did: the West Canyon Trail, that we saw a group of bluebirds hopping and chirping happily on the hillside.
At that point we were in some hurry. The sun was setting and we still had quite a bit of driving to do. We were headed to the town of Mojave were we would stay for the last night of our winter vacation.
I was fortunate to return to Big Morongo Canyon Preserve a couple of months later, this time with my botanist friend. although spring was just in the beginning, the transformation was very impressive. All the photos below were taken on March 13, less than three months after my winter visit there.
We arrived at Big Morongo Canyon at the end of a cold wave, looking for spring wildflowers. We were lucky to have started our hike at the hillside of the West Canyon Trail (wanted to see if the bluebirds were still there. They weren't.) because that's where the flowers were.
There were not many, and all of them very small. But still, lovely dots of lively color on the bare desert ground.
And we ere happy to see them all.
The trees were a different story. All the deciduous trees that were bare two months before were now bursting in lively flames of bright greens.
Coming down into the marsh area of the preserve we saw no more flowers, just a lot of green vegetation. We did get to see all those birds that eluded us during our winter visit :-)
The tiniest of them:
And the awe-striking raptors too:
The amazing change I've seen in this place in less than three month has once again reinforced my desire to  revisit the same places, because each time its like being the first time there. 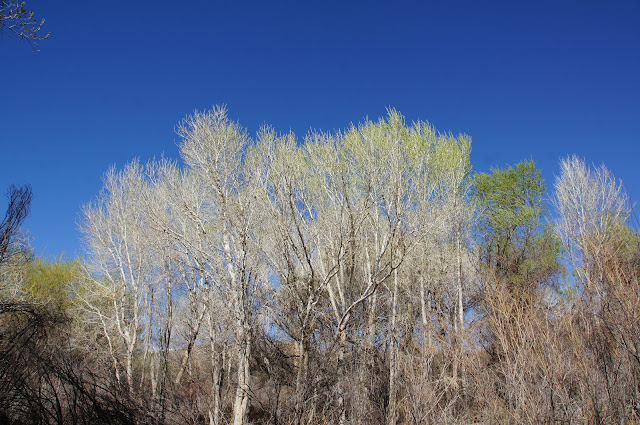 Being so close to the famous Joshua Tree National Park this little preserve might be overlooked by most visitors of the region. I would strongly recommend visiting there. But then again, it might be just for the best to not overrun the place with too many people.