After the strenuous hike to Vernal Fall and a long lunch break we were ready for some more hiking. Easy hiking.
Mirror Lake is one of the most popular trails in Yosemite. It is relatively short and without any significant elevation change, and it leads a most spectacular place. All these make it suitable for families, lay hikers and anyone looking for a pastoral stroll.
Most of the walk is, in fact, on a paved road, on which only handicapped vehicles are allowed. Bikes, though, are in popular use there (though not all the way to the lake). We took the shuttle to the trailhead and continued walking from there.
The Tenaya, much smaller than the Merced, is a very pretty river, and after coming out of the the Canyon into the valley floor is is flowing mildly through the reddish-hued granite.
Just before the confluence with the Merced, the Tenaya river flows under one of Yosemite's signature landmarks: the Half Dome rock. The summit of Half Dome, 4,737 ft above the valley floor, is a very popular destination. There are two ways to ascend it: one is through a long hiking trail that goes by the top of Vernal Fall. The other is by climbing the sheer rock face.
Each time I visit Yosemite I look at Half Dome longingly. I have not ascended it yet. But when I will, (and I will!) it will by hiking.
There were no climbers that day on Half Dome. At least, non that we could detect. 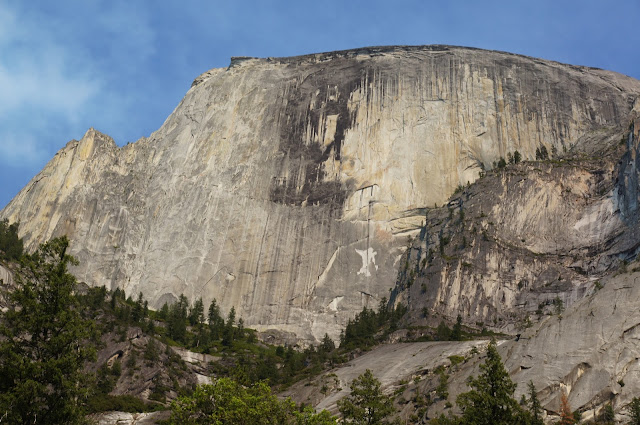 Tenaya slows down and spreads out under Half Dome. The area of Mirror Lake used to be part of a larger lake, and is now in the process of filling up with silt and, basically, becoming a meadow. In its earlier days, the park management was trying to keep Mirror Lake a lake by removing the silt. Later it was decided to let the natural process to go unhindered. Future generations may know Mirror Lake from photos only.
It still fits its name perfectly, though. Very tranquil, very clear, Mirror Lake indeed mirrors a perfect reflection of its surroundings.
And ... there is also the meadow.
And in the meadow: deer. Bold and nonchalant. They came very close, very convenient to photograph.
Always present in Yosemite, the crowds. Actually, it wasn't that bad. Still, there were quite a few people there. Many were wading to and fro in the water as did I. As did the deer, completely unhindered by the massive human presence.
Then one of them voided just a few yards from me. Although I was standing upstream I duly stepped out of the water.
After a minute or two, so did the deer. 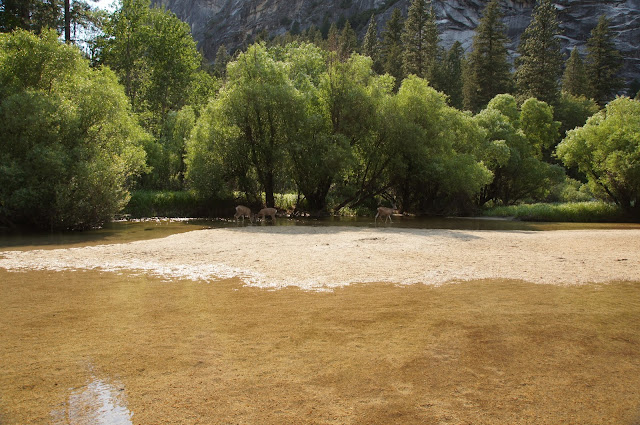 It was a really nice and easy hike to one amazing, must see!, part of Yosemite. Although I've been there numerous times before, I can never have enough.