The Butterfly Realm of Giants: Mariposa Grove and Wawona Point

A day after taking my friends to Vernal Fall and Mirror Lake I took them to see the giant sequoias. Yosemite National Park is, among many other things, a home to some of the most impressive groves of Giant Sequoia: the most massive tree on Earth. The Mariposa Grove, located at the southern tip of the park, is one of the oldest known and most explored one. It is also the first one to become protected by the Act for the Yosemite Grant, much due to the efforts of Galen Clark, the first European-descent to discover the grove.
To the visitor's convenience, there is a tram that goes on an interpretive route up and around some of the landmark trees. The tram stops at the little Galen Clark museum at the upper grove and those who wish can hike back down through the forest. So did we.
I've hiked in that area several times before and the bis trees are always impressive. It was my first time, though, to have noticed the festival of wildflowers that was going on there in full force.
While spring flowers were gone from the bay area, at the Sierra Nevada mountains they were at the peak of their bloom.
My friends got neck pains from bending up looking at the canopies. I got neck pains from bending down to the wildflowers!
There is a web of trails all over the mountain, connecting one landmark sequoia to another. I did my duty as a tour guide and led my friends to many of them. This one, the Telescope Tree, has been hollowed by fire years ago and survived. One can go inside the tree and, looking up, see the sky.
Giant sequoia are amazing trees. Not only can they live to 3000 years and hold the world's biomass record, but they are also fairly fire resistant, due to the high level of tannins in their bark, which also give them the reddish hue. The forests of the Sierra Nevada mountain range are subject to frequent fires that have become a significant factor in shaping the area's ecology. The fire scars on many of the giant sequoia there are evidence of such fires. Thick cambium growth over the char marks tell the time passed since the fire.

Giant Sequoia also form a community by linking their roots underground. However, the roots of these massive trees are anything but massive. In fact, they are very sensitive and easy to damage. This was learned at the sad price of tree death due to too much human activity around and tampering with the trees. Such was the fate of the famous 'Tunnel Tree' that was weakened by the tunnel carved in it and eventually collapsed in the winter of 1968. Nowadays, landmark trees are fenced, and visitors are advised not to come up to the trees and stomp on their delicate roots.

The wood of the Giant Sequoia is brittle and no good for construction. Very lucky for this species!
We walked from one tree to another, and I continued to enjoy the colorful spring spectacle of the forest.
Then, after passing the tree named after Galen Clark, I seduced my company to hike up to the top of the mountain: to Wawona Point.

It is only half a mile more, and the view is worth it. The children grumbled, but we went there anyway. There are no giants there but many wildflowers still.
And the view from Wawona Point was indeed breath taking.
My chicas thought that the bright lawn below (yes, it is a golf course) look like a bunny rabbit :-) The haze is from the smoke of a fire that was going on southeast of Yosemite that day. 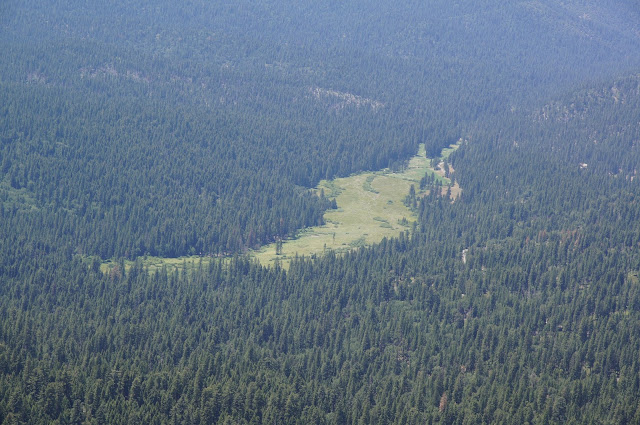 We had a long rest stop there, enjoying the view.

Eventually we started walking back. I don't remember how (maybe it's denial) but somehow the word 'tram' was heard. That word ignited an all out mutiny among my company, and after a very short discussion we returned to the Galen Clark Museum where I saw everyone, including my chicas, off to the tram, promising to beat them to the parking lot on foot. 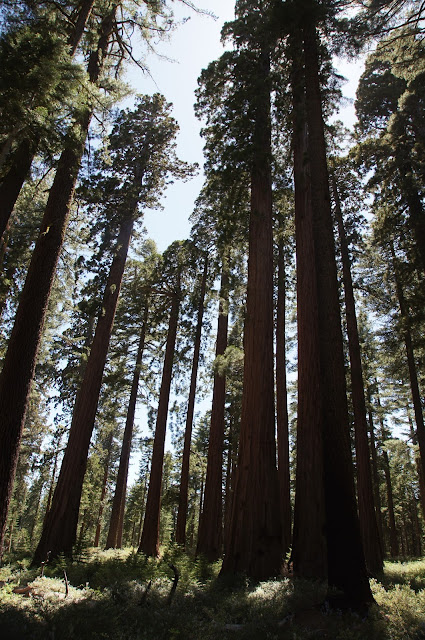 I didn't beat them there, but I can excuse my tardiness by all the beautiful wildflowers I saw on my way down (of which I only present a small selection here).
I can't really blame my friends for deserting me. After all, I did drive them pretty hard on the previous day, dragging them all the way up to Vernal Fall. I was also in a very happy mood: now I could enjoy the forest beauty in peace.
My company (especially the younger ones) had a good time too: they raided the gift shop and had ice cream. So everyone had their pleasure.
The trail downhill goes through a drier area where no Sequoia trees grow. Many other trees do, however, and the pine and cedar forest is very beautiful too. 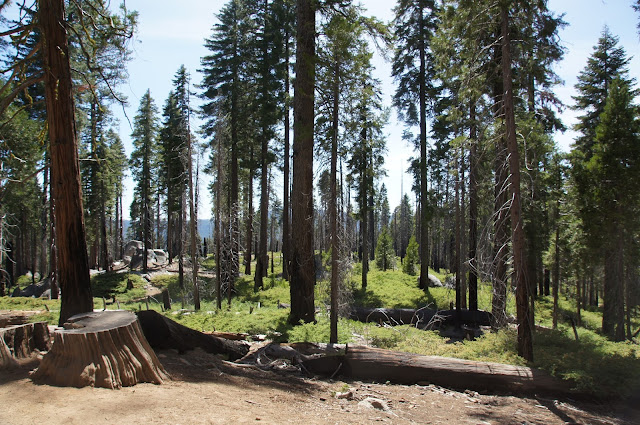 The trail leads back to the landmark trees of the lower grove, where it goes through the California Tunnel Tree which still stands, and visitors take their pictures inside it. It gives one a bit of a feel to the size of this tree.
The foot trail also took me right by the biggest tree in the grove and one of the biggest in the entire world: The Grizzly Giant. 34,005 cubic feet of wood. Its limbs are as big as trunks of nearby trees. My photo really doesn't do it justice, so you must go there and see it for yourselves.

Dizzy with delight I made it back to the parking lot and found my company slouching by the gift shop and my young chica's teeth gleaming in a joyous grin in the dark frame of chocolate ice cream that covered her face.
That was the end of the brief intro to Yosemite I took my friends to this summer. I don't know when would be my next visit to this magnificent park, but next time I will probably try to see more of the wilderness areas and less of the tourist hot spots. Next summer, perhaps?