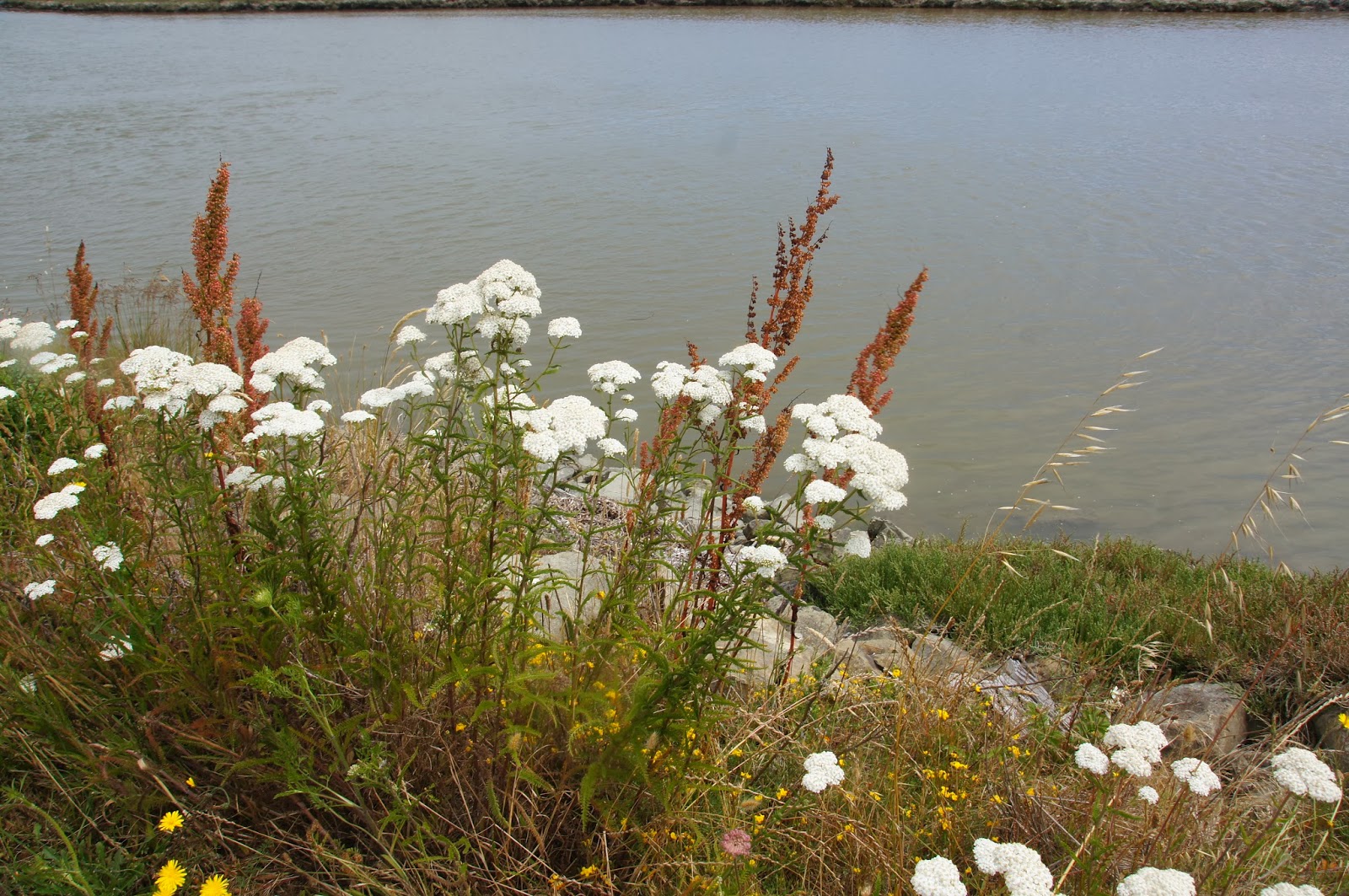 Our morning hike of the Shorebird Loop Trail was not enough for us. After a short lunch break we drove around the Humboldt Bay National Wildlife Refuge to the Hookton Slough Unit and embarked on the Hookton Slough Trail.
150 years ago, Hookton Slough used to be an active port. Boats used to go up the slough and dock there, right where we parked our car. Carts would ride the dirt, sometimes muddy, roads that connected the town to the port, and the place was busy with human activity.
Today, very little remains of all that commerce activity that once took place at Hookton. There is a dock there all right, where people take their kayaks to the water.
We just walked on the trail that stretches along the slough on its southern bank.
The trail is completely level, wide and super easy to walk. Even so, we hiked it slowly, because it is also rich with wildlife and other pretty sights.
The grey overcast was starting to thin out. There was still enough of it though, to make a good background for a flying heron.
There were many weeds in bloom along the trail. Most of them were invasive crucifer species. On the water side there were clusters of cloud-white blossoms: the prevalent California native narrow-leaf milkweed.
Going out west, I paid more attention to the water side of the trail. Besides the milkweed I took notice of the lichen-decorated levee rocks and the salt marsh swamp fire plants that grew between them.
The wind kept blowing in our faces as we headed west. None better to demonstrate that than the flexible blossoms of the tuft grass. The yellowish tips shined and sparkled against the grey background. I couldn't quite capture that effect on camera.
A group of great egrets blocked our way. They seemed to have been discussing some serious matter between themselves. As we drew near they flew a bit further down the trail. They did so again and again as we progressed down the trail. Eventually, they flew away altogether.
I looked south. A dark grove of trees far across the field was there, carrying a large number of roosting egrets and herons. 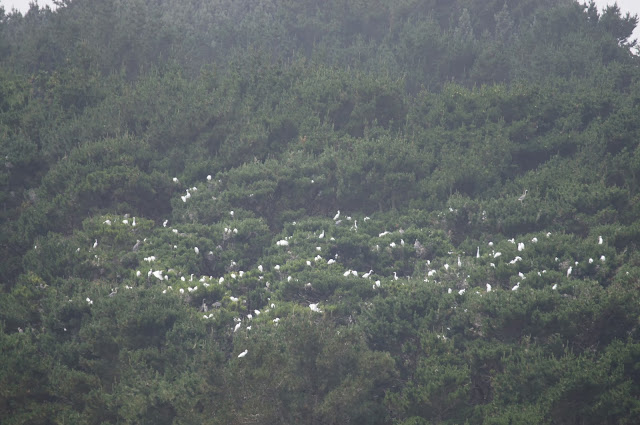 A few more steps and I run into what could possibly have been the point of discussion: a broken egg shell. 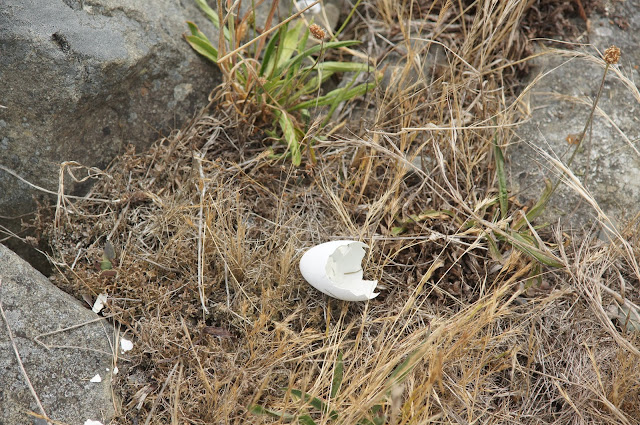 And another. And another. That entire section of trail was decorated with numerous broken eggs in varying degrees of shatter. Some had still dried yolk smeared on them, suggesting that they were stolen from the nest and eaten, rather than the shells being the removed remains of hatched eggs. The eggs are a but smaller and more slender than an ordinary chicken egg and I suspect they might have originated at the heron colony in that far away grove.
We went on walking. The tide, that was receding the entire time we were walking west, has reached its lowest point and we were nearing the end of the trail.
Our hike ended abruptly at a gate carrying the sign 'End of Trail'. The trail does continue, however, into private land.
We stayed there for sometime. The chikas went down to the exposed tidal zone and drew pictures in the sand. As appreciative as I am of my daughters' artwork, I do prefer the natural ripples pattern etched in the sand.
Eventually it was time to head back. The sun was making good progress in breaking through the overcast, the tide was coming in now and the smaller birds were all over the place, looking pretty:
And sounding great:
It was only on the way back that I noticed a canal of what looked like fresh water on the east side of the trail. I looked closely, but couldn't see anything swimming there. 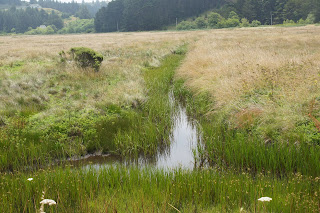 The way back didn't yield any more surprises. The chickas were busy looking for ladybugs and snails. They even found some :-)
Before long we were back at the parking lot and done with our Forth of July vacation. It was 4 hours of quiet drive all the way back to the Bay Area.


You can click on the photos to get a better view.