On January last year I went to Sunol Regional Wilderness to check out the Flag Hill trail for the 4H hiking group. As it turned out, we ended up going to Little Yosemite instead. We had a very good reason: it was right after a very wet Fall and the Alameda Creek was high and flowing strong. I wanted the group to enjoy that sight as well.
I did have a very nice hike, though. For some reason I've been lingering in posting that hike. Now when I look at the photos I took exactly a year ago, I feel sad. This year there's a bad drought here. The creek is but a trickle and the hills are parched dry.
Still, I would recommend going there, even now. Sunol Regional Wilderness is beautiful any year. This year, however, you'll get to hike in summer's scenery at winter temperatures.

I parked right by the little foot bridge that's a little further down the road from the visitor center, took my backpack and crossed the Alameda Creek.
Several trails split from that point, some of which I know well from having hiked them numerous times. It was my first time, however, to hike up Flag Hill Road, which is the trail that splits to the left (east). After a short walk upstream the Alameda Creek I begun ascending the hill.
The hills of the southern regions of the Alameda County are too dry to support a thick forest. The trees, oaks mostly, grow in wiggly lines along creeks, or otherwise dot the open grassland. January is a good month to observe the contrast between the deciduous and ever-green oaks. I ache now to see how green were these hills last year.
The trail going up to Flag Hill has been newly redone by the Boy Scouts. Many other trails were cut across the grassy hillsides. These weren't done by humans, though.
Ascending Flag Hill is a good workout. But there's nothing like the feeling of sitting at the summit, the winds of heights blow-drying the sweat from my face. The views are spectacular.
For a while I had the peak all to myself, but after some time other hikers were coming up the hill. I gathered my things and continued northward on the Flag Hill Road that linked me to the High Valley Road. Along the trail there were many oak trees, both dead and living, that had holes in their trunks. The drillers of these holes - Acorn Woodpeckers - were flying all over the place but didn't sit still for a photo.
Plump ground squirrels were busy all over the place. They too, were quick to run down their holes when they saw me approach.
The hills north of my trail were very alluring. I would need longer time to hike the trails that go up there. It would be a hike for another time.
Where Flag Hill Road meets Valley Road there is an old homestead and a cattle area. There is also this interesting tree, standing all alone: 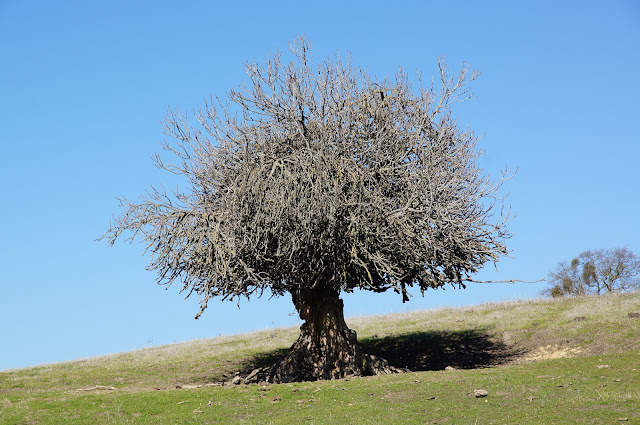 The trail goes right by High Valley campground, then it meets Hayfield  Road and goes down.
I was a bit surprised to see this rather large thicket of prickly pear there. I should remember to go there late next summer with an empty can and a knife on sticks :-)
The way down was quick. This time, though, I paused on the bridge and photographed the rippled reflection on the swollen Alameda Creek. I still hope to see this sight again this year. Alas! There's not much time left. Let's all hope for rain to come!

Do click on the photos for a larger and crisper view.
Posted by Mamma Quail at 9:24 AM