A Floral Delight at the Sacramento River Bend 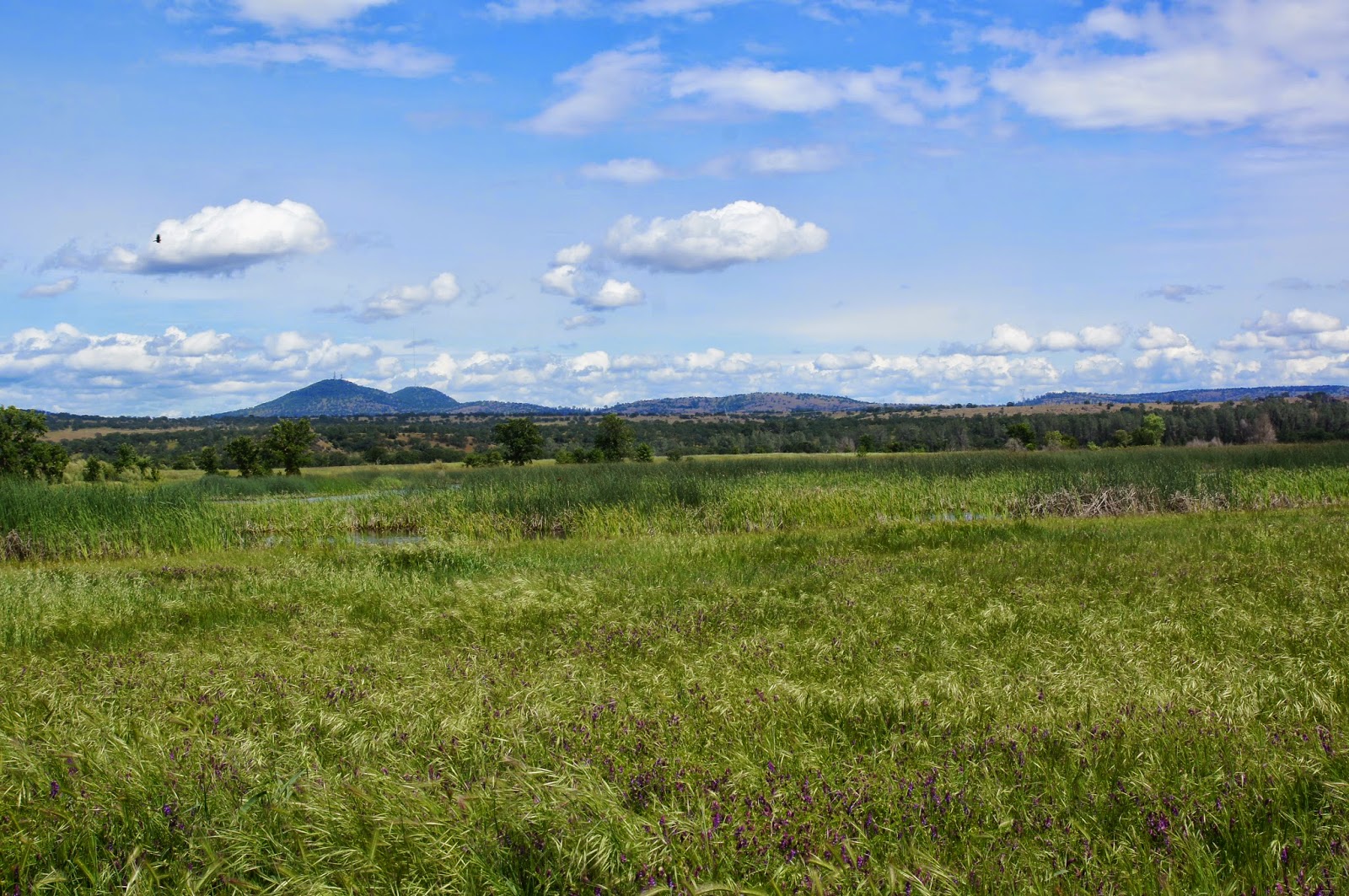 It is always exciting to discover new places to hike. It is even more so to find a beautiful trail in a place we've driven by so many times and never realized was hiding such a sweet gem of Nature. This is the Sacramento River Bend (SRB).
I-5 is the main route to northern California and for the most part, until about Redding, it stretches through the Central Valley, with very little to look at save for endless fields and orchards.
The are, of course, the National Wildlife Refuges along the Sacramento River, such as Colusa NWR that we discovered by a lucky chance.
This was that last day of our spring break road trip and I have learned about the Sacramento River Bend just the day before. I had gone into the Bureau of Land Management (BLM) office to inquire about hiking trails around Susanville, and learned that there is really only one worth recommending - the famous Bizz Johnson Trail. But the nice lady who helped me there has a daughter in Redding and was very familiar with the outdoors recreational possibilities in that area. When I told her we were heading that direction she handed me a brochure. Go there, she said.

So we did. After our hike to Whiskeytown Falls we were homeward bound, but not quite ready to reach there yet. Thinking of a short, easy hike to finish our spring break with, we left I-5 and parked at the Yana Trail parking lot, where, almost immediately, Papa Quail spotted a bird that was new to him:

In April, the entire area was green and lush. And following the week's rains, it was flooded as well.

We walked slowly along the pond. Papa quail was looking for birds.

Of which there were plenty.

And I was looking for flowers.
My first sighting was very conspicuous, but not very exciting: mats of hairy vicia, a very invasive weed.
Looking further, though, I soon saw other colors as well. Countless of ltitle white flowers were embedded in the green grass like little stars. 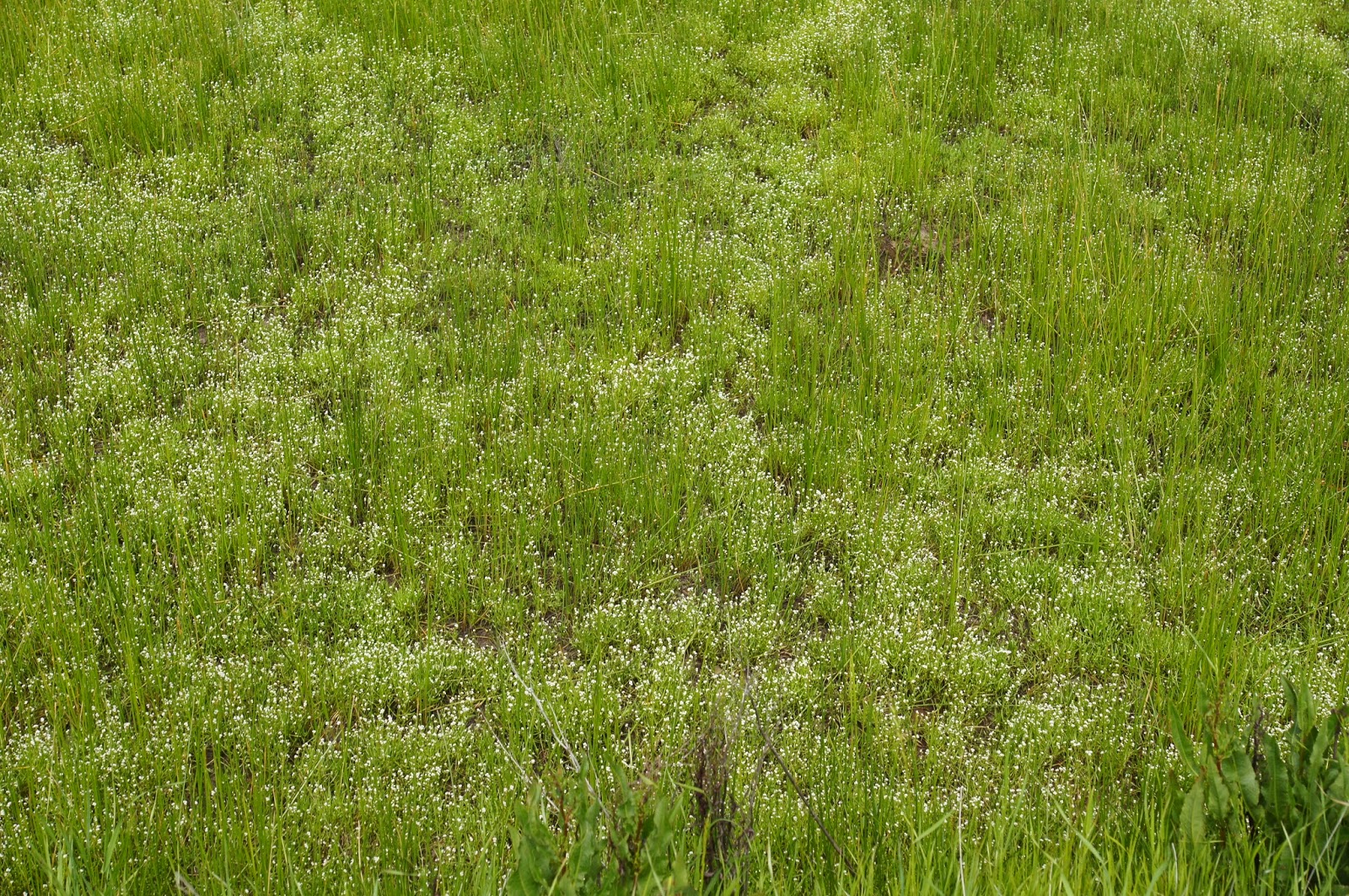 There where many white species in bloom there at the time. Most prominent were popcorn flowers and plantains, but some stood out in the crowd.

The yellow goldfield was prominent everywhere, spotting the location of the vernal pools that had dried up.

There was more than one yellow species, of course.

Pink was another common color there. Not as dominant as the whites and yellows, the pink flowers certainly stood out in the green background.

There were many of these small, delicate lilies there. Each was small, but patched together they made lovely pink floral mats.

The rains of the past week flooded the fields near the trail. Small dark figures flew over the water at astonishing speed and agility. Barn swallows. 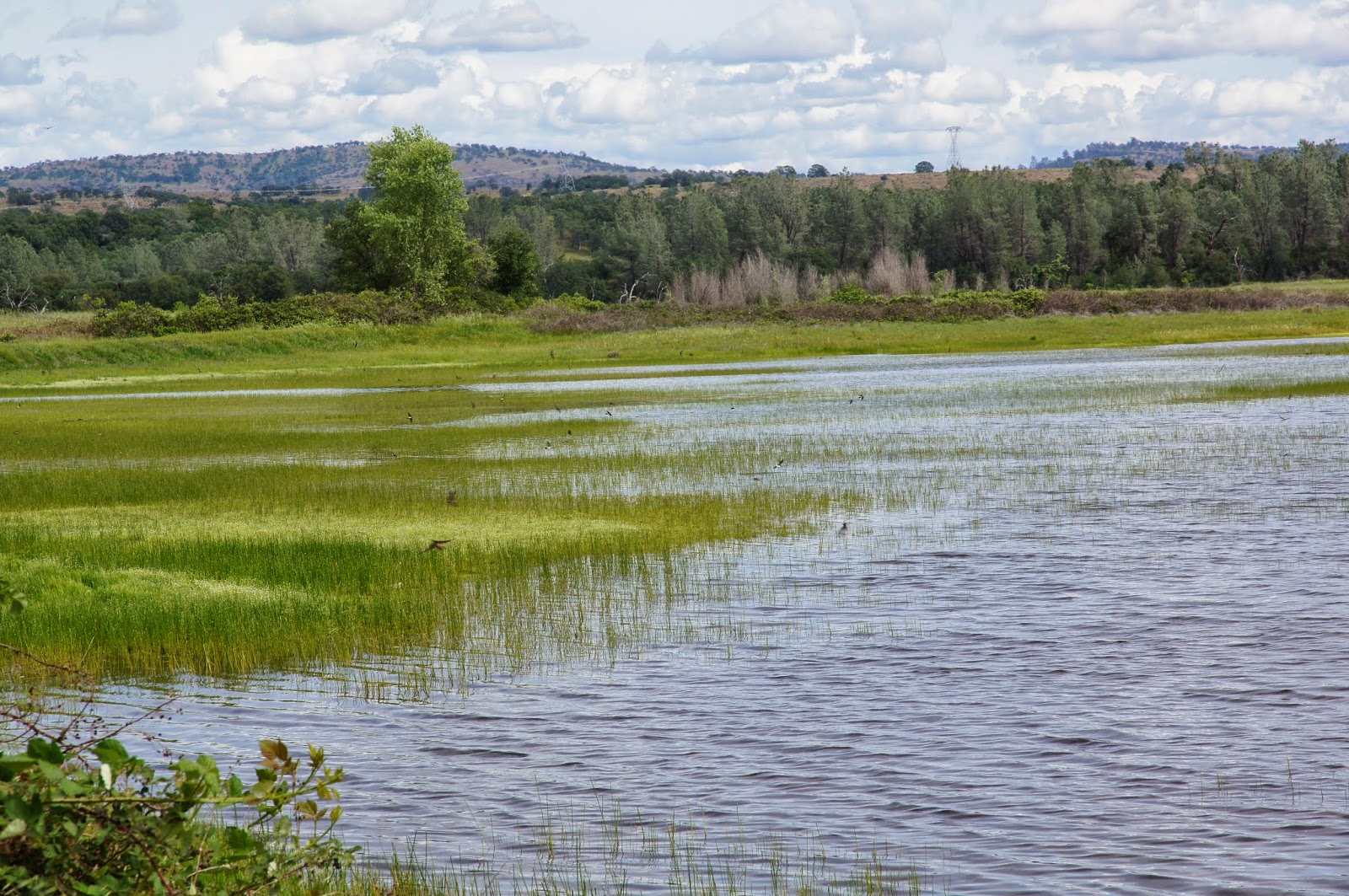 It is very, very difficult to catch a swallow in mid-air. It takes good equipment and a lot of patience, and also some luck.

In the water - waders. Several stilt, named after their disproportionally long legs, were searching the flooded field for morsels.

We passed the pond and the flooded field and crossed the canal. There we turned left only a narrow foot trail which we mistook for the official Yana Trail. The trail we took stretched into the grass fields that was patched and dotted with multitudes of wildflowers. 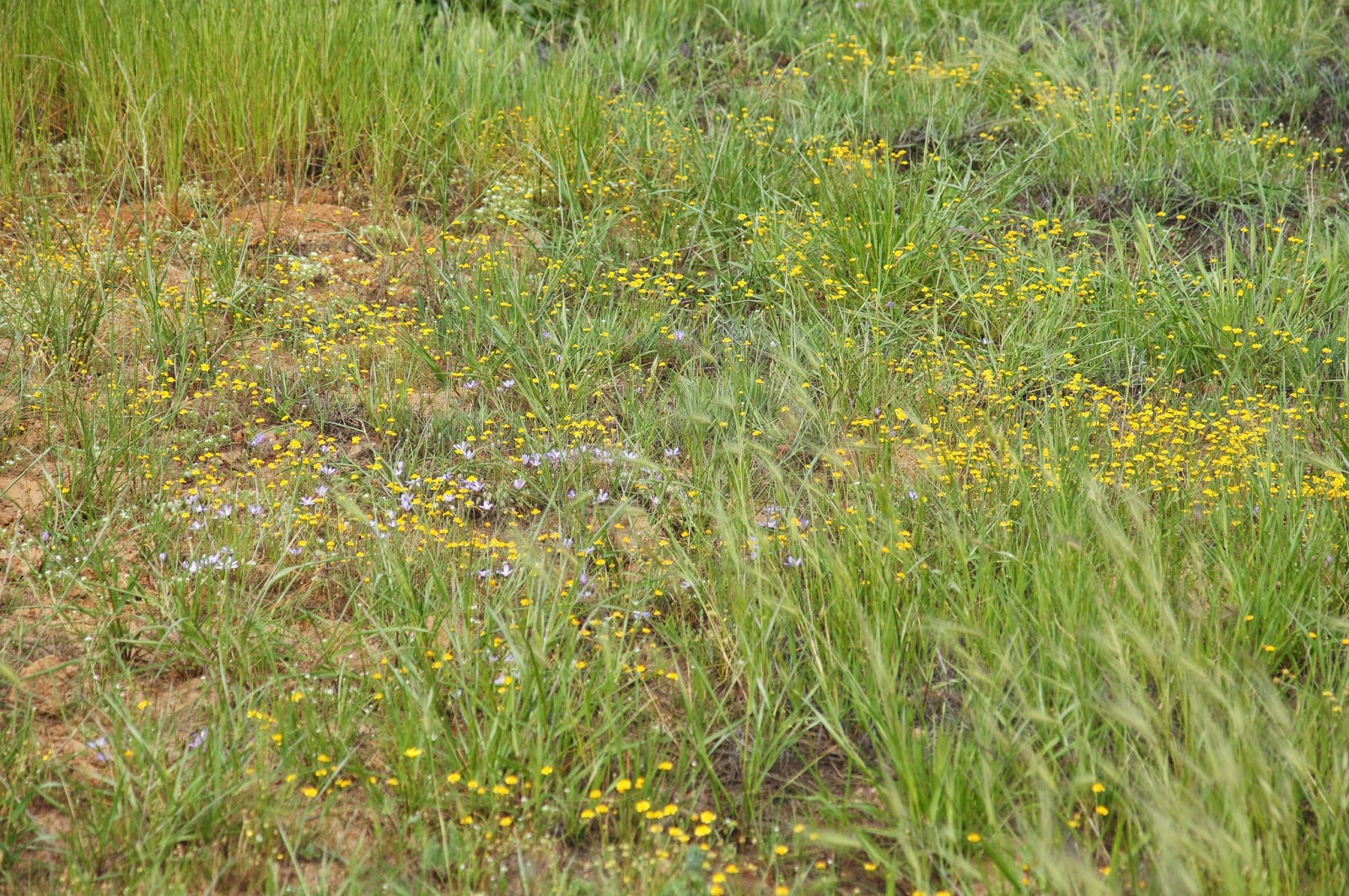 Some flowers were considerate enough to grow above the grass.

Some even announced themselves blatantly:

But for most, I had to kneel down.

For some, I needed to almost lie down on my belly, just like a true passionate botanist.

I was compelled to drop down more than once :-)

At some point I detected a blue dot by the trail. I stepped off and knelt down. When I got up again, the rest of my family were far, far away ...

That day was my first time of seeing the delicate Downingia in bloom. Not far from that spot was another species of Downingia, also small and very delicate.

When I eventually caught up with my family, they were all excited by something that the chikas caught on the trail - a tiny tree frog.

I took a quick photo and had the chikas release the frog in the grass. As the relieved critter hopped away we continued along the trail, which brought us near a dry canal that was lined with trees. While Papa Quail kept looking for birds in the trees, I spotted a tall, yellow flower far in the grass field. A Mariposa Lily!

Not stopping to consider the possibility of rattlesnakes I waded through the tall grass for a closer view. As we continued on, though, we saw quite a few of them. At the point where we realized that we were nowhere near our planned route we were looking at an entire field of lilies, a few of which were white.

The area is nearly flat, making it difficult to navigate by landmarks. We knew the direction of the Sacramento River where we were supposed to be by then, and we knew we were not anywhere near it. We had the dry canal on one side and a field of green grass strewn with volcanic rocks and dotted with countless mariposa lilies and ookows and the trail we were on was curving eastward.

We backtracked to the last intersection we had passed. There was an information kiosk there and after some deliberations, we thought we had identified our position.

A dirt road stretched from that trail intersection to Bend Ferry Road. That was the way we would take back to the parking lot. It was getting late, however, and the clouds started gathering again. More urgently - the chikas started complaining. They were hungry.

So Papa Quail took off, jogging down the road. It was getting too cold to just sit and wait so I encouraged the chikas and together we walked along the road as well.

Papa Quail carried off his big zoom camera when he went so I didn't get good shots of the gold finches and the woodpeckers I saw along the way. The flowers, though, were a different matter.

It was back to the whites on the way to the car.

The wind picked up and the cloud gathered above. It looked as if it would rain. The chikas complained they were cold and tired so we sat down by the roadside and I hugged them so we all would keep warm.
Papa Quail was greeted with wide smiles of relief when he arrived shortly after with the car.
Thus ended our last hike of our 2014 spring break, which started with flowers and ended with flowers, as spring should. We were on our way home and back to school.


Sacramento River Bend BLM is a new discovery for us. We only touched a bit of what it has to offer. We've seen bird species we haven't seen before, and wildflower richness and diversity that made my head spin. I will gladly go back there for more exploration.