After our wintery spring visit to Manzanita Lake we headed down to Redding for the night. The rain has stopped and the sky was clearing up. By morning there was no sign for yesterday's rain, except that the air was much cleaner. So right after breakfast we set out east on CA-299 to Whiskeytown Falls.
We wanted to go there last year but ended up being rained on and hiking Crystal Falls instead. Now we were having another opportunity. 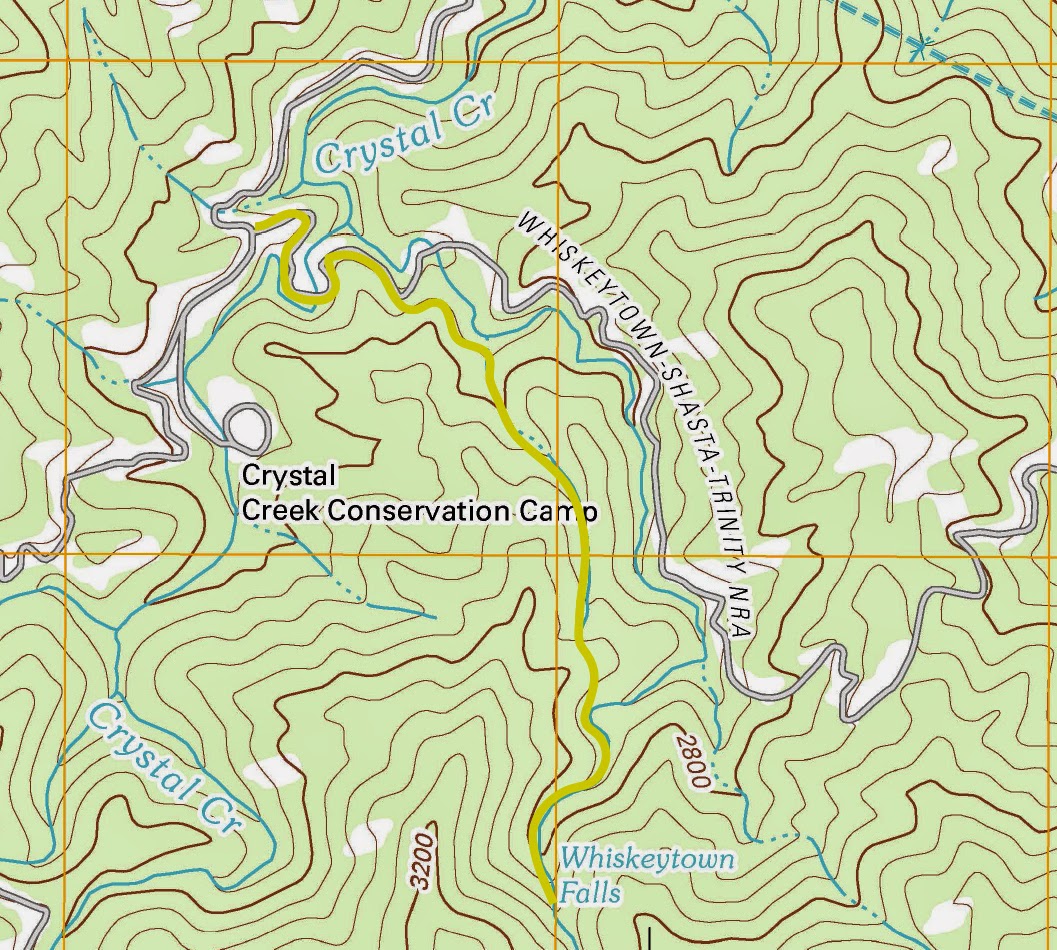 The parking lot is small, but we arrived early enough to find a parking spot. Just ahead of us there was a happy group of girl scouts from Redding and we trailed after them. They were singing quite loudly and cheerfully. While us adult quails were a bit worried that the loud singing will scare away all the wildlife, the elder chika joined them in happy sing-song.
The beginning of the trail is dry and exposed to the sun. The sandstone had swallowed all of yesterday's rain and appeared as patched as ever. The plants, though, appeared lush enough, even those more adept to dryness.
The open patches provide opportunity for little, herbaceous plants to thrive in the sunlight. And it was springtime for those!

The girl scout had a break and with some effort we managed to convince the elder chika to separate from her new friends and go on.
Yet, every time I stopped to photograph a flower, the cheery girl scouts passed my with song.
For the first part, the trail is almost level. Then crosses Crystal Creek. That point is definitely not dry and exposed.
In fact, that area is quite rich with lovely dogwood that were blooming nicely at the time we were there.
After the creek crossing the trail starts ascending. We traded places with the girl scout group a few times but eventually we were ahead, and alone. Not that it helped us seeing any wildlife ...
But flowers were plenty.
The trail went in and out of the woods but for the most, it was exposed. Almost all the way to the waterfall.

And it got much steeper, too. We started encountering people who entered the trail before us and were now descending. They kept encouraging us, saying: "You're almost there". I always wondered how could that be encouraging to anyone that's huffing and puffing upward. To me it sounded rather annoying (and that didn't stop me from saying the same things to ascending hikers we were passing on our way down).
And then ...
We were there! 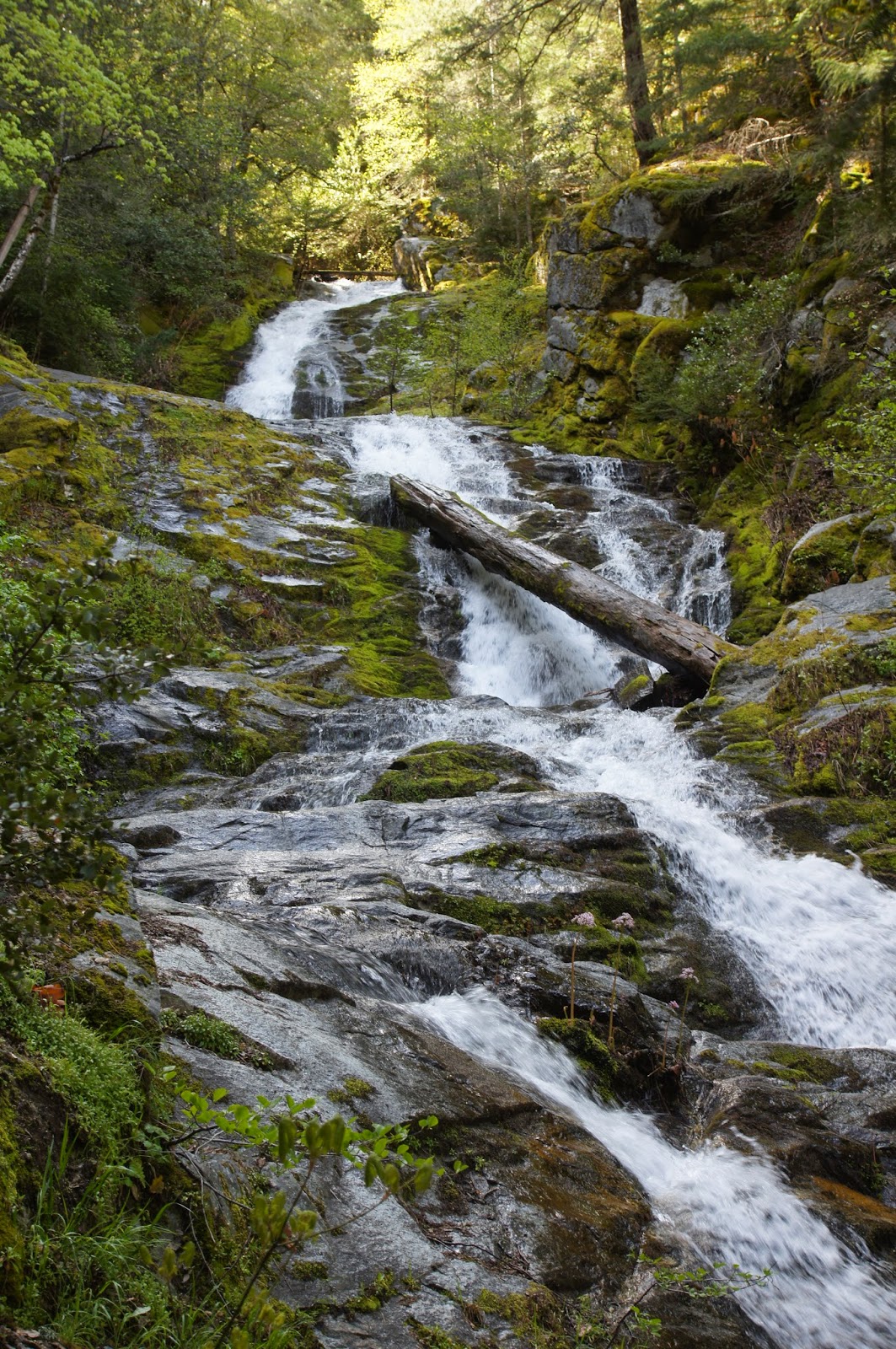 In 2003, after decades of rumors of a large waterfall hidden in the forest, a Whiskeytown National Recreation Area ranger finally located Whiskeytown Falls. In 2005, after the trail has been constructed, this magnificent waterfall was opened to the public. It isn't a true waterfall, but a cascade. An impressive one, to be sure. at 122 meters length and a curve, it is nearly impossible to get it all in one shot.
There's a metal staircase that goes along the waterfall almost to the top. The metal rail was icy cold and the water spray rendered the stairs very slippery indeed. We made it slowly to the top and revered.
The damp vicinity of the waterfall as covered in greenery of all kinds, and some of it was dotted with colored flowers.
The canyon walls all around the waterfall were dripping with water, and a lush, green rock garden flourished all over.
Some of the flowers were to high up for a close up so I had to point Papa Quail and his mighty zoom lens to a tiny white spot way up above:
The girl scouts eventually caught up with us and were waiting patiently for us to descend the narrow and slippery staircase. After a short rest at the bottom of the waterfall we got up to go back. Just then, a park ranger came up the trail and engaged us in conversation.
He wanted to know if we were enjoying the trail (of course we were!), I asked about the local plants, and the elder chika gave him an unsolicited lecture about all the birds we've seen on our trip and made Papa Quail show some photos on the camera screen.
The ranger also suggested we did some more hiking near the Whiskeytown National Recreation Area headquarters. There was an active osprey's nest there, he said. Eventually we said goodby (not before I asked what were those trees with the delicate leaf-vein pattern), and headed down the trail.
We left the girl scouts at the waterfall, and there was no more singing. But still, we didn't see any wildlife that day. Just a couple of all-too-quick lizards. There were many bird songs, though. Some very intense singing came from one particular pine. We spent much time staring at the canopy but never saw the singer.
I did photograph the tree, though. Just in case. 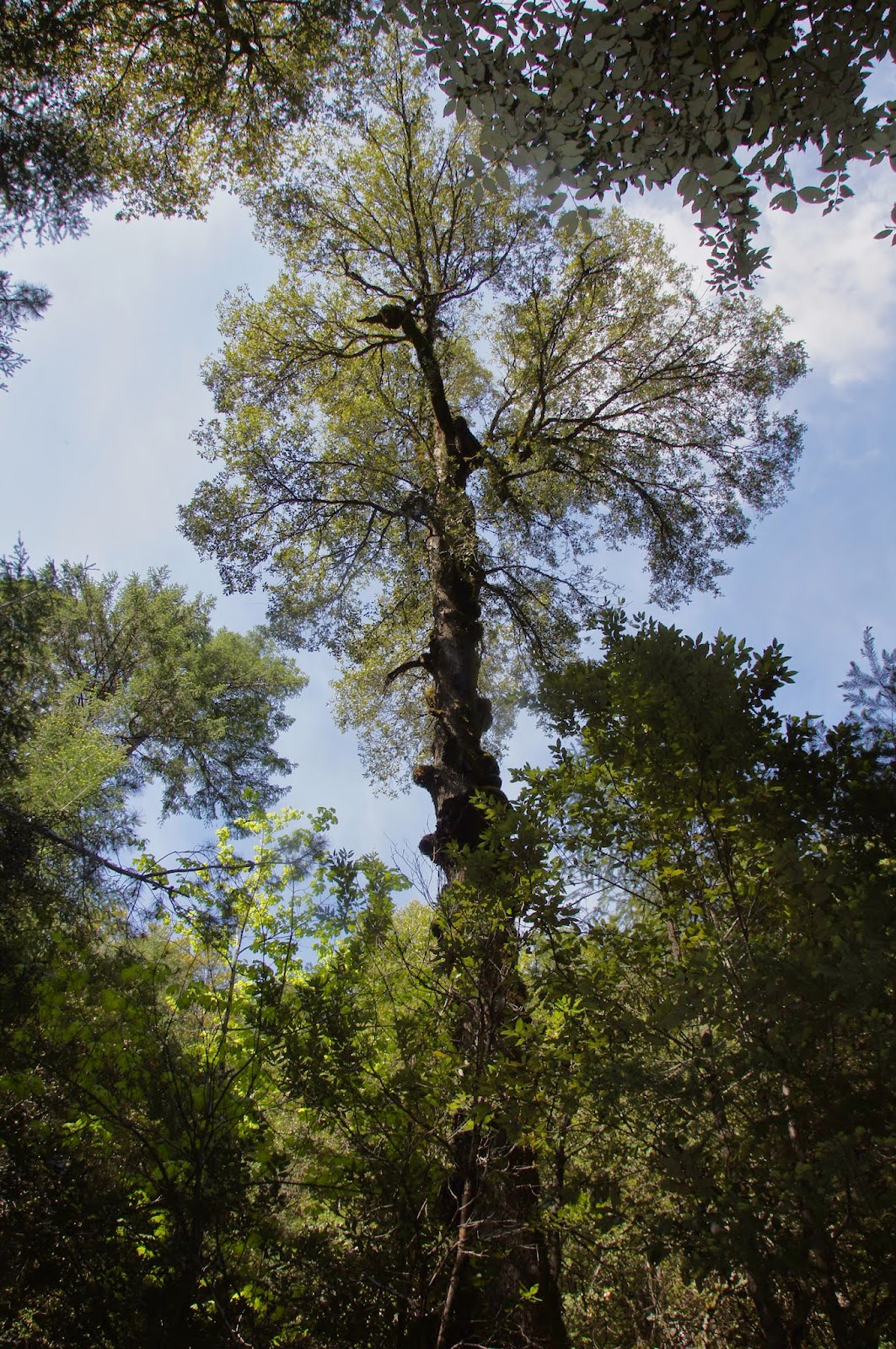 The way down was much faster. The downgrade, and also that I already photographed all the flowers on the way up.
And not just flowers. This one was sighted and pointed out to me by the elder chika:
I have recently learned that this particular mushroom is edible. But even if I had known that at the time of our hike, I wouldn't dare. There are poisonous mushrooms that look very similar and a mistake in identification could prove deadly. And even if I was sure, I wouldn't harvest anything in a protected nature area.
We got back to the parking lot to find it full and overflowing. I guess we did pass quite a few other hikers that morning but had only paid attention to the lovely Redding girl scouts :-) 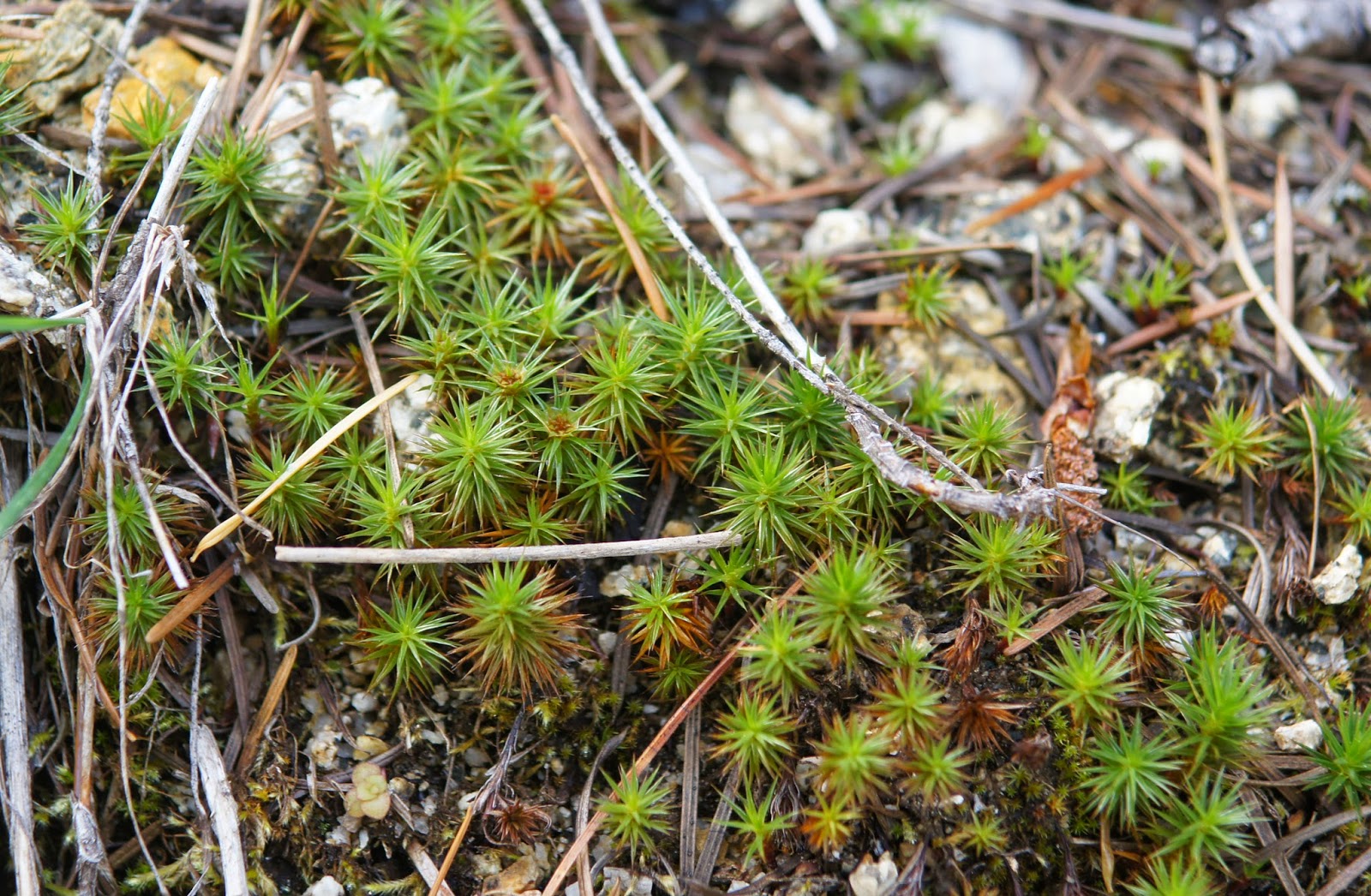 We did it quite quickly. All and all, the trail took us about three hours, including the lengthy conversation we had with the ranger by the waterfall. We almost took his advice to look for the osprey's nest but the chikas started complaining they were hungry so we drove back to town for lunch. I did make Papa Quail pull over for a patch of iris I detected by the roadside.
That was out last day of our spring break road trip and soom after lunch were were going home.
But ... we still had time for one more hike. A very surprising hike, at the Sacramento River Bend.

Many thanks to members of the California Native Plants Society for their help in identifying plants and the fungus!