A Most Gorgeous Coast: The End of Summer at Pillar Point Bluff 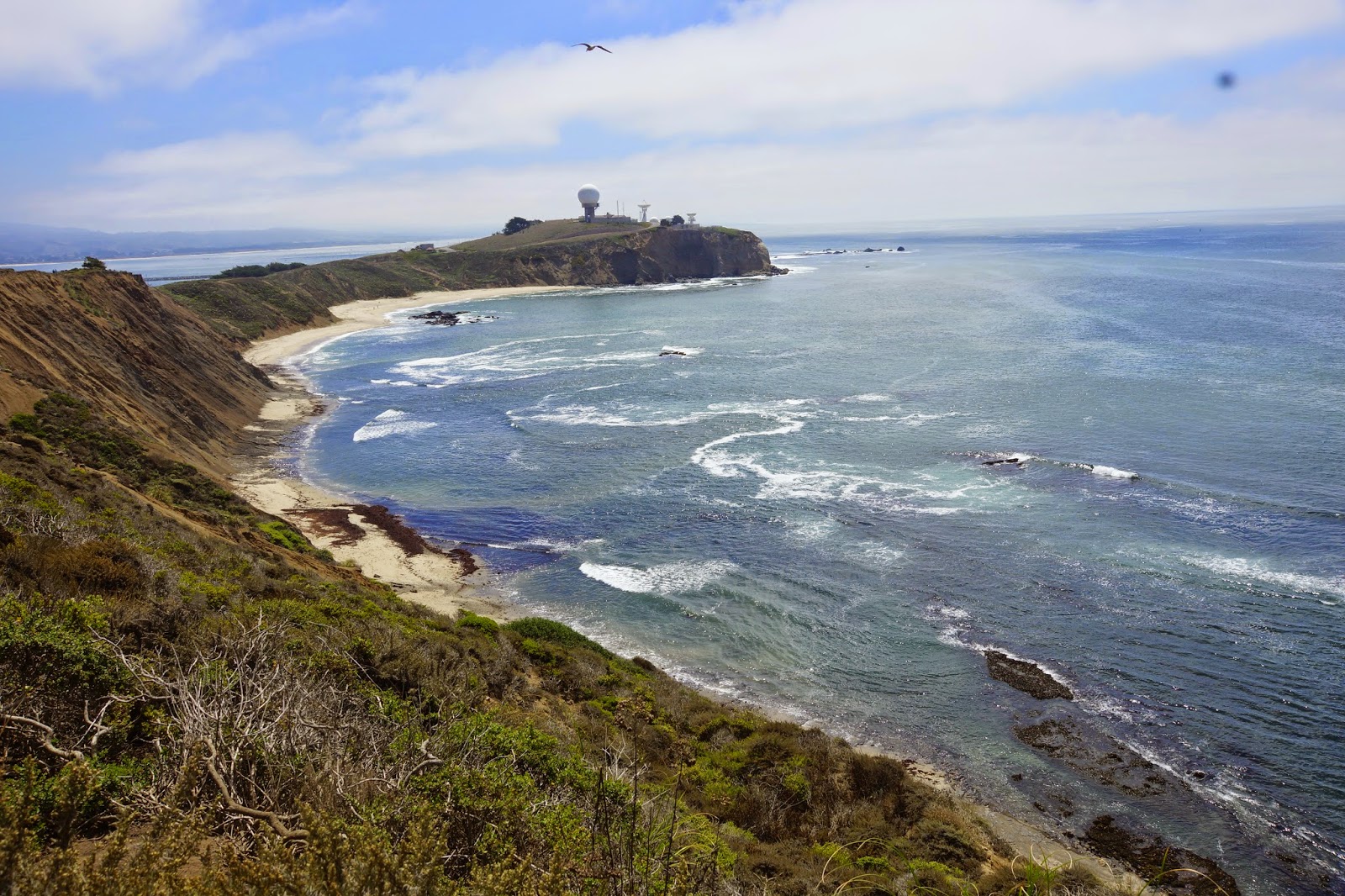 Late summer season in the Bay Area always draws me towards the ocean. The Peninsula coastline is THE place to go for a fine outdoors escape from the inland heat. Pillar Point Bluff in San Mateo County is a great place to go alone or with the family for a nice coastal hike. It's a small park, with a trail system that can be hiked in just a couple of hours. That wouldn't be a good idea, though, because what there is to see in this park takes way more time than that. A perfectly good reason for repeated visits, in my humble opinion.

I hiked at Pillar Point Bluff several times within the past couple of months, the same trail each time, with some minor variations.
There are a few parking options near Pillar Point Bluff. The most popular is the one near the Mavericks Beach, and it is really difficult to find a spot there during weekends, particularly nice weekends.

My favorite starting point is the Jean Lauer Trailhead, at the Airport Rd. entrance to the park. The lot is small, but parking is allowed along the road as well, in case the lot is full.
From there, it is a short and easy trail to the hill. The trail cuts through a thorn field and across a wetland area with signs warning from stepping off the trail, not to damage the sensitive vegetation.
The vegetation there is a combination of California native shrubs and many invasive old-world weeds, like the bull thistle. Their seeds now make a good part of the local songbirds diet.
Crossing the little boardwalk bridge I turned left onto the Jean Lauer Trail, and up the hill. It is a mild ascend, the only one in this hike, if not including a visit to Russ' Cove.
Mid hill, right by the trail, there are a few mugwort plants. I don't see them in bloom very often, so I took the opportunity to photograph the inflorescence. It would have been great if I could also capture the wonderful aromatic fragrance of their foliage!
Up on the hill the vegetation is distinctly coastal. Exposed to the winds and saline mists, the hill top is covered with low, hardy scrub, dotted with an occasional wind-swept cypress. The inner side of the hill features a young pine forest. I followed the Jean Lauer Trail to the north. At the end of summer the scenery there is mostly green and brown, with late flowering plants adding dots and patches of color to the view.
Of the blooming plants there, most prevalent was the common yarrow.
But there was one that stood out among the rest - a pink yarrow.
Not as conspicuous as the pink yarrow, the buckwheat added its reddish hue to the scenery.
But the most common pink in that area at that time was the Pacific aster. In August they were just beginning. By the end of September they were everywhere.
A dominant member of the coastal scrub community, and one of the late bloomers too, is the coyote brush. The multitudes of its little white flowers changing throughout the early fall weeks to shrouds of silky seed parachutes that covered the shrubs and the open areas in between, like exuberant Halloween decoration.
Adding to the 'Halloween look' were the numerous spiders hanging on and between the shrubs.
Jean Lauer Trail curves westward right to the cliff's edge.Viewed from there, if not arriving at the high tide, is Frenchman's Reef: a layer of flat rocks that are very close to the ocean surface, and parts of it get exposed when the tide is low. This entire coastal marine area, from Pillar Point to Moss Beach, is the Fitsgerald Marine Reserve.
Those rocks are heavily used by the local marine life. They make excellent beds for harbor seals.
The seals begin circling around the rocks while still submerged, and climb them as soon as they can to get their well-earned beauty sleep. 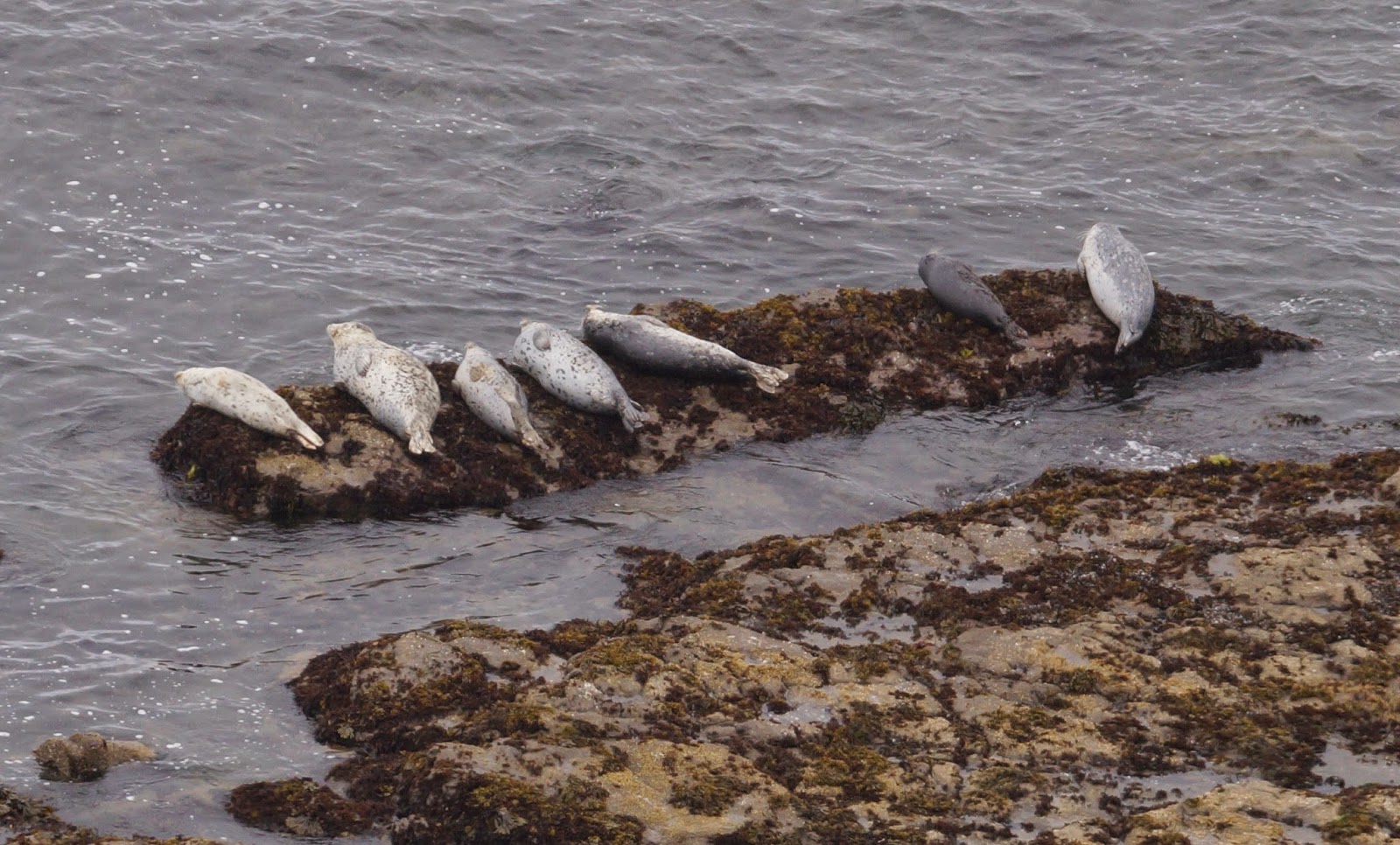 These rocks are more than a bed, they are also a safe haven. One of the seals we saw on those rocks had just escaped a shark attack. We hope it recovered.
Seals, of course, aren't the only marine creatures who use these rocks as a safe perch. Brown pelicans, gulls and cormorants also enjoy resting on them.

Some of those rocks are inhabited by a forest of 'sea palm' kelp. Without a proper scale measure the forested rock looks just like an aerial shot of a tropical island :-)
The trail goes southward along the cliff edge. On the east side there were more lovely flowers.
The dominant color there was yellow.
Bird calls from the scrub were mostly of sparrows. And then there was this house finch too.
Looking west I had the view of the ocean. With a sole pampas grass sentinel. This magnificent grass is an invasive species in California. On one of my group hikes there we encountered a couple of park officials working to remove as much of this weed, and other invasive plants from the area. The particular individual in the photo was spared, probably due to its precarious location.
Totally understandable. There is a shear drop from the cliff's edge to the rocks below. The cliff itself isn't rock but packed soil. Many cracks run along the cliff edge, and that entire section of the trail Appeared unstable. I took a quick photo and retreated back to the main trail. 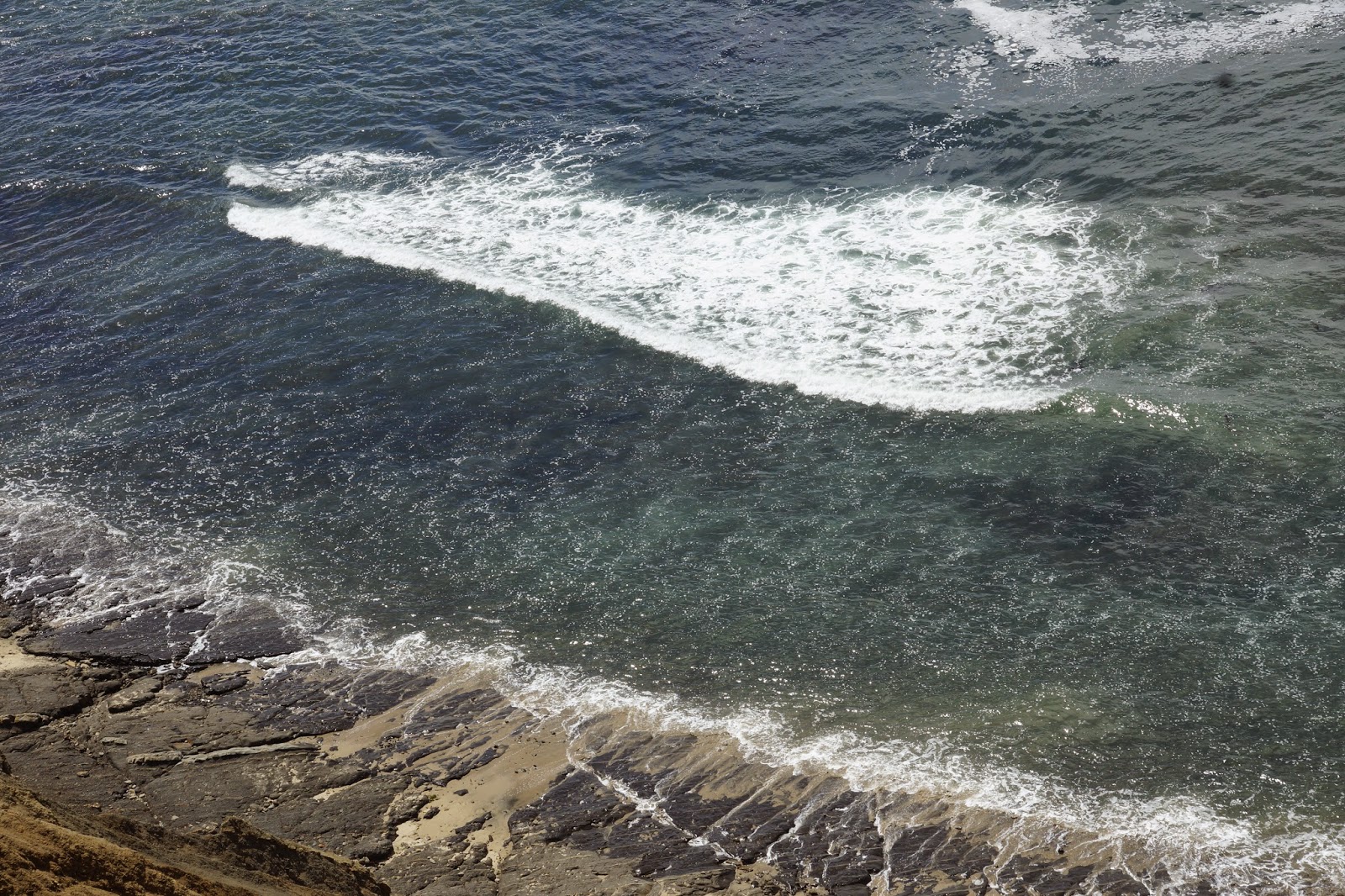 Not all the worthy sights meant looking down, though. Marine birds were flying back and forth along the coastline.  A vulture sometimes followed suit.
At that point the trail leaves the county park's area and continues through an open space behind the Pillar Point Air Base. This trail leads down, directly to the West Point Avenue parking lot and the Pillar Point Harbor.
There is, however, a trail that leads down the more manageable section of the cliff, to Russ' Cove and Mavericks Beach.
This is a most beautiful beach that's worth the effort of scrambling down the steep and eroding trail. One needs to watch one's step there, and not be shy of butt-sliding down if feels needed. Those who dare are rewarded with a magnificent beach with stunning beauty and violent currents. The underwater rock plateau, so close to the surface, adorns this coastal area with very high waves, which make it a huge attraction for surfers, among which it is known as the Mavericks Beach.
Every time I went down to the beach I was reluctant to go back up. Children are even harder to convince to leave :-)
Once up, though, The trail continues through the scrub in a mild slope downward, to West Point Avenue.
Nice flowers there too.
And interesting fruits.
But at areas of less scrub coverage, sounds of shuffling and quick moves caught our attention. The children in these hikes were much better than me in spotting these pretty and very quick lizards. I was lucky enough to have one stand still briefly for a photograph.
I must admit that on my first hikes there I completely overlooked this. One of the curiosities of that area is a mural(?) painted on an exposed cement support of a cracked old private road on the hill slope. I still go back and forth in my mind whether it is a good idea to have a such colorful artwork in a nature area. After all, as rock-like as it is, cement isn't natural (nor is the road itself), and the artwork definitely is pretty and well done. Then again, it doesn't feel like it belongs there. More like something that was grafted into the place from urban civilization.
The painting portrays Half Moon Bay. 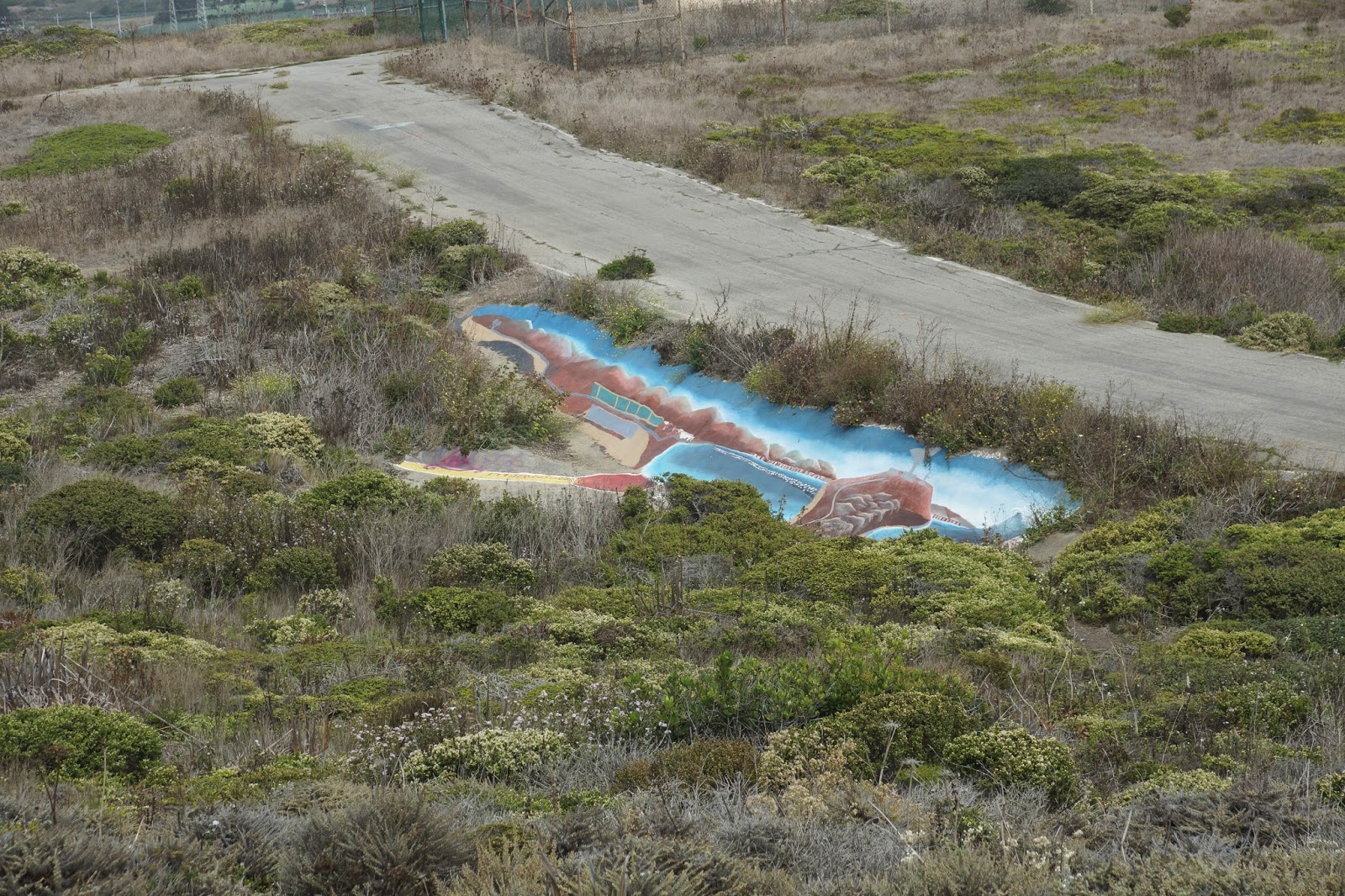 Looking up over the hill slope, one can see the Half Moon Bay itself, in live.
Between the cypress trees and the harbor there is a green area of wetland with alkali weed and little jewel-like ponds. This is Pillar Point Marsh.
The trail leads directly to the parking lot that borders that marsh. At that parking lot begins a short, 0.3 mile long trail that goes along Pillar Point Harbor and a little beyond to another lovely beach that terminates with the rocks of Pillar Point descending directly into the ocean.
That area is one of the richest and most beautiful tide-pooling areas I've been to in California. With careful planning, most of my hikes there have been in perfect timing with the low tide. The amazing wildlife I've seen there merits its own blog post: the next one will be dedicated solely to that little trail and the tide pool prize at its end.
The Pillar Point Marsh itself also worth a close observation. The ponds are often prowled by egrets and herons. But one of my visits there with Papa Quail we noticed red-necked phalaropes swimming to and fro in one of the ponds. Do not look for the red neck in this photo - it shows only during breeding season, and only on the females. This bird is one of the very few examples in the bird world where the female gets to be more decorated than the male.
Behind the ponds there is a spill-over parking lot and once we had to park our car there. After the hike I went by myself to bring it over to the trailhead and on the way I had a chance to photograph another pretty coastal flower: the common evening primerose.
No better sight to conclude a hike with :-)


Many thanks to members of the California Native Plans Society for their help in identifying plants!