Where Two Worlds Meet: The Tide Pools of Pillar Point 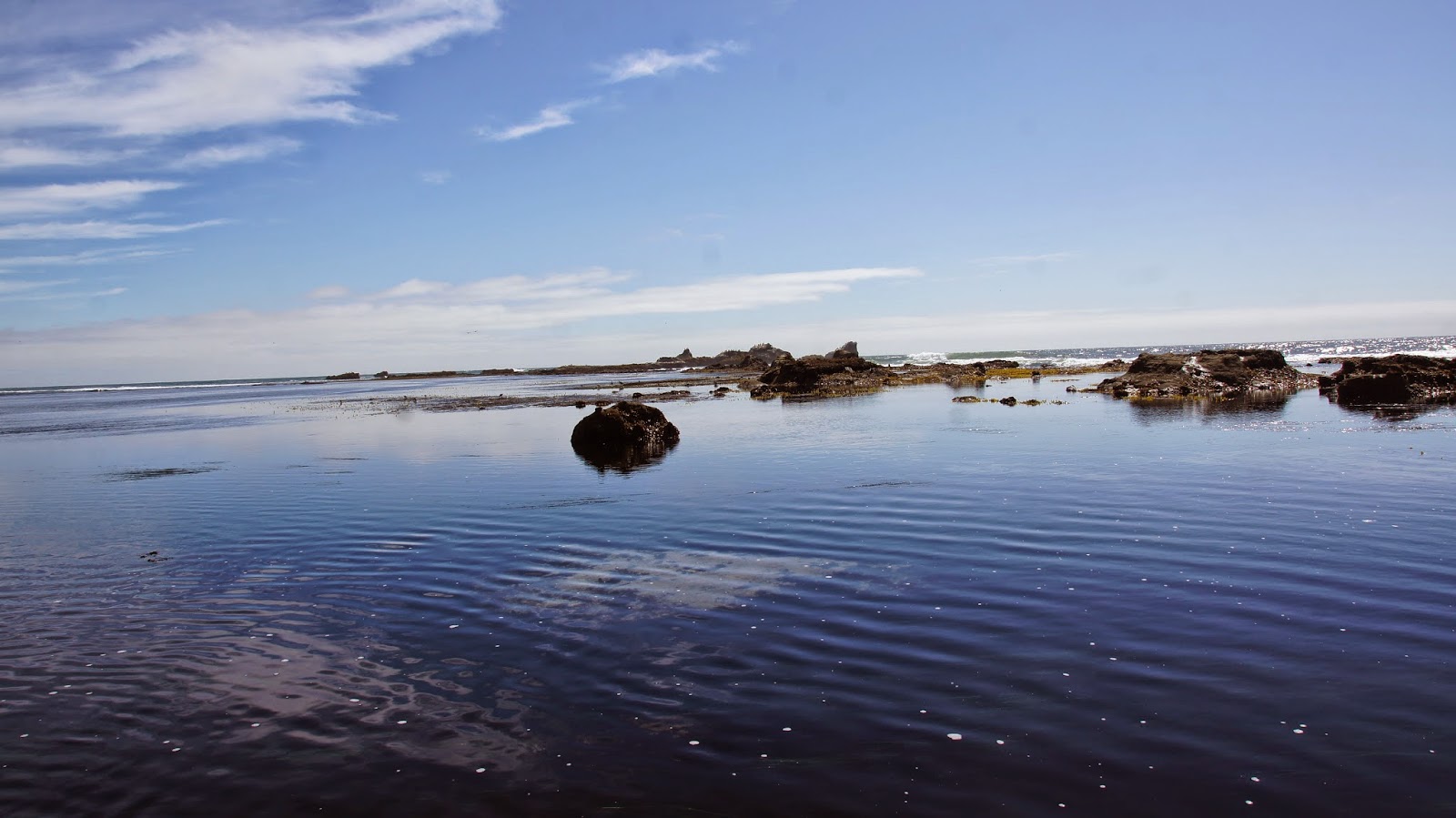 Visit time: August-September, 2014
Place: Pillar Point, Half Moon Bay, California
Tailhead coordinates: 37.501549, -122.496706
Length: 0.6 mile in and out
Difficulty: very easy. Accessible to wheelchairs only up to the Pillar Point Harbor breakwater.
It was mid-winter, 12 years ago, when I visited the tide pools of Pillar Point for the first time. The tide was very low. So low, that we could walk quite far out into the ocean on the rock tops. I had joined then a UC Berkeley algae class field trip, and was thoroughly impressed with the richness of seaweed species and other tide pool life I've seen there.
While trying to time my last summer's visits to that place with the low tide, I haven't managed to be there when the tide was at its lowest. Of the semi-diurnal tide cycle, it was the high-low tide that happened at day light on my visits, and the tide pool area was under water.
Under very shallow water, though. Ankle to knee-high only, in most areas. And the water temperature was surprizingly tolerable. So, with a pair of flip-flops and rolled-up jeans I waded in the water, slowly and carefully, not to step on anything, not to miss anything.
Pillar Point tide pools are part of the Fitzgerald Marine Reserve. Removing, or in any other way damaging anything there, living o not, is strictly forbidden. Exploring up close, however, is encouraged. There are classes, tours and field trips that are offered there and also online guides for  independent visitors who wish to learn about the wonders of the Pacific Coast tidal zone.
The tide pools area is protected from the open ocean waves by a natural wave barrier of protruding rocks that extend from the point of Pillar Point southward. Beyond these rocks - high waves and many brave surfers enjoying the adrenaline rush that can be found at Mavericks Beach. Inside the rock barrier: calm water, and relatively warm (relative to the north-pacific normal blood-curdling temperatures, so to speak).
Other than breaking the waves, these rocks also double as bird roost, seal bed, and a sea palm orchard.
The shallow water makes marine life there accessible not only to human visitors. Shore birds are happy to feast on the rich, daily spread offered to them at the tide pools.
And some are fond of cracking hard shells.
I am always happy to see oystercachers. And this was as close as I've ever seen one, about 20 yards away. Pretty bird.

The rock barrier stops the waves from coming in. It also prevents the fish from going out. The high-low tide is high time for brown pelicans to go looking for trapped fish in the tide pools.
I love to go tide-pooling. I am fascinated by the life in the tidal zone, life adapted to a world in-between worlds. A world in tune with the lunar cycle.
And a particularly fascinating tidal zone resident is the hermit crab.
Not having an armor of their own, hermit crabs seek shelter inside empty snail shells. A hermit crab carries its hand-me-down house everywhere and when it outgrows the shell, the crab replaces it.
There are many snail species at Pillar Point tide pools. All of them make nice houses, don't you think so?
Hermits aren't the only crabs there. And looking for crabs seems to be the number one activity choice of visiting children. This one was found by a very active pair of sisters who allowed my young chika to hold it for me to photograph.
But most crabs remained out of reach. Better for them.
Whenever children are present, the levels of excitement are sky-high. While adult visitors roam the beach with reserved appreciation, the children are all over the place, digging in the sand, looking for shells, and wading in the water inspecting the sea anemones and hermit crabs. I was amazed at the ease in which kids who never met before group together and collaborate on an impromptu project or a role-play fantasy game, involving whatever players and props they can find.
And on one of my visits at Pillar Point, the young playwrights had cast hermit crabs as the stars of the show.
I have mixed feelings about this kind of play. I feel for the poor crabs. I can't imagine them being happy with this. On the other hand, it is exactly this kind of direct, uninterrupted interaction of children with Nature that grows and empowers the next generation of naturalist and nature-conservation activists. It is the children who touch and explore that grow to be the passionate adults who care.
I curbed my urge to interfere, but maintained a close watch. At some point my own chikas had joined the game and I took the opportunity to instruct them that these crabs should be released back to their habitat soon. And I was relieved to see that they were.

A few children moved away from the crab game and got busy with another creative activity:
My own chikas enjoyed playing with the stranded seaweed, designing mermaid outfits and playing out mermaid fashion shows.


I was very busy on my beach visits looking down, searching for marine life. Papa Quail, on the other hand, was also looking up.
With all of them shorebirds about, raptors wouldn't stay perched now, would they?
As hard as it is, the time for leaving the tide pools always arrive. And that short trail to the parking lot has many interesting sights as well. Enough to slow the nature-lover's walk to a crawl.
I didn't look too often at the hill, but did notice that morning glory that was blooming there.
On the other side, though, the beach was covered with decaying seaweed.
As the summer progressed into fall, more and more kelp was washed ashore and piled up in rotting composting heaps. The mounds were buzzing with kelp flies that rose in small, dense clouds with each step. The odor of seaweed decay was heralding the arrival of fall.
Kelp flies lay their eggs in the rotting kelp and their larvae live off it. The multitudes of flies make fine dining for many birds, including these young starlings that were hopping about below the breakwater.
Other birds enjoyed the fly spread in solitude.
Shorebird species come in huge variety of leg and beak lengths, each species evolved to forage at a very specific depth of mud, in search of very specific types of mud-dwelling invertebrates. The amazing variety of shorebirds alone is an indicator of the richness of life hidden in the mud of the tidal zone.

I usually don't pay too much attention to seagulls. A good thing Papa Quail does, though. Otherwise we might have missed this one, which we hadn't have a photograph of before.
This summer, California beach goers have noticed a strange phenomenon: a small, blue, jelly-like creature called, Valella valella washed ashore in huge numbers. I have heard about it in the beginning of August, but had to wait untill after my backpacking trip with my young chika to the Caribou Wilderness before I could go down to the shore and check this out for myself.
These creatures are polyp colonies that float on the ocean surface and filter the water for plankton: microscopic organisms.

When afloat, their blue hem is submerged. But freshly washed ashore, these creatures are absolutely magnificent.
Inside Pillar Point Harbor the water is calm and the beach is inviting. There too, shorebirds patrol the shallows in search of food.
And wherever there are flies, there would be flycatchers.
Resting afloat, these Heermann's gulls. Their call reminds me of a cat in distress.
Harbor seals also enjoy the calm waters of the harbor. Unless there is a busy sailing meet happening, of course.
And basking in the sun - a lizard. The only reptile I've seen at Pillar Point in all of my visits there.
And high above, looking for fish: a tern, poised for a dive.
And as we were getting closer to the parking lot we saw at the same altitude, looking for other creatures: a kite.
As I wrap up this blog post I marvel at the richness of wildlife, by number and variety both, that can be found along such a short trail. It is a short trail, alright, but it is a meeting place of two worlds that brings together residents of each and hosts an entire community that specializes on treading the borderline of these two worlds.
May this place remain forever wild.


And a special bonus: a scene from the movie 'Finding Nemo', played out by local actors at Pillar Point Harbor.