Inside and Out - Hiking Sentinel Cave at Lava Beds National Monument 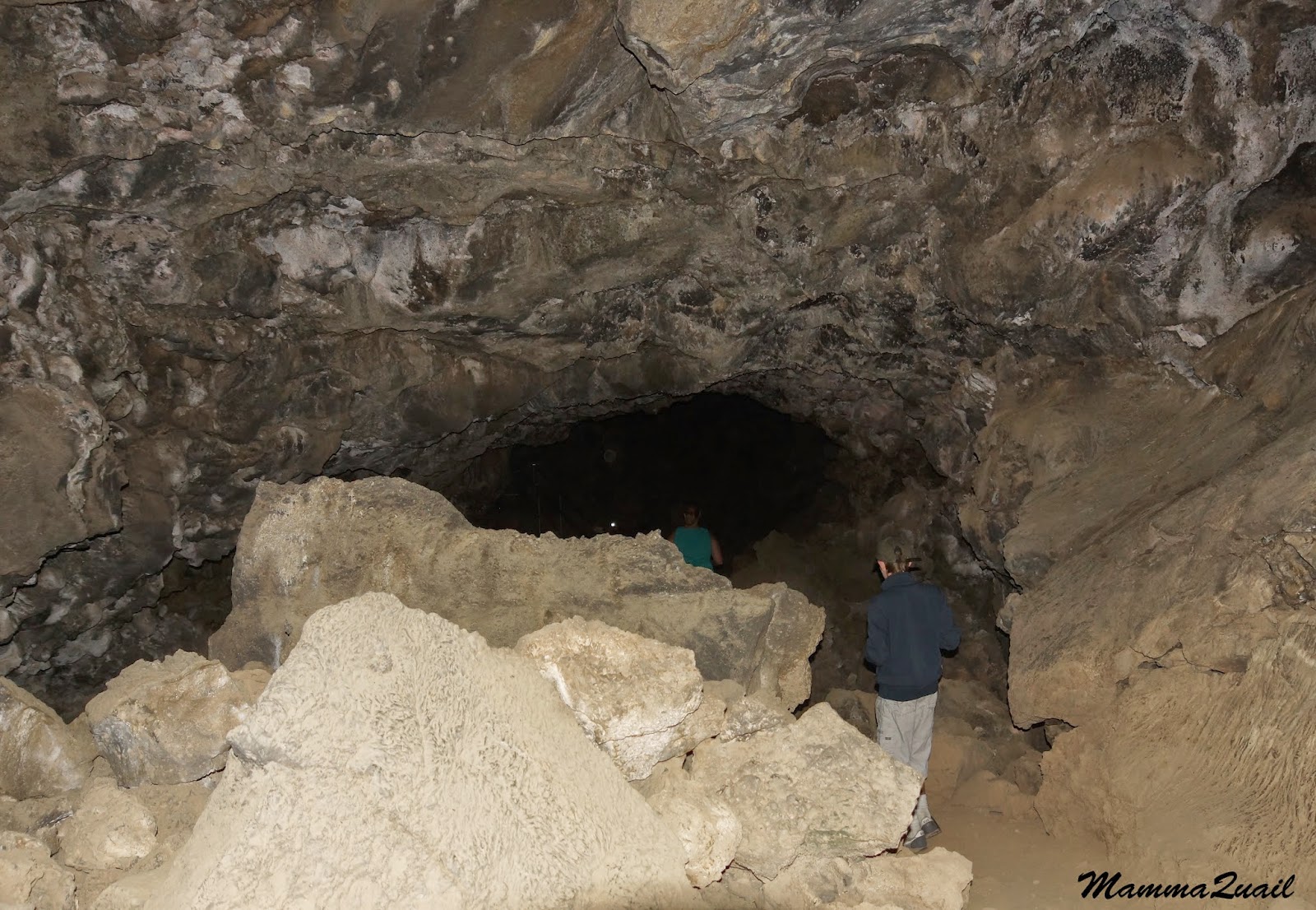 Whenever we have visitors from afar I offer to show them California's beauty. And who would resist such an offer?  When my sister came with her family last summer they I planned a southern cascade tour with them that included Lassen Volcanic NP, Crater Lake NP and MacArthur Burney Falls SP. In between that tight schedule I managed to squeeze day at Lava Beds National Monument.
It has been nearly a decade since last time I was there. The remoteness of that place has so far eliminated it from other tips we had done in Northern California, but this time I was able to secure it in our schedule.
It might have been the promise of a 50°F place in the middle of a very hot July that won the overall support of this 200 miles diversion from our main route.
Lava Beds National Monument is east of I-5, a tad south of the Oregon border, in a geological area called The Modoc Plateau, after the Modoc Native Americans.
When we arrived there it was nearly lunch time so we stopped for a picnic at Captain Jack's Stronghold.
The first thing I saw when I left the car was these bright yellow flowers near the parking lot.
It was only after taking care of lunch that I got my camera and went to look at the blazing stars.
Nearby were milkweed plants in full bloom. These too had attracted my attention.
And not just mine.
The milkweed attracted more than flies and butterflies. The plants I saw were covered with aphids: small sap-sucking insects who tap into the plant's phloem and drain its precious bodily fluids. I was surprised to see how well the milkweed plants looked considering that their stems were nearly completely covered with these yellow buggers. 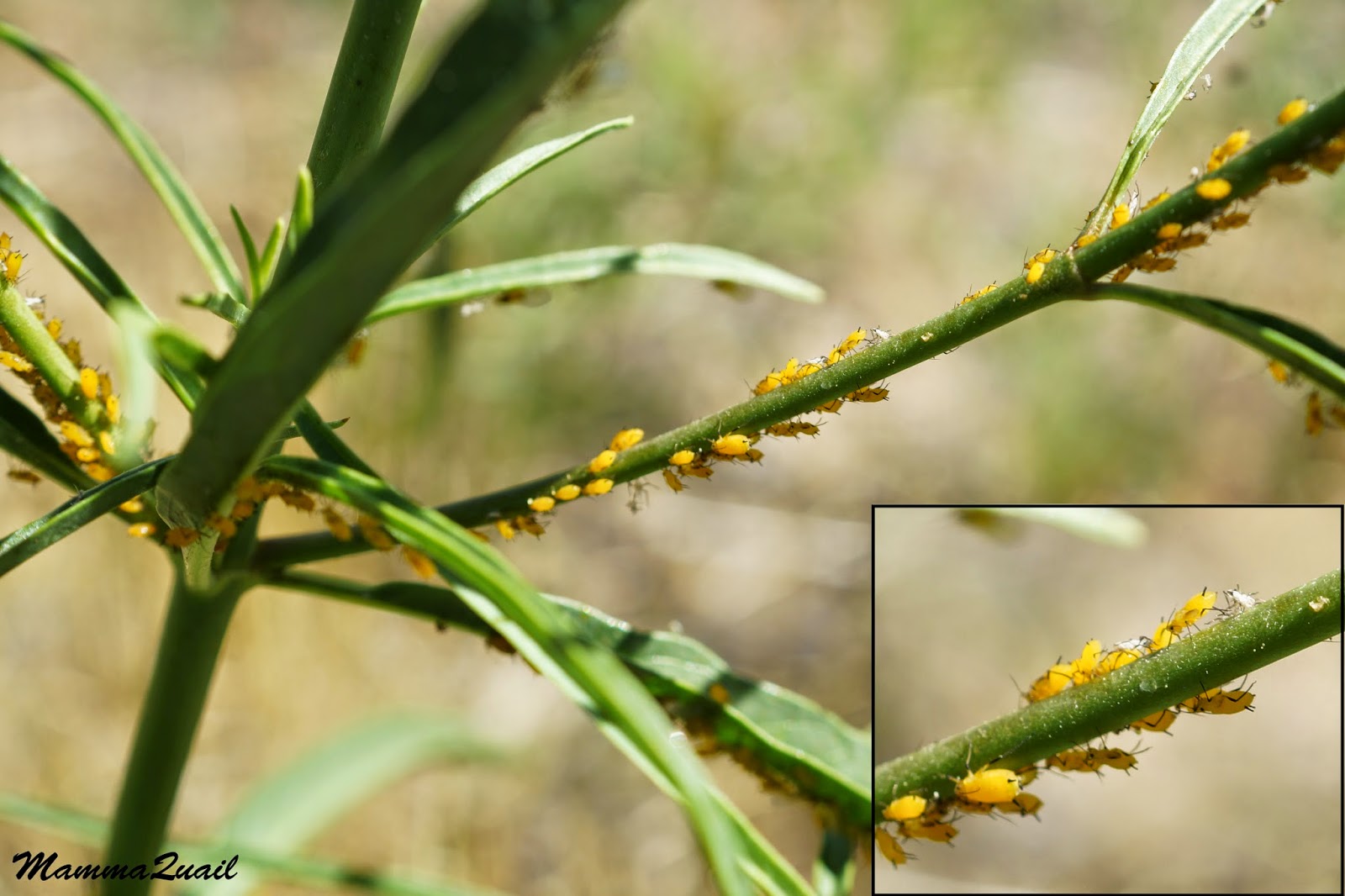 After lunch we headed south to see the caves. We went down the Mushpot Cave which is lit and nicely paved for easy access. Mushpot Cave is a very nice lava tube. It is well lit and is arranged for easy access. The park also offers guided tours in that cave.
From Mushpot Cave we continued along the main cave loop road. Along that road loop and the surrounding area there are several accessible lava tubes. All of these caves belong to the same lave tube system. They are the remains of a large lave river that flowed across the Modoc Plateau when the nearby volcano erupted years ago. The lava that came in contact with the outside air cooled and solidified, forming a crust inside which the lava river continued flowing, splitting into rivulets and spreading as a large delta. When the flow ceased there were empty tunnels left behind - the lava tubes.
We were looking for a lava tube that was easy to walk through and Sentinel Cave seemed a good one to choose.
The entrance of Upper Sentinel Cave is right by the road - we parked the cars, took our flashlights (that cave isn't lit) and headed underground.

Papa Quail lingered behind to photograph a busy family of scrub jays  at the cave's entrance.
Us Quails had visited lava tubes before, and I even posted here about the Subway Cave near Lassen Volcanic NP. So the chikas knew what to expect. For their cousins, however, it was the first time, and they were absolutely thrilled!
My sister, (and all of us really), was very relieved to go underground. Outside the temperature s were in the 90's but inside the lava tube it was 50 degrees. before long everyone in our group had donned the sweaters I made them take along.
We walked slowly in the darkness, illuminating our way with flashlights. Sentinel cave isn't a very long tube and isn't difficult to traverse. The trail inside is mostly level although narrow at parts.
I didn't take many photos inside the cave. The lava tube experience isn't captured well in photographs anyway. 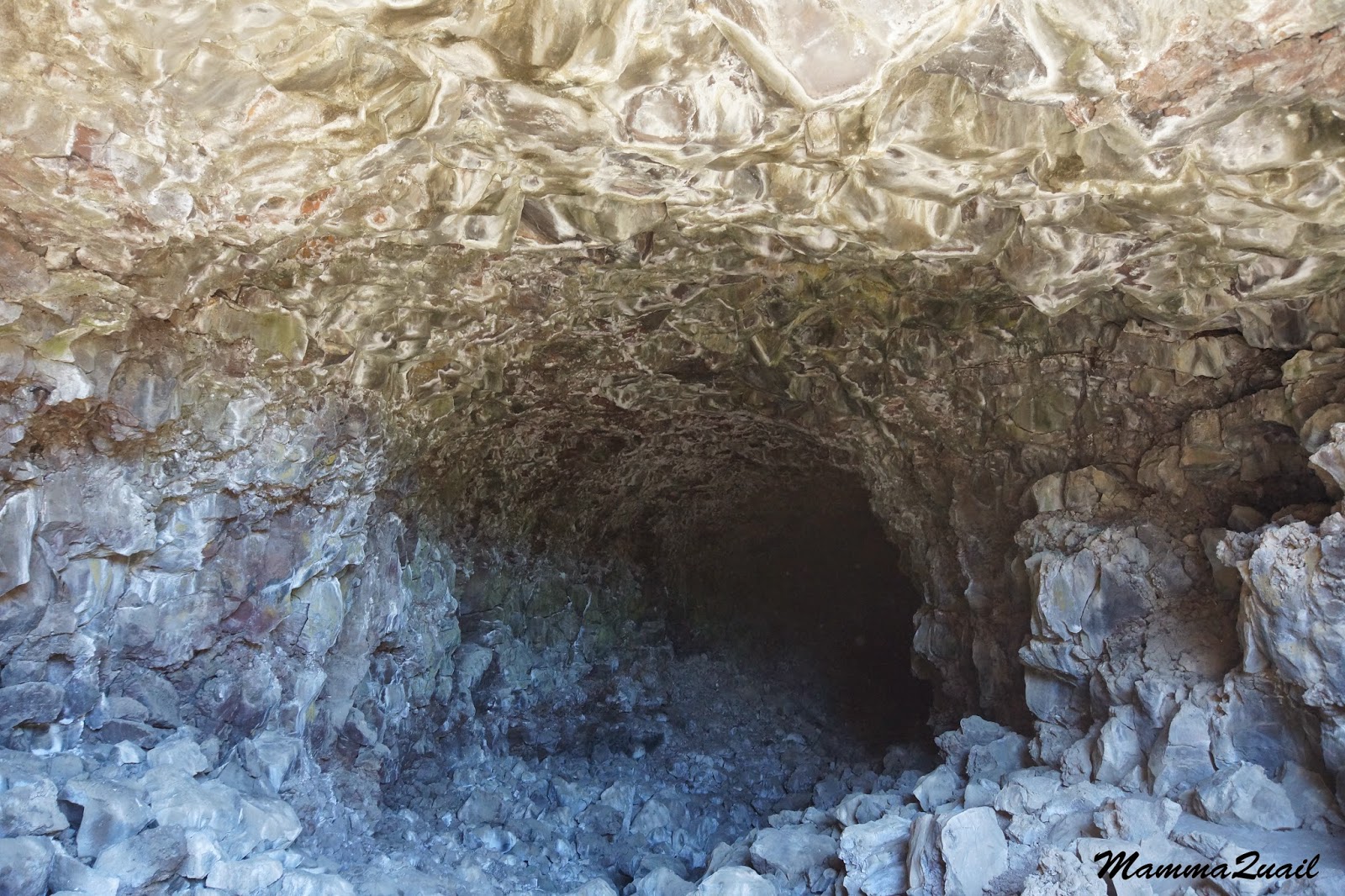 Emerging on the other side of Sentinel Cave we were once again exposed to the blazing sun. It is amazing how quickly the cave's coolness dissipates in July's noon.
From the far end of the lava tube, or Lower Sentinel, as it's labeled on the park's brochure, there is a nice and easy little trail leading back to the cave loop road. The trail is completely exposed to the sun and the view from there is that of the Modoc Plateau, with peaks on the horizon and a prominent cinder cone butte nearby. There is a trail to the butte's crater that Papa Quail and I hiked on our first visit to Lava Beds years ago. I looked at it longingly. There was no chance of convincing anyone of our party to go up there in that heat.
Our hike back to the road was as slow as the walk through the lava tube. There was a lot to see along that short trail. Nice flowers, for starters.
Hot as it was in July, blooming season was on in full force. Modoc spring starts later than the coastal area and summer is shorter. There's a lot for the plants to accomplish in that short time.
And where flowers bloom, there go the insects. Flies, bees and butterflies were fluttering all over the place. Butterflies are one of the hot reasons to visit Lava Beds NM during summer. They are magnificent and they are everywhere!
One of the common butterfly species at Lava Beds is the Leanira Checkerspot. I learned they come in more than one pattern.
There were many other insects buzzing around beside the butterflies. But I didn't expect to see a dragonfly there, in such a dry place. But there is was - sitting atop a tall bush. I had to get Papa Quail to photograph the bug with his big zoom lens to get a decent photo.
Papa Quail had been busy too. As always, he was after the birds. There were many of them out and about as well.
It takes a lot of patience to get a good photograph of a little bush bird. I always admire Papa Quail's ability to catch the birds at the split-second in which they sit still.
The only so called tree in the area is the juniper. Most of the junipers there act as pushes, but some can be bigger. They too, are a good perch and hideout for birds.
The lava tubes system in that area is huge. Some of these caves have collapsed and can be seen from above ground as large basalt-cobble trenches. 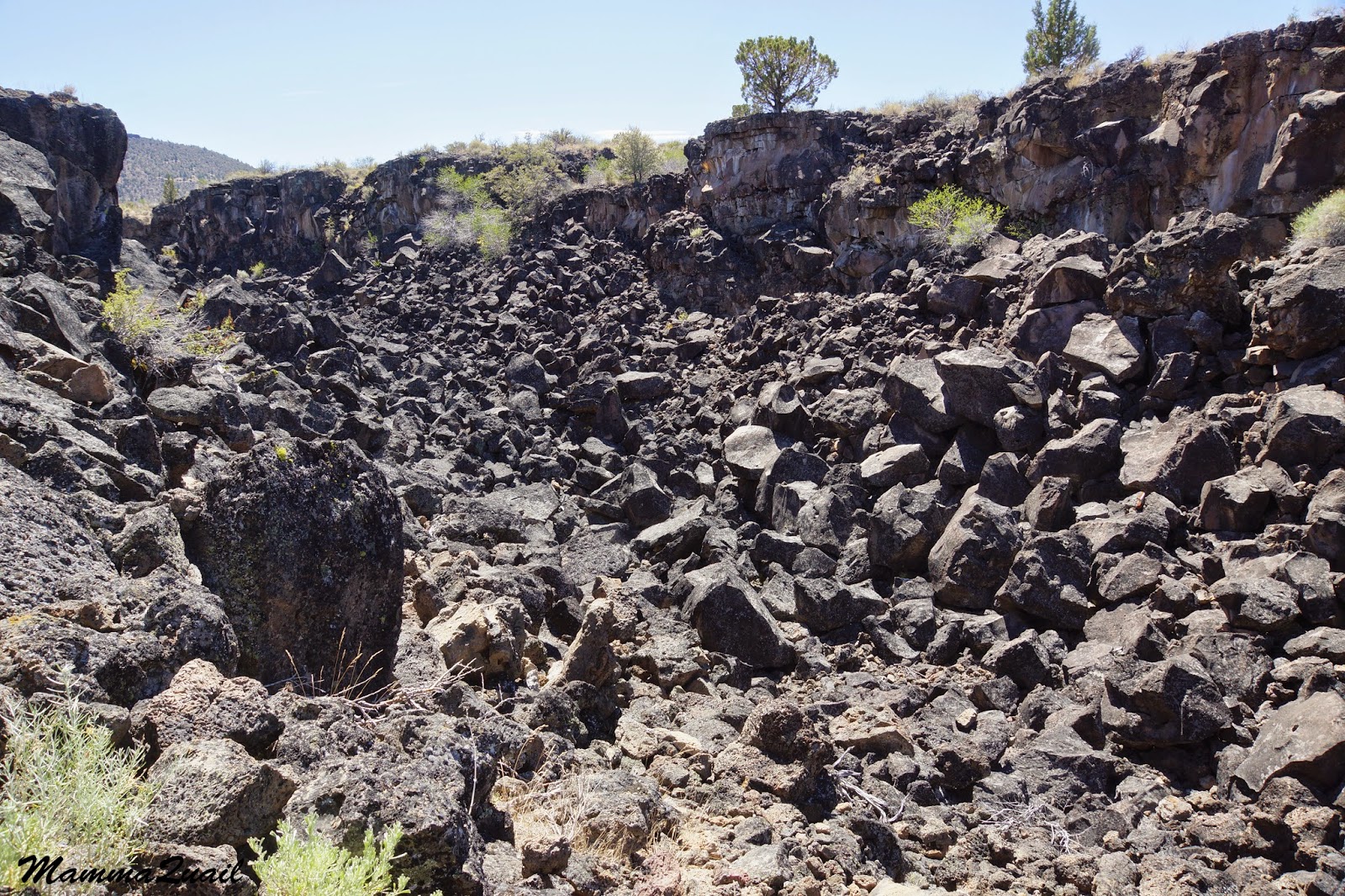 The black rock rubble is an excellent hideout for squirrels. Not all of them hide, though.
It's a short trail from the cave to the road. Many plants there were blooming - but nearly all of them hiding shyly under bigger shrubs. Some, though, have too conspicuous a color to hide with any effectiveness.
To see others I had to bend deeply because they were too close to the ground.
But the biggest and most pleasant surprise was a species of mariposa lily I was not familiar with. Beautifully pink, the sagebrush mariposa lily had its flowers sticking only a tad higher than the tall, dry grass. I almost missed it.
Almost missed the first one, that is. Seeing my excitement, the chikas got busy and found me more mariposa lilies to photograph. There were many of them along the trail and once I was aware of them, I could see them all around.

Eventually even that trail ended and I arrived at the car well after everyone else in our group. We had planned to see one more cave but on the way there one of my chikas fell asleep so I remained in the car with her while the others descended underground one last time. 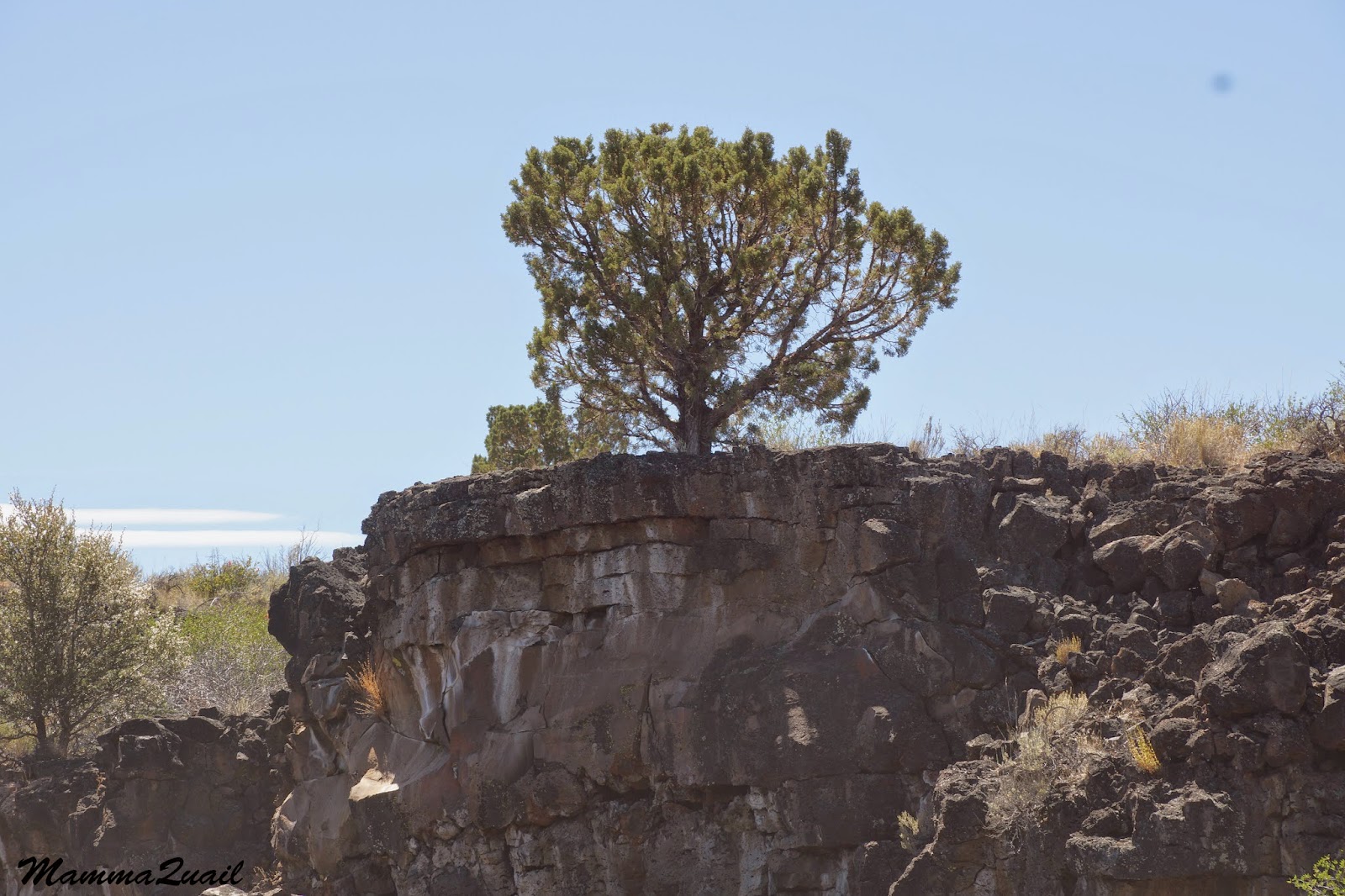 One day really isn't enough time to see all the wonders of this lovely and remote park. I love its remoteness, but that also means it'll be some time before I go there again. Perhaps I need to snare more unsuspecting visitors and convince them that this is exactly the part of California they must see. And I have backing for this claim too - my sister and her family had a wonderful time at Lava Beds National Monument :-)
We spent the final daylight hour after leaving Lava Beds at Tule Lake National Wildlife Refuge and then drove south to Redding. The following day, which was our last day of that road trip, we took our visitors to see Burney Falls. From there it was a long and tiring drive home where we would spend only a couple of days before embarking on yet another road trip to Kings Canyon National Park, and all that because my sister claimed that I promised she could see bears in nature.