Lake Alpine is a popular summer vacation place. One look at that lake (a reservoir, really) and it's clear why. High up in the Sierra Nevada Mountain Range, this small,calm lake is like a precious blue jewel, sparkling in the bright sunlight. With several inviting beaches, a couple of resorts and heavily-used campgrounds, the lake area was filled up to a choke with Labor Day vacationers.
I suppose that included us, as well.
Finding parking at any of the lake access points proved to be quite a challenge. After a slow drive through all the parking lots on the north shore we managed to squeeze the cars on the roadside of Hwy4 at the very northeastern tip of the lake, just before the turn to Pipe Marten campground.
I bravely resisted the children's begs to stop at the first beach. I promised we will go to another beach on the other side of the dam but even so it was hard to direct our no-delay gratification offspring from the waterfront to the hiking trail.
After detaching from the beach we plunged into the woods with gusto and got underway on a really good pace. Before too long, though, we got side-tracked again. This time by a big and beautiful pile of granite rocks. Within the 2 seconds it took my to switch on my camera the rocks were conquered by our jubilant group of youngsters, all happily practicing their primate climbing skills with varying degrees of success and their social graces and un-graces with absolute perfection. It took even longer time than at the beach before they were all off the rock and walking again.
Meanwhile I I walked over to the nearest flower and photographed it.
There weren't that many plants in bloom at the time, but evidence of those that were not too long before were everywhere.


The slope grade was very slight. We were ascending without feeling it at all. Then we broke out of the woods and found ourselves way up above the lake, at the edge of a sheer granite cliff. 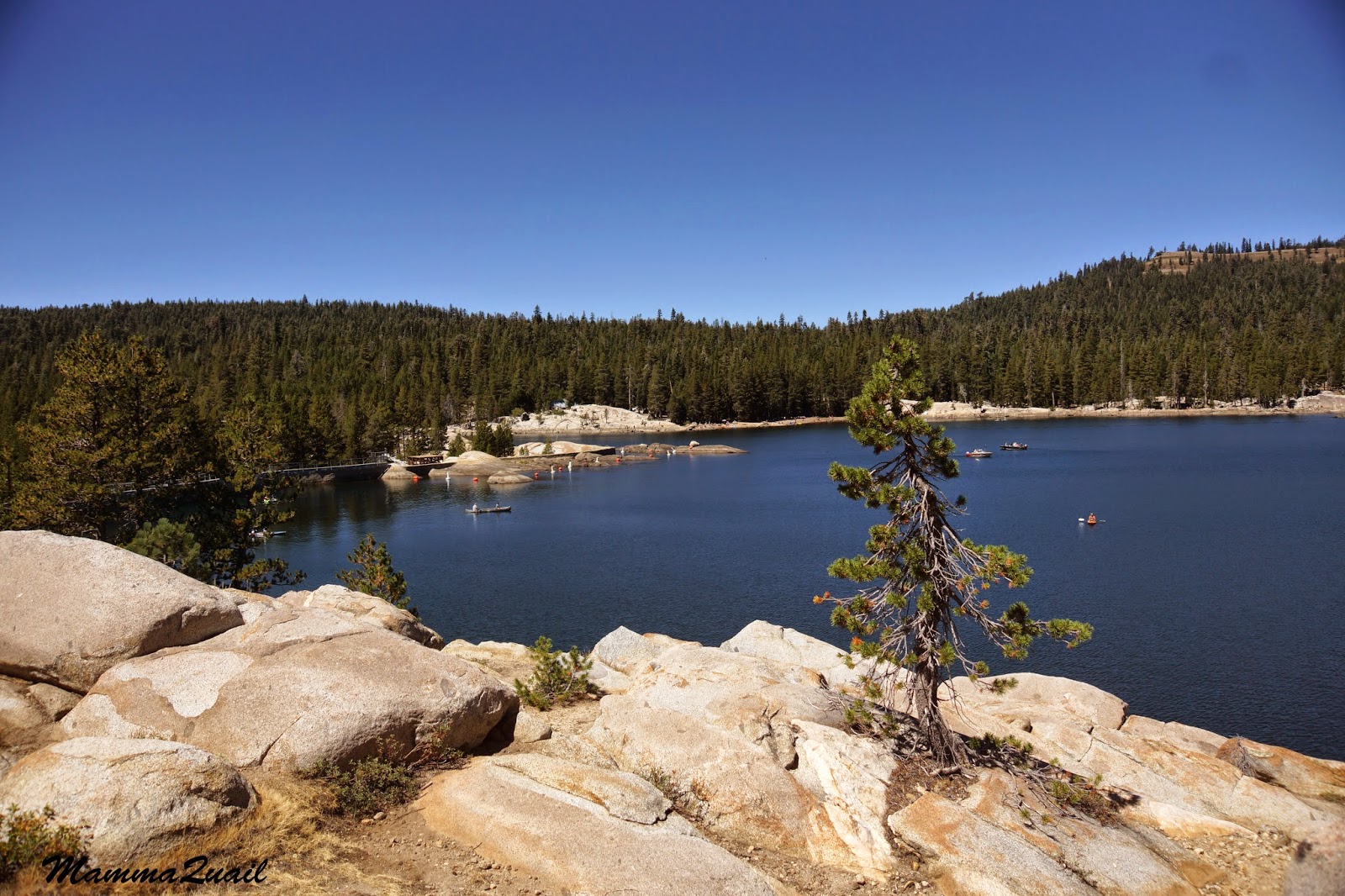 The view was stunning. We sat there for a while, eating and relaxing. I found a blooming penstemon and was happy.

Then the youngsters tried to find out how far they can scale down the cliff. That was our cue to move on. The youngsters complained but eventually came along. Three of them were playing silly games with the radio communicators and kept being yelled at by the others, until the other dad ordered them to stop, threatening to confiscate the radios. Eventually he did take a communicator from one of the kids and handed it to me. I shrugged and hanged it on my belt. 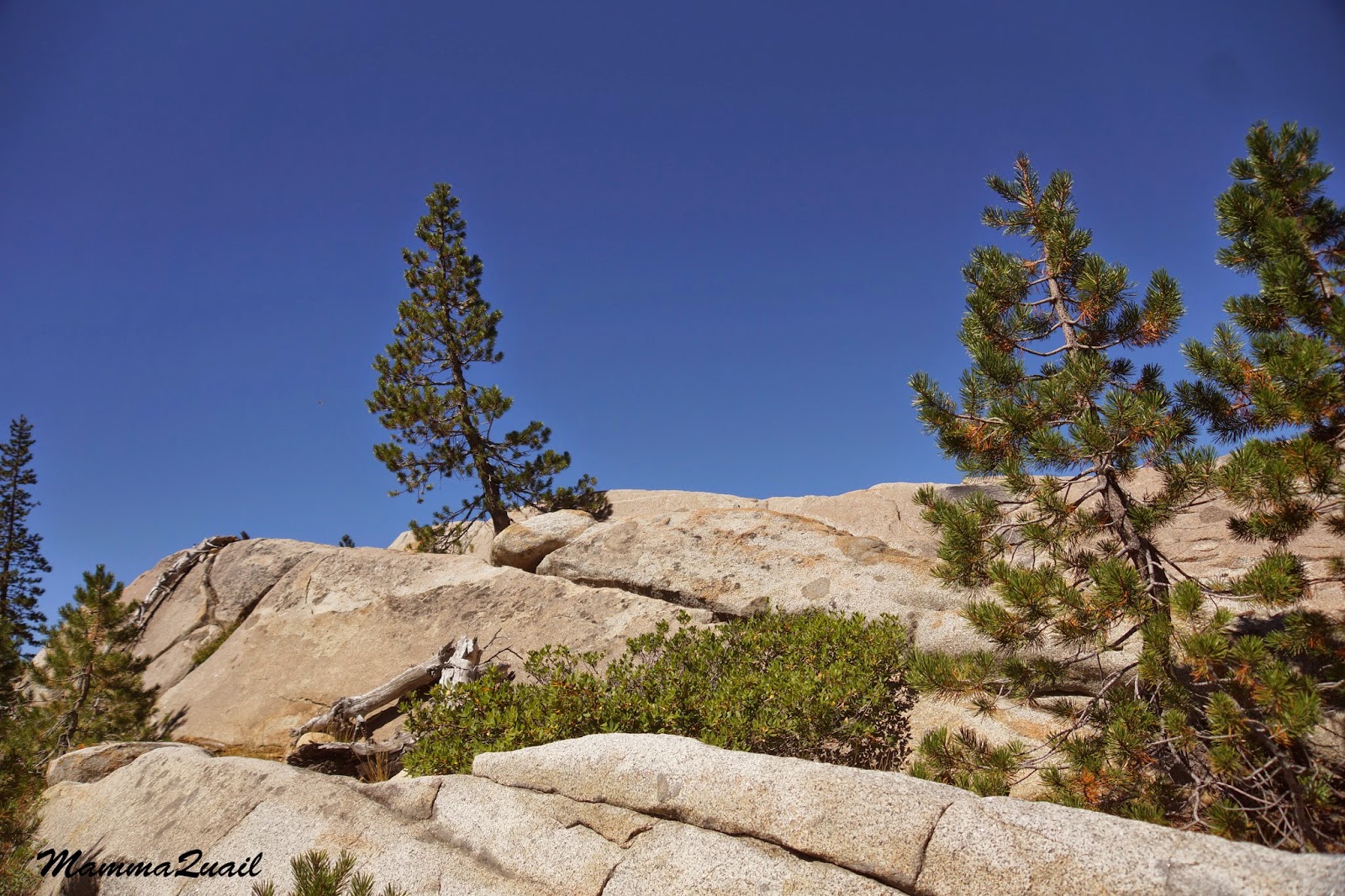 We were descending along the granite rocks and soon the lake disappeared from our view. We were now walking on a narrow trail inside a small, dry creek and our group stretched into a meandering human serpentine whose head couldn't see its tail and vice-versa.
At some point the trail became less obvious. The leading people (myself included) continued along the creek following a bootleg trail. The people behind followed what turned out to be the actual trail to the right and up the granite rocks again. 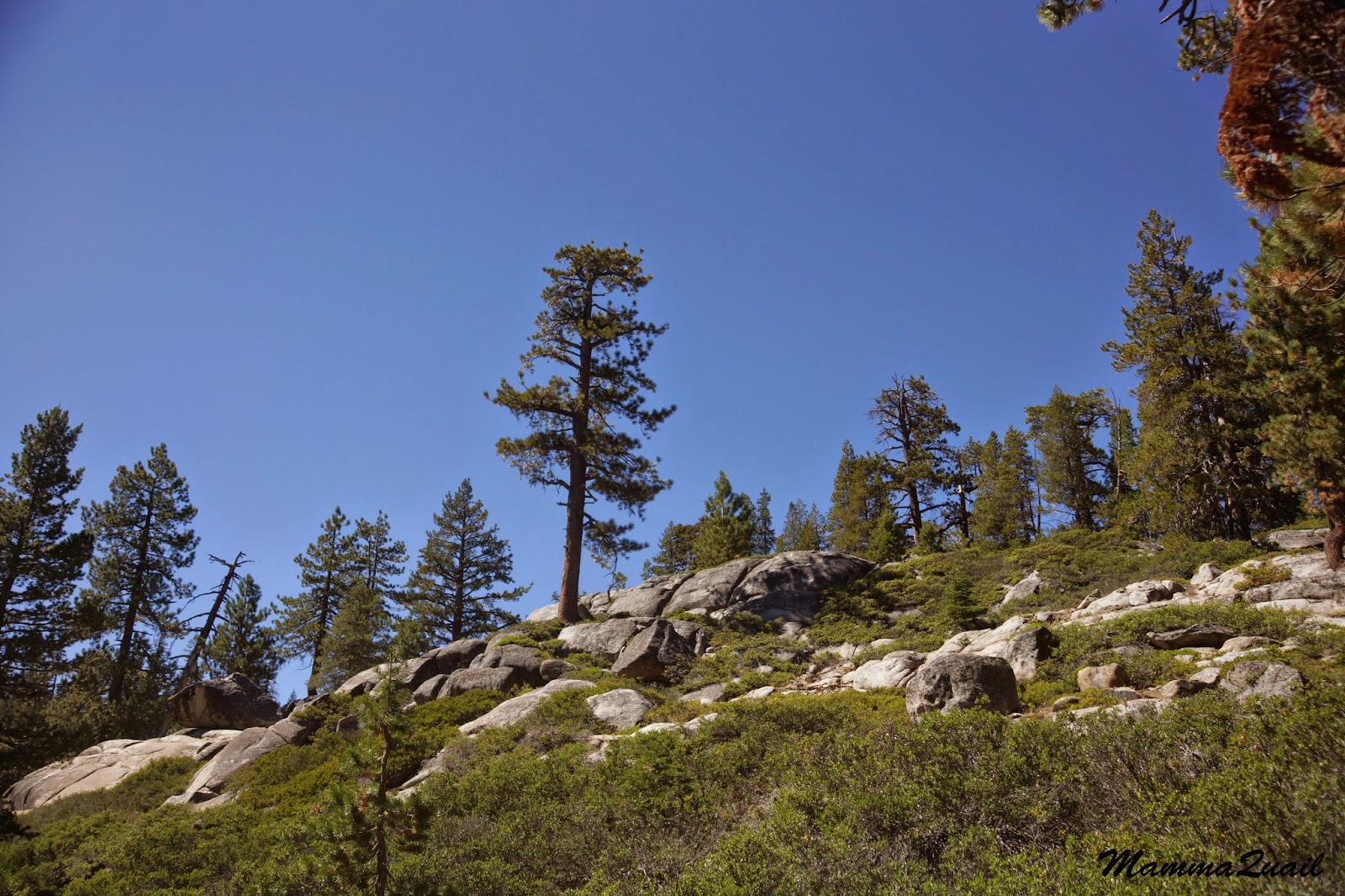 Then the bootleg trail disappeared and we found that we had no idea where the others were. At that point I was really, really thankful for the radio communicators. It would have taken us much longer to sort out the situation without them.
We were somewhere west of the dam when we reached Silver Creek.  There, too, were bootleg trails and we took some time figuring out the real one. 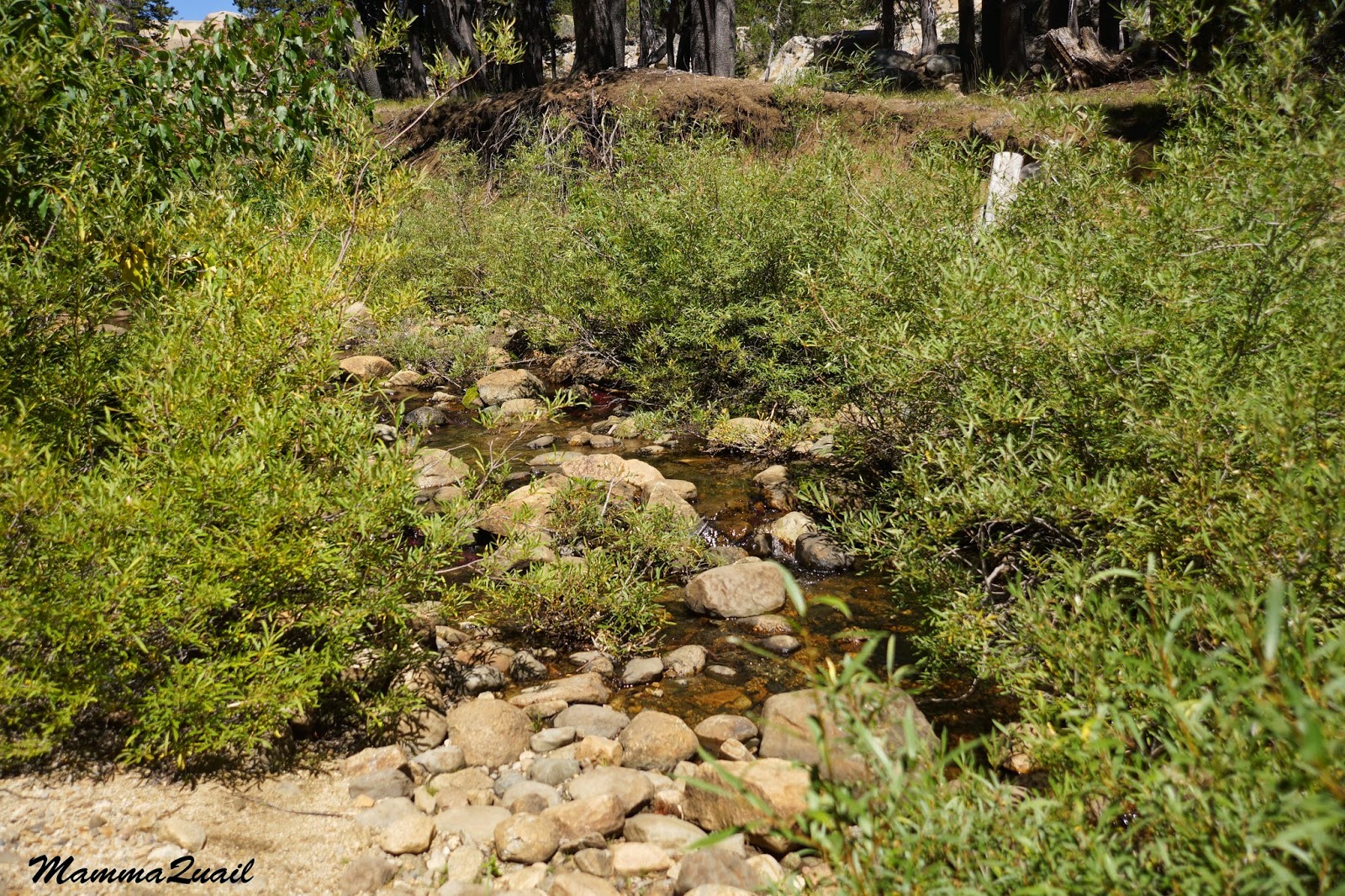 This little mountain creek was also a foot place to stop and enjoy the view. 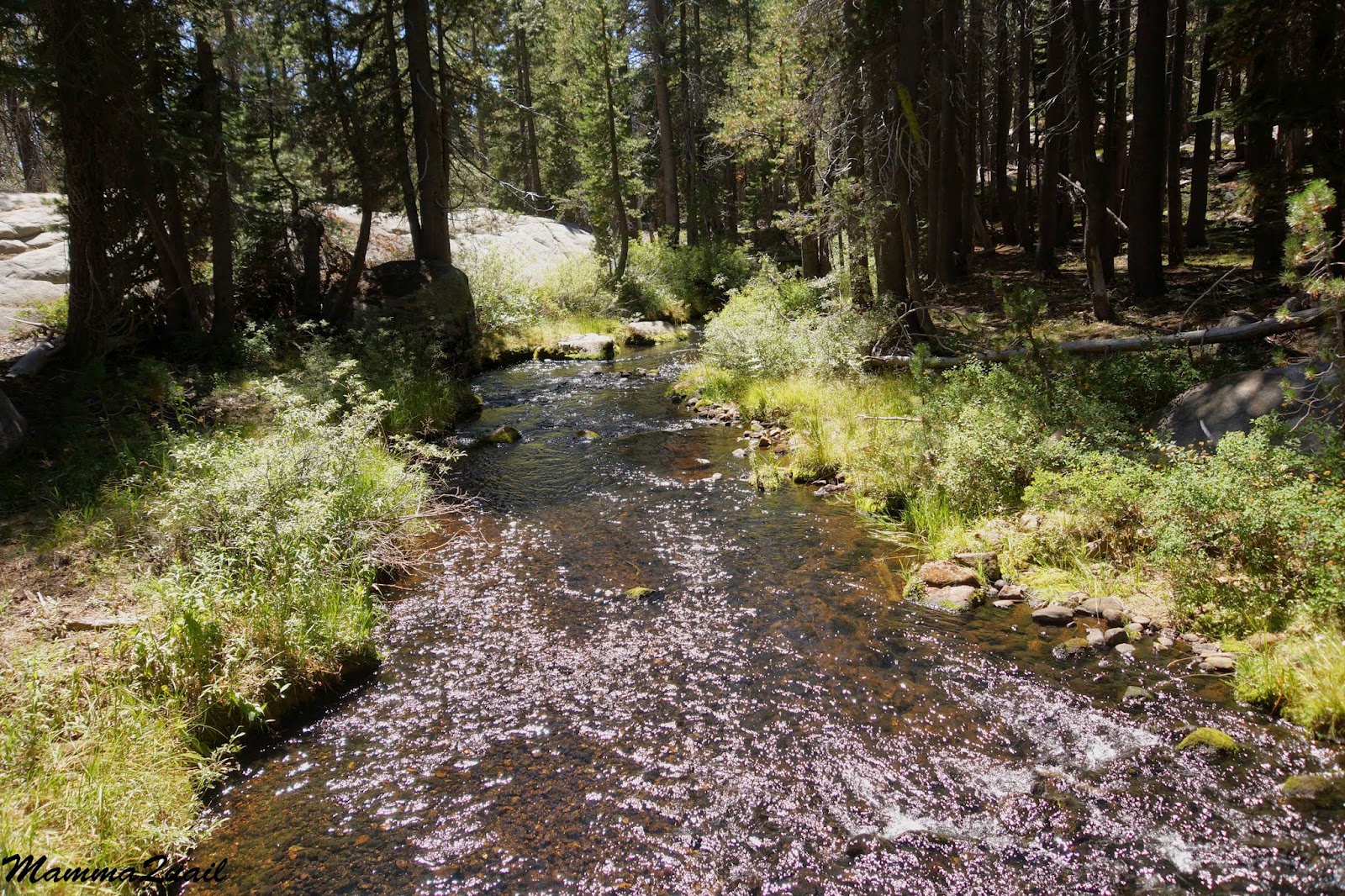 We stood on the narrow wooden bridge and while the adults appreciated the view ... 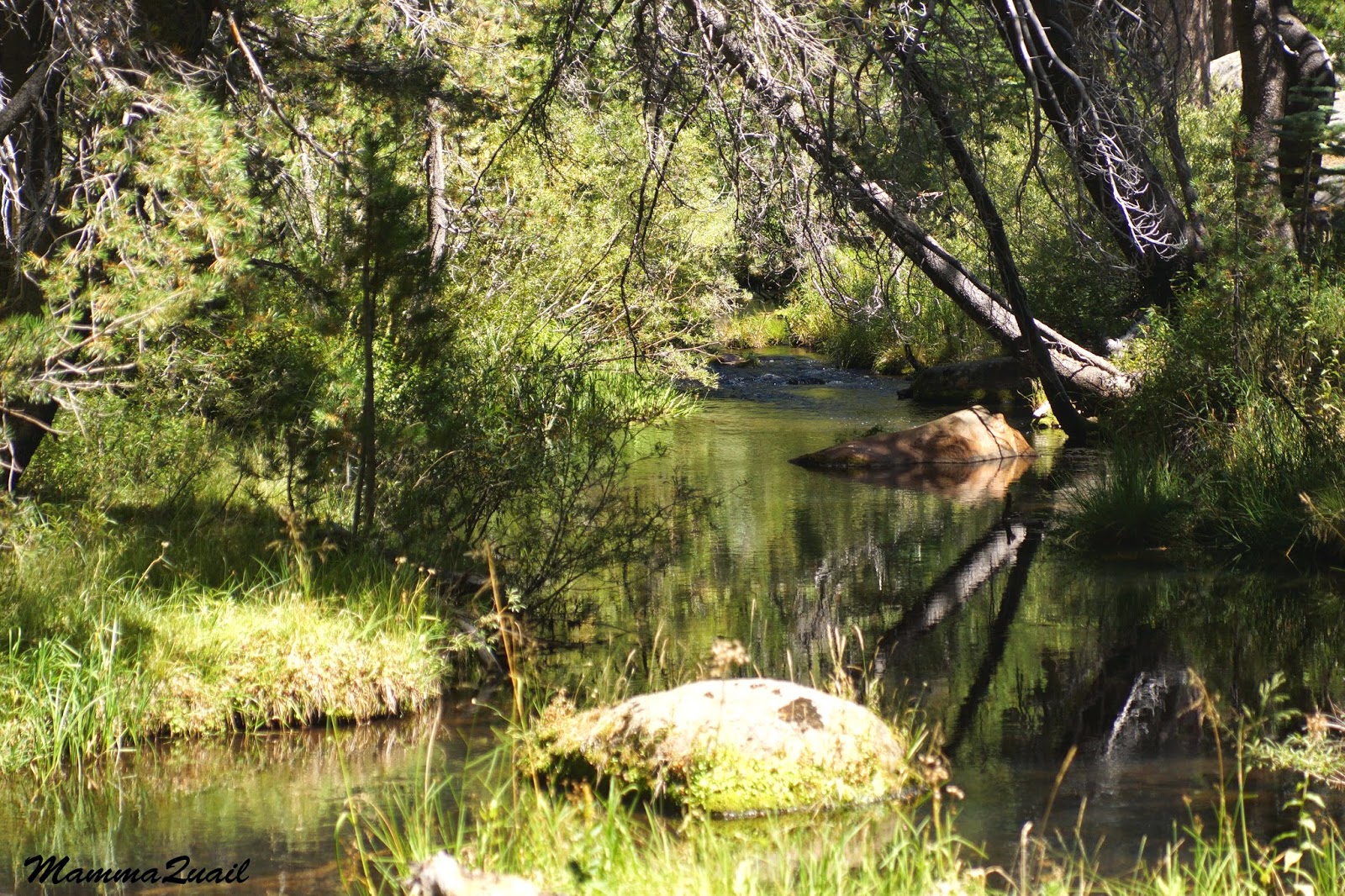 ...  the children were busy making shadow figures on the water. 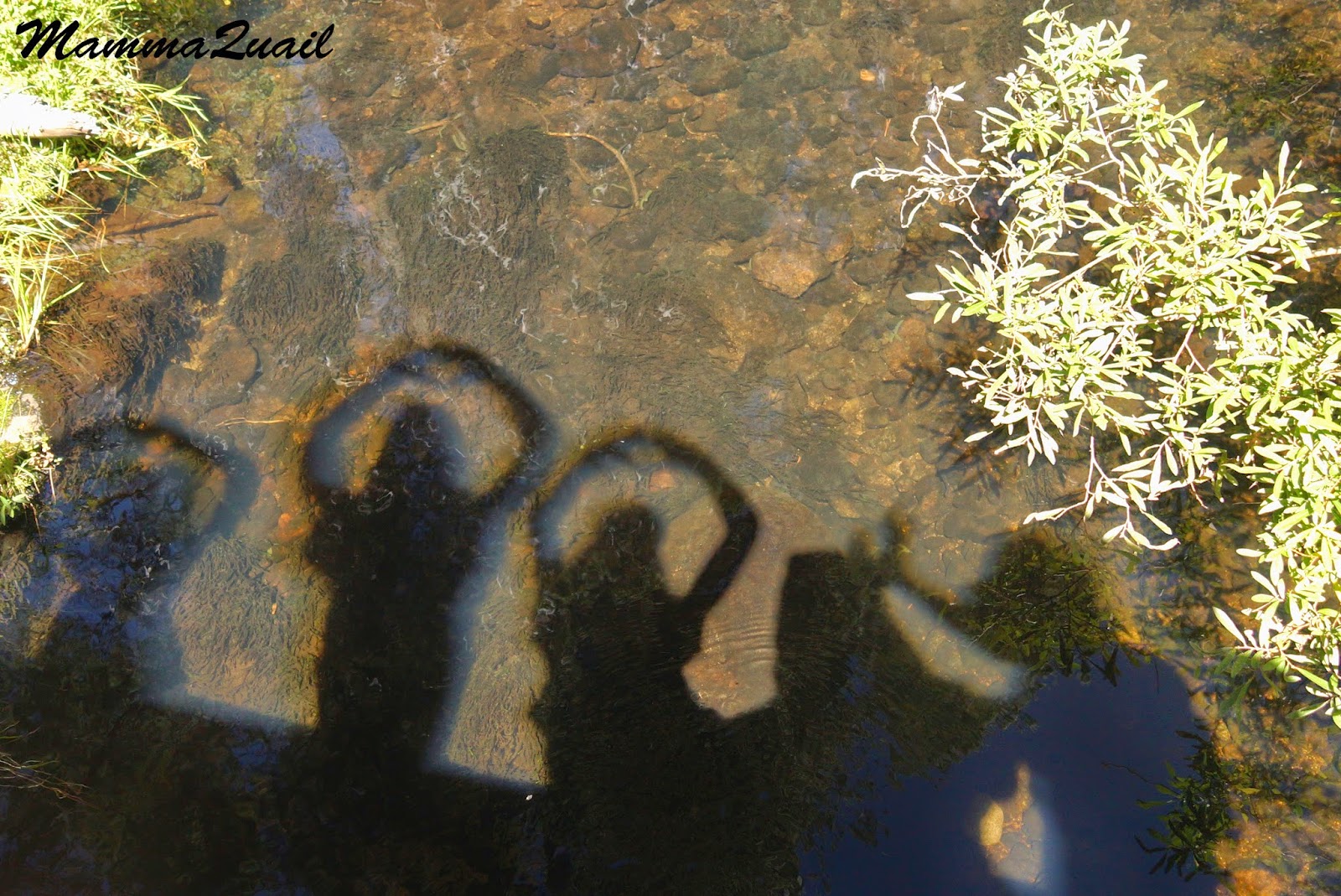 Our trail joined with a packed dirt road and we continued along that road into the woods. Along the way we came upon a lovely green meadow. 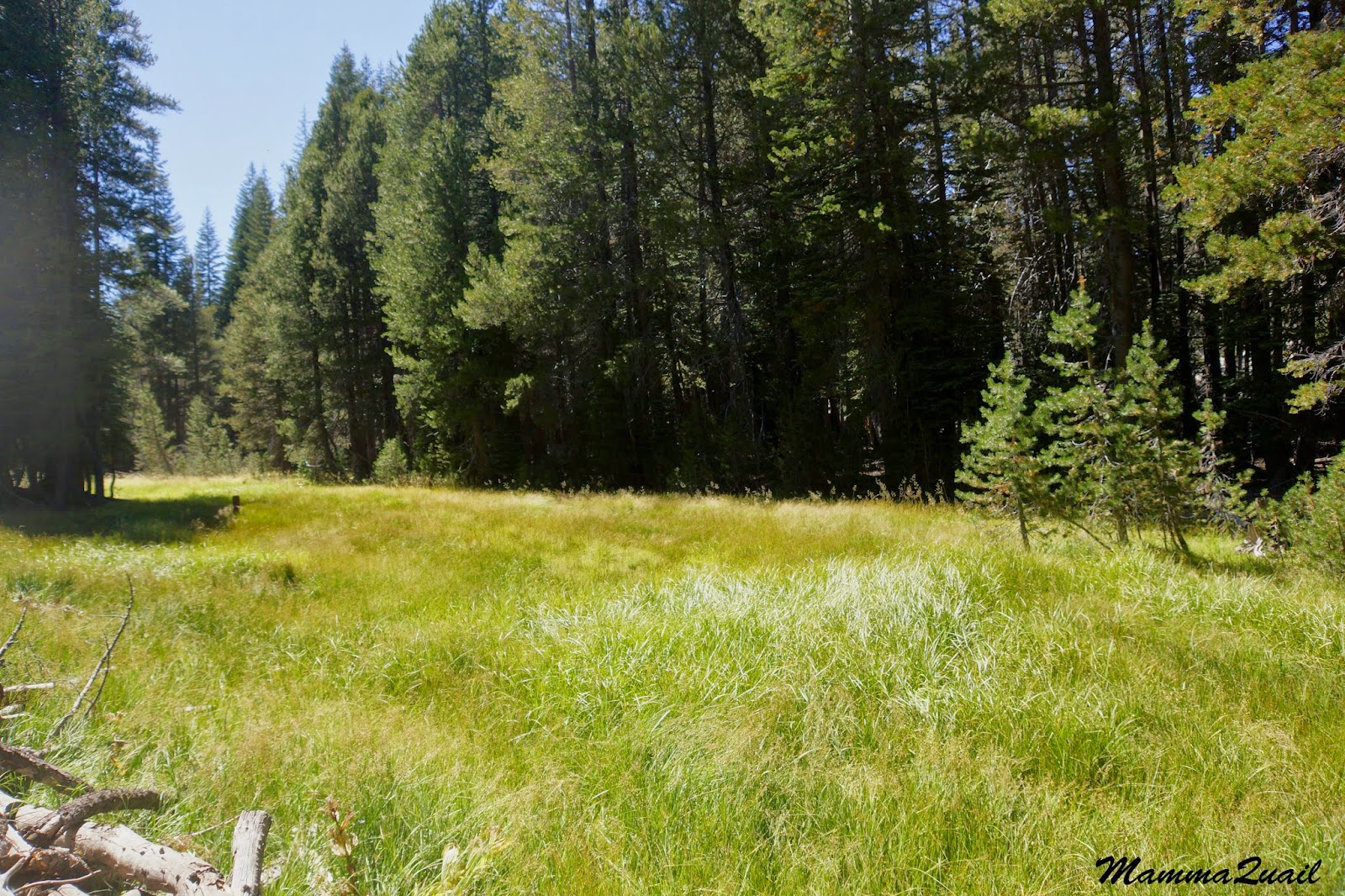 The meadow looked inviting but we were getting near the lake again and the youngsters reminded me of my promise of beach time. I took a quick photograph of a daisy I saw there and we moved on to the beach.
The beach, as expected, was jam-packed with people. We managed to find an unclaimed corner and within seconds the kids were stripped to their swimsuits and at the water. All except one of them who fell asleep on a flat granite rock.
I let my camera rest too. It was good to just sit there and stare at the water. Ducks swam too and fro, un-phased by the small canoes and kayaks that rowed by along the shore, or by the numerous children who splashed at the shallows. Very few people ventured into the ice-cold deep waters.
We stayed there at the northwestern beach for a long time indeed. Eventually it was the children who prompted us to move on: they were hungry and wanted something more substantial than the snacks we carried.
We plowed back to the road via the campground, not stopping until we reached the little gas station and store that serve the Lake Alpine resort area. We went inside and bought popsicles.

The children sat down near the store, licking their popsicles and looking exhausted. They wouldn't go any further.  So me and the other father took off to get the cars whale everyone else waited for us near the store. It was only us drivers that completed the entire loop and that was just fine by me. And I got to see an eared grebe fishing along the lakeshore on the way to the car :-)
We returned to our campsite at the Spicer Reservoir. My friend's husband who stayed behind because he was sick, had taken the time of our absence to break camp. That evening, after we all had dinner together, both families took off, leaving me and my chikas to complete our vacation by ourselves. Our plan for Labor Day was to visit the Calaveras Big Trees State Park on our way back home.