Out of the Way: Camping at Spicer Reservoir

As happened so many times before, I decided where to go on Labor Day weekend when it was already too late to reserve anything. All the reservable campsites in the vicinity of Lake Apline have already been reserved and we had to put our faith in the first come first serve campgrounds in the area. And to add a level of complication, we were going camping with two other families, meaning we needed three available spaces, preferably close to each other.
On the way up Hwy 4 we stopped at the National Forest office in Hathaway Pines and the ranger in attendance directed us to the Spicer Meadow Campground, about 10 miles off Hwy 4 on the way to Lake Alpine, near Spicer Reservoir.
We arrived there early in the afternoon and we were very lucky indeed - not only was there space available, but we have found a double site where all of us could legally and physically fit. This was possible because at the last minute before leaving home Papa Quail decided to stay behind and catch up on his work.
As soon as we unloaded - the children found the trail to the water and vanished from our sight. I reassured myself that my chikas were in the company of responsible teenagers and that they had a radio communicator with them, but as soon as I finished with the tent I too hurried down the trail.
Like all other reservoirs I've seen in the past two years, this too had a low water level.  The water was cold, but not to cold to swim. Not for me, anyway. I got in the water with a couple of brave teenagers. My chikas were satisfied with staying at waist level.
I was glad I brought my camera along. After I got out of the water I photographed the osprey that was circling overhead.
After we finished building our camp and had something to eat we decided to go for a little walk along the water. After some discussion the two fathers have decided to remain behind and prepare dinner, so me and the other mama took all the younglings, including all the complaining ones, and headed down the road.
Not having a proper map of the area and not seeing any obvious trailhead we simply got out of the campground and hiked along the asphalt road, following the contours of the shoreline from above. As late as it was in the season, there were still plenty of flowers abloom.
I was particularly attracted to the small lupine shrubs that decorated the roadside, and took many photos of them.
Only while processing the photos at home I noticed that bumblebee that got itself into the focal plane and stuck its tongue out to the camera :-) 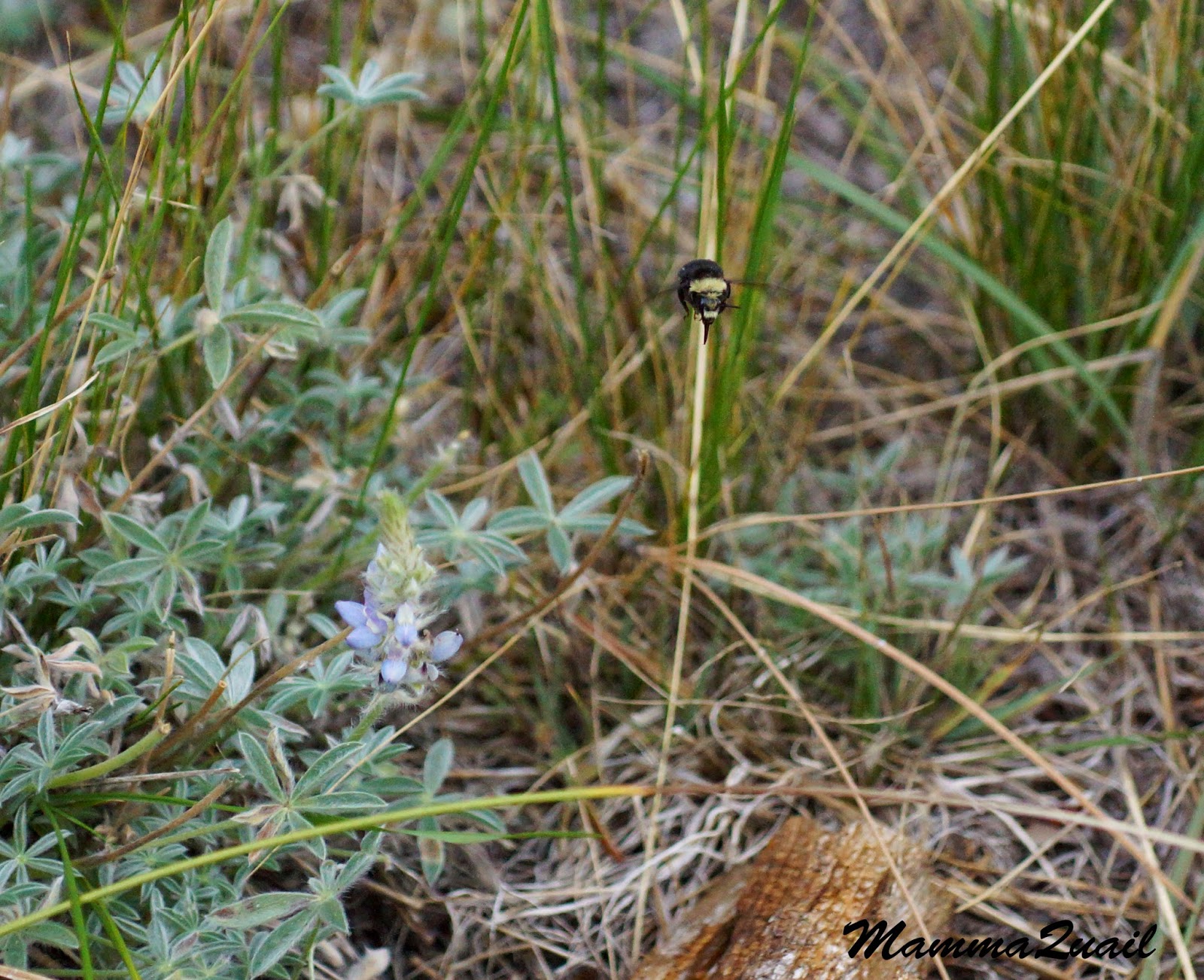 We couldn't hike too far because the hour was getting late and there was dinner to consider. Past the group campgrounds, just before the road curve going down to the dam, we found a nice rock ledge with a spectacular overview of the reservoir. It was a good spot to stop. 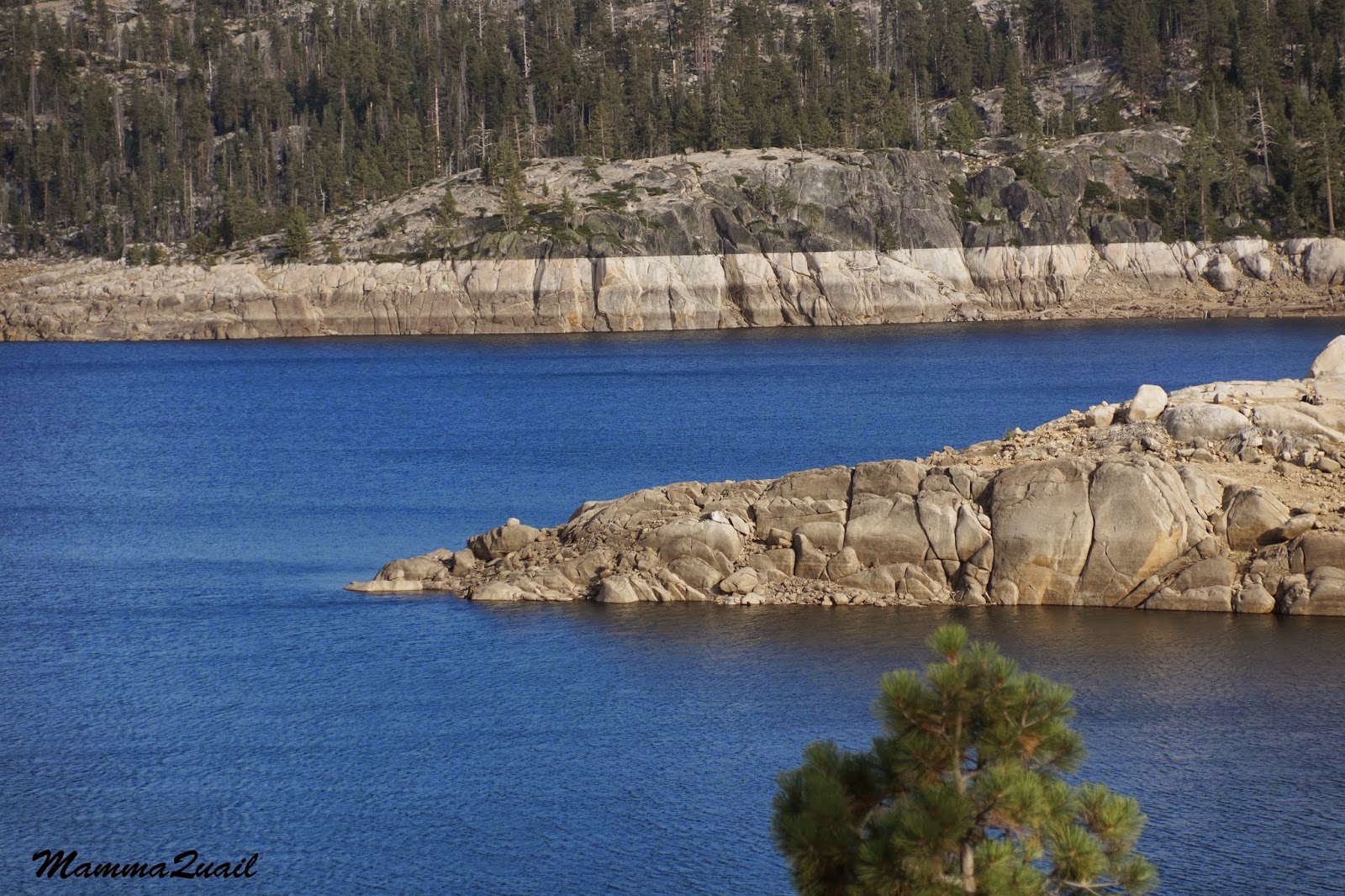 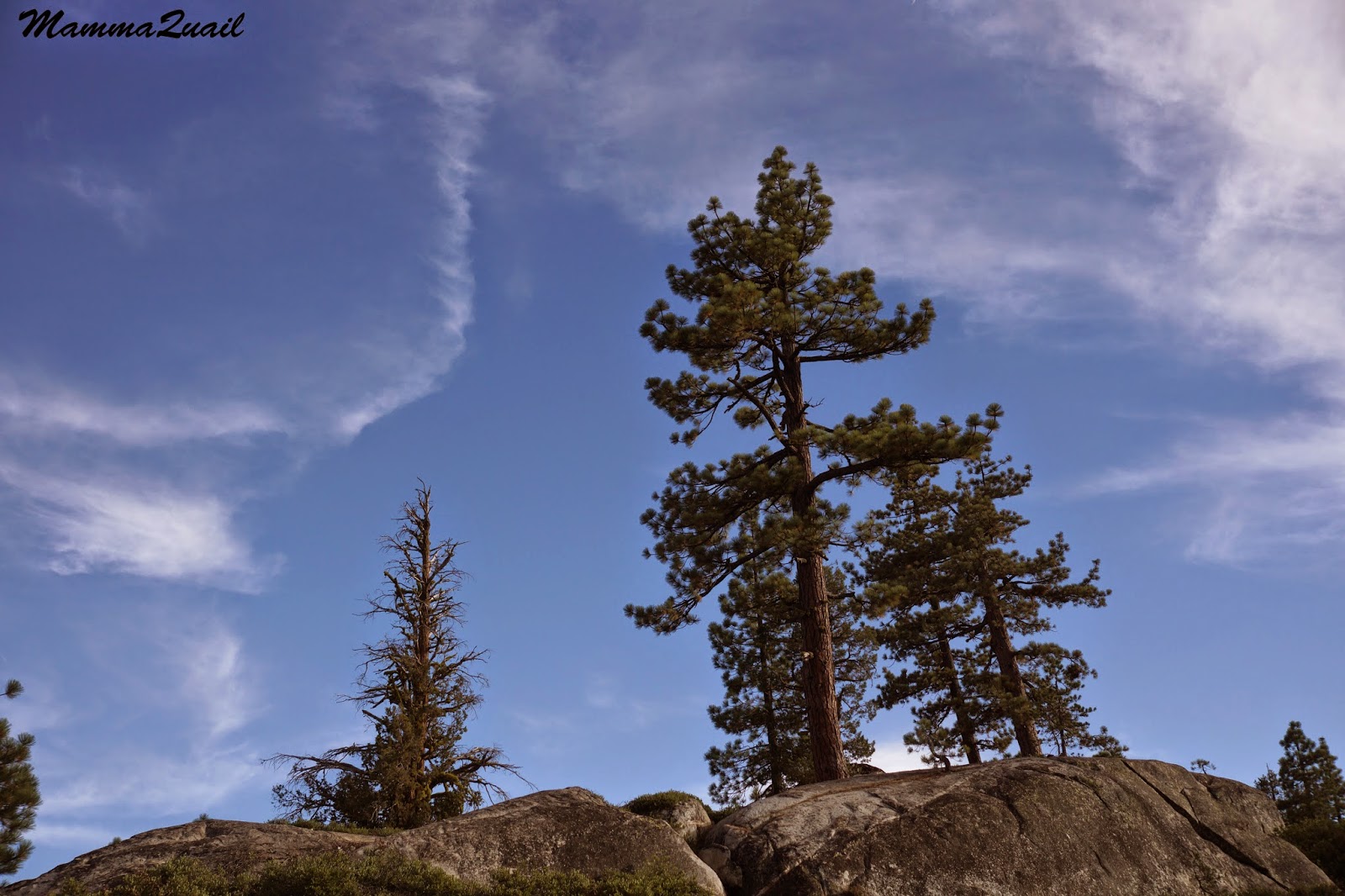 The view to the other side was no less impressive. I wished I could have stayed there until nightfall to watch the sunset. 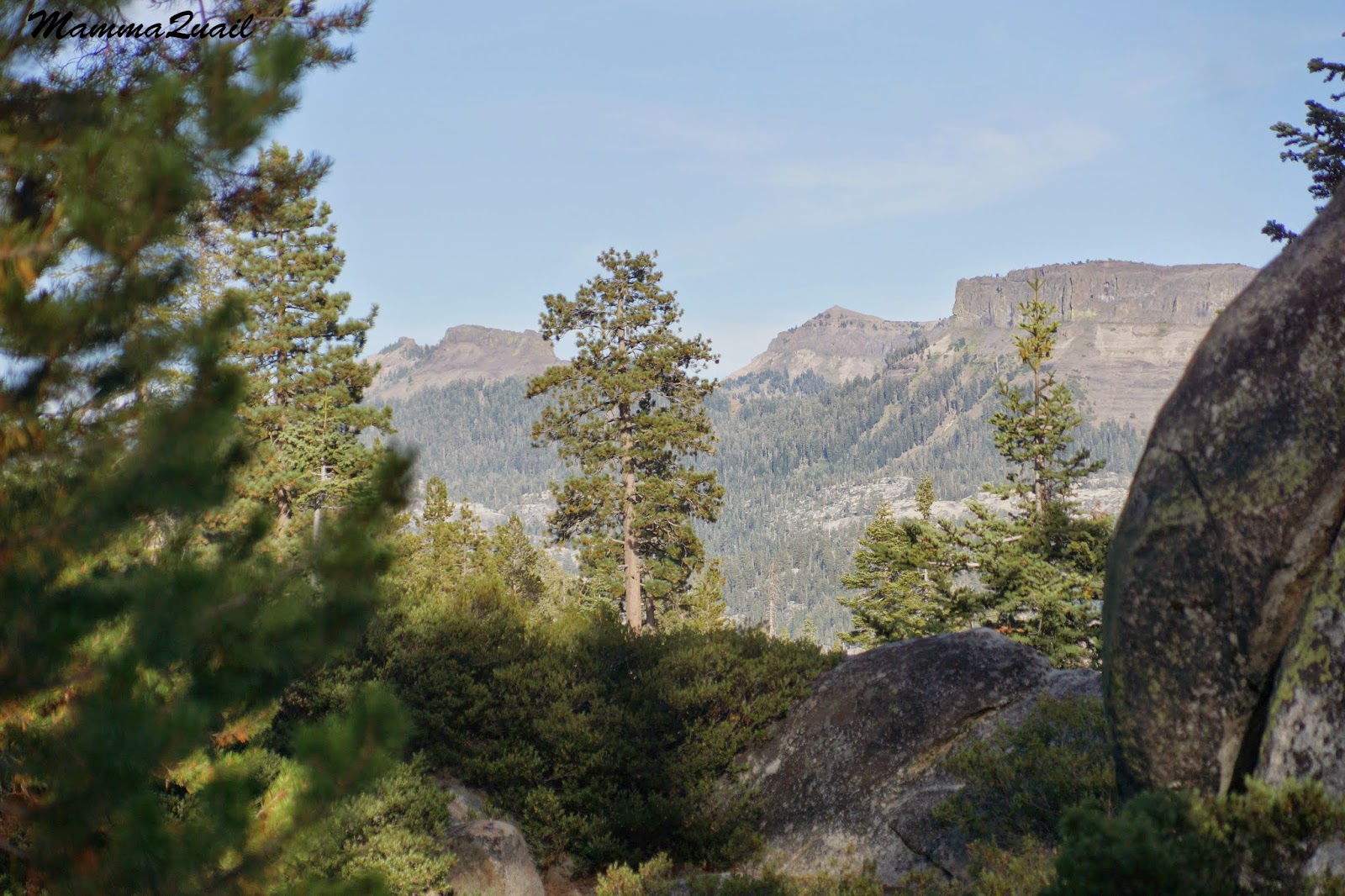 The children, however, had other ideas. Without even asking, the teens hopped over the ledge and descended all the way down (a long way down) to the waterfront. My chikas gave me pleading looks. I shrugged and allowed them to go down with the others. Thankfully, they had their radio communicator with them so we could call them back up when it was getting dark.

By the time we arrived back at the campsite it was already dark. The men were BBQing but nothing else was ready, so me and my friend went to work to complete the dinner menu while the children got themselves busy with the campfire or playing annoying games with the radio communicators.
Suddenly there was a great excitement at the table and high-pitched screams pierced the evening's tranquility. My elder chika, who was playing with the dog quickly came a-running and just as quickly came to fetch me. When I saw what the excitement was all about I immediately run to my car to get my camera.
I managed to get a decent photograph just before it took off into the night: it was an enormous insect, as big as an old-world cockroach. It wasn't a cockroach, though. I didn't know what it was at the time but it did look harmless enough. Later I found out that this giant water bug, as it is called, is indeed harmless as long as it's not messed with. I one tries to pick it up, however, it can have a nasty bite. Thankfully, no one in our group had any desire to handle this bug and we separated in peace.
Spicer Meadows is a very nice campground. There's potable water there, the campsites are well separated, allowing for reasonable privacy, and there's plenty of downed wood laying about that can be legally gathered for the campfire. The camp host, a very pleasant man, advised us to dump all of our waste in the dumpsters before 8:00 pm. "After that," he had told us, "I lock it up so the bear wouldn't get into it."
I thought it was a general rule for all Sierra Nevada campground to have bear-proof dumpsters so I didm't give it any further thought.
After dinner our group split into the tents. I had my chikas with me in our 4-person tent. The other two families, however, had a more interesting arrangement: one tent had my friend and her husband. Another tent had the second father with his teen son. And a third tent hosted my friend's teen twins with their 10yo sister, and their friend: the other family's teen girl.
I did instruct them not to have any food inside the tent. In fact, I drilled into them all the bear-safety camping rules. But as always, the best teacher is first hand experience.
About an hour after retiring into the tents the teen tent was alive with screams. Turns out, a bear came nuzzling by.
The bear fled quickly and I don't blame it. I would have run away too if four teens would have screamed at me.
Later that night one of the fathers saw that bear (or another one) near the dumpster on his way to the restrooms.
It took a long while before the excitement subsided and all voices quelled.

The aftermath of that exciting night was that in the morning everyone was dead-tired. Almost everyone: my chikas, as it turned out, had slept through it all.During breakfast it became evident that my friend's husband came down with fever. He sat by the campfire shivering miserably. We had planned to go hiking that day but he wasn't going anywhere that morning.
After some discussion between my friends we decided that we will go hiking after all, but that he would stay behind and take down the tents: they would be leaving than evening.
Everyone else got in the cars and we drove to Lake Alpine, where we had a beautiful hike around the lake. When we returned, the third family had decided to leave as well. After a nice dinner together, everyone but me and my chikas got in the cars again, said goodbye and drove off into the night. With a sigh I had my chikas ready for bed, tucked them in their sleeping bags and sat down to wash the dishes in the pail by the now lonely campfire.
It was very quiet that night. 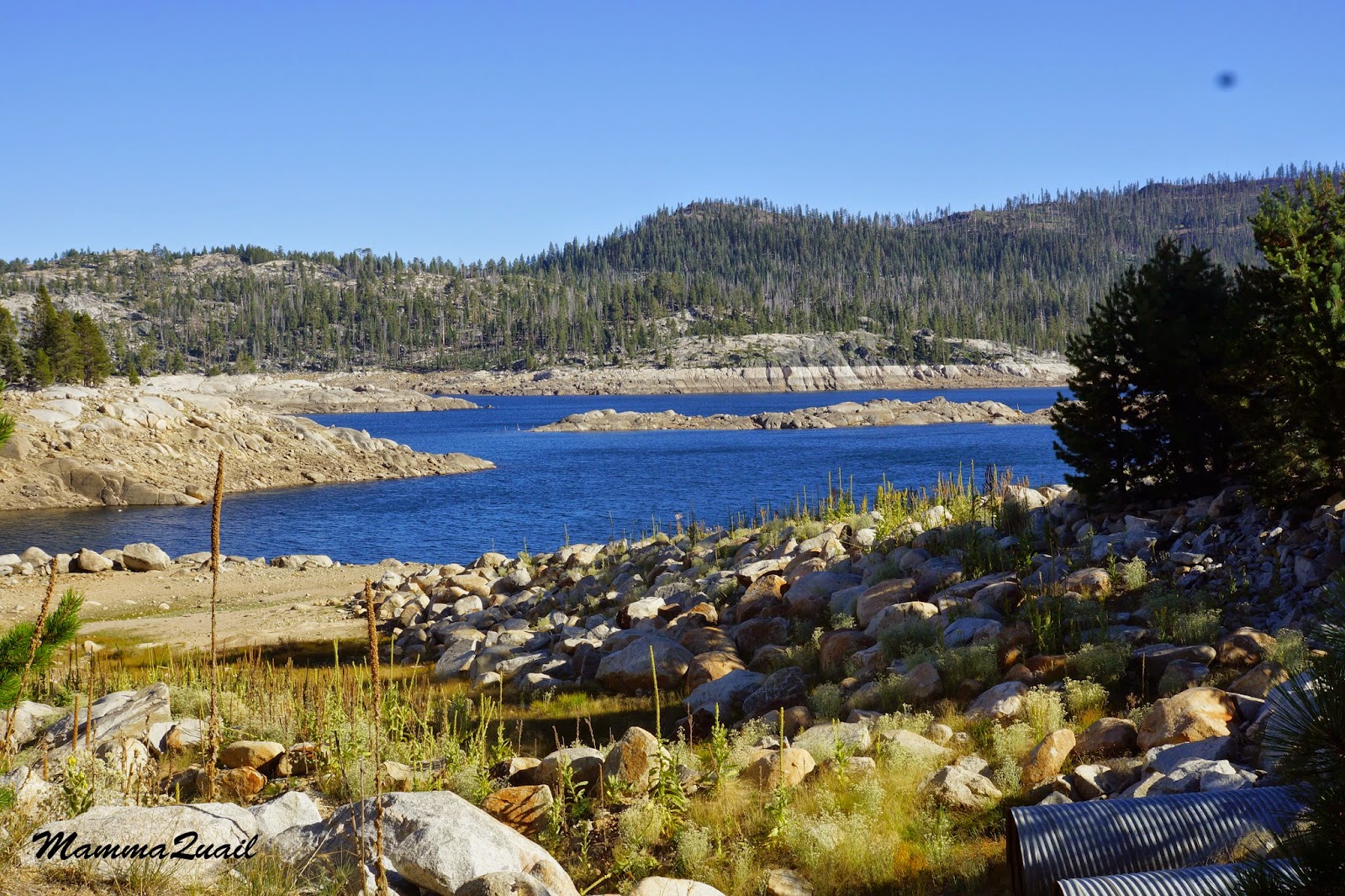