Platforms on the Soles of My Shoes: A Sticky, Muddy Hike in Garin Regional Park

Garin/Dry Creek/Pioneer Regional Park is a regular hound for me. Close enough to my home to frequent, isolated enough from the city to escape it, and pleasantly rich with natural diversity of plants, animals and, as was evident in my most recent whiles there: fungi. I love hiking in that park. Usually, when I go by myself, I hike up the hills where I have solitude. This fall I was planning to take my hiking groups there and I was checking out the loop trail that goes along Dry Creek, over the Jordan Pond Dam and up the west part of the High Ridge Loop Trail.
I started at the Dry Creek entrance and walked north on Meyers Ranch Trail along the creek which, following the recent rains was anything but dry.  I was welcomed by the lush, green hills, a green I haven't seen in a while with the long drought we had. Very soon, however, I realized that it wouldn't be a good idea to bring my group via this route. The trail, an easy one most times of year, was very, very muddy. Deep, thick, and highly slippery mud that slowed down my walk to crawling speed. A week later, when I brought my hiking group there, we started at the Garin park entrance and hiked a smaller, more manageable loop. The photos here are from both of these hikes.
The weather was perfect, though, and I enjoyed the freshness of post-rain air. It ha been a while since I saw the hills so intensely green. I look back at the photos from my last year's hike in Garin and I'm amazed at how dry it looked, at about the same time of year. 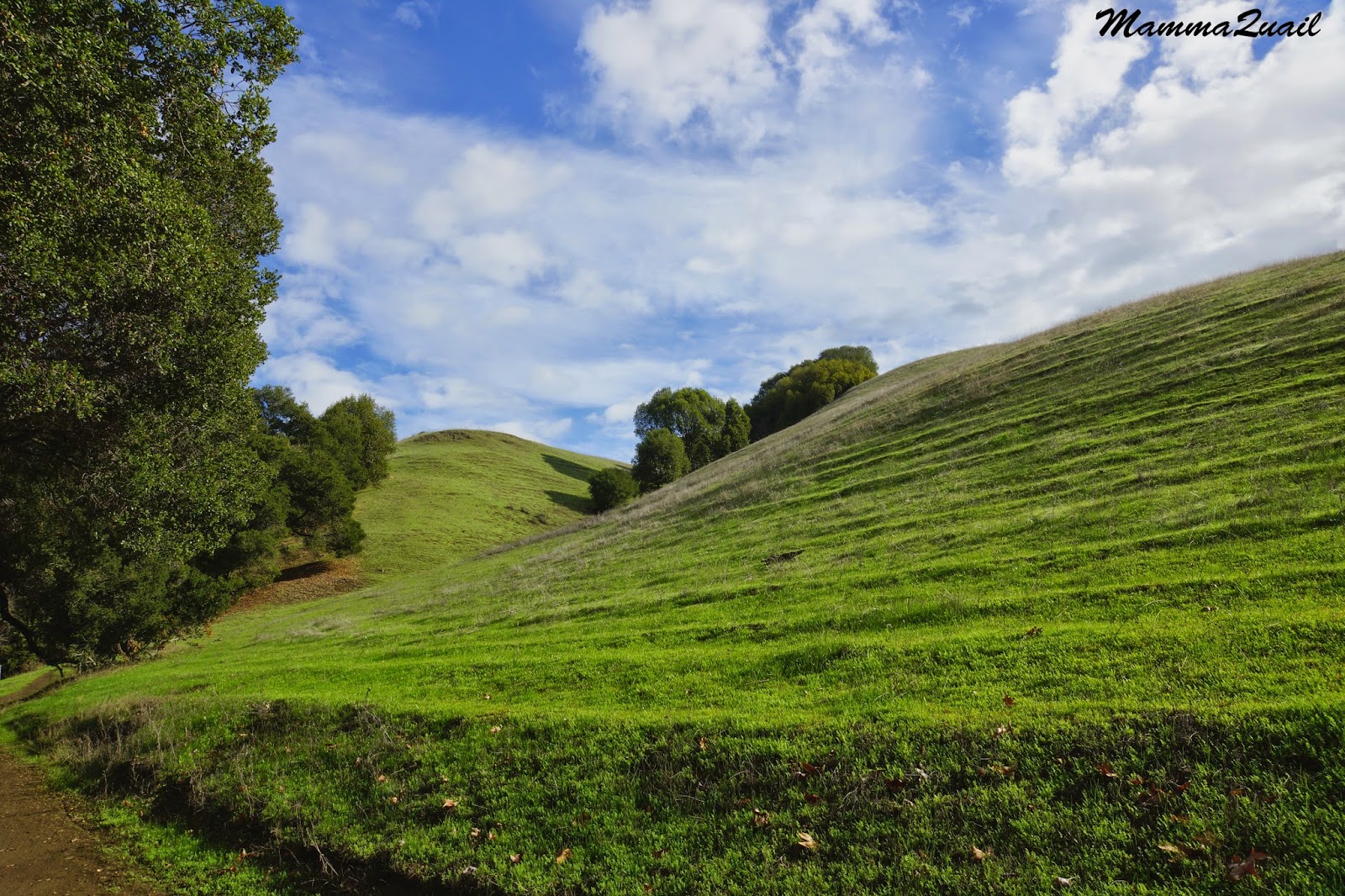 The hillsides glistened. It was droplet-covered cobwebs, spread between last year's dry weeds, that sparkling in the sunlight.
I was by no means alone: this loop is very popular among joggers and dog owners, and I met quite a few along my hike. The runners seemed to be struggling with the muddy terrain. The dogs thoroughly loved it.
Dry Creek was anything but dry. In fact, I cannot recall ever seeing it this high before. I was very pleased to see the energetic flow of this creek!
Narrow old wooden bridges span the creek at several points along the trail. Some of them are shaky and probably better rebuilt before collapsing under an unsuspecting hiker. I took this photo of the flowing grass on the steep creek bank from one of these bridges. 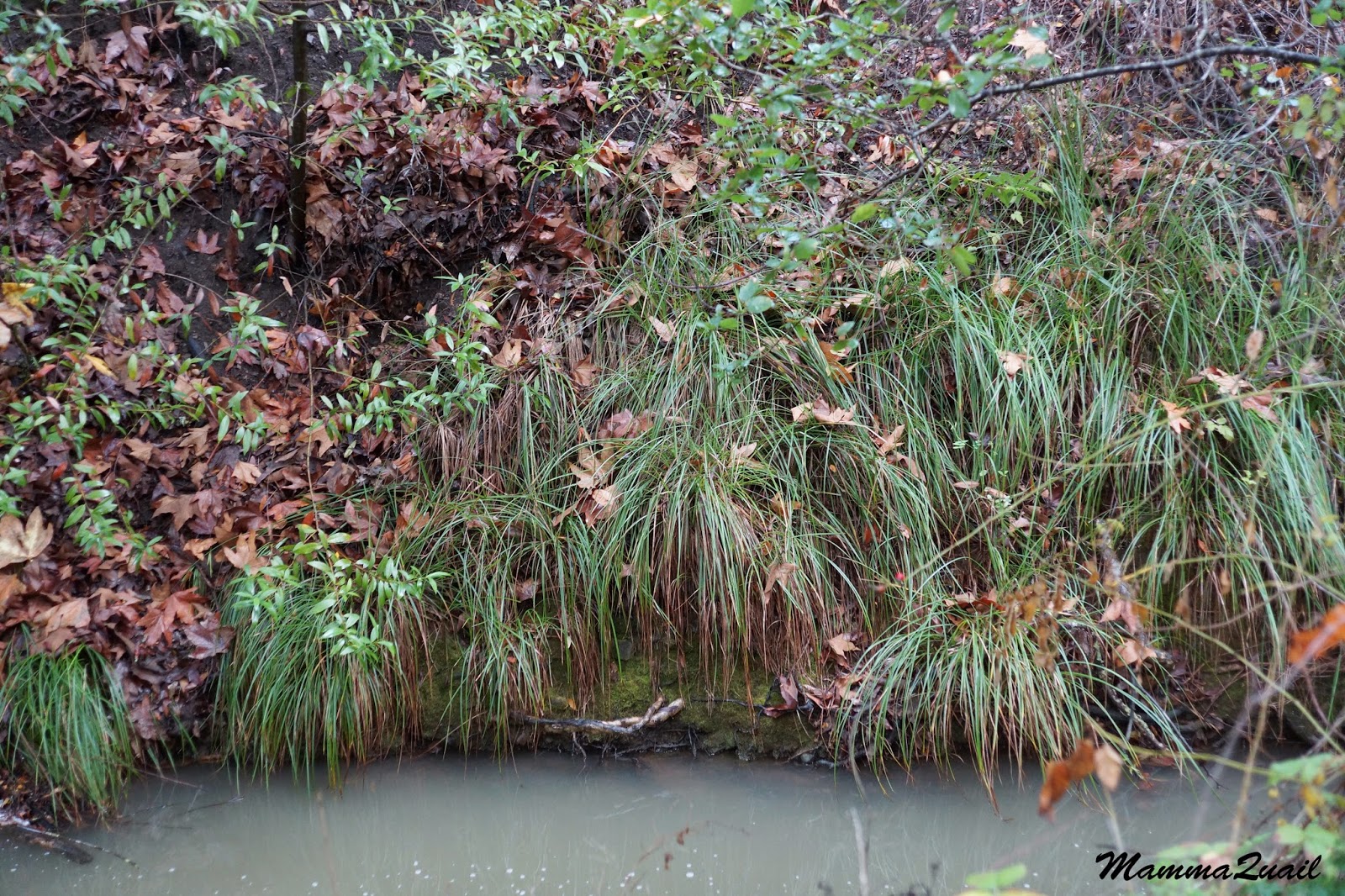 November rains brought forth a bounty of mushrooms I haven't seen in a long time. Although not matching the variety of fungi I've seen in Northern California during my Thanksgiving family vacation, Garin Regional Park sported a splendid display nonetheless. 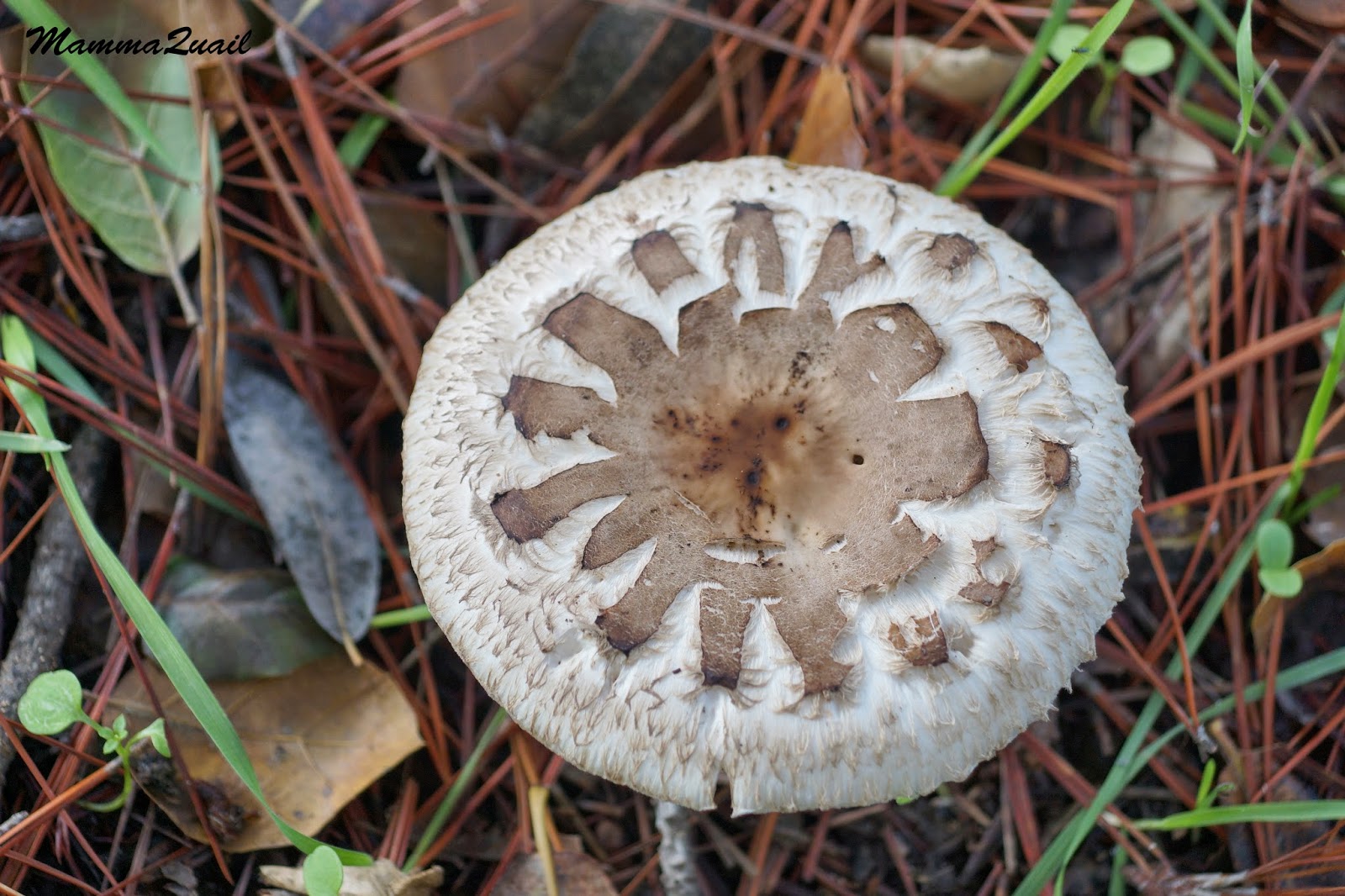 Not all of the fungi I've seen there were seasonal. Some are visible year-round. They too, however, look better after the rain.
Most of the fungi I saw in Garin were familiar to me from my trip up north. But I did see puffballs too, that were the first I've seen this season
I came upon Jordan Pond and sat down on one of the benches. Many coots were floating on the water, each in its own, unmarked, territorial circle of water surface. Whenever on bird would cross the unseen border of another,a spat would break out and the dominant coot would do its best to sink the other, until the poor trespasser would flee far enough and the victor would return to its spot to find it occupied by a third bird who took the opportunity.
From the pond I hiked uphill to join with the High Ridge Loop Trail. Higher up there was a nice view of the entire pond.
I caught a glimpse of color in the grass: an early (or a very, very late) California poppy, shining back at the sun.
All the way up there is bench facing west. There, below the hill, the entire South Bay is on display. A short trail takes you to the edge of the hill where, visibility allows, one can see the entire Bay Area.
The view east shows a fantastic contrast: rolling hills of wilderness where one can escape to from the city hubbub, where the spirit can expand to the horizon and beyond.
It took me so long to complete the loop that I was almost late for picking up my chikas from school. When I returned with my group, however, it was on the weekend and we were in no hurry to go anywhere.  We took the time to imbibe all these scenes of East Bay beauty.

Children's eyes are closer to the ground. They find all the interesting stuff :-)
It rained some more between my solo hike and the group hike. While it made walking even harder, the mushroom display was simply gorgeous! 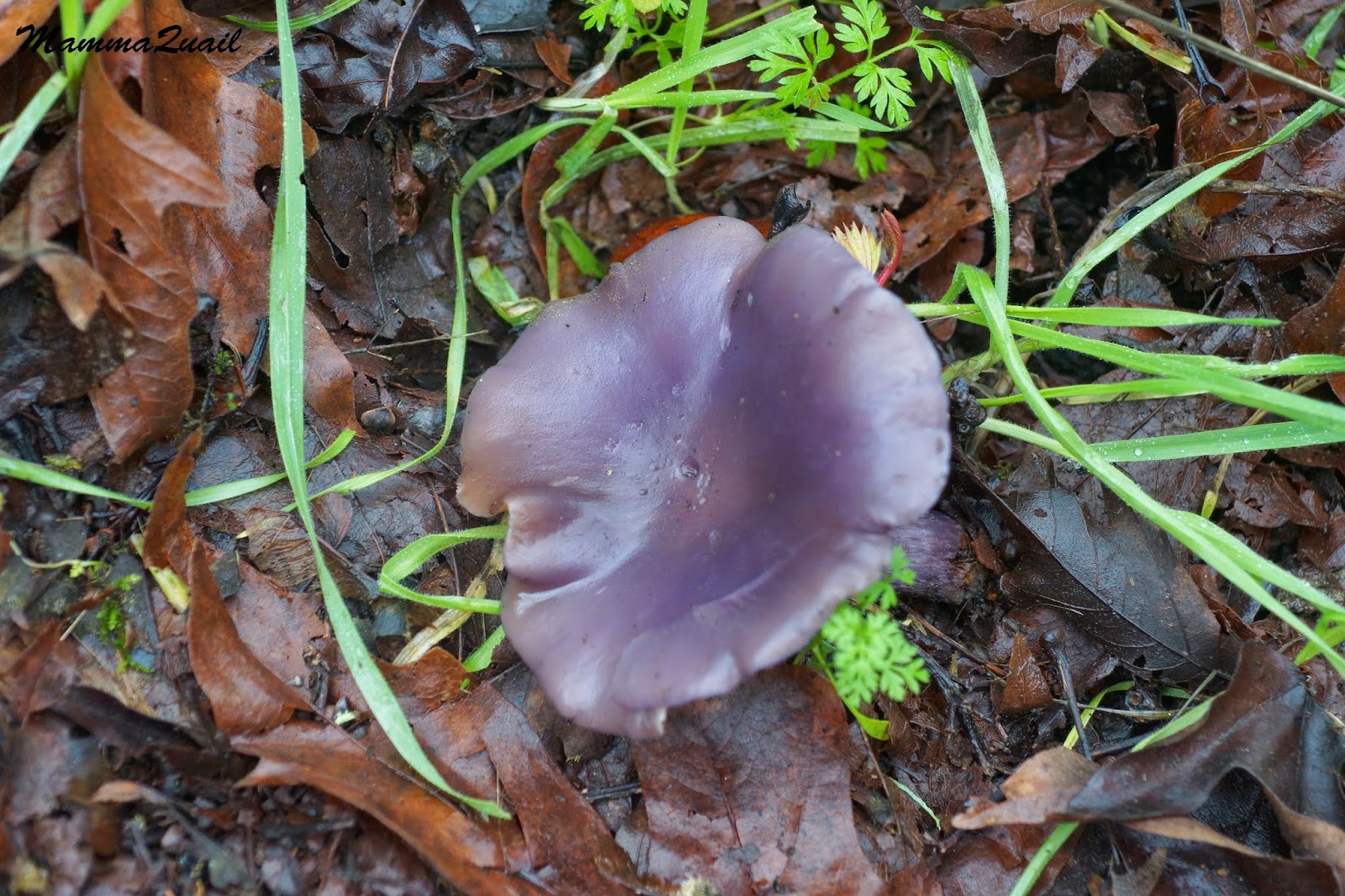 We had a lunch break by the big sycamore near the cattle gate that separates the north and the south portion of Dry Creek Trail.  The children found a newt wedged in a crack at the base of the tree trunk, peacefully waiting for the noisy humans to finish their business and go away.
I led the group on the narrow trail that connects Dry Creek and the High Hills Loop Trail. There were many more newts along that trail and the scattered hastily (as fast as newts go on land) up the hill.
A fallen log on the east side looked like it had grown feathers. On a closer look I saw it was covered with Turkey Tail fungus. 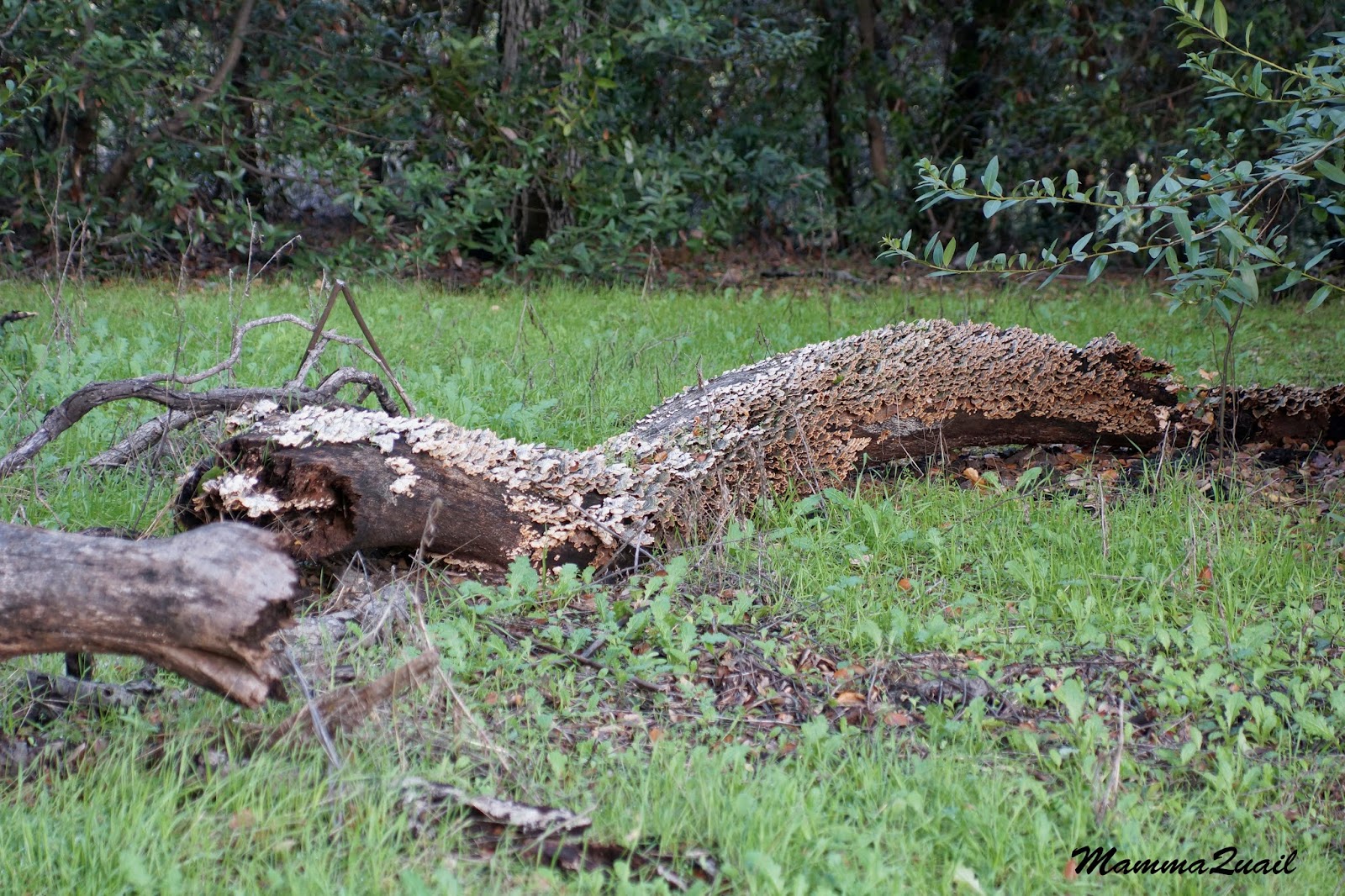 Fungi. Lots and lots of them that day. Even up on the hill, in the open grassland. 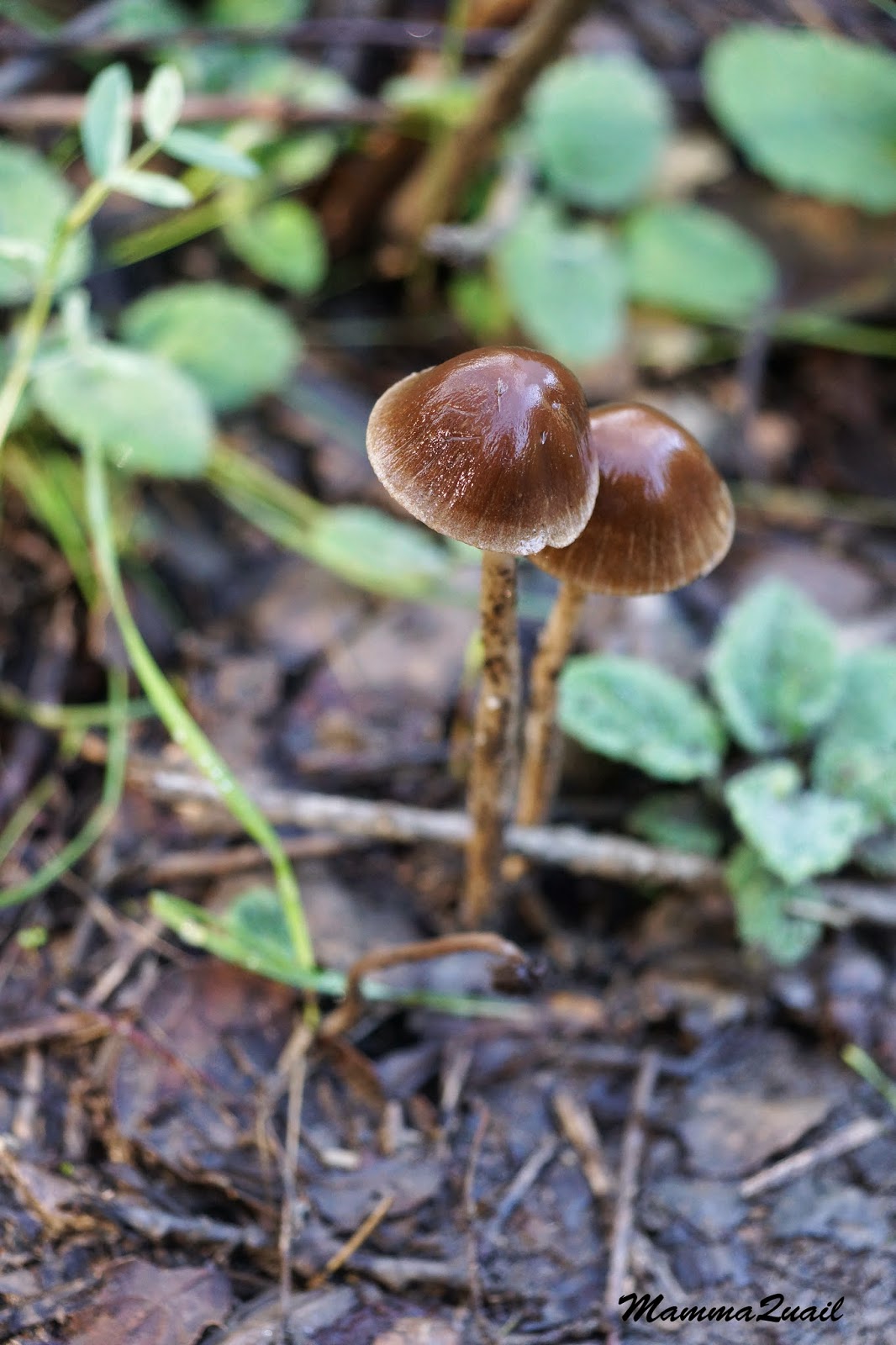 Fog covered the hills that day. The air was cool, refreshing, and promising of a long, wet winter. Sadly, December rains were the last. January has gone by without a drop and very little rain is in the forecast. The long California drought isn't over yet. 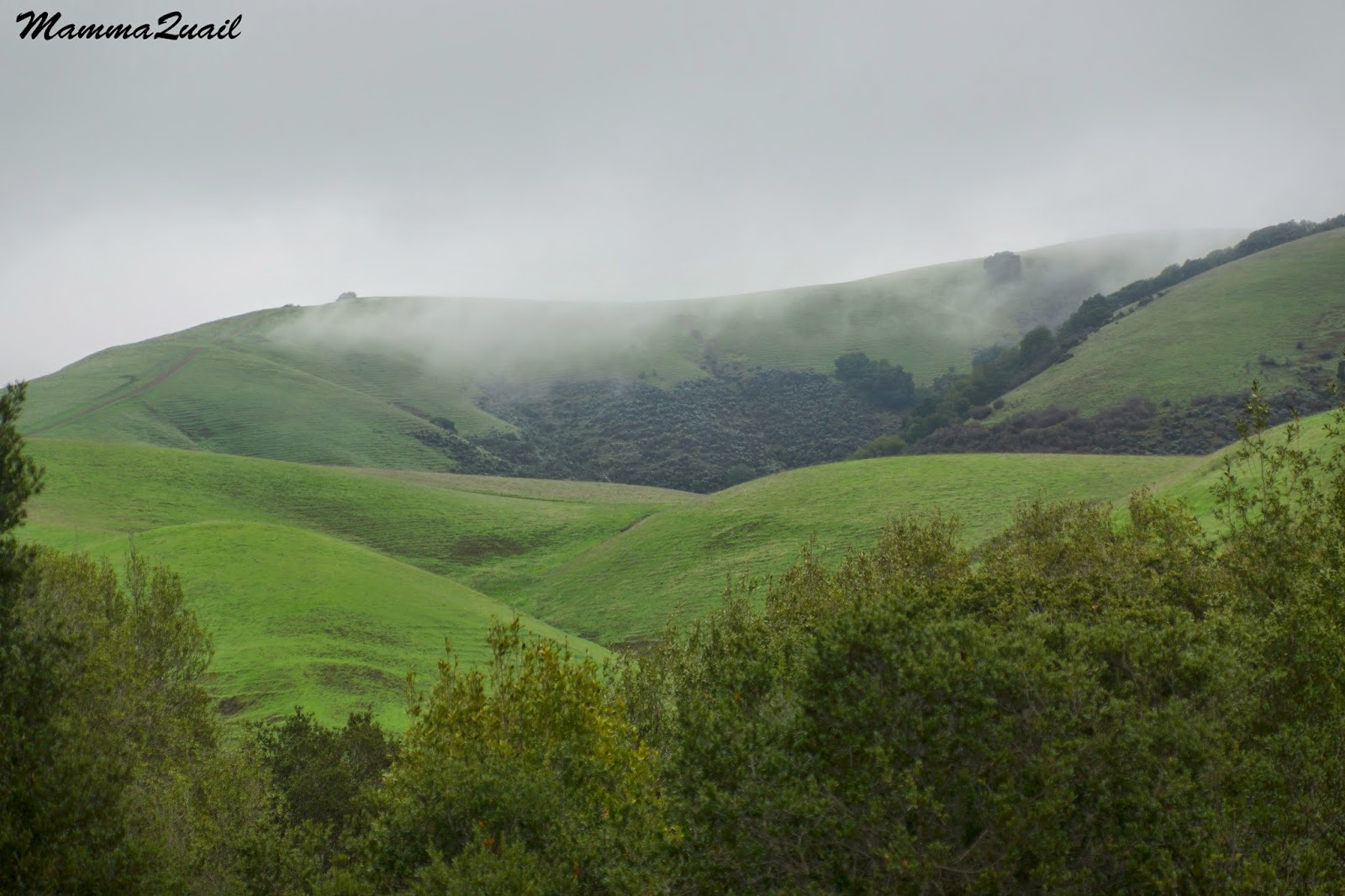 I'd like to finish this blog post with something I feel ambiguous about. At my solo hike I noticed some well-placed painted stone 'bugs' in tree crevices along the trail. At the group hike I saw some note of them, including one that was very conspicuous - on top of a wood post near the High Ridge overlook bench. They were very well done and looked very cute and pretty. However ... these things, cute as they are, don't really belong in Nature and didn't blend in, as well placed as they were. I have no idea who put them there or for what purpose. I didn't take any with my as I would a piece of trash I see on the trail, I just left them where I found them.

Garin/Dry Creek/Pioneer is a fantastic place to go hiking or even just to escape for a little while. For being really close to the city, this park is still amazingly wild. I love it there.


I'm not even sure they belong here in this blog post. I didn't make them part of the main post, but here they are, smiling at the bottom. Don't belong, but cannot be ignored. 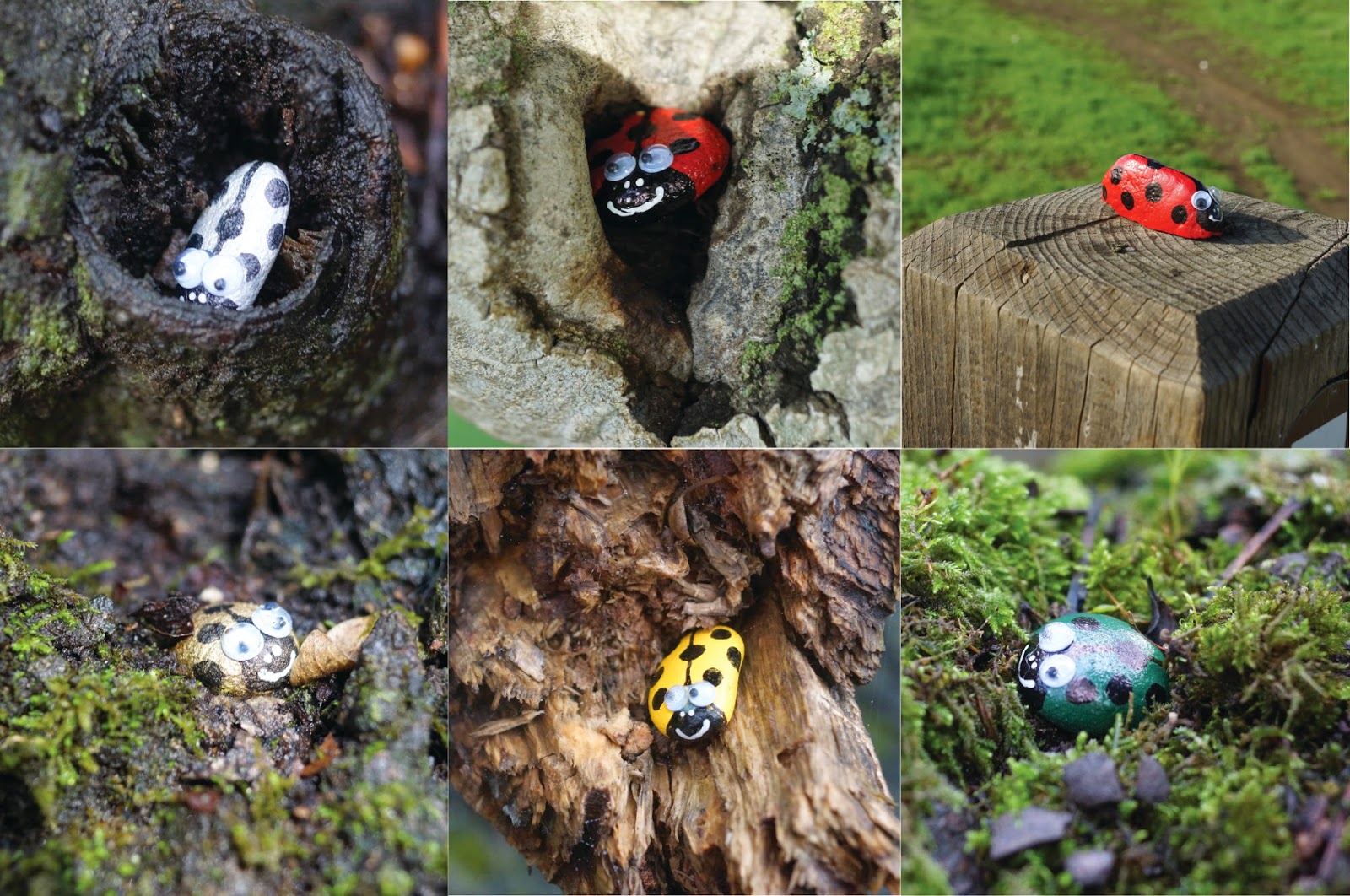