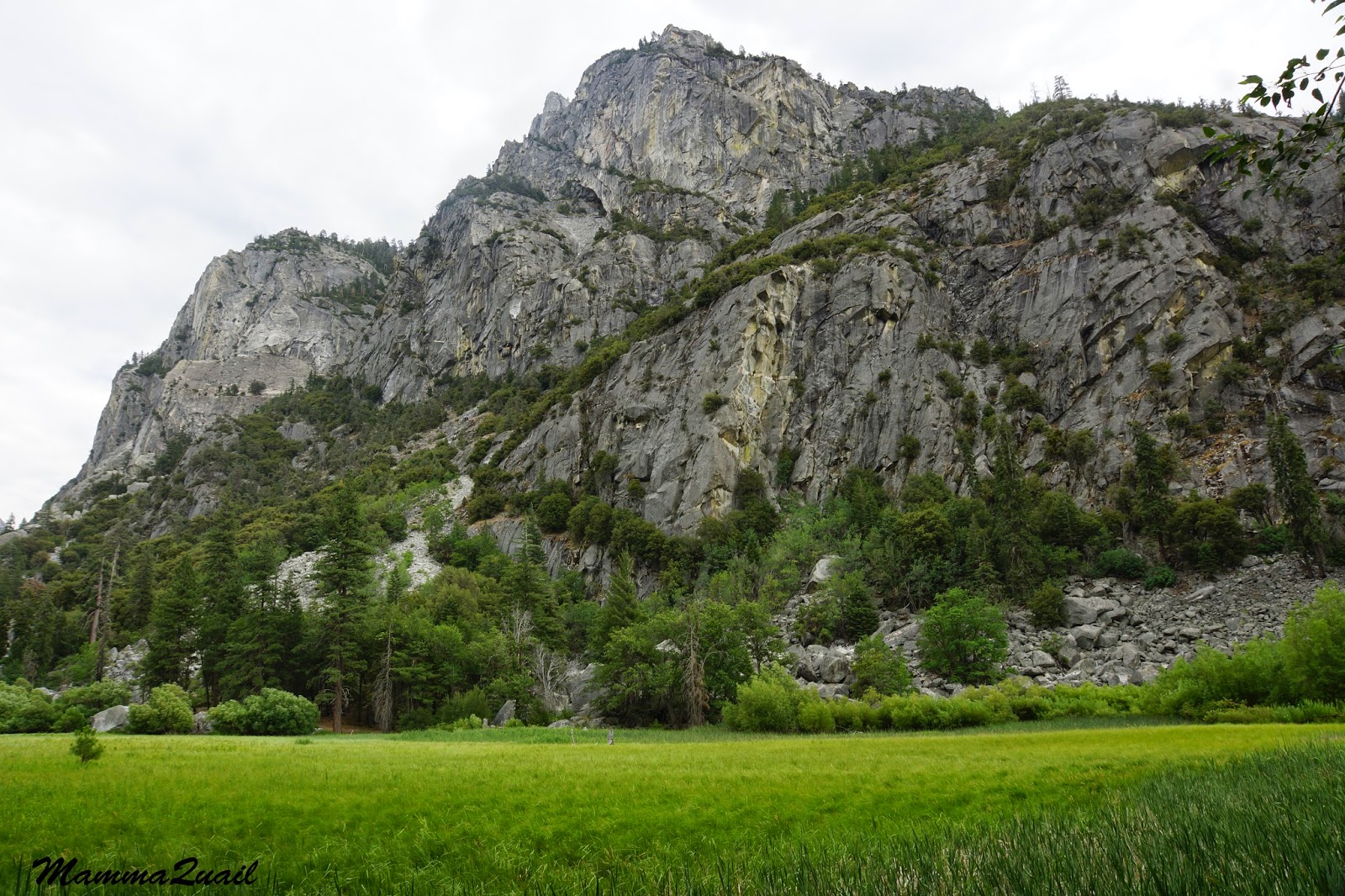 "But you promised me a bear."
And we didn't see any. Not in Lassen Volcanic NP nor anywhere else along the way. In that note we finished the Northern California road trip we took last July with my sister and her family who were visiting us.
Just for the record, I didn't actually promise her a bear sighting. I merely suggested that there is a chance that we might come across one ... nevertheless, she was disappointed about not having seen one.
So after only two days at home we took to the road once more, to the one place where bear sighting was almost guaranteed: to Kings Canyon National Park. Specifically, to Zumwalt Meadow.
It was to be a short trip of 3 days only (2 nights camping) and without Papa Quail who had to go back to work.
Leaving on time is always a challenge for my family, and this trip was no different. We therefore, arrived at the campground at 11:00 pm and had to pitch our tents to the meagre beams of flashlights and carry sleeping children from the car straight into the sleeping bags. At least it wasn't cold.

We took our time in the morning, and then there was the long and spectacular drive to Zumwalt Meadows.
It was already late when we arrived at the trailhead. There was some construction activity going on, some maintenance work on the very same trail we wanted to hike. It was still walkable, but there were many busy workers there and the machinery noise was loud. On top of that, the ranger we met there told us there was no bear sighting reported that entire day. 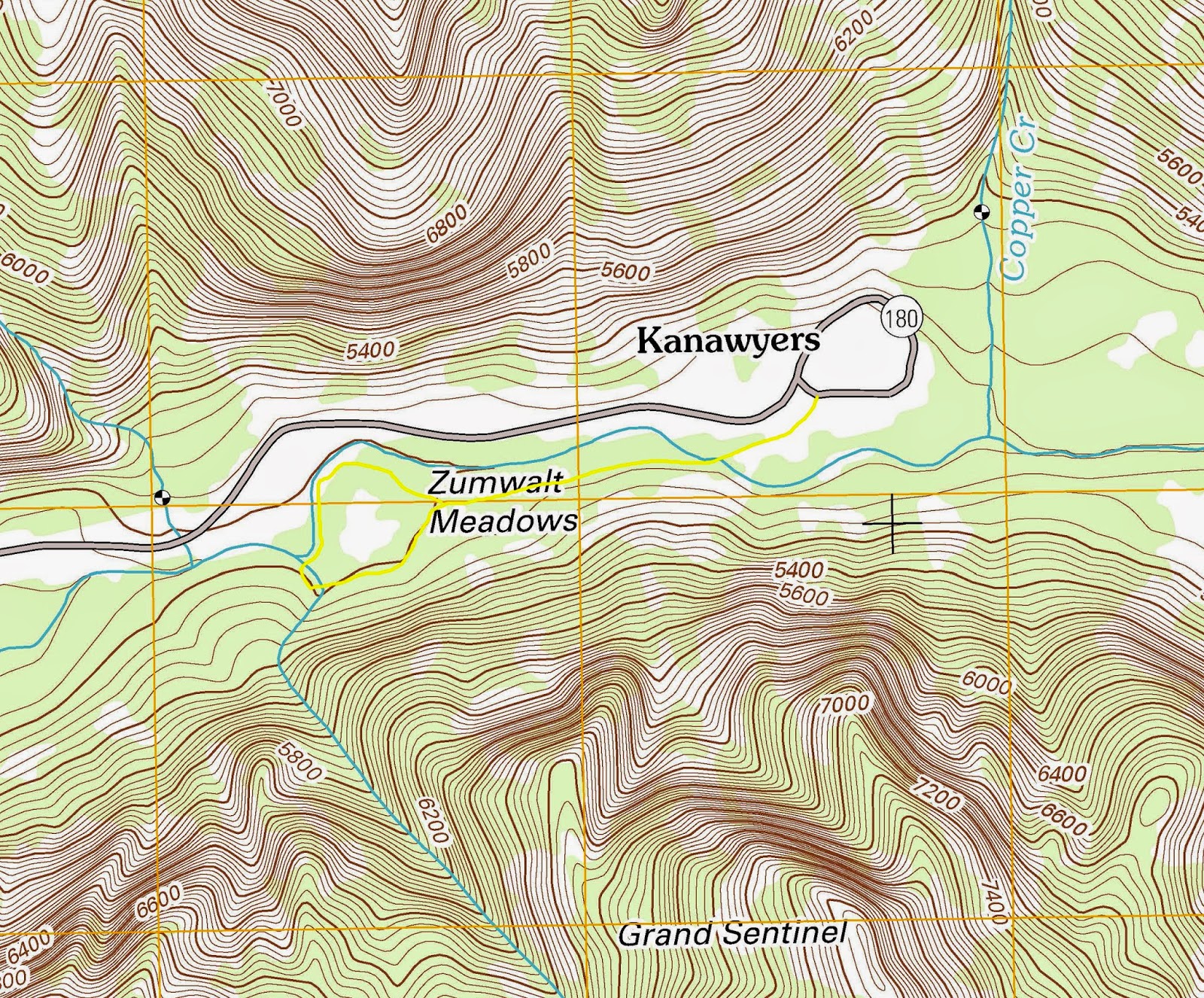 We embarked on our hike as planned, but I wasn't very hopeful about seeing any bears there.
My sister wasn't bothered the least bit. She, as well as her husband, were completely taken by the scenery.
Kings Canyon is very deep. The granite walls of the surrounding mountains loomed over us as we walked along the trail.
The river itself wasn't running very high. The long drought was evident even here.
Four years ago, at that very point before crossing the bridge I had seen a mama bear with two young cubs pulling apart green pine cones and feeding on the unripe pine nuts. Me and my family had waited patiently for the bears until they went away.
This time there weren't any bears by the stream. We crossed the bridge and moved on.
The trail descended into a grove of pines, many of which were badly burnt. 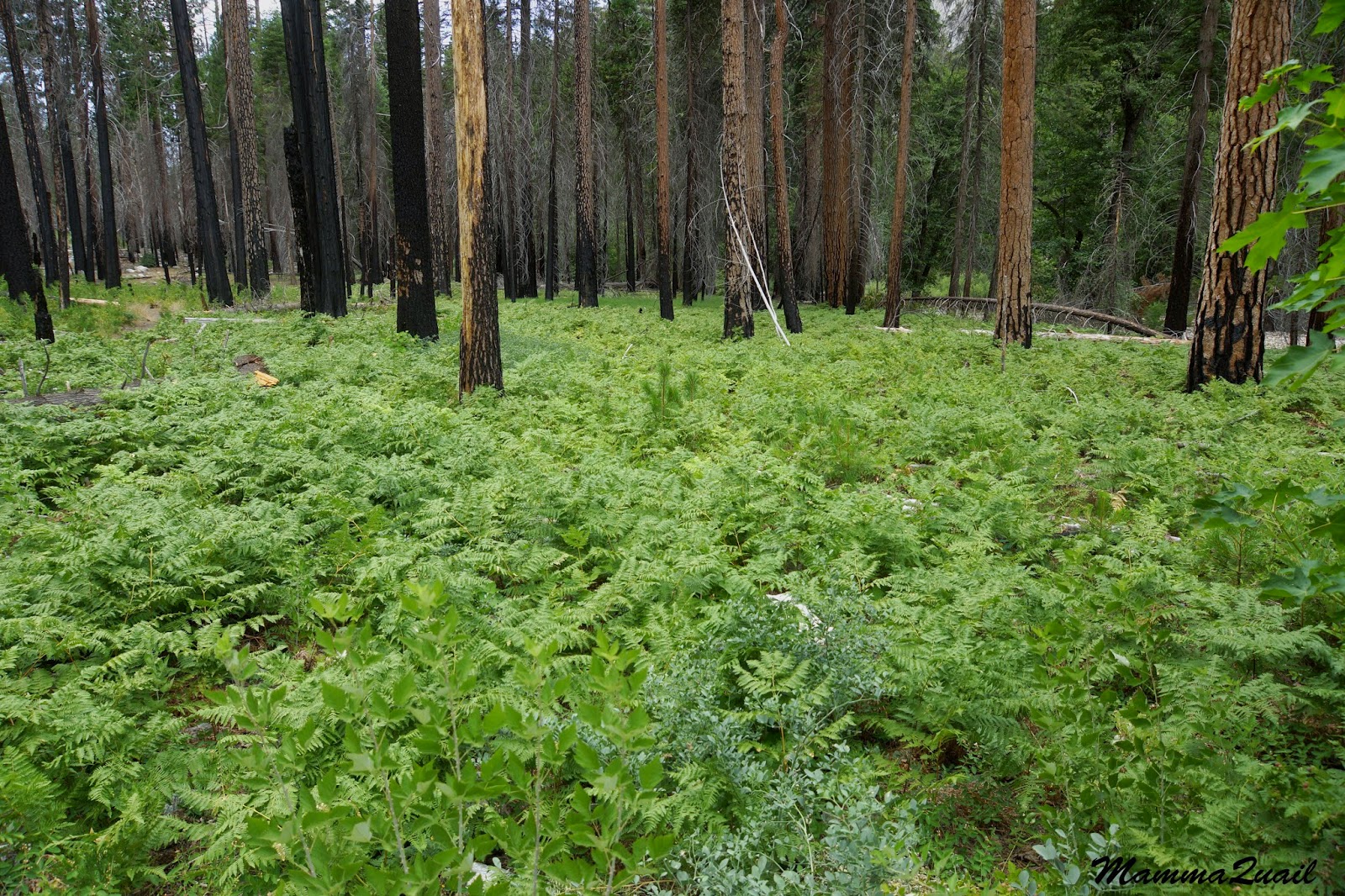 The undergrowth had many nice bushes, some were even blooming.
On of the most common shrubs there was the raspberry. And the vines were loaded with ripe berries.
Our hike came to a screeching halt and everyone got busy looking for berries. I tried to keep my little company from straying off the trail. Luckily the blackberry thorns were persuasive as well.

Another very common shrub there is the spreading dogbane. Unlike the already fruiting raspberries, the dogbane was still in bloom.
Here and there - a splash of color on the green background.
Bright colors draw the attention of pollinators to the flowers. Naturally, they also draw my attention as well.
At the edge of the burnt pine grove the trail splits into the Zumwalt Meadows loop. We commenced hiking left along the southern trail, right under those looming cliffs. 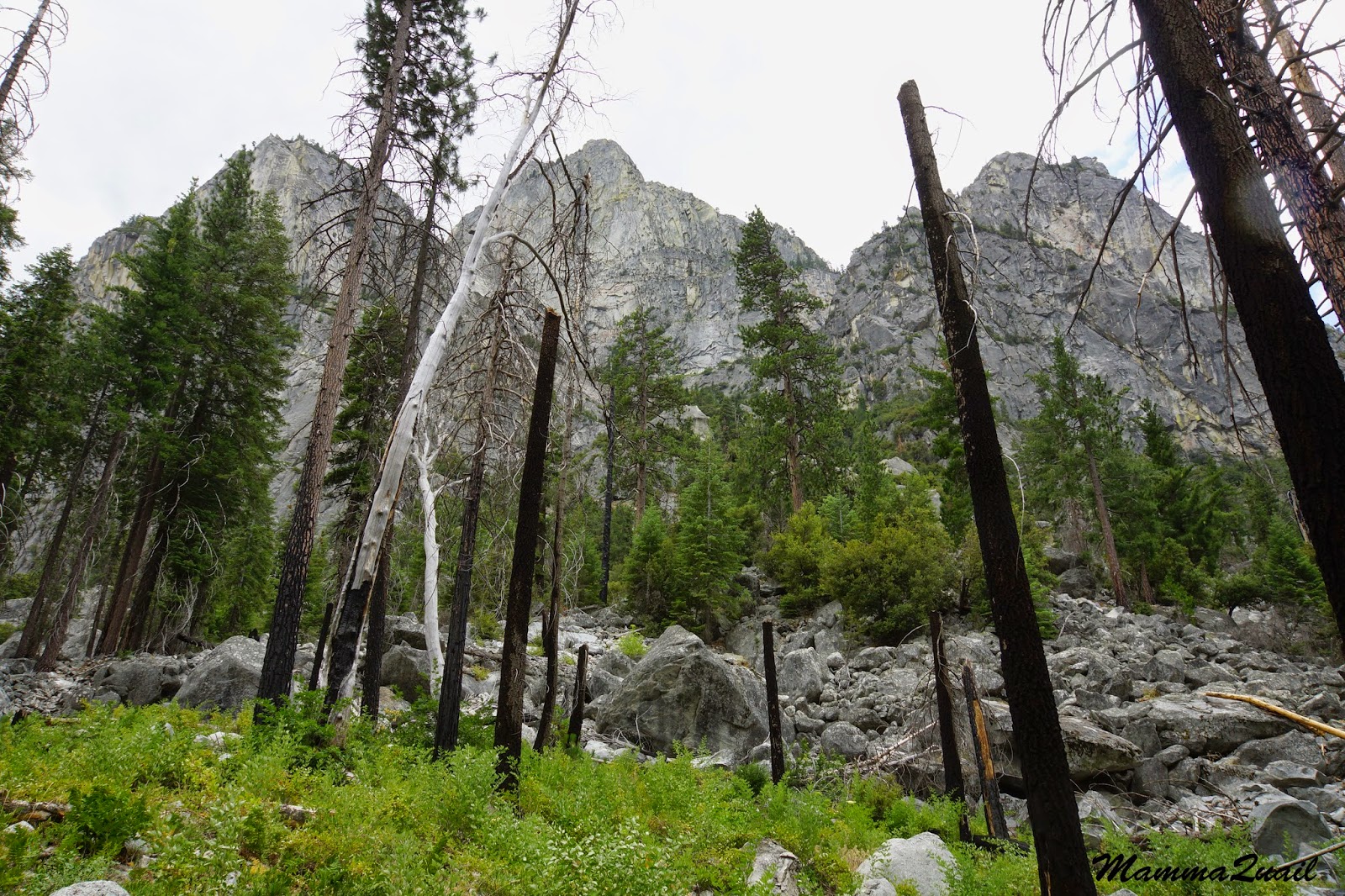 The trail meanders between and over fallen granite boulders. The trail is well maintained and there was no need to scramble on the rocks. No need - but strong desire to do so. At least amongst the youngsters :-)
I was satisfies with looking for interesting phenomenons, such as this pine tree trunk, fused to a rock. 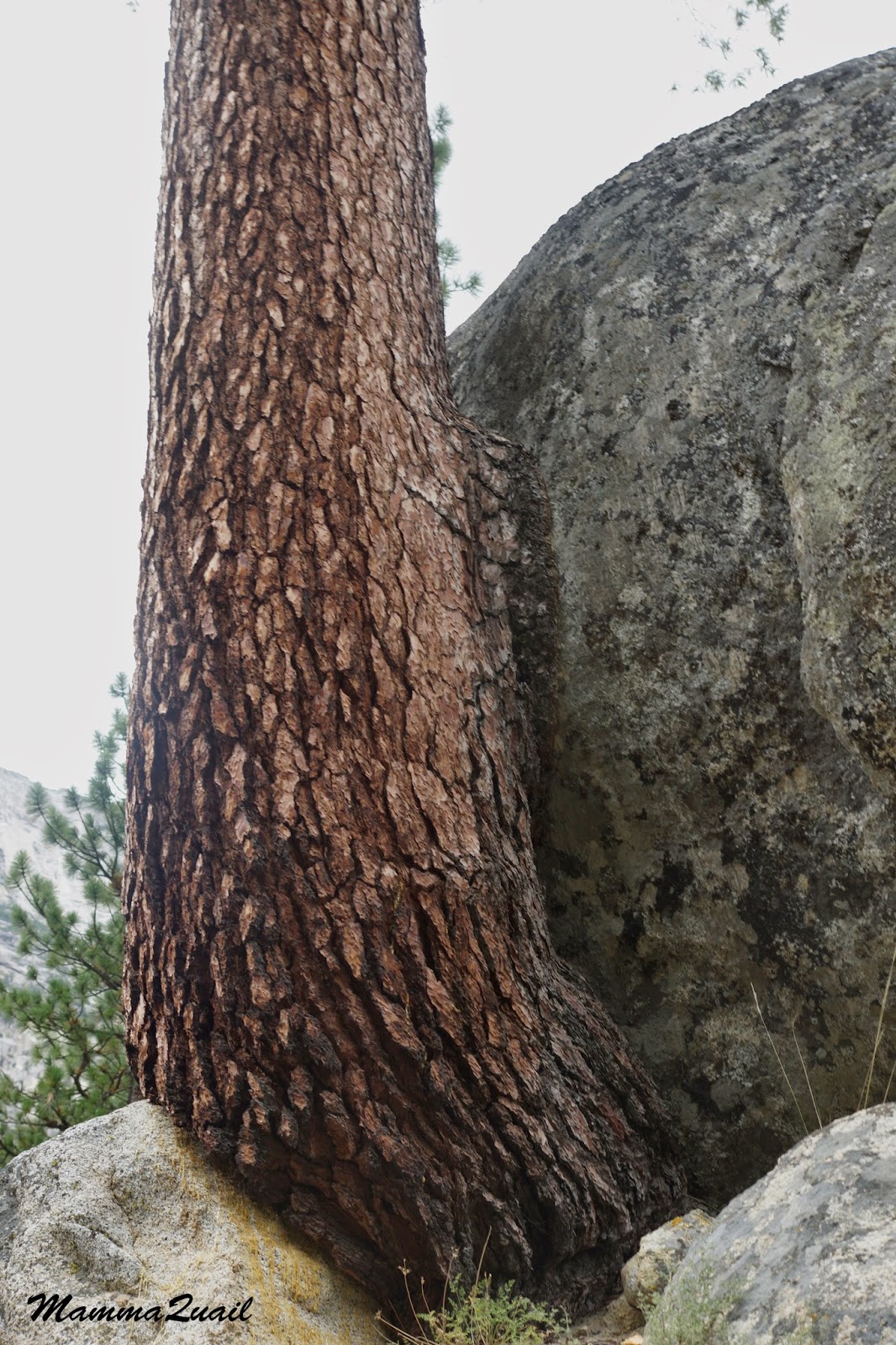 Eventually the trail descended toward the meadow and we had a nice view of the green flat, bordered by conifers. As hard as we looked, we saw no bears there.
When we got closer to the meadow we reconnected with the river at the point where it absorbs a tributary creek.
We found a place to sit and enjoyed the view. I tired photographing some birds that were down by the river, but I don't have Papa Quail's patience and eventually I gave up.
At the river fork the trail also forks - the left branch leading to Roaring River Falls a couple of miles down the canyon. My companions preferred driving to the falls rather than hiking there and adding 4 more miles to our trail. It being already late in the afternoon, I conceded without a fuss. After our break we continued along the right branch, looping around the meadows.
A patch of milkweed came to view. I remembered that patch from previous visits and immediately veered off to look for monarch butterflies.
There were a few butterflies there. Not as many as I remembered, but still. I even managed to catch a few orange pixels the belong to speed-flying monarch. 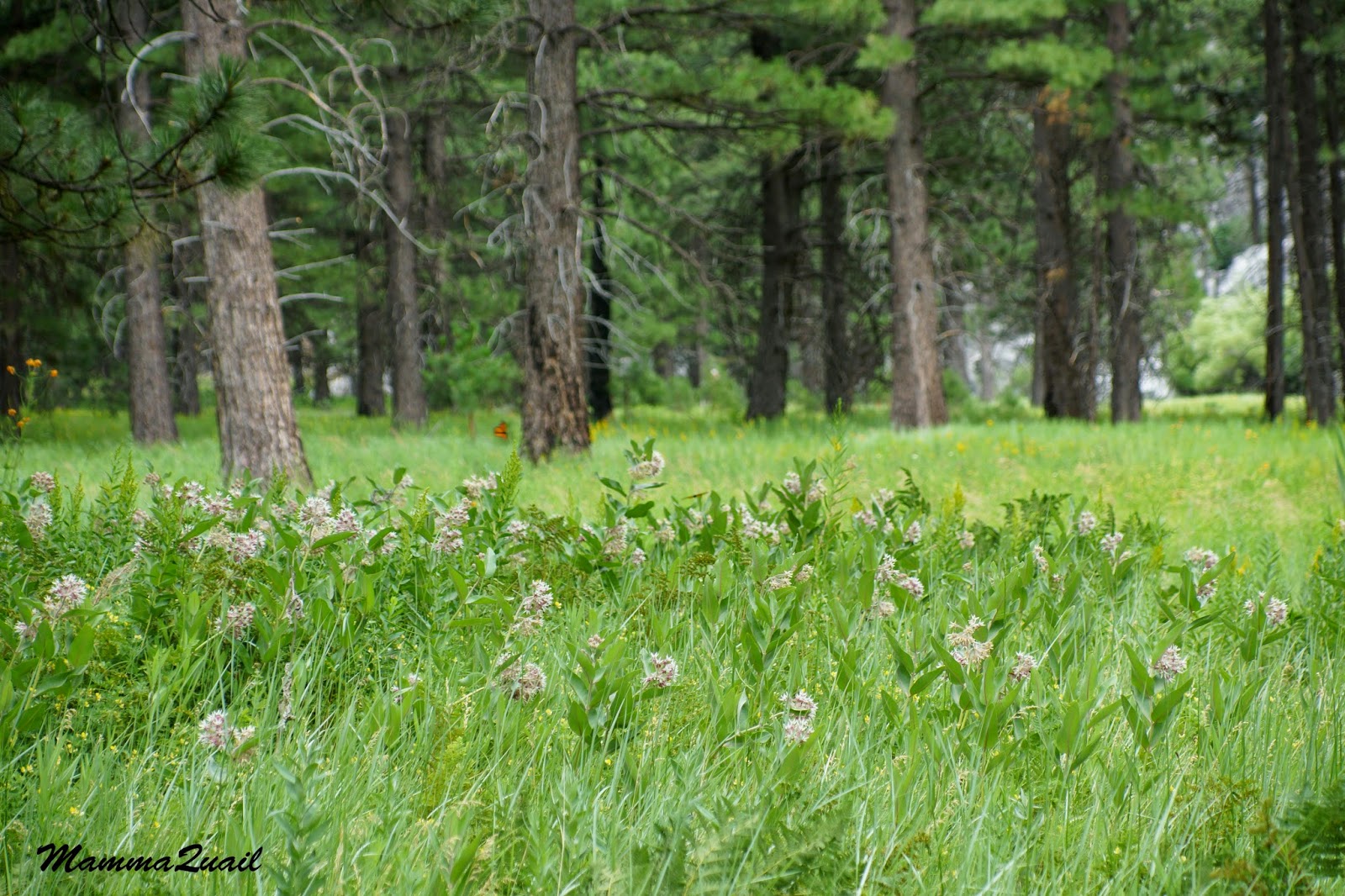 The milkweed itself is a lovely sight. Very pretty flowers.
Between the milkweed plants I noticed orange spots that belonged to leopard lilies.
As we continued around the meadow we reconnected with the river once more. There is another, even closer trailhead to the meadows, and the parking lot there looked full. Most of the people that stopped there, however, settled for just a quick view of the meadows, then went straight to the water.
Our children did the same. We had a long and refreshing stop and the kids waded up and down the water, building pebble fortresses and looking for bugs. 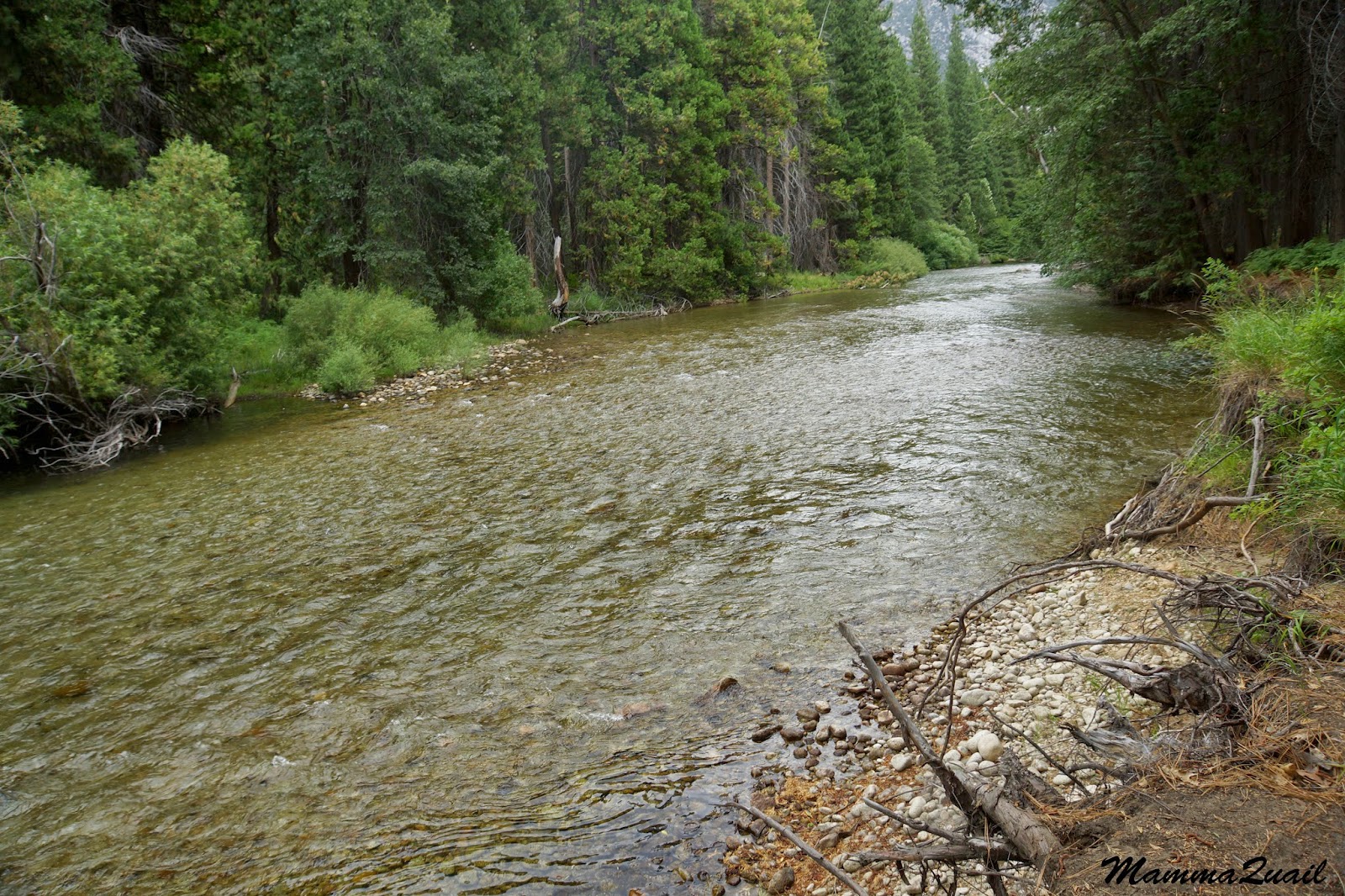 The sun disappears early in a deep canyon. When it started getting cold we managed to pull the kids from the water and convince them to wear their shoes.
Back ob the trail we left the meadow tour right while the trail plunged into the trees once more.
Not used to the sight of squirrels, my sister and her family got all excited when they spotted one that was too busy dismembering a pine cone to worry about us.
By the time we reached the end of the loop and started back on the trail to the parking lot my sister decided that these bears I told her about were nothing but a phantom. My 4yo niece didn't lose her hopes and started calling the bear to come out.
Something must be said about the magic of little children because not even a minute goes by when my nephew points at the thicket and announced: bear.
And there it was: an adolescent bear feasting on raspberries.

We stood there for a long time, transfixed, clicking the cameras. It was a young bear, and as much as we looked, we didn't see any mama bear in the vicinity.
While any wildlife sighting makes me happy, seeing a bear is on a different league altogether. There is a special kind of rush in viewing an animal as awe striking as a bear, so close, without any fence between us.
The bear didn't seem to care about us one way or the other. I take it the bears there are quire used to human presence. Fortunately none of the bears we ever saw in that park, including this one, ever approached us to loot our food. 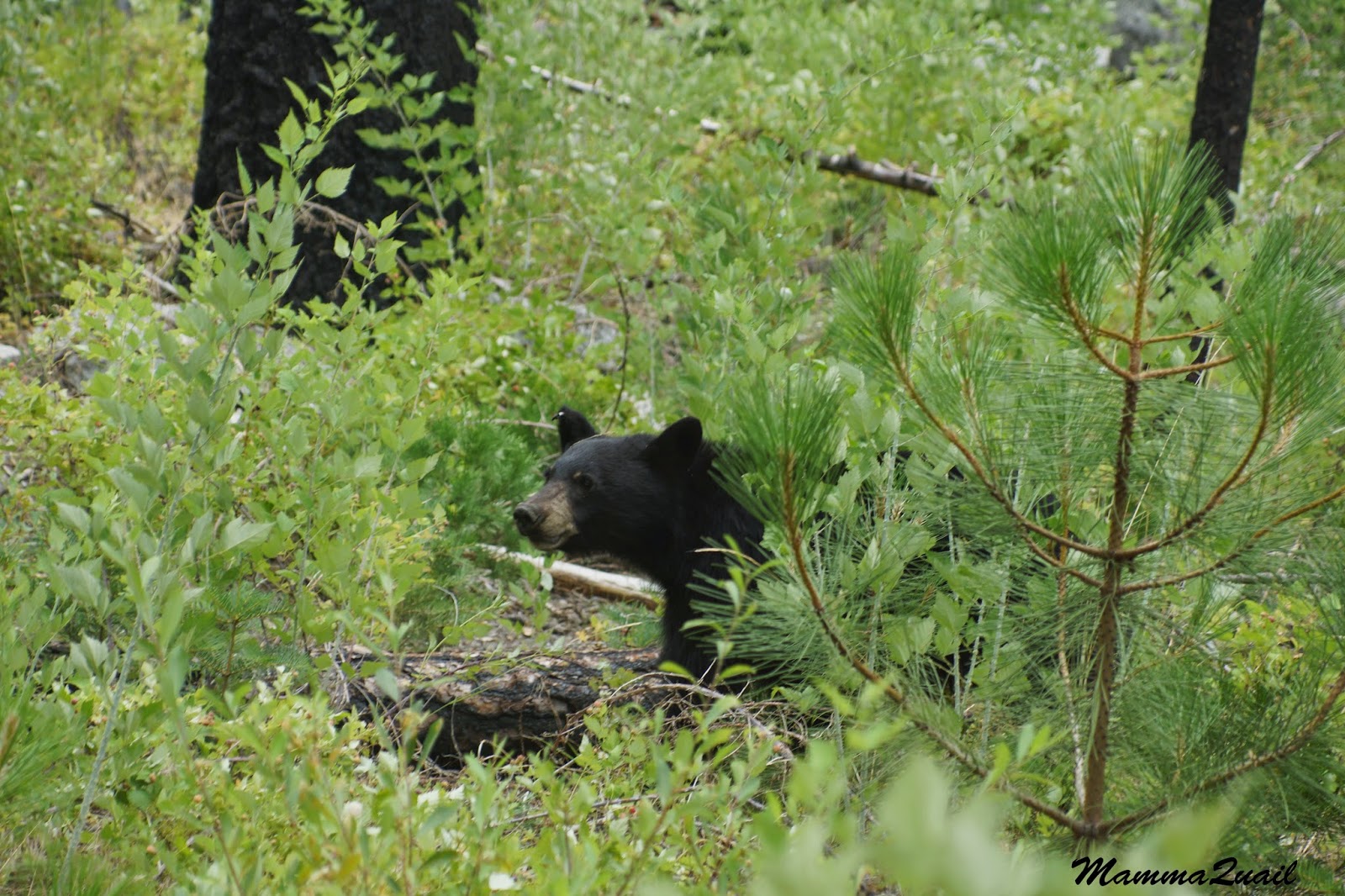 We returned to the car giddy and excited. The expression on my sister's face was as if she just been to heaven. I felt like I finally delivered :-)
Normally a visit to a pretty waterfall would be the climax of a hike. This time, however, the waterfall was a good place for the after climax. We drove to the Roaring River Falls and sat by the pool, relaxing to the sound of the waterfall and reflecting on our hike at the Zumwalt Meadows.
And here's some more of that bear: a short video clip I took of it eating raspberries: