Around Triangle Lake and out to Widow Lake


On our second day at Caribou Wilderness we were all ready for a good hike. The morning, however, started with rain. The children convened inside my friends' tent and played card games. I didn't mind the rain, which was more like a light drizzle, so I declined the invitation to join. Instead, I left my chika in care of my friends and went on an hour of solo walk, circumventing Triangle Lake (about 2 miles long).

The joy of backpacking begins even before going into the wilderness. Part of the fun is the game of weight calculation, of course. It's about laying out the equipment, adding their weight in ounces (or grams), discarding some, adding others, deciding what is an absolute essential and what's luxury, packing and unpacking a gazillion times until it's time to go whether you're happy with the result or not.
The one item upon which the rules of this game don't apply is the camera, which was by far the heaviest non-essential item I brought along. Never once did I consider leaving it behind. I did leave behind, however, all the speciality lenses, choosing to bring along just the basic, multi-purpose lens. So most of my photos of this backpacking trip (that aren't of my chika and our friends) are of scenery. That, and the intermittent  rain, of course, which made me reluctant to pull my camera out all too often.
There were a few wet birds in the branches. The only other evidence of wildlife were deer tracks in the mud.
I saw many blue penstemon flowers, small and delicate. Alas, none of my photos turned out good enough. Most of the hike I didn't even pull my camera out. I simply walked quietly along the trail and cherished the solitude I had for the first time in a long while.
As I came around the lake's south corner I was surprised to see a couple of day hikers on the trail. They were the only other humans I've seen throughout the entire backpacking trip (except for our friends, of course). I didn't engage them in any conversation, they too seemed to appreciate the silence.
It drizzled on and off throughout the hike. Mostly on. There was no wind and it wasn't really cold at all. Other than having to protect my camera, I found it to be quite pleasant. The constant dripping was calming and very beautiful. The lake surface was fizzing with the expanding concentric ripples. Little by little, one droplet at a time, I was getting soaked.
It took me about an hour to complete my hike.By the time I reached the campsite the drizzle had stopped. We had a quick lunch and went back on the trail, intending to do as much of the planned hike as possible before the rain renewed.
My friends planned to hike to Widow Lake, which is within the boundaries of Lassen Volcanic National Park, about 3 miles to the west.
I was amazed at how fast our friends were hiking, even when with their 4yo who insisted on walking himself rather than be carried. My chika did a good job keeping up. She was too busy playing riddles with her friends to worry about the pace. I also kept the pace, but I had not a second to spare for photos, except on moments when we stopped to put on the bug repellant or to drink a sip of water, or when my friends tried to convince their toddler to let them carry him.
I love walking in the woods when everything is wet. The colors are much stronger and more intense. Same goes for the smells. Too bad I cannot post here the scent of the forest in the rain, it was so intense!
Whenever I saw flowers I stopped to take photos. Each stop I was done in time to see the last of our party disappears behind a curve and had to run after them. Most of my photos didn't come out right. Some did.
When we descended to Widow Lake (I haven't figured out yet why does it have that name) I was panting hard from all the running. Everyone else seemed to be tired as well. We all slumped down under a large pine tree, had our snack and relaxed.

Before too long, however, the children felt rested enough and got up to play. They skipped rocks on the calm lake surface (I'm glad I took the reflection photo before the rocks started flying into the lake), and my chika even tried skipping pine cones. Then they looked for interesting tidbits and found a frog. Then they skipped some more rocks. Then they started complaining they were bored.
Then it started raining again.
It was time to head back to our campsite, but then about half of our party decided it was time to go behind the bushes for some private time. I took the time to look for more flowers.
Eventually we were all gathered together and we started hiking back on the same trail we arrived at, this time at a much slower pace.
At a slower pace I could notice more things, like this decomposing fallen log. I love the color contrast of the reddish disintegrating wood with the lush green of the manzanita shuns surrounding it. I pointed it out to my chika but she was more into playing with her friends. 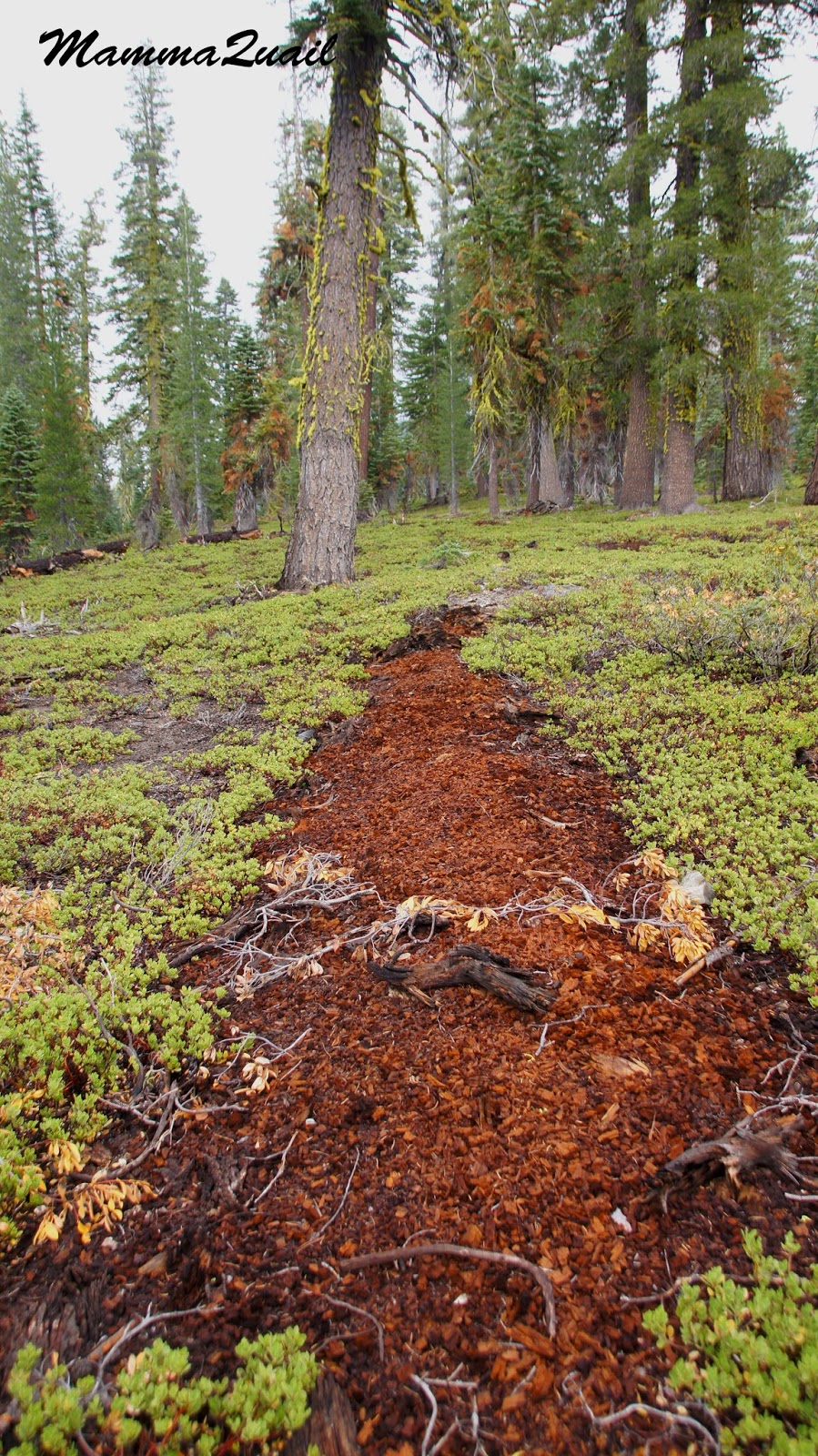 The drizzle stopped. We kept walking. At some point my friends stopped to exchange their toddler one more time and I found myself racing after the three older children that kept on walking ahead. Then one of them cried out, "Snake!"
I hurried forward and got there just in time to take a photo of the cute, sleek reptile as it halted on a rock. It quickly slithered into the shrubs and by the time my friends caught up with us it was gone.  That pretty garter snake was the most exciting wildlife we've seen on that hike.
Not that the squirrels aren't cute, they're simply too common to get excited about :-) 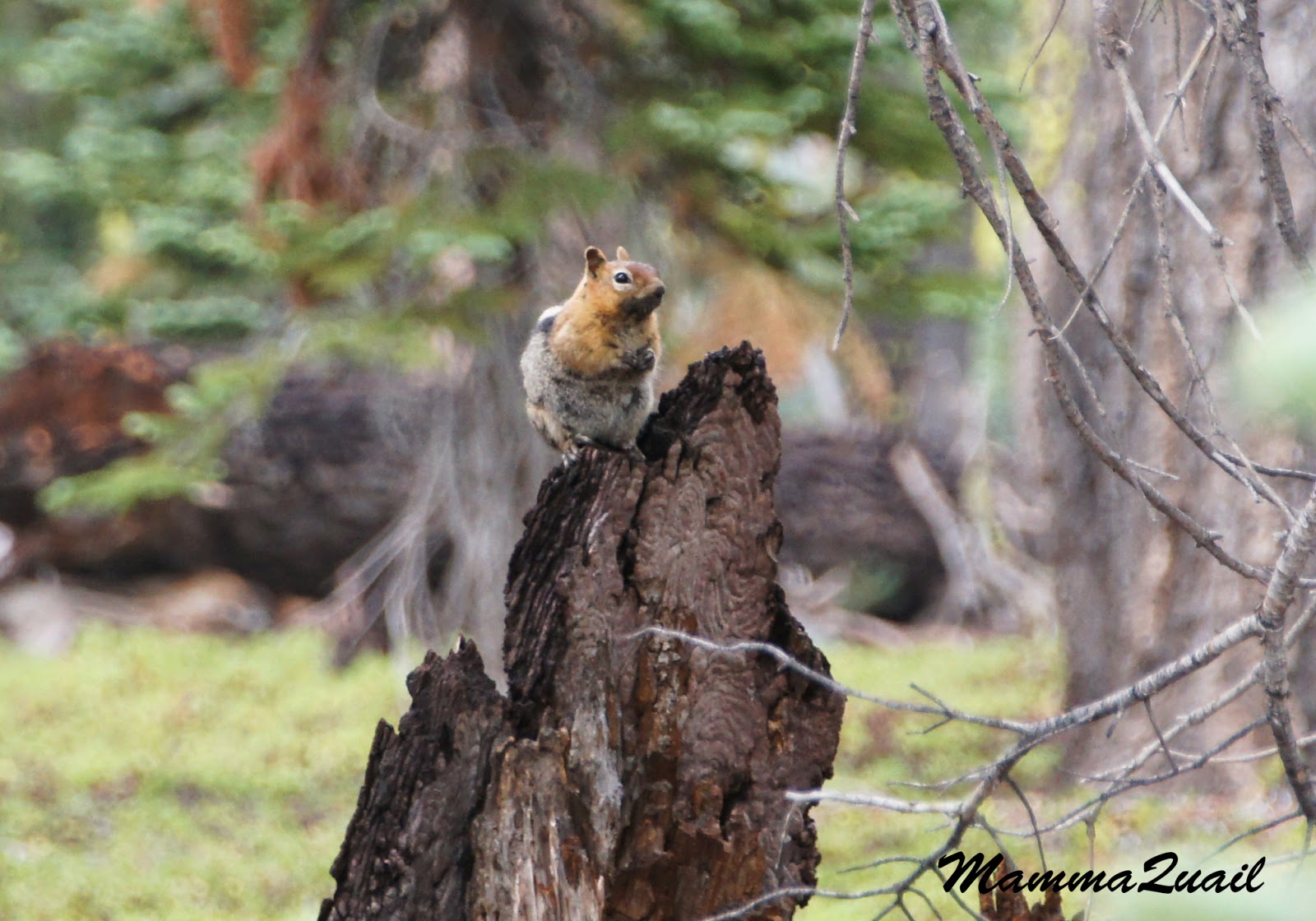 We arrived at the camp, had a nice dinner and very soon after the sun set we crashed inside our sleeping bags. Outdoors sleeping is best on the second night of camping.