The Last of The City's Wild: Lobos Dunes at San Francisco 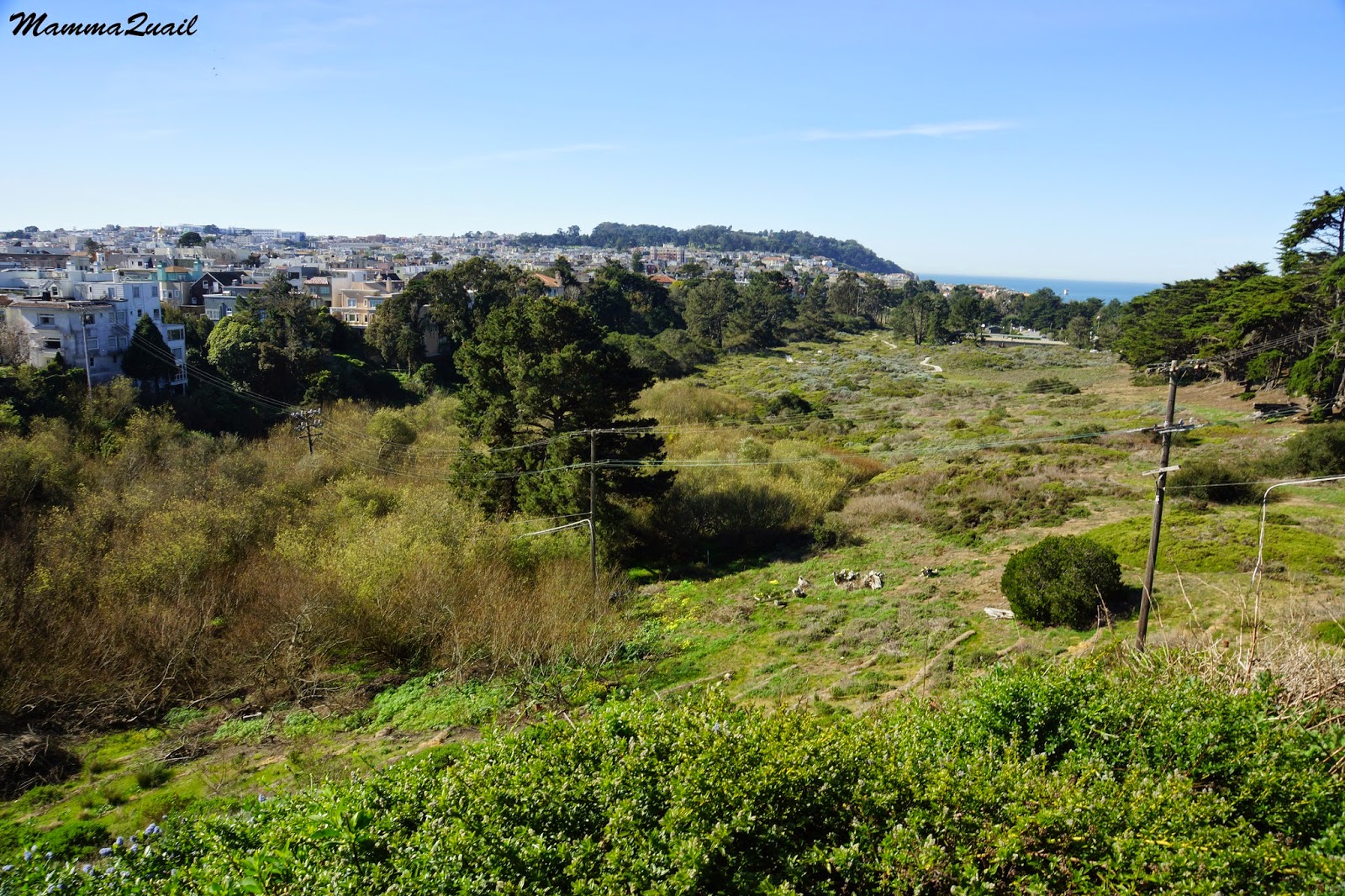 I walked around San Francisco many, many times. But never did I think of these walks as hikes. Certainly not Nature hikes. When I wish to go for a nature hike I normally leave the city behind. The best view points in San Francisco, be it Corona Heights Park or the Coit Tower, the view below is of a sea of cement and asphalt. This view is considered by so many San Francisco residents and visitors to be one of the most beautiful in the world, but to me it brings much sadness to think of what had been covered by this splendid human mega-hive.
San Francisco isn't devoid of Nature, though. Far from that. As far as urban areas go, San Francisco does pretty well trying to salvage and keep as much of its natural heritage as possible. And one of the greenest areas in San Francisco and most promising in terms of natural restoration is the Presidio.
The Presidio - it's that mass of dark green just south of the Golden Gate Bridge. Used to be a huge military base - what saved it from intensive urban development. Turned over to the National Parks system merely 20 years ago, the Presidio is now one of the best places to visit in San Francisco for anyone who'd like to see more than Chinese stores, victorian houses and hairy bums.
I was there with all the Quails last February for a nice weekend vacation in which we did some exploration of thePresidio's more natural spots, and our first port of call was the Lobos Dunes Nature Area.
The area of Lobos Creek used to be all sand dunes bound with indigenous coastal vegetation. There is a plaque there, displaying a photo of an old painting of this area from the early Spanish era showing sand everywhere and no human structures at all.
The creek's area, being part of the Presidio, was spared the urbanization that quickly covered the tip of the peninsula. It is the last place in San Francisco where the native vegetation is still dominant.
There is an active effort to keep it like that. Everywhere there were signs of exotic plants removal and replanting of native species.
There is a good size parking lot just off Lincoln Blvd and the trailhead is right by the entrance to the lot. We parked and immediately Papa Quail took off following the tweets in the bushes.
It was a sunny day, hotter and more beautiful than should be in February. It was just before 10:00 am on a Sunday but there were quite a few people there already. Most of them, however, went straight to Baker Beach. We, on the other hand, turned our backs on the ocean (for now) and walked up the boardwalk into the dunes.
It's good to see an protected wild preserve within The City. The City, though, is impossible to ignore.
The tweets Papa Quail was following eventually produced a White-crowned Sparrow. Sparrows, which are very common bush birds, were chirping all over, announcing the untimely arrival of spring.
Shiny spiderwebs attract me with their intricate workmanship (or workspidership, to be more accurate). They're even more attractive when still glistening with morning dew. 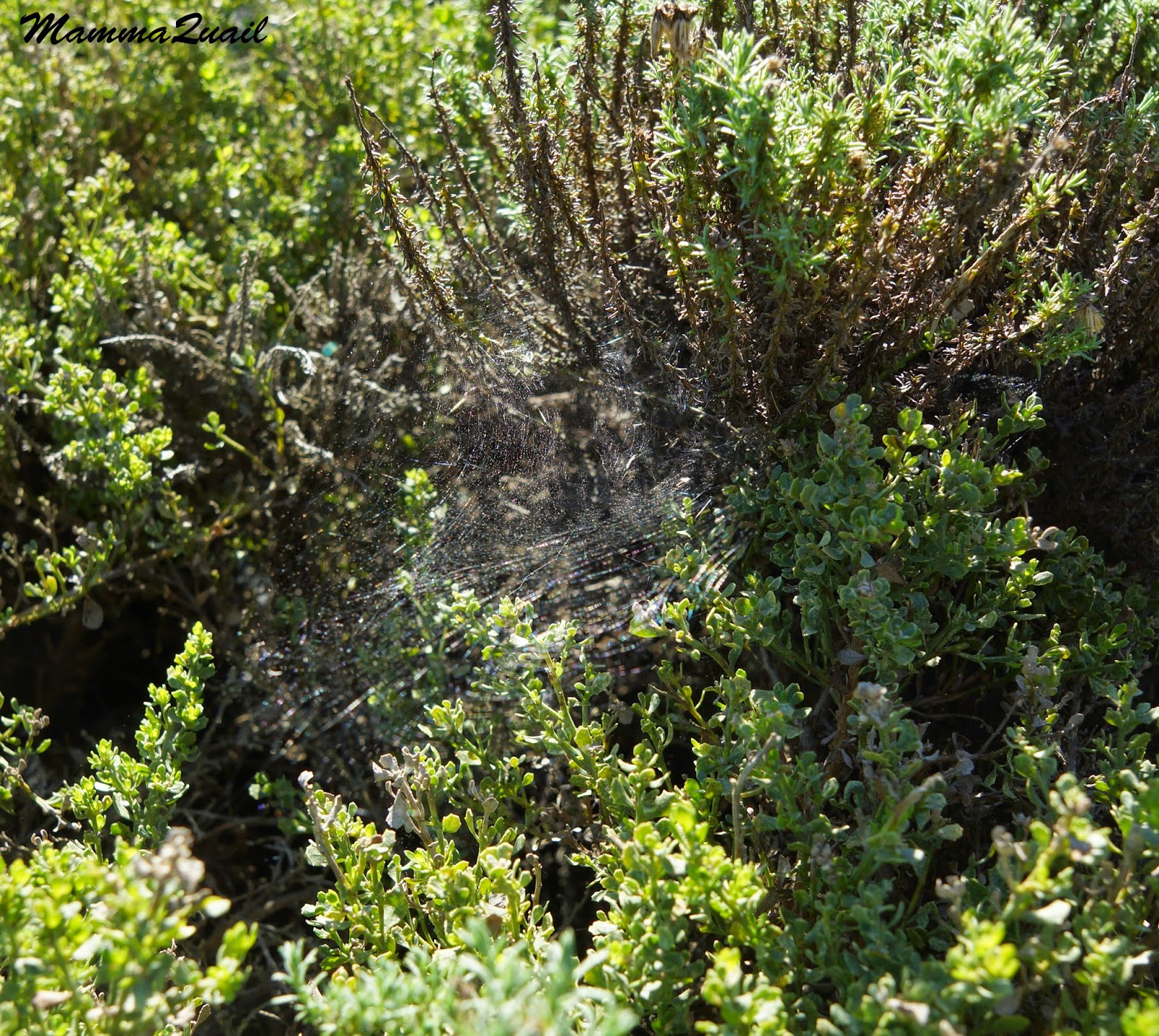 Mock heather is the dominant shrub at Lobos Dunes but silver bush lupines are also pretty common there, breaking the bright-green with their silvery-gray foliage and adding a beautiful purplish-blue touch to the scenery.
An early spring in February - the Indian Paintbrush was also in bloom.
All restoration and conservation efforts cannot completely undo the damage of invasive weeds spread. A common invasive weed that seems to be everywhere this year is the sourgrass. It was present also at Lobos Dunes.
Lobos Creek itself is fenced off, which is, I think, a good thing. Better for the wildlife, anyway. The sand dunes themselves are all bound down and covered with the coastal vegetation. In a few bare spots though, one can still see the natural sand.
The trail eventually takes uphill and into a grove of Monterey Cypress that has some pines mixed in.
At the top of the hill there is a nice view point to the south-west. The view point area is nicely done and is planted with may native shrubs. The view shows the clear line between modern man's habitat and the closest approximation to what had the area been before development ensued. It also shows how little of that wild is left within The City, and how precious it is. The last stronghold of San Francisco's Wild.
Going downhill is at the same trail. Movement in the trees caught Papa Quail's attention: a couple of nuthatches where performing their spring activities on a nearby dead pine tree.
On the ground the juncos were doing the same.
We descended from the hill and walked out of the shady grove and into the open sunlight. The trail continues to loop its way to the parking lot at the bottom of the hill. A new growth of manroot was crawling over last year's dry vegetation.
Another common hillside bush that surprised me was the sticky monkeyflower. I didn't expect to see it bloom so early in the season.
The chikas grabbed my attention - they saw a lizard sunning itself. It didn't bother to move, just gave me a wary look. Papa Quail came over with his camera and took a photo.
The trail is short, easy, and very interesting. We didn't expect to be alone there, and we weren't. It is very easy for such a small nature area to be lost in a big city such as San Francisco. To be littered, trampled and destroyed with human overuse, legit or not. Still, it seems that the preservation efforts are so far successful in keeping this place relatively clean and as close to wild as possible. It appears that the locals also wish the Lobos Dunes to remain the precious gem that it is for the years to come.
By the time we got back to the car it was already lunchtime. While we were walking at the Lobos Dunes the parking lot had filled up completely with beach goers and a hopeful driver was waiting patiently in her car for us to vacate our spot. We were on our way to lunch and then - to the Ocean.