From Petite to XL: The Pygmy Forest and the Beach at Van Damme State Park

Grandma Quail was the first of our family to step on California ground. She did so a long time ago, touring around the Golden State with Grandpa Quail and another relative who'd showed them around.  The evening before our hike at Russian Gulch State Park she was telling us anecdotes from that long ago trip.
"There is a forest of dwarf redwoods somewhere around here," she recalled. Maybe we can check it out."
After spending some quality time with Google at the hotel room that night I soon found what she was talking about. It was called "The Pygmy Forest," it wasn't redwoods, but pygmy pines and cypress, and sure enough, it was nearby - it was in Van Damme State Park, just a few miles south of Russian Gulch SP.

Needless to say, the Pygmy Forest made it on our list for the day. So after a good, hearty lunch picnic at Russian Gulch SP we headed south to Van Damme SP to check it out. 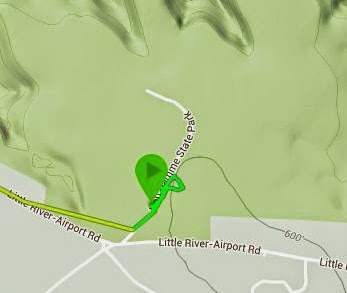 We could have hiked to the forest through the park but after a short debate in which some hurting knees and floppy chikas had the upper hand be drove around the park through the town of Little River to the nearest access point where we could park the car right by said forest. From there, the entire hike is just a 1/3 of a mile of a really easy boardwalk loop.
The trees around by the parking lot were no pygmies but beautiful full-size pines.
Soon enough though, were had entered tree Lilliput kingdom.

Surrounded by full-size trees is a small patch of forest where similar trees that can be decades and even hundreds of years in age, grow to be shrub size.
Information boards, strategically placed throughout the loop, tell the story of this forest. In short - old soil. This area is an alluvial plain that has no drainage and there is no turnover period for the soil accumulated there. It is, therefore, a very poor soil that cannot support the growth of full size trees.

And not only do these trees look stunted, most of them look pale, sick with lack of iron.
Not all of them though. Some of the cypresses we've seen did look quite comfortable in petite appearance.
We didn't actually see the old soil of the forest. It was covered with fallen leaves and patches of lichen.
But the biggest surprise at the Pygmy Forest were the rhododendron bushes. That they were there - not a big surprise. Also not their smaller than normal stature. But they were blooming! In November! And not just one random flower but many. A beautiful site it was, and also a disturbing reminder that the environment wasn't 'behaving' as expected. Not this winter.
After our visit at the Pygmy Forest it was time to keep our promise to the chikas and take them to the beach. Not that it was such a sacrifice :-)
The beach at Little River isn't a part of the state park and we didn't do any hiking there except from the car to a nice spot on the beach. There we sat and observed the ocean and our fellow beach goers, both human and avian.
The humans we excluded from the photos.
I saw two types of birds on the beach - Black Oystercatches and Seagulls.
Papa Quail on the other hand, felt like having been invited to a party and kept photographing each and every bird he saw. Later he sat with me and explained to me in pained patience that not all gulls are alike. That there were several gull species on that beach that afternoon and they were clearly distinct (yeah, the spot on the bill was dark instead of red or the legs grey instead of yellow. How could I not tell the difference?)
And that at least one of these very distinct gull species was a very rare sighting: a European Common Mew Gull that is never seen in California. Well, we saw one :-)
I guess I'll fever make a true birder. Seagulls are the true test of one. Not only will I need the ability to tell the different species apart but I'd also have to care enough in order to do so ...
And maybe there's hope for me still. After all, I did learn to identify the Western Gull (and some other gulls) from all the rest.
Oystercatchers are much less confusing and much more amusing. Papa Quail photographed several of these beautiful shore birds that day and I liked best the one that was bathing in the brackish estuary water.

We spent a long and relaxing hour at that beach, enjoying the sun and the peace. At some point I saw a cormorant drying its wings on a far rock and tugged at Papa Quail's shirt. But he was tired by chasing all those gulls and shrugged me off claiming it was 'just a cormorant'. So I reached over him, grabbed his camera and photographed the bird myself. There.
The sun was getting lower and we struggled back to our feet and shook off the sand. With only one objection (little chika's) we agreed to go into the park for one last hike that day, just to get circulation going in our legs again. And so we headed back into Van Damme State Park, to hike the Fern Canyon.