At the Condor's Nest: The High Peaks of the Pinnacles

The High Peaks of Pinnacles National Park can be seen from Hwy 101 when passing the town of Soledad. The stand out, strange, beautiful, and alluring. Last April, on the second day of my solo post Spring Break vacation time, I hiked a wonderful loop trail going up Condor Gulch, ascending the High Peaks trail from north, and descending through Bear Gulch Reservoir and Cave.
On the previous day I had hiked all the way from Old Pinnacles to the Balconies, making it back with very little daylight to spare. Not wanting to have to race my trail again I was out by the trailhead really early. I took the time to have my breakfast there and then hoisted my day pack and started up the trail. It is a nice ascend: a good, clean and easy trail, that's not very steep, yet constantly ascending. I walked slow, appreciating the views.
Condor Gulch was deep green with lush vegetation and spring bloom was all around me. On my first steps I already encountered my prized flower: the Mariposa Lily. Many of them, in fact.

Besides the mariposa lilies there were many, many other flowers. Not all of them California native.
Wildflowers are a springtime spectacle, but the Pinnacles rocks are gorgeous year-round.
Whenever I see a hole in a rock I wonder what's living in there. Usually it's too dark for me to see, and not always I have the time or patience to wait until I see something goes in or out.
I didn't stick around to see if anything flies out of that hole in the rock. The flowers were much more interesting.
But as I was getting higher, the rock pinnacles came into view with all their of striking beauty.
The remains of an old, eroded volcano, the colorful rock formations stand against the sky in stubborn defiance of all the erosion forces, a geological testament of the forces in action in the Earth's mantle. 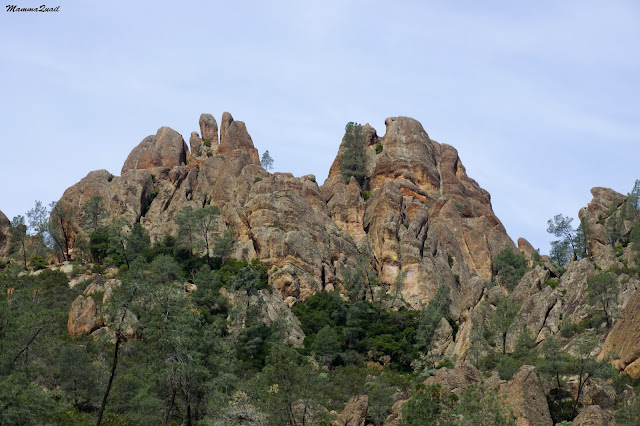 Standing out in soil composition, height and climate, the Pinnacles make a unique and fascinating ecosystem combining riparian, chaparral, and rock face and scree.
And rock face and scree is not usually a place where one expects to see ferns. The Pallaea, however, had evolved to fit these conditions, which are too extreme for other fern genera.
About half way up Condor Gulch there is a nice overlook on the gulch and the narrow, curving rock groove that channels the creek water down to a big drop.
Despite the gulch's name, I did not see any condors there, or anywhere on that trail that day. There were plenty other interesting sights, though. Like the mosaic of volcanic stones embedded in the volcanic ash, pressed all together into a huge conglomerate.
I wasn't the only one there who appreciated that rock: little fence lizards were sunning themselves out in the open, and didn't budge when I passed by, just followed me with their eyes.
I kept going up. The trail isn't very steep, and on some segments it is almost level. Higher up, before meeting the High Peaks Loop, the trail goes through chaparral: a contiguous thicket of bushes adapted to low precipitation. 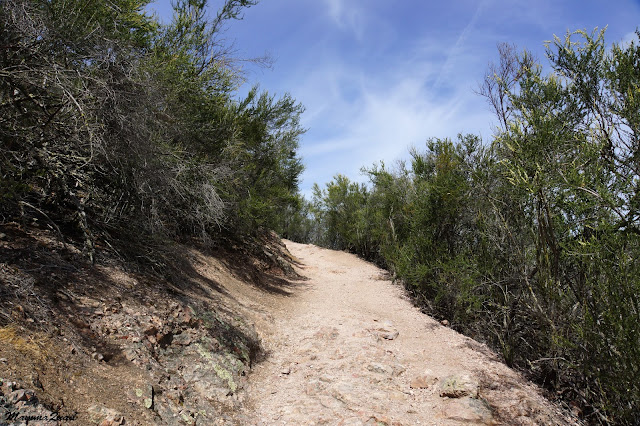 Chaparral comprises of several dominant bush species that vary between geographical areas. In the Pinnacles, chamise and manzanita are most dominant chaparral species, but other bushes make a strong appearance as well. Like the beautiful bush poppy that was in full bloom at the time of my hike.
On my previous hike up the Pinnacles on December 2014, the Indian Warrior was just beginning to emerge from the ground. By April, it had already finished blooming. Thorny leaf rosettes with rusty fruiting stalks were all I could see of this magnificent plant.
Although the Indian Warrior was done, plenty of other wildflowers were at their peak bloom:
The patch of bitter roots was growing near the trail intersection. After a short break I turn left onto the High Peaks Loop and kept ascending. As I was getting higher the views opened up below me.
I was walking at the heart of the Pinnacles. No more mild, round contours, but a field of ancient mythical figures turned to rock with a wave of a magic wand. 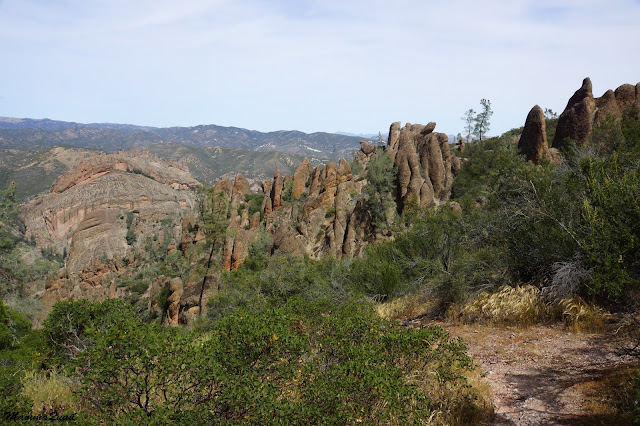 I made my way between these Nature's statues, quietly naming them, allowing my imagination to spin plots with their characters.
Higher up the air was cooler and the soil more moist. I saw the Bird's Foot fern again, green and lush in the shadier spots.
The little alluvial flats and slopes up between the rocks were full of  wildflowers. There were lots of Chinese Houses there.
And in between them: large stalks of larkspur.
The common tree up on the Pinnacles slopes is the gray pine. A beautiful species in which; like oaks, every individual shows personality. In my April visit I saw many baby pines sprouting all around the park. The next generation is here :-)
Turning the corner I saw all the way down to the Chaparral parking area: the trailhead for the Balconies when entering from the west side of the park. The one time I had hiked to the High Peaks was from that side, 17 years ago.
Up on the mountain the trail snakes very tightly between the rock pillars. Occasionally the view opened up a little, and when that happened I got a good appreciation of how high I really was.
Whatever little soil accumulates in rock cracks, it is enough for the gray pine. But sometimes it just isn't enough to hold it upright.
The High Peaks is a loop trail. I connected with the loop from the north and decided to hike only the higher (eastern) side of the loop and descend on the other (south) side.
And so I had more altitude to gain.

And the trail had become considerably more challenging. 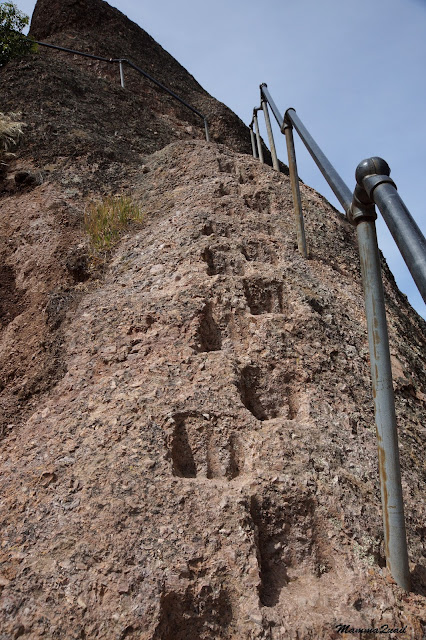 I progressed slowly through a series of rock-curved stairs and terrifyingly narrow trails hanging over sheer cliffs with only a single-bar rail to hold on too at some parts. The trail took me up the highest pinnacles and in between the most striking pillars of rock. I touched each and every one of them, and wondered if there's any social status for the 'Rock Hugger' I had become.
Almost without noticing, I was slowly losing altitude. So engrossed I was by the beauty of the Pinnacles heights that it took me some time to realize I was already descending. 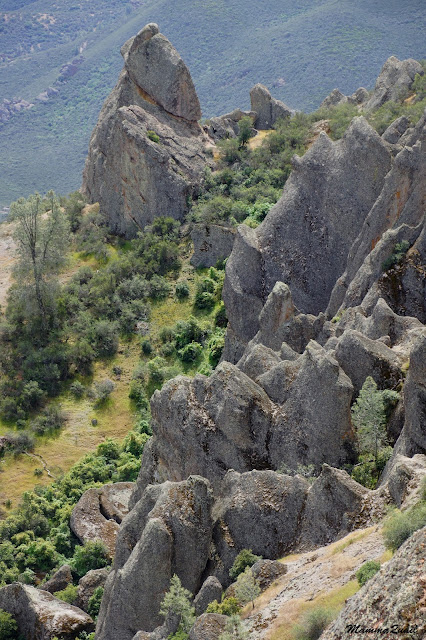 And all at a good time too, because the sun was already going west.
As I got my spinning mind to calm down I once again focused on the wildflowers.
And on the critters that pollinate them.
It was, in fact, the first year I had visited the Pinnacles during springtime, and many of the wildflowers I saw were completely new to me.
So even though the trail down was nice and easy, I descended it slowly and photographed a lot.
The color wasn't limited to wildflowers only. The rocks themselves bloomed with colorful lichen growth. 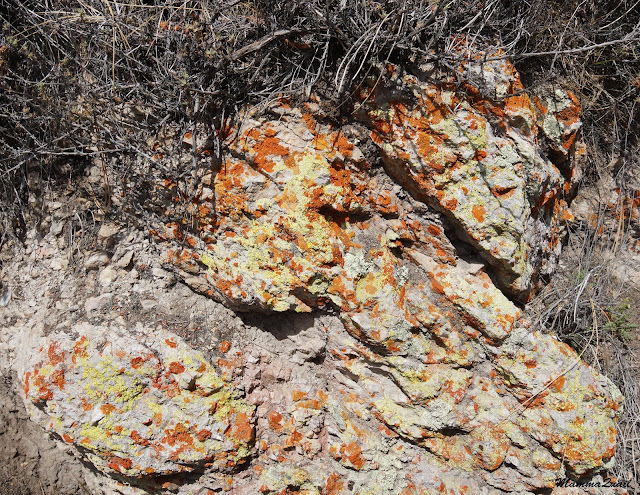 Down and down I hiked, heading southeast towards Bear gulch. I left the High Peaks Loop and its south end and then the slope steepened considerably.
Blues and yellows changed to pinks and purples. A few snapdragon bushes on the trailside, and fellow members of the California Native Plants Society had learned me that this plant tends to grow in recently burnt or otherwise disturbed areas. I don't recall seeing any fire scars in that area, however.
Far below me stood a tight group of rock pillars. On the following week when I returned to the Pinnacles with my hiking group, it turned out to be the perfect spot for a rest stop. 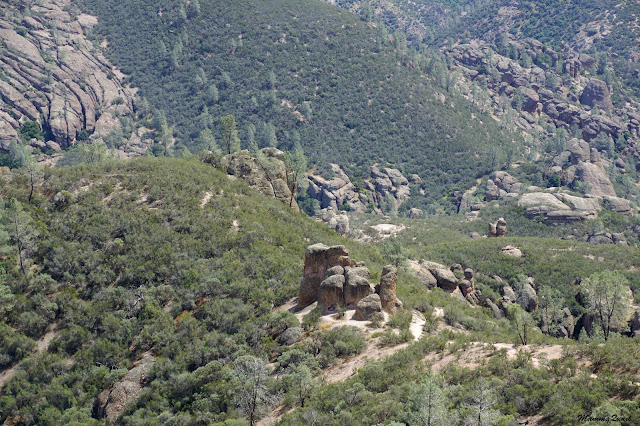 Down, down, down. The trail meandering around the mountain curves, between rock formations, and in one case: right through the rock.
Changing shaded slopes to open scree and chaparral, different plants were now blooming by the trail.
And rock formations that didn't look like much from high up were now revealing their true nature, when looked at from below. 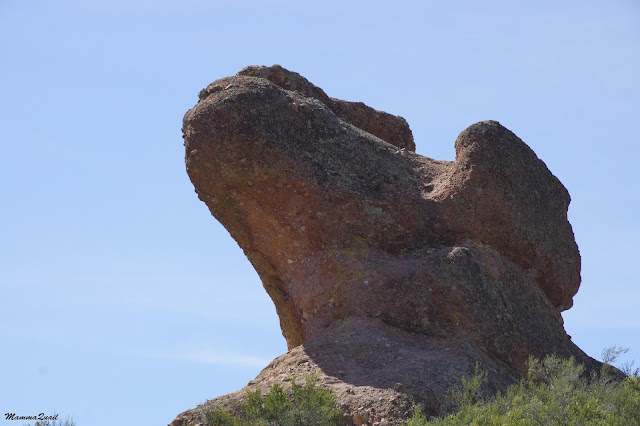 A few bushes with purple branch tips grabbed my attention. On close inspection I saw that the purple tips were covered with dense, woolly threads. On first impression it looked to me just like some kind of fancy fungus infestation. But it was way too regular to be that. This is how the budding inflorescence of the woolly bluecurls bush look like. And a fitting name it has!
I kept going down, descending towards Bear Gulch Reservoir.  I was getting tired and looked forward to having a rest stop near the water. 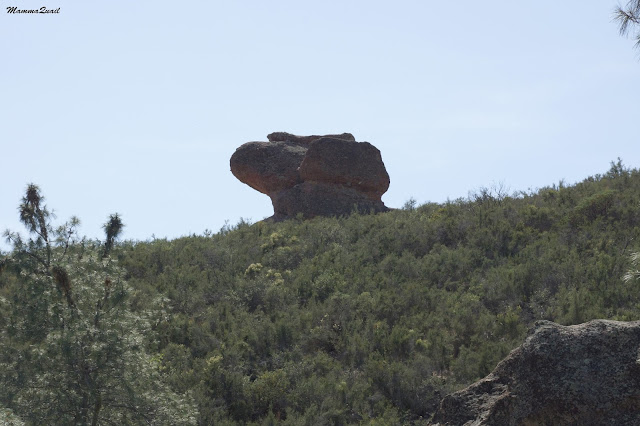 But the shadows are growing longer. I knew I wouldn't be able to rest there for long. I pushed on forward.
A busy chipmunk crossed the trail a few time, keeping a cautious distance from me. 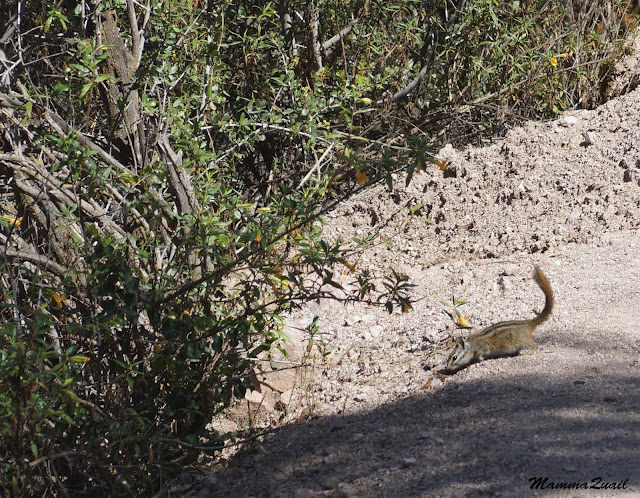 The vegetation on south-facing slope, if not exposed rock, was mostly chaparral. The bushes were blooming furiously. And so were the herbaceous plants.

At last I was near Bear Gulch Reservoir. This reservoir was built in 1934 to provide water to Civilian Conservation Corps who had a nearby encampment in the years 1933-1942.
It was getting late, so despite my fatigue I took the shortest rest stop ever and quickly moved on. A week later, however, when I returned to the reservoir with my hiking group, we took the time to enjoy the place. A little garter snake fascinated by our presence glided over on the water and regarded us for a long time without any apparent concern.
On my solo hike though, I went right down the stairs and into the Bear Gulch Cave. I already posted here about that cave so I won't add more photos here. Besides, I had the camera safely tucked under my shirt at the time: the cave's ceiling was dripping water. It was literally raining inside the cave.
I am posting one photo from my passage through the cave, and that is of a rock pigeon couple, checking out a potential nesting site.
Through with the cave, I increased my pace and darted down the path all the way back to the parking lot, where I finally allowed myself to take a long breath and get acquainted with the local Steller's Jays.

I returned to the campsite with enough daylight to walk around a look at birds :-)

Many thanks to members of the California Native Plants society for their help in identifying plants and enhancing my knowledge of them!