Last year I finished my hike at Almaden Quicksilver County Park with a visit at the park's museum and visitor center (highly recommended!), and chatted with one of the park naturalists. I asked her which of Santa Clara County parks was her favorite, and she said, Uvas Canyon, with musty eyes and a longing voice. Naturally, I had to check it out, and sure enough, it made it into my list of places to hike with my hiking group.

The first thing that welcomed me when I exited the car at the day use parking lot was a hefty madrone tree, laden with fruit.
Adjacent to the day use parking lot there is a large picnic area, very nicely shaded by a magnificent grove of large black oaks. The black oak, so named after its acorns, was a staple for the local Native Californians: the Amah Mutsun tribe.
I hiked there several times throughout the month of October, solo and with my hiking group. All the photos in this blog post are from those hikes.
My original plan was to hike up the Alec Creek trail only to the intersection with the Contour Trail. On my solo hikes, however, I couldn't resist the temptation, so I hiked all the way to the Triple Falls at Alec Creek, and then backtracked to the Contour Trail and on to the Upper Falls and Swanson Creek.
I started the hike by ascending the hill on the Alec Creek Trail. Alec Creek Trail is a wide and comfortable dirt road. About 100 yards up the trail there's a large, green water tank. The water is pumped from an in-site well, and the water level marker was very low. On my first hike there I wasn't sure at all that there will be an water in the creeks.
Across the trail from the water tank there was a group of trees with a very distinct and beautiful bark: Tanbark Oaks. There were quite a few of them along the trail.
The incline is about half a mile long. Mostly under shade, but on occasions the tree cover parts and the trail is lit with sunshine. On one of the curves I noticed a bunch of bright red, succulent berries. They looked very attractive. I didn't taste any, though.
All along the trail I found little dark heaps of feces of an animal that feasted on other kind of berries. The highway poo, likely to have been left there by coyote (although raccoons and foxes were suggested as well as possible culprits). 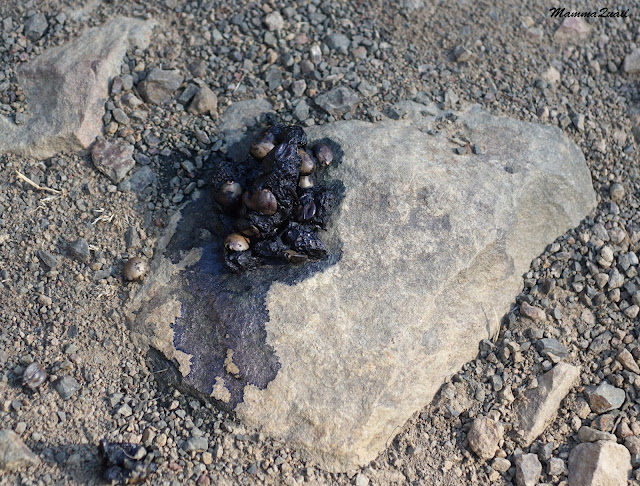 On the sunnier parts of the trail I found the source of the poo berries: a California Coffeeberry bush.
Just before the intersection with the Contour Trail there is a nice vista point with a bench. The view eastward shows the route of the creek to Coyote Valley and the mountain range to the east. Mount Hamilton is a bit north of the visible skyline, blocked from view by the nearby hills.
From far, the forest seemed healthy enough. On a closer look, however, the effects of the long drought were visible and poignant.
As I mentioned above, on my solo hikes I passed the turn to the Contour Trail and went on to Alec Creek. Curving around the south-facing slope, the trail broke into chaparral area. The photo below showed the distinct boundary of the south-facing slope (to the right), covered with dense chaparral, and the north-facing slope (to the left), covered with forest.
Entering Alec Creek, the trail plunges into a deep, and very dark forest. All of a sudden I felt a chill.
In that area there is a grove of young redwood. Only young, because the older ones have been logged before the place became a park.
I arrived at Triple Falls and found them dry. Not completely dry - there was some moisture on the rocks, but there was no flow. I should go back there after a few good rains.
The trail to Triple Falls dead-ends there so I turned around and walked back down Alec Creek. On my way I passed under tall laurel trees. So tall they were that they seriously competed with the redwood. I don't recall seeing laurel trees so tall anywhere else.
The ground was littered with fallen redwood and laurel leaves, as well as dropped laurel fruit. The fruit is edible, although there's very little to eat there, and that too is bitter. I read that the laurel nut can be roasted, ground, and steeped into a coffee-like drink. One day I'll try it myself.
I returned back to the intersection with the Contour Trail and took the turn.
This trail, as implied by its name, follows the contour of the hill with only mild sloping most of the way. The trail is tree-shaded nearly entirely, but at the few breaks in vegetation, I caught a glimpse of the Knibbs Knob Peak across the canyon. 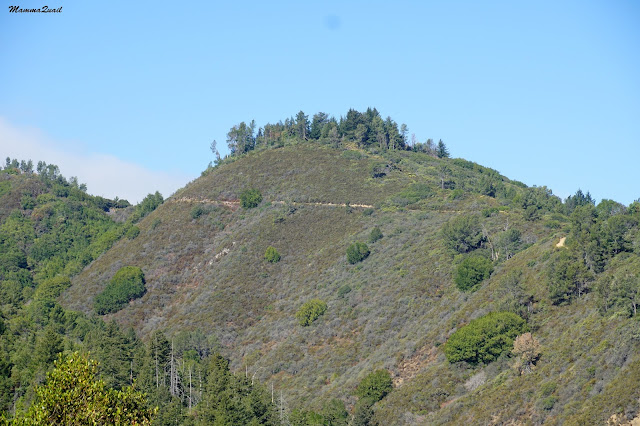 Uvas Canyon County Park is a home to a fascinating forest comprised of rich variety of tree species, not one of them truly dominating the scenery. One of the tree species there is the Douglas Fir, some of which have reached a size that dwarfs even the local redwoods.
The Douglas Fir I saw there were grand and majestic. On a closer look, however, I saw that many of them were unhappy, oozing resin from in ample quantity. This is a likely response to a wood-boring beetle attack. 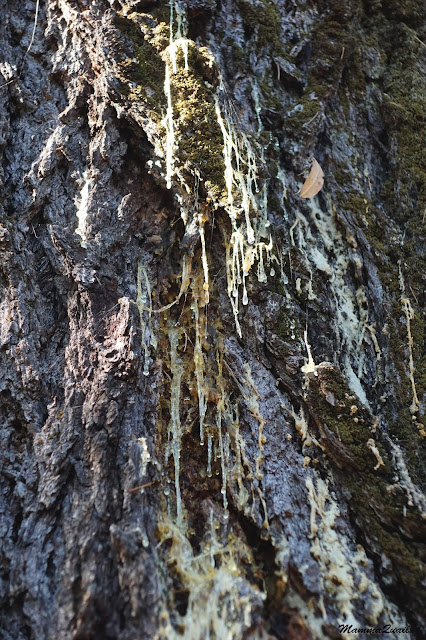 The Contour Trail provides plenty of opportunities to see and feel the infinite aspects of Nature. One only needs to look. I chanced to look down at the base of one large laurel trunk, therefore I saw this beautiful moth sitting motionless o n the ground. 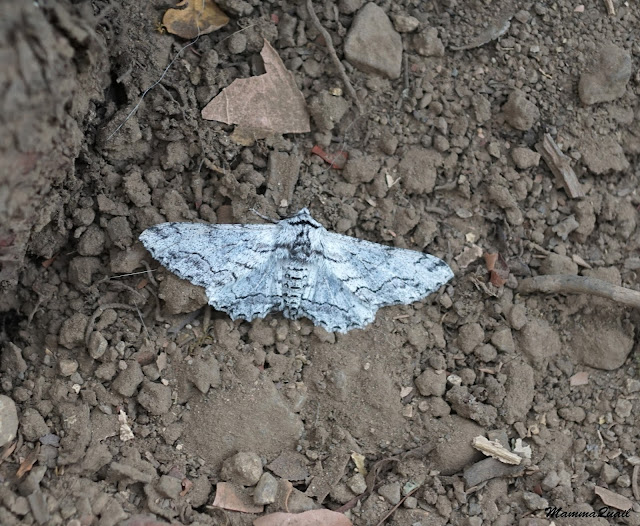 On one of the curves the trail dips shortly into a dry wash. A few undergrowth greens were hanging from the rocks, all very similar.
I assume there is an evolutionary advantage to having sprawled, pinnate leaves when growing under dark tree canopies.
Right at the wash's corner I had my first sighting of water on that hike: a tiny puddle surrounded by mud. That puddle was there every time I was there throughout October: it is an active spring that's too week to flow beyond that puddle area. 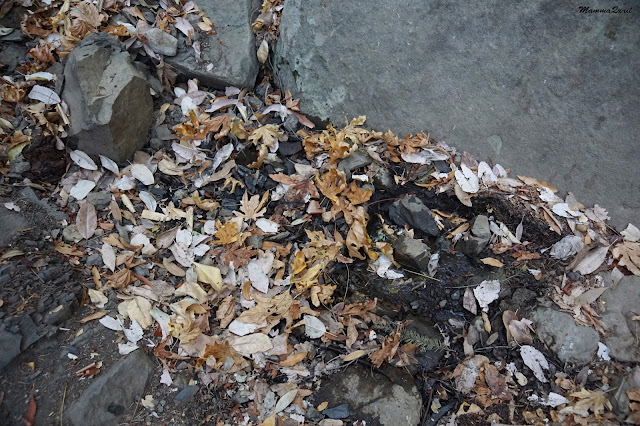 Almost every park in the Bay Area has poison oak growing near the trails and Uvas Canyon is no different. There is, however, much less poison oak there than in other parks with similar vegetation communities. The examples of poison oak I've seen along the Contour Trail were hardly impressive.
What was very impressive to me were the large numbers of pacific madrone trees I've seen there. I'm used to seeing its red back standing out here and there in Bay Area forests. In Uvas Canyon CP, however, there are lots and lots of madrone trees, their shiny, rust-colored back adding a special character to the forest.
I usually look at oak trees for artistic inspiration. But Uvas Canyon's madrone trees display some unique personalities as well.
There were absolutely no flowers blooming anywhere along my trail. I still looked down, though, and found other interesting sights, also morbid ones.
After a mile and some, the Contour Trail meets Swanson Creek. At the meeting point, the creek was completely dry. 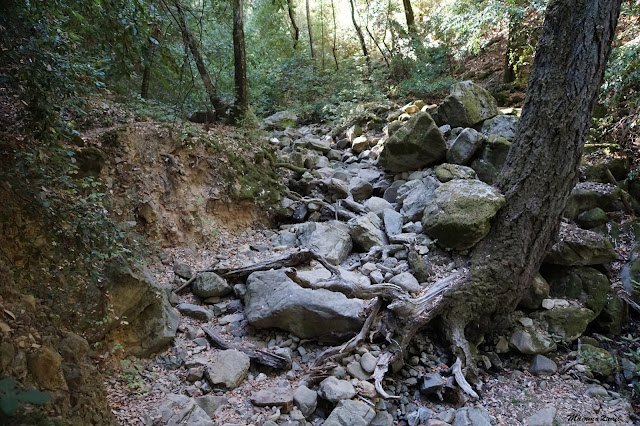 A few yards below, however, the water was flowing openly on the surface. Not a big flow, but for 4 straight years of drought, it was nice to see the creek running. 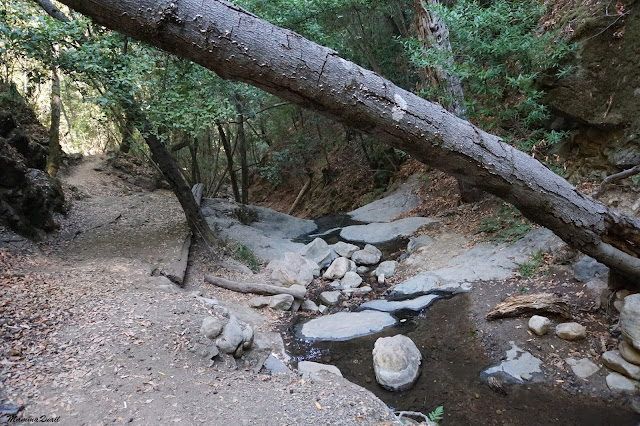 The trail continues on the other side of the creek. There's no bridge there, just a few large rocks to hop on. On high flow times, the trail is closed to hikers.
A third more mile down and I was at the Upper Falls. Finally, a waterfall that flows.

Upper Falls is the best place to stop and relax. The sound of running waterer, so rare here these days, has a wonderful effect on the mind.
From there on, the trail follows the creek downstream. About 50 yards below the falls the trail splits into two: the left is a wide dirt road that stretches high above the water. It is wide and comfortable, sunlit in more than one place, and the perfect trail to take if seeing reptiles is on the agenda.
I saw a ring-necked snake on that trail too, but it slithered away too quickly as I lifted my camera. The alligator lizard, however, stayed put so motionlessly that I wondered if to was dead. (It wasn't.)

But up near the Upper Falls where the trail splits, the right choice takes close to the water. It is a narrow trail that crosses the creek a few times on narrow wood bridges. Narrow, shaded and uneven, and wilder. 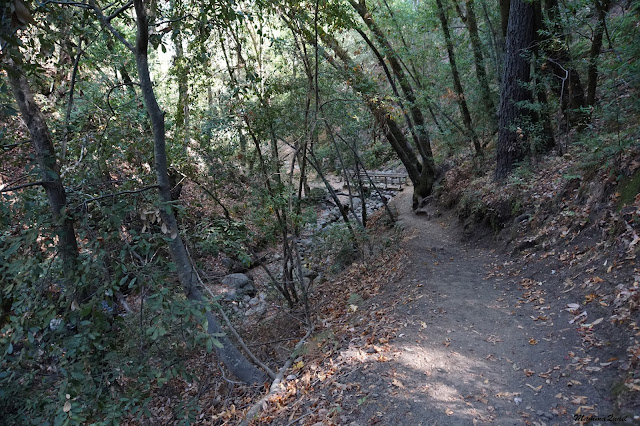 I didn't see any reptiles out on that trail. There was plenty of vegetation, however. Including the nicest specimen of poison oak I've seen at the park.
That trail runs much closer to the water and provides wonderful opportunities to appreciate the little cascades and the tiny ripping pools the create. 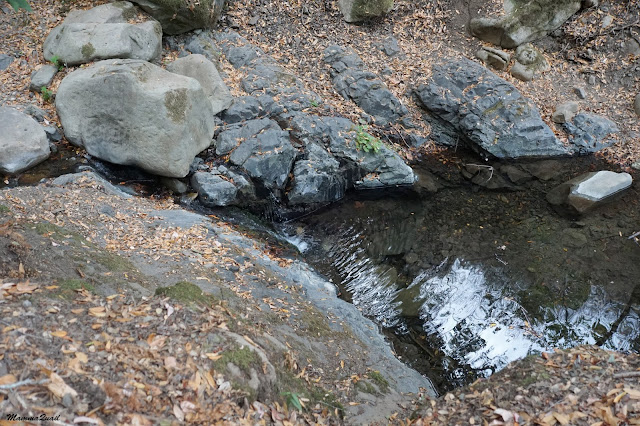 Both these trails form the two arms of the Waterfall Loop. They meet again and reunite a quarter of a mile downstream at the old, broken dam. 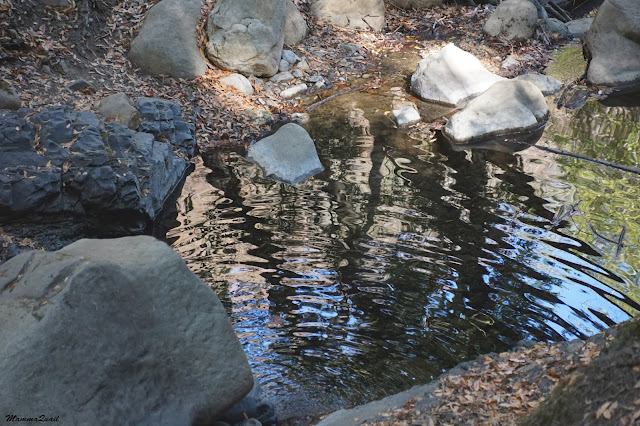 Uvas Canyon is one of the few places around the Bay Area where the creek still runs after the 4 long drought years. It is a wonderful place to visit any time of year, but makes a particularly good hike in the fall time, where everywhere else is hot and dry. I was amazed by how rich this park is. The diversity, the wildlife encounters, and the strong sense of wilderness, so close to San Jose's urban conglomerate, yet so distant in every other way. Uvas Canyon County Park is the perfect getaway for those who want to reconnect with Nature, and with themselves.

Many thanks to members of the California Native Plants Society for their help in identifying the coffeeberry and the droppings :-)