Last June I visited Lassen Volcanic National Park to prepare for the camping trip that I planned for the following month. I was by myself but by no means alone: the park was alive with wildflowers, and the wild animals were all out and about, enjoying the early summer.
On the first day of my visit I hiked to Kings Creek Falls and Sifford Lake. It was early enough still when I finished my hike, so I decided to stop at the Loomis Visitor Center and hike around Lily Pond.

I saw several deer on my way. This one, however, made me stop. Then he walked slowly and very princely to the edge of the road and waited patiently until I took his photo. Then he walked away and I continued driving to the visitor center.

After a nice chat with the naturalist at the visitor center from whom I learned about the planned closure of Kings Creek Falls access trail for the summer, I took on the Lily Pond trail. 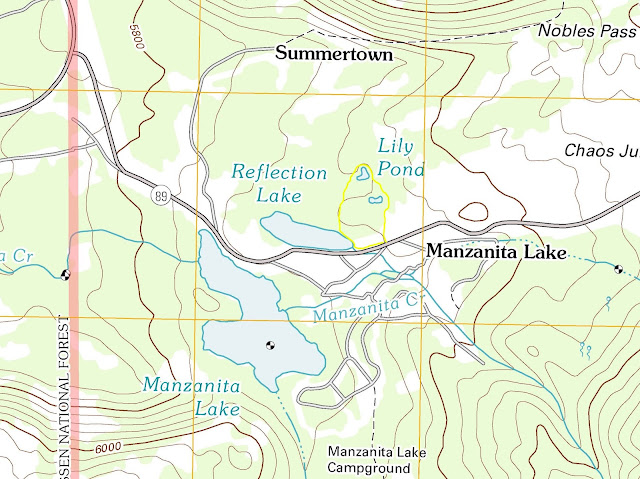 The trail begins across the road from the Loomis Visitor Center, and almost immediately disappears into an open forest of small lodgepole pines.
The trees are far enough apart that the sunshine illuminates directly much of the forest floor. There isn't much of an undergrowth in this forest. There were plenty of lizards, though, basking in the afternoon sun on top of exposed rocks.
There are two ponds marked on the map, and promptly I arrived at the first one, in which there were no lilies, just tall, green grass. That pond looked well on its way of transforming into a meadow. 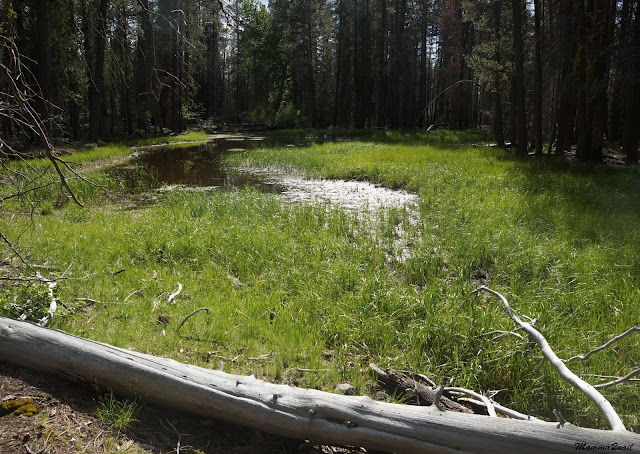 Only a bit further, though, I arrived at Lily Pond, which indeed was covered with pond-lilies, many of them in bloom.
The water was very calm and very dark. It reflected perfectly the trees overhead. 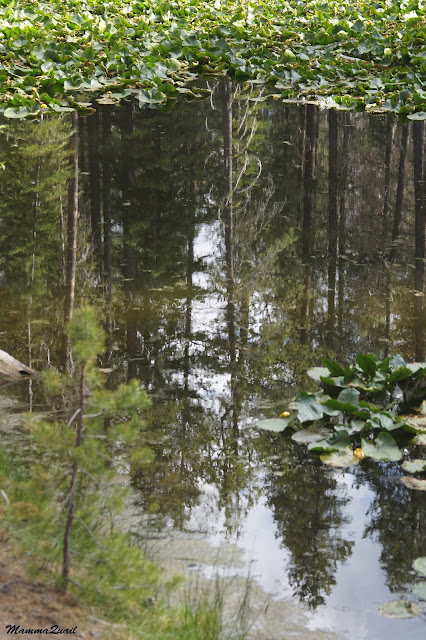 I started circumventing the pond, walking slowly. Movement in the large lily leaves caught my attention: a couple of mallards were rippling the water between the plants. The male was out in the open and eyed me cautiously. The female was well camouflaged under the large leaves.
The trail got nearer the water and I had better view of the pretty flowers. Not flashy like garden ponds water lilies, but delicate and shy, not widely open, and very pretty.
The pond isn't big. Although I walked very slow I was around it in a short time. Soon I left it behind me and continued through the forest.
Under the lodgepole pines: the snow plant candlesticks burning red.
Small birds were hopping between branches. When they stood long enough I identified them as chickadees. Then one of them dropped to the creek to take a bath.
It was a very leisurely hike. I walked slow, imbibing all the sights, sounds and fragrances. More trees, more birds, another clearing carpeted with new spring grass. 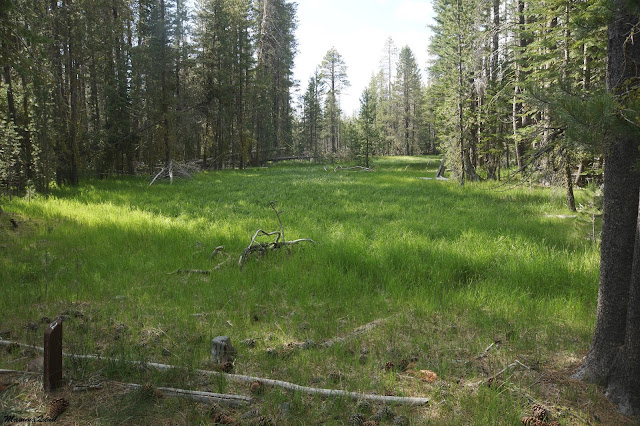 Lily Pond trail connects with Reflection Lake loop trail. At first I thought I'll hike both loops on th same hike but as I approached the trail intersection I decided to use the rest of the afternoon for better exploring the Hat Creek campground area where I was staying. I headed directly back to the visitor center, stopping briefly to say good evening to the cute squirrel that agreed to pose for a second and get photographed. 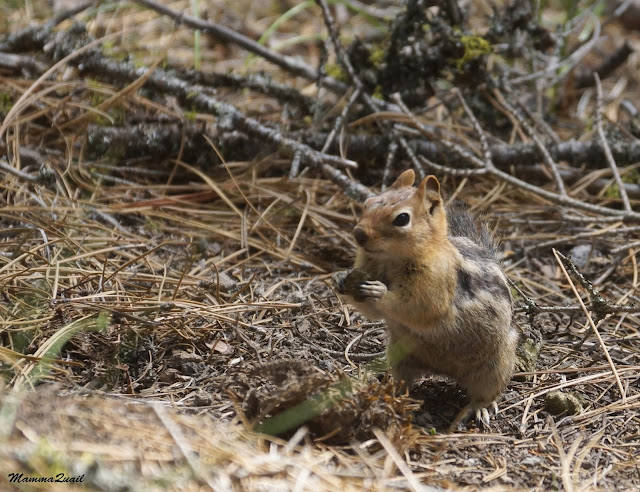 Lily Pond is also an interpretive trail with make signs and a brochure with explanations to match. It is short, easy and very interesting - the perfect hike for anyone but particularly suitable for little children.

I went back to the campground and called it the day. I would hike around Reflection Lake on the morrow, before going on to Mill Creek Falls.