From Fall to Winter: Seasons Transition at the Morgan Territory Regional Preserve

A couple of years back a friend recommended to me the Morgan Territory Regional Preserve. Last November I finally made it there, and immediately regretted not having gone there before. On the following month I took the Redwood 4H Hiking Project there as well. The photos in this post were taken on both hikes.
Getting to the Morgan Territory, just a few miles north of Livermore, is a bit of a challenge. Morgan Territory Road is a single lane, two-way traffic road, winding and with no shoulder to pull over to. Needless to say one must drive there very slowly and very carefully. Too bad not everyone who uses that road seems to think so, and a couple of close calls have left me quite shaky on both days I hiked there.
The Highland Ridge trailhead is a couple of miles up the road from the park's headquarters. There is a small pullout there where I parked my car, and a gate, behind which is the trail: a packed dirt road.
My November hike took place 3 days after a decent rain storm. There were plenty of evidence for it other than the muddy trail.
Freshly dug anthills dotted the trail and I was careful not to trample them. The ants must have done all the work earlier and were sleeping because there was not a single ant to be seen above ground. 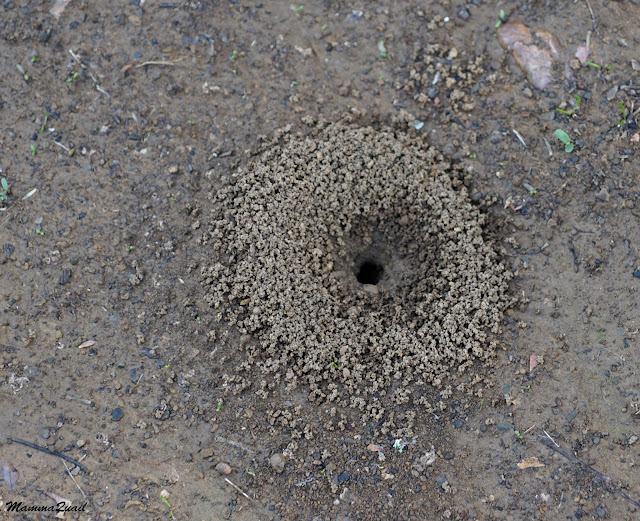 The damp ground is a public message board where every passer-by leaves its notes. Apparently I was the first one to hike that trail after the rain. Other human tracks were nearly erased. The second hike had taken place even sooner after the rain but it was on a weekend - several hikers and dog walkers have already gone by, leaving fresh marks into the earth.
On the firs hike I found some canine paw prints. They were small, unaccompanied by human tracks and were visible on one spot on the trail only. A wild canine, possibly a fox.

In November most deciduous oaks still wore their foliage. The buckeye trees, however, were already bare, wearing nothing but their large nut-like fruits.

By December the valley oaks had joined the buckeye in winter hibernation. The only green trees left were the live oaks and the laurels.
After about a quarter mile the trail leaves the creek and goes uphill. It is a steady, mostly gentle south-facing slope with very few trees to obscure the view. The rolling East Bay hills are visible from that trail, beautiful and soul-soothing.
From several places on that trail Mt. Diablo comes into view. Tuyshtak - this mountain's name in Bay Miwok language, is the most prominent mountain in the Bay Area, standing out even more than the slightly higher Mt. Hamilton. It is regarded by the area's Native Americans as the place where the world's creation was initiated.
Signs of early winter: seedlings in the cracks. 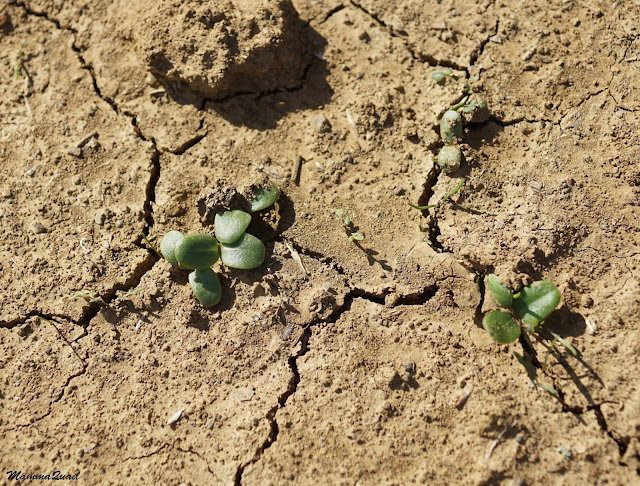 More tracks on the trail. Too small to be cattle. Associated diggings. Feral hogs, mort likely. 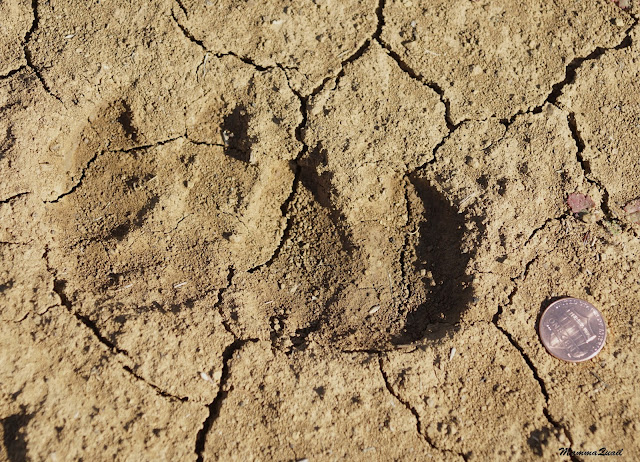 At the top the Highland Ridge Trail intersects with the Eagle Trail, and I turned right (south). Just a few yards ahead, there is a 0.6 mile dead-end trail spur, the Hog Creek Trail. On my first hike there in November, I went down that trail.

Hog Creek Trail is shaded throughout. Laurels and oaks, and an occasional buckeye hid my from the sun. I got a good close-up of the laurel fruit, and I ate a few of them. Laurel fruit have very little flesh and their taste is mildly bitter but not unpleasant. The nuts can be roasted and ground to make a coffee-like drink. One day I'll try that.
There were much fewer mushrooms than I expected to see, after the rains the area had received by then. Still, there were a few. The most impressive one, however, was a huge polyporous mushroom  hung off an oak's limb stump. 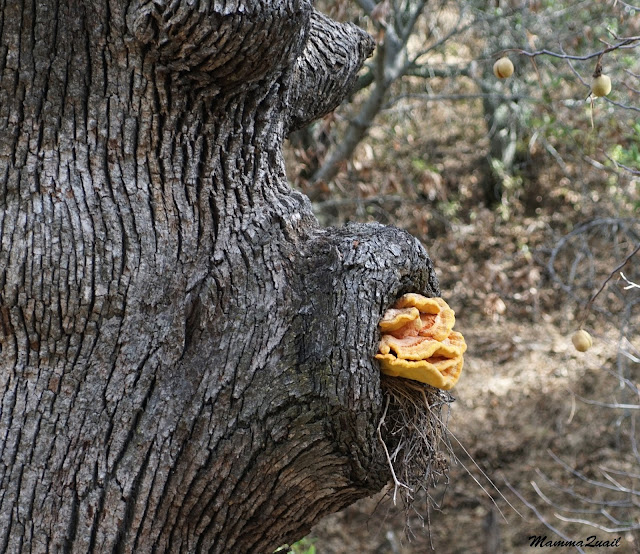 On the trail below: fallen oak leaves. And not all of them senesced. Some were downed by galls - that's what those reddish puff-balls are, attached to the bottom of the leaves.
An engine noise, so unfitting the scenery, was approaching me. Until then I was completely alone on the trail and the sound alarmed me. It was a park ranger on a small vehicle that emitted really stinky fumes (was it fueled by garbage, perhaps?) The ranger stopped and asked how I was doing, I said I was fine, and he went on past me and disappeared behind a curve. That ranger was the only human being I've seen on the entire hike that day.
Before long I was at the end of Hog Creek Trail. The dirt road continues (unmaintained) but the passage is blocked by a fence and a trespassing warning sign. I turned around and started back up the creek.
I usually try to hike loop trails, but going back and forth has its values too. Some things look better from the opposite direction. Some only become visible on the way back.
I rejoined Eagle Creek and continued on south.
Later, on my 4H December hike, I showed the children the oak galls on the fallen leaves that littered the ground. Some were not yet fluffed and they looked like pretty little stars.
It's a short segment of the Eagle Trail which connects the Highland Ridge Trail with the Stone Corral Trail. This short segment has some lovely views. 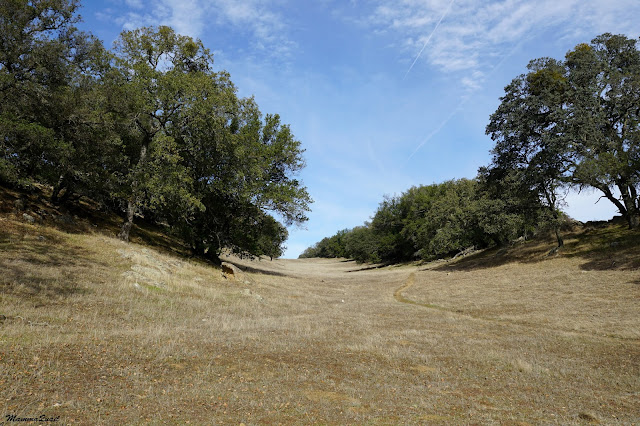 Approaching the trail intersection, Eagle Trail straddles a narrow pass between tow low hills where the rocks bulge out of the top soil and weathered into beautiful shapes and decorated with colorful lichen.  A water basin for cattle is near the trail, and fresh tracks and droppings, but no cattle. 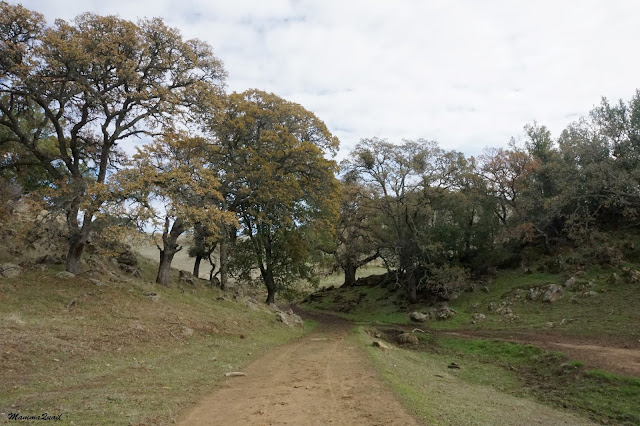 Just as I turned onto Stone Corral Trail, however, I saw them. On the right - a large cow. Next to the post on the left - small calf that couldn't have been more than 2 days old. Between them - the trail.
So what of it? I have run into all kinds of wild and domesticated life on my hikes. I even came face to face with a mountain lion once. But the only time I experienced outright hostility from an animal was on a hike in Sunol Regional Park and the threat came from a mother cow.
I slowed down. Neither calf nor mother budged, both looked at me warily. I turned my back to the calf constantly maintaining eye contact with the mother cow and I walked slowly down the path, talking softly and calmly to the cow, assuring her that I mean no harm to her baby. The cow had her gaze fixed on me the entire time, but didn't make any threatening moves. When I finally passed the unmarked line connecting mother and baby I heard the calf running quickly behind my back, joining his mother. I believe all three of us sighed with relief. 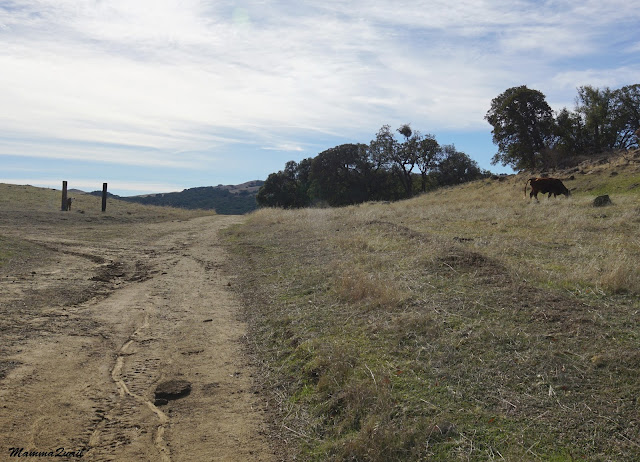 On my second hike there, the cow and calf where nowhere to be seen. Neither was the November craw atop the dead tree. 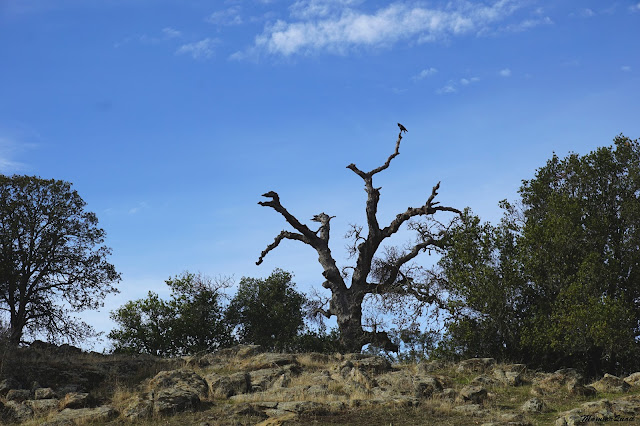 There were plenty of fresh signs that cattle have been there recently, and older deposits too. I probably wouldn't have posted this photo if not for the nice germination it shows. Cow pies and other species feces make perfect nurseries for baby plants.
It was cold on my November hike and the air was crisp and clear. Although there was new germination everywhere, the sprouts were yet too small to be seen from underneath the mantle of dry sumer weeds, and the hills were wearing their summery yellow still, making a wonderful background for the dark-green live oaks. 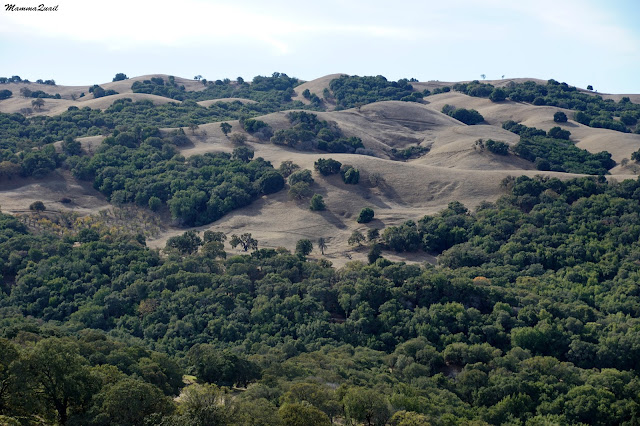 By December the hills had darkened. Not quite green yet, but the transition was visible. And in the blades of new grass - a buzzing surprise - a rain beetle. The children had a lot of fun watching the beetle taking off and flying a few feet and fling down to the earth only to fly again yet another 2-3 feet.
The oak trees of the East Bay are something else. They stand out in their gnarled and twisted personalities and their dark, overshadowing presence. And then there are the funny-looking ones.
On the December hike , as we were walking down the Ston Corral Trail, one of the children pointed and exclaimed, "What a huge cow!"
I looked through my binoculars and corrected the gender.
He wondered aloud how I knew that, and argued back that the horns were too short for it to be male. A discussion ensued after which the children learned to tell a cow from a bull and a bull from a steer.
As we approached the bull another child got concerned about the red sweatshirt she was wearing. Now it was time to dispel some myths about bulls too.

The 4H Youth Development Program is truly a wonderful setting in which children do learn about the natural world around them.
We passed the bull peacefully. He lifted his head and followed us with his gaze, and nothing else.
On we went, and soon we came upon a round depression in a rock. A man-made hole, most likely an Indian grinding stone - a stone mortar where the Native Americans used to grind the acorns to a meal.
The Stone Corral Trail drops back into the forest and continues along the creek. Despite recent rains, the creek was still dry. 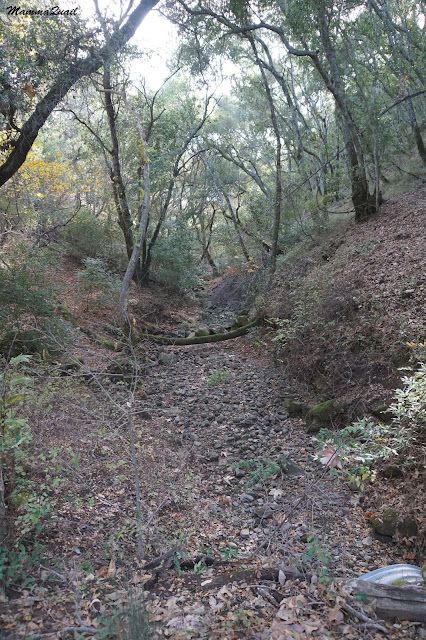 Every winter I run into aggregates of ladybugs. They cling together when weather is suboptimal for them I guess it was just too cold.
Eventually the Stone Corral Trail reconnects with the Highland Ridge Trail. From there. it is a shot walk back to the trailhead.
Morgan Territory Regional Preserve is a fairly recent discovery for me. This park captures the signature sights of the East Bay, and lends a great sense of vastness, not easily achieved in a populated region as the Bay Area. It is also pretty high up in altitude (Bay Area scale, of course), which enhances the sense of wilderness that is so precious for avid nature hikers. There are many more trails in that park. This post is just the beginning. 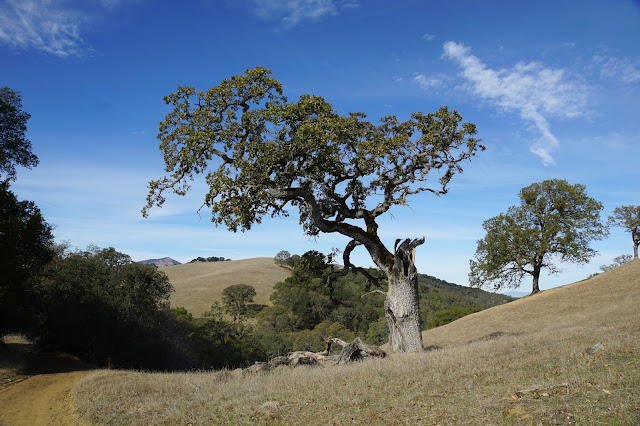