Point Reyes National Seashore offers some of the best coastal views in California. It was a prime area to take my visiting friend to, to show her the beauty of the Pacific Coast. Hiking to the Alamere Falls has been on my mind for a while, and now I had and excellent opportunity to go there. Papa Quail had arranged to be home and take care of the chikas, enabling me and my friend to have a full day for that hike.

We arrived at the trailhead a bit later than planned, and after an all too relaxed breakfast we started our hike.
In its beginning, the trail cuts through an impressive eucalyptus grove. These trees were introduced from Australia to provide quick-growing lumber. While they never became main lumber in California, they did, however, spread all over the northern coastal areas. For better or worse, eucalyptus are now a prominent part of the California coastal habitat. 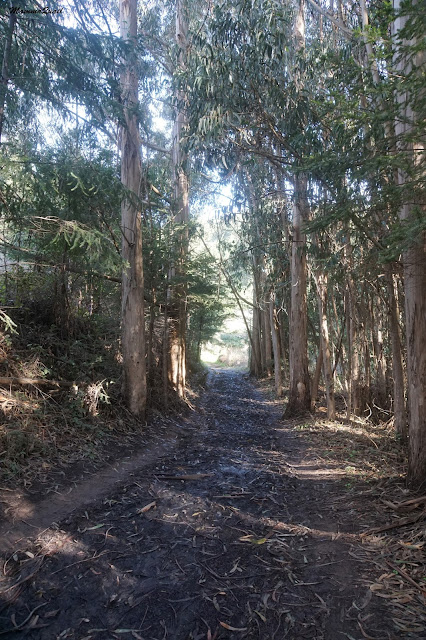 This eucalyptus grove had been around for a long while. Long enough to produce some nice-looking giants (on a eucalyptus scale).
Not very far down the trail I saw the first bloom: a flowering currant shrub. It is so beautiful I was sure at first I saw a runaway cultivar. It is, however, a wild California native plant and a proof that wild plants do not need any 'betterment'.
For the first mile the trail stretches along the ocean cliffs. Once out of the eucalyptus grove the view opens up and the magnificent coastline unravels. 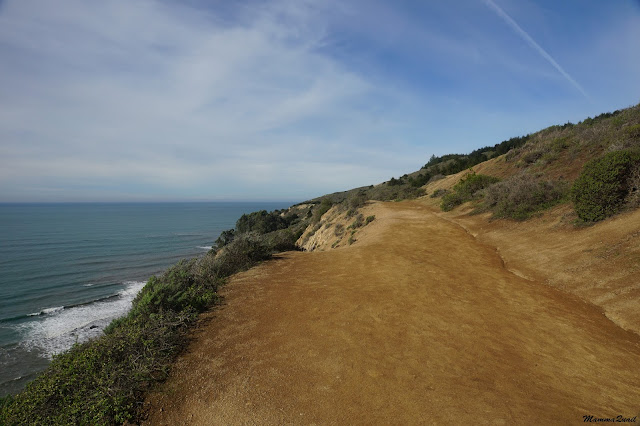 The Point Reyes peninsula slants to the west. We walked along the southern coastline and when I turned to look behind me, I was facing the mid-day sun as it hanged right above the ocean, shining off the sea surface. 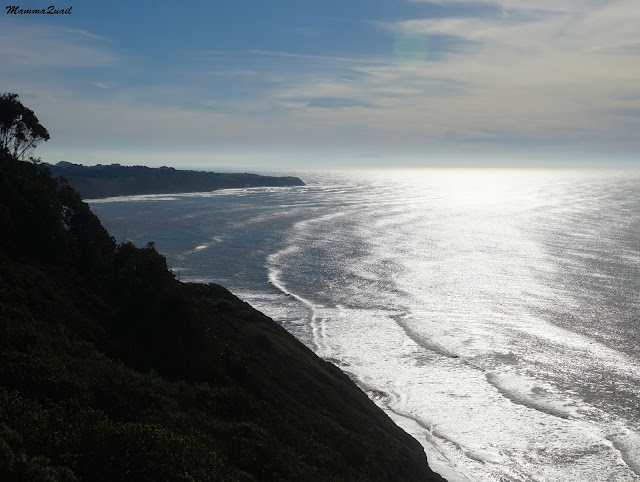 We couldn't have had a better day for the hike: the weather was perfect and everything was lush and clean after the rains earlier that week. 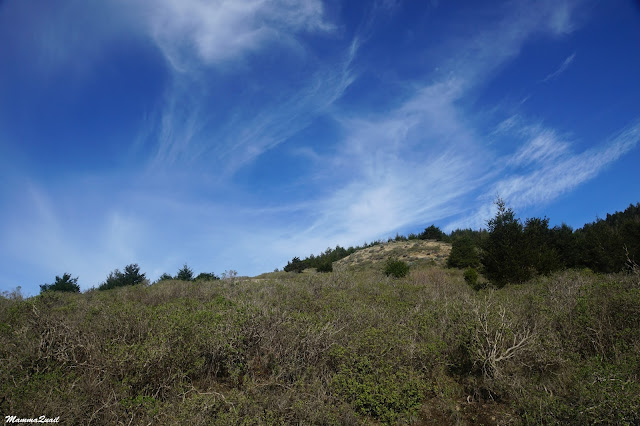 After about a mile the trail leaves the coast cliffs and turns inland and uphill to bypass some deep canyon creeks and lakes. As we went up the vegetation closed in around us, and the heavy scent of forest earth filled the air.
I didn't have to look too hard for the mushrooms: they were there. Large and small, emerging, full grown, and in decay. And always beautiful to see.
But there weren't many of them. At least, not as many as I've seen last winter in similar places. Last winter was a fabulous year for mushrooms. That winter had started with a bang after 3 years of drought (and sadly stopped short to continue the drought a forth year), and the fungi responded forcefully and bloomed all over the place. It seemed like they gave it all they got before the rains had ceased, then remained thirsty for the rest of that winter. Too thirsty to build enough hyphae too bloom strong this winter too.

Naturally, I looked for the iconic flay agaric mushroom. There were a few, here and there, but only one that was nice and whole. And even that one was knocked over by something before I saw it.
The trail meanders in and out of forested areas and crosses some creeks that at the time of our hike were running high. On parts, the water was running right on the trail.
Groves of willow and sycamore marked the creek beds, all in their winter-wear, nicely contrasted with the bright green of adjacent new herbaceous growth. 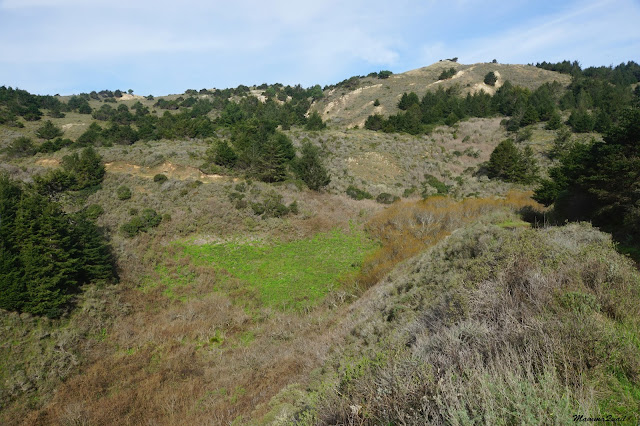 Halfway uphill the trail split and we continued left, westward. Immediately after the turn we saw a few small ponds left of the trail. One of them was particularly interesting: it was completely covered with pond vegetation. It looked almost as if we could walk on it. (We didn't). We were inticed to come over and take a closer look. There were newts in the shallows too, but they swam away as we approached.
Nearly all the conifers we saw there were Douglas Fir. This species can reach enormous size, but the trees facing the coast were humble. 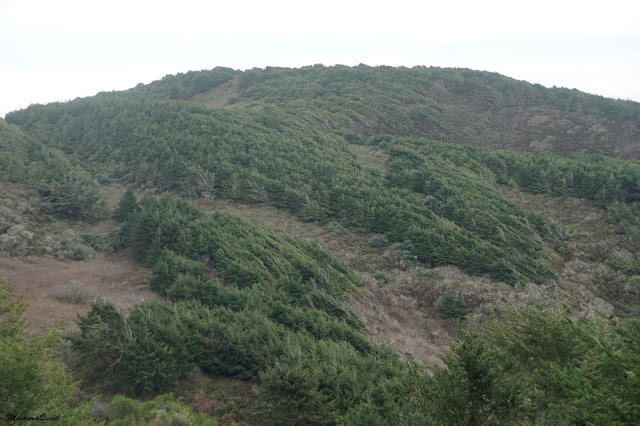 We went on and eventually reached another, much larger lake: Bass Lake. The lake was far below the trail, and had we not started the hike too late we might have gone down to see it closer too. As it was, we remained on the trail above and appreciated its beauty from afar. 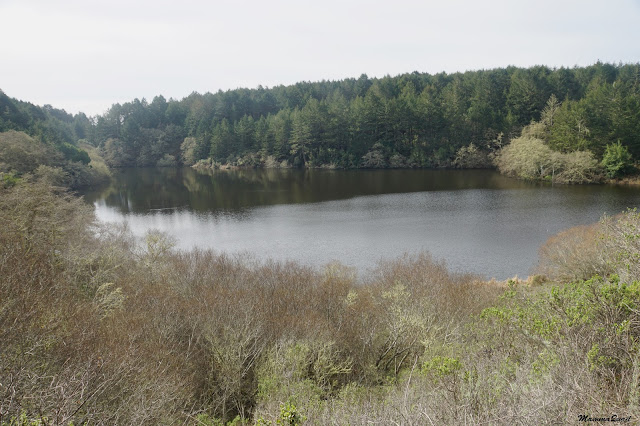 I noticed some movement in the water and looked through my binoculars. A few bufflehead ducks were swimming here and there, occasionally diving underwater. I changed to the high zoom lens but they were pretty far down. A male bufflehead, however, fits very nicely in the ripply background of the lake surface.
Willows hemmed the lake all around, all bare, sleeping away the winter.
We went on and entered a grove of thin Douglas Fir with bare lower branches standing in a thick carpet of fern. 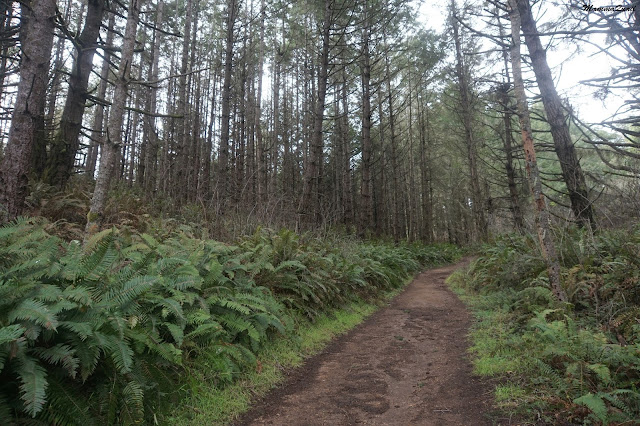 The fern too are recovering from the harsh drought. New shoots were rolling out, delicate and tender, adding new fern leaves to the forest undergrowth carpet. 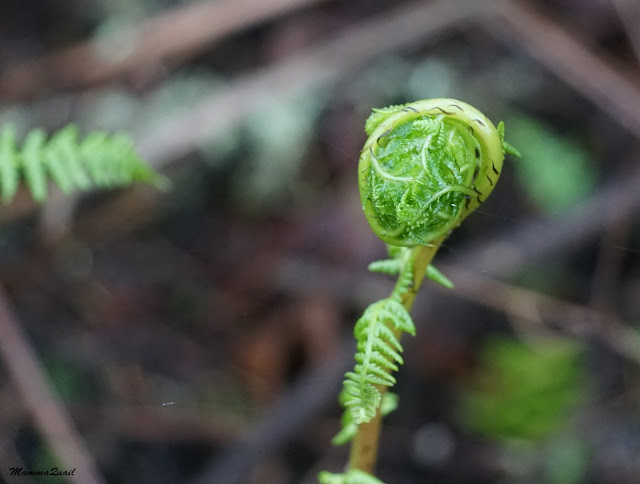 The abundant moisture brought out the resident mollusks: the banana slugs. My visiting friend was duly impressed with their size but all the slugs we've seen there that day looked 'unripe', without the signature bright yellow color. (We've seen those later at Henry Cowell Redwoods SP).
As we neared the turn to Alamere Falls we came across some people who were coming back from visiting there. All of them warned us about the trail condition and suggested that we go down only to the overlook point. When we probed further, however, they all admitted to have climbed down all the way to the beach.
We nearly missed the trail turn leading to the falls. It looks like a narrow gap in thick vegetation and is marked with a sign saying 'Unmaintained Trail". The part of the sign that says "Alamere Falls" was painted over by graffiti. A nice fellow hiker we met there confirmed that that was indeed the turn we needed to take to get to the falls, and he too warn us about the poor trail condition.
We made it to the overlook first, and the view was spectacular.
Directly below we could see the train of the falls reaching the ocean, but there was no view of the falls. For that we had to climb down the cliff.
The way down is heavily eroded. The first part goes through a narrow chute of sandstone and thick, crumbling topsoil mud. Skid marks were evidence that not everyone that went down before us made it on their feet. We used hiking poles, which helped us keep our behinds clean.
Half way down there is a lovely view of the Alamere Creek as it cascades down with cheerful noise of intensely running water. The flow was nice and high and we were facing the next challenge: crossing that creek to get to the second part of the trail down.
Basically, there are two ways of doing that. Hopping across or wading through. My friend hopped with ease. I duly took off my shoes, rolled up my pants, and waded through.
At this point I must add that entering a fast running creek atop a waterfall isn't the smartest of things to do. Many fatalities were caused by poor decision taking at such places. The risk of crossing the Alamere Creek at that point was not high for me but I would strongly recommend not to let young children enter the water there on times the creek runs high. Better to carry them across.
Climbing that last bit did get me down on my behind. It's hard rock, but flaking and crumbling with lots of sharp shards. Young children would need assistance getting down (and up) there.
And in the end - there's the beach. And the most beautiful waterfall in the larger Bay Area.
Alamere Falls is a tide fall - a waterfall that drops directly to the ocean beach. There are very few such falls in the world, two of which are in California. (The other one is McWay Falls at Julia Pfeiffer Burns State Park). Alamere Falls is a wonderful sight to see.
There were quite a few people there and it was challenging to take a photo of the falls without other humans in the frame.
A nice person too a photo of my friend and me with the Alamere Falls. Then we took our shoes off and waded across the creek to the south side where we sat for lunch. We sat near the cliff but had to change our spot quickly: stones kept falling down the cliff on us and we weren't about to wait for the big one to fall on our heads.
The cliffs are made of sediment rocks. The layers vary in thickness and color. I observed it most closely as I was wiping the sand from my feet and putting on my shoes, getting ready to climb up the trail.
By 3:30 the sun had disappeared behind new clouds and the wind picked up. We chilled from sitting too long and were ready to get moving again. We were advised earlier to hike on the beach 1.3 miles north to Wildcat Campground and pick up the coastal trail there, but we feared of getting caught by the incoming tide. We had to face the cliff again.
Climbing back up proved considerably easier than going down. By the time we were up the Coastal/Palomarin trail we had about an hour of daylight left and 4 miles to go. We needed to hurry.
I promised not to stop for anything since we were going back on the same trail anyway, but the same trail can provide new sights even a couple of hours later.

On our way back we met many newts on the trail. Mainly in the puddles, but quite a few were wondering around. They were all very small, much smaller than newts I've seen before in other places. I think they might be young ones looking for a place to settle down, but they could be a local strain too, I'm not sure.
None of the newts seemed all too active. They just sat there while we circled around and took photos.
We couldn't appreciate these pretty amphibians for too long. We rushed down the trail, chasing the quickly fading sun rays.
The late afternoon light was more than enough out in the open. Under the trees, however, nighttime was already setting in.
The sun was no longer hanging in the south. In fact, by the time we were back to the point where I took the earlier photo of the southern tip of Point Reyes coast, the sun was completely behind clouds and the ocean sparkled no longer.

We made it back to the parking lot with little day light to spare. One last sunset photo, and we were on our way back home.
Seeing the Alamere Falls has been on my mind for a long time, ever since Papa Quail found out about 'the most beautiful waterfall in the area'. Hiking there, however, was the option always dropped: hiking in and out to the falls is over 8 miles and we are slow walkers, especially with the chikas in tow. Papa Quail had made it possible for me to take the entire day off for this hike. The next time will not be long from now. The next time we'll go there together, with the chikas.


Many thanks to members of the California Native Plants Society for their help in identifying the pond plants!