First time visitors to California usually arrive with some kind of a check list of 'must see' places. Naturally, Yosemite National Park would be on that list. Since my friend arrived without such list I made it for her. And so, two days after she arrived, we were on our way to Yosemite.
We left home about noon time, the day before we planned to be at Yosemite. We had planned to spend the night in the town of Mariposa, so we had plenty of daylight to spare - a perfect opportunity to visit the San Luis National Wildlife Refuge.
On previous trips we visited the two main units of the refuge: the San Luis and Merced units. This time we stopped at San Joaquin River unit.

This NWR is well hidden between fields and orchards. Only an inconspicuous brown sign tells its presence. Good thing we pulled the coordinates ahead of time. We were delayed on our way there by an envoy of sandhill cranes that waited for us in the field right outside the refuge's entrance. No complaints here!
A packed gravel parking lot surrounded by high bushes didn't reveal much of what was there to see. Little bush birds chirped everywhere. Sparrows, mostly. I saw a family of quail behind the bushes but when they saw us they immediately flew away.

After convincing the chikas that this isn't going to be a long trail the stopped protesting and we started our hike.
There is a single trail in the SJRNWR, and it is a hiking trail, comprised of three connected loops. We could have hiked just one or two of the loops but ended up hiking all three.
The sky was clouded and heavy moist hang in the air. It was a very wintery scene all around. 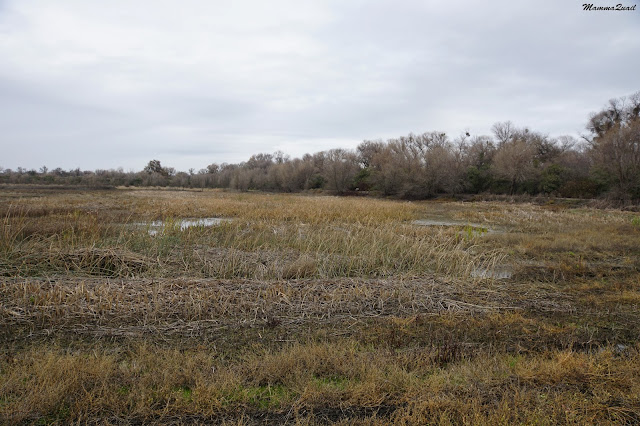 I looked back to the west, where we came from. It looked as if the mountain range we had just crossed was getting soaked. I wondered if we were about to get wet as well. 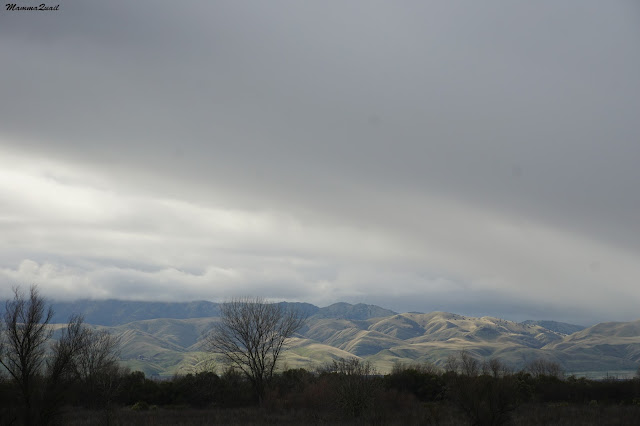 The sight of bare trees can be gloomy, but bare trees make it easier to see the birds. Papa Quail was making the most of it.
While the trees were sleeping off winter the annuals were coming out to play. The bright green of early growth was almost blinding against the backdrop of winter gray. 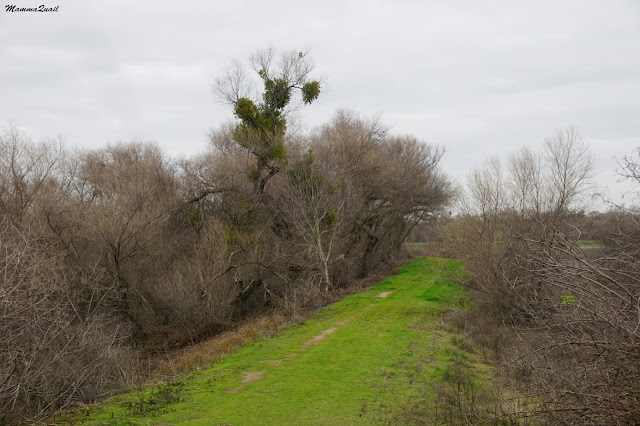 The primary reason for us to visit the SJRNWR was to see birds. In particular, the large flocks of migratory birds that overwinter in the Valley. Most of the trail, however, doesn't go by the water, and other than the cranes before the gate, all the birds we saw were little bush birds, quail (that kept disappearing in the vegetation), and representatives of the raptors patrol.
When we arrived at the river we didn't see any of the large migratory birds there either. They were all in transition - flying high above our heads.
Nearly all the arrowheads we saw in the sky were geese. Mostly snow geese, some white-fronted geese. One flock, however, looked a little different. A closer inspection revealed their identity: these were tundra swans.
We didn't plan to hike the entire trail but only the third loop is close to the river so we hiked that part too. Other than the river view, it wasn't much different in scenery than the previous loops. 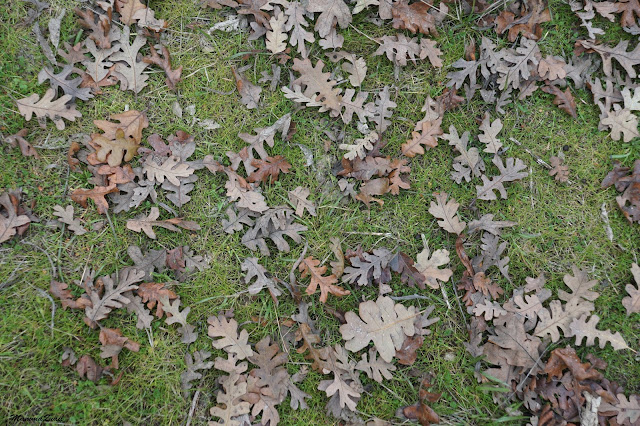 My younger chika got miffed about not sighting as many birds as her older sister. She settled for finding pretty mushrooms on the trail. 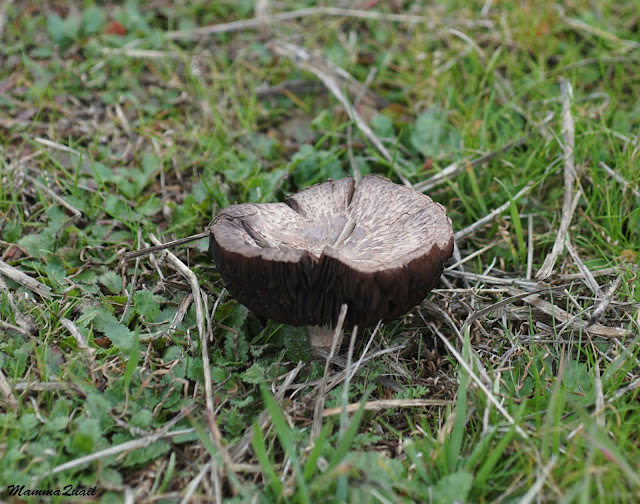 The San Joaquin River is nice and wide. As wide as allowed when most of its tributaries are diverted to agricultural use. 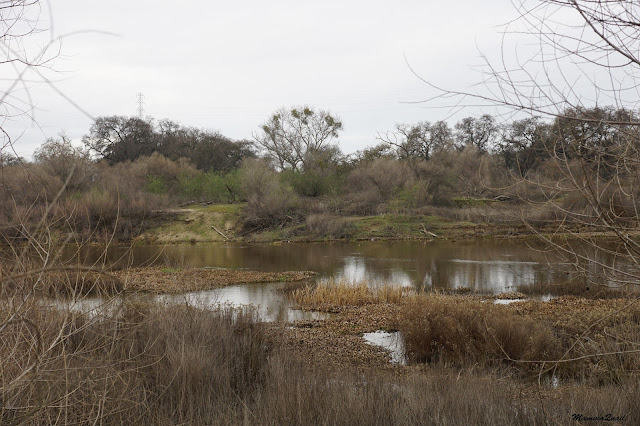 The waterbirds we expected to see there were obviously somewhere else at the time. All we saw were a few coots moving lazily about in patches of dead water hyacinth.
The water hyacinth is an aggressive invader of the Sacramento River Delta. In this case, it was pleasing to see it die off. 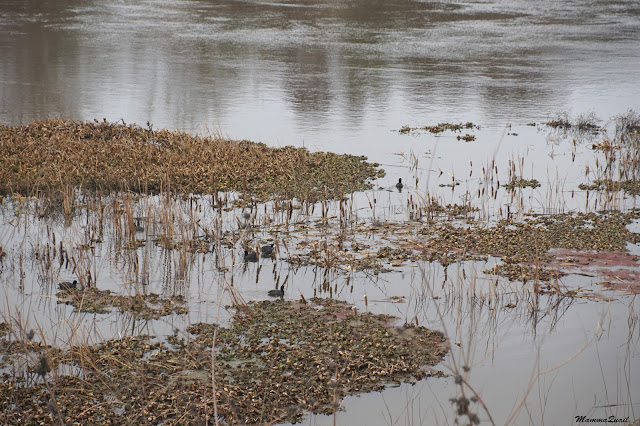 We continued walking along the river until we completed the third loop and turned to go back. Still not seeing much avian life, the hike was now all scenery. 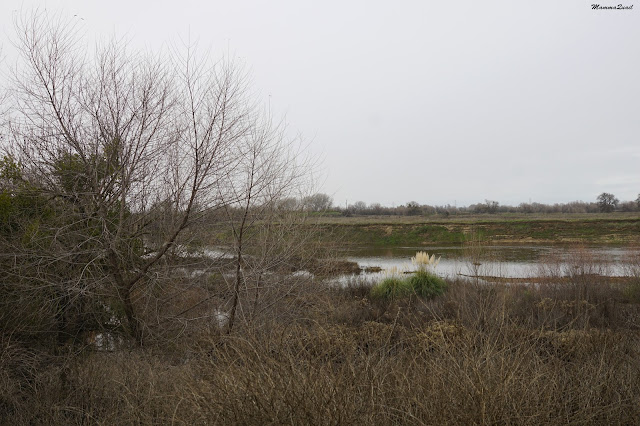 When it comes to scenery, it take special love to admire the winter face of that place when its augmented by a thick cover of clouds that darken the atmosphere.
Just as I was thinking these thoughts the rain begun. It was a soft, thin drizzle, fitting the general glum that hang in the air. It was also enough for me to hide my camera under my sweatshirt and refrain from taking any more photos. 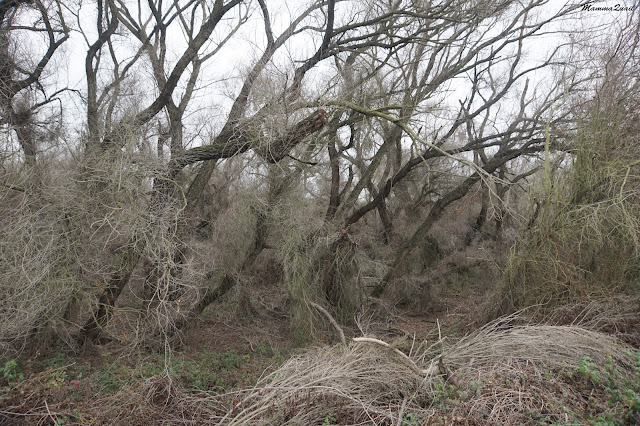 We made it quickly back to the car. By then the rain had subsided and the rabbits were out and about. We looked at them for some time and then called it a day and drove on to Mariposa.

I chose to visit at the San Joaquin unit of San Luis NWR because a few days before I saw some lovely photos of geese and ducks that were taken there and shared on a birding forum. We didn't get to see any of it when we were there. Oh well. We simply have to go back there another time.

But we did see the cranes and that made it all worth the while.