A Different Viewpoint on Familiar Beauty: The North Tufa at Mono lake Park 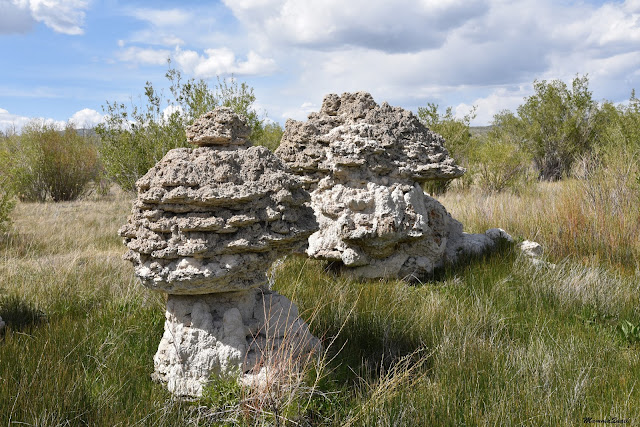 Mono Lake is a regular stopping site for us Quails whenever we make it east of Yosemite. Last May we were visiting the area of Bridgeport with friends and after visiting Bodie State Historic Park we decided to drive a bit more south and see Mono Lake too.
We were coming down on Hwy 395 from the north. Just before descending to the Mono Basin we stopped at a pull out vista point to get a sweeping view of the valley below.
West of the lake lies the town of Lee Vining and the access road to the east entrance of Yosemite National Park. Behind them on the horizon we could see the snow-capped peaks of the Sierra Nevada mountains. 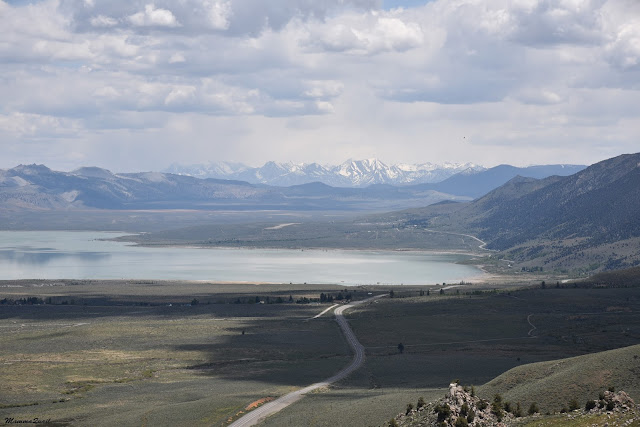 Southeast of Mono Lake we could see another snowy mountain range - the White Mountains that are home to the Ancient Bristlecone Pine Forest. 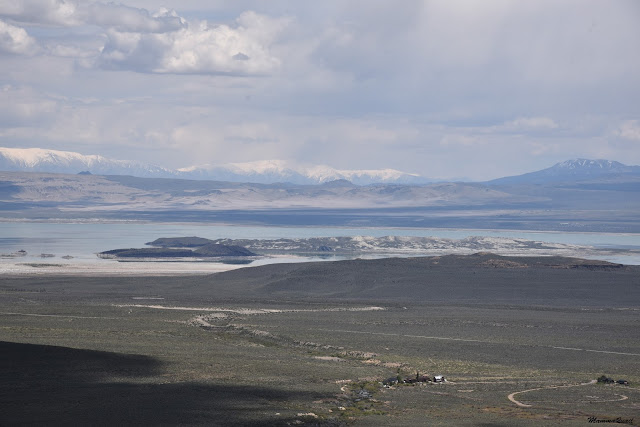 Whenever we visit Mono Lake we go to the south Tufa area, which is the more beautiful side of the lake. This time, however, we decided to take a look at the north side.
Mono Lake Park is a small Lee Vining City Park. There is a community center there, and a lawn with a nice picnic area.
And there is a also a boardwalk that leads south to Mono Lake. So after spending some leisure time on the lawn we took to the boardwalk, ignoring the pleas of the children who wished to remain on the lawn. 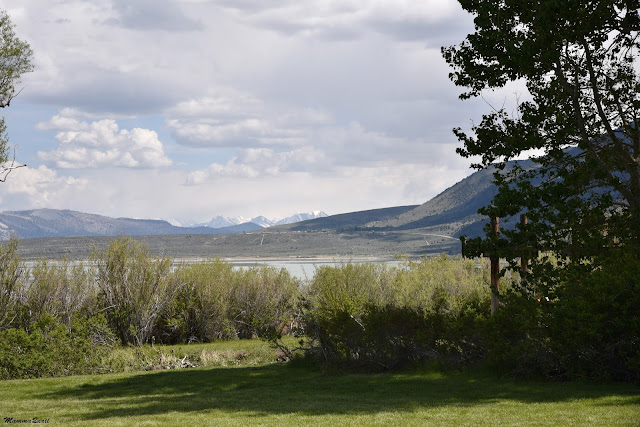 The trail at Mono Lake Park is very short - only about 1/2 a mile long in one direction. The raised boardwalk keeps the fragile terrain and its vegetation safe from people's harm.
The trail goes out between high shrub walls. It was fairly hot there, and the sky was intensely blue overhead. Far to the south there were some clouds, but all and all, to was a perfect hiking weather. 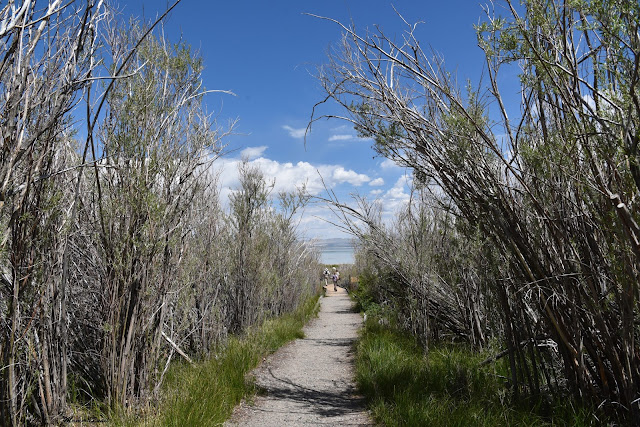 After only a few steps the trail broke out of the bush wall and into an open plain dotted with shrubs. A rabbit hopped between them but vanished quickly out of sight.
The eastern slopes of the Sierra Nevada come Yosemite loomed to our right. From this angle they looked soft and gentle, almost like the western Sierra foothills, only bare of woods. 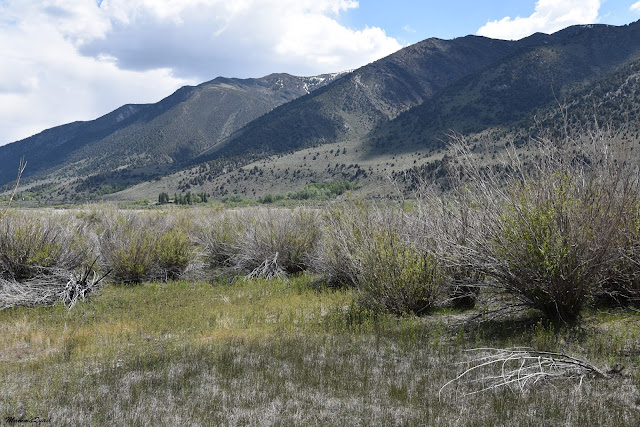 While spring was well on its way all about Bridgeport and Bodie, there was not much to see near Mono Lake in terms of wildflowers. The only bloom I've seen there were a few iris flowers scattered along the boardwalk.
In between the shrub clusters there were the familiar tufa structures - the calcite sediments of the evaporated Mono Lake. 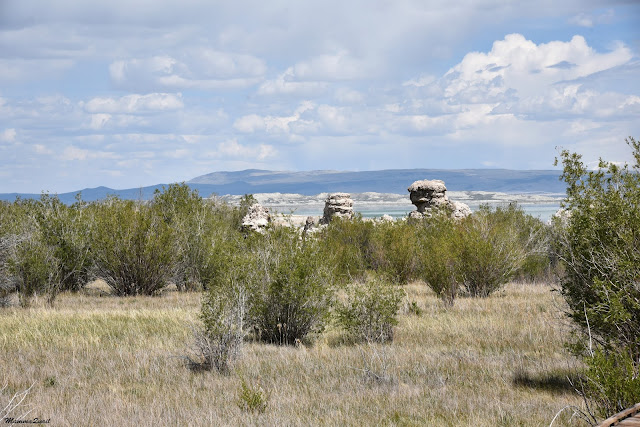 Only decades ago these tufa formations were submerged in water. It was when the city of Los Angeles begun diverting the Eastern Sierra rivers that the lake's level dropped, the water became more saline, and the formations were exposed.
After a long court battle Los Angeles was ordered to stop redirecting water until water levels rise again. The retreat of the lakeshore stopped but didn't yet rise back. The court battle for the Eastern Sierra water rights and the fate of Mono Lake is still going on. I've written about it in a former post about Mono Lake, here. 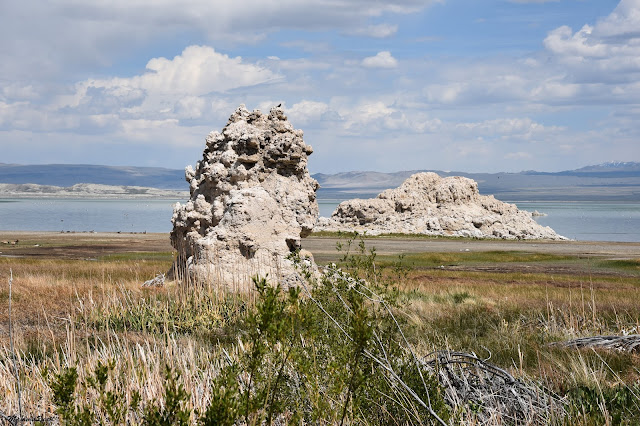 On one of the tufa pillars (picture above) I could see a tiny black dot. With his big zoom lens, Pappa Quail gave this dot a shape - a red-winged blackbird.
(But we could tell it from afar by its distinctive call).
At the top of a tufa island in the water was yet another tiny dot. Other birders how were standing at the observation deck at the end of the boardwalk were trying to figure out what that was. 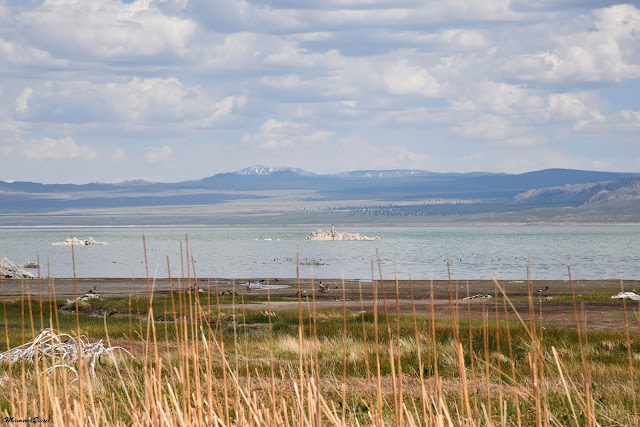 One again, the use of good magnification showed that bird;s identity - an osprey. There are no fish in Mono Lake, so clearly the osprey forage in other water bodies in the area. The Mono Lake tufa, however, is a perfectly safe place for roosting and nesting. We've seen the osprey there pretty much in every visit, so it wasn't a surprise.
As if answering our thoughts, the osprey soon spread its wings and flew off, making a nice circle over us before vanishing.
Mono Lake is a major resting place for migratory birds, and also a nesting place for many birds, primarily gulls who find a safe haven on the lake's island.
Among those who nest there we saw the Canada geese. Several geese families wondered about the low vegetation along the lake's shoreline. They were all mixed together and it wasn't clear to us which goslings belong to which parents. Maybe they raise them communally. I am sure that when people leave the park these geese come to feast on the park's lush lawn :-)
We also had a surprising sighting there: a couple of brants. These geese are normally seen along the ocean only this time of year, and seeing them in Mono Lake is very, very unusual indeed. I might have thought they attached themselves to a flock of Canada geese, but the brants kept to themselves and didn't mingle with the other geese. Perhaps they were lost and landed where they'd seen water.
The entire boardwalk is very short - only half a mile long. After seeing what there was to see at its end we turned and walked back to the managed area of the park. There, on the tall bushes that flanked the trail, there were yellow warblers.

The sky was no longer blue. While we enjoyed the sights of Mono Lake a mass of clouds had crept from the south. We could see scattered rains fall across the plain before us, and it was just a matter of time before we were to get wet.
With some effort we managed to peel the children from the lawn and get them into the cars.


Next time we will visit Mono Lake we'll probably return to the South Tufa area, but it was nice to view the lake from a different angle for a change :-)
Posted by Mamma Quail at 11:38 AM