Mono Lake is a magical place. Seriously. That's why we take every opportunity we get to stop there whenever we travel in the region of the Eastern Sierra. I have already posted here about the story of this lake and of the little loop hike there, and lately I also had the opportunity to visit it's northern shore as well. This post is about that very same trail - but with a very different look and feel.
Last January my good friend came to visit me from overseas and both of us went on a week-long road trip, visiting some of California's prettiest winter-accessible places, and Mono Lake was on our must see list.
We were drawing to the end of our road trip when we were on our way to Mono Lake, driving north on Hwy 395 after a couple of lovely and somewhat adventurous days in Death Valley and Panamint Valley. We had planned to camp for the night in one of the National Forest campgrounds south of Mono Lake. On our drive, however, a snow storm rolled in, blowing down from the Sierra Nevada mountains, dumping quantities of now on the ground. During the final, grueling lag of our drive we dropped the idea of camping and continued straight away to the town of Lee Vining where we checked into a hotel room for the night.
In the morning we woke up to a changed world - everything was white with fresh, pure snow. Moreover - the sun was shining brilliantly and the sky was bright blue. It was the beginning of a splendid day.

Hwy 395 was plowed and clear of snow. East 120 to Mono Lake however, was completely covered with snow. We were the first to drive there on that morning after the storm. After some driving I stopped to admire the tracks we left.
We were the first humans there that morning, but certainly not the first to leave tracks in the snow. Every now and then we came across rabbit tracks crossing the road. However, we didn't see the rabbits at all.
We entered the vacant parking lot, exited the car and looked around. It was a place I've been at many times before, yet now it looked wholly new to me. In a weird way it reminded me of my time in Wisconsin. Yes, it was the snow. And the bright winter sunshine. Nothing else was similar, just the sensation that the world was transformed overnight into a winter wonderland.
But Mono Lake is in California's Eastern Sierra, and the whipped cream-like snow covered plants were desert shrubs, not bare, wintering apple trees. And while the air was chilly, no icicles formed on my eyelashes when my exhale steamed past them.

And, of course, there were mountains all around, and the mountains too were white with snow.
Although the morning air was chilly the sun was bright and warming and it was clear that much of that beautiful snow would melt throughout the day. We didn't spend too much time admiring the parking lot scenery. Wrapped well in our coats and warm hats we started down the trail to the tufa formations and the lake shore.
It was easy to follow the trail to the lake. We saw more rabbit tracks crossing it, and also footprints of other animals, possibly birds, that had crossed the trail before we had arrived there.
My friend was seeing Mono Lake for the first time. I was observing her as much as I was observing the lake and its surrounding - it was a great pleasure to see her discovering its charms.
I too was discovering it again - to looked so different under all that snow!
It was also the first time I've been alone in Mono Lake. My friend and I were the only humans there and the silence and stillness were voluminous and very, very powerful.
Every step we made was fresh. It felt odd to be leaving footprints in the pristine scenery, almost a sense of desecration, in a way. But there was also a great joy of pioneering, of being the first one there to see this new world of winter magic. It was like walking through a wardrobe, only one made of greasewood or saltbush.
We arrived at the lake shore and wandered along the edge of the water. The clouds of brine flies that I had always seen there and thought were an integral part of the lake's experience were absent now, and I could see nor hear any birds, and the silence was very strange to me, yet not unpleasant, or eerie. And it was very, very beautiful.
I was quite surprised to see that the edge of the water was frozen. The night must have been very cold indeed for the salt water of Mono Lake to freeze, even to a thin and narrow film of ice.

The tufa formations, like the plants, had a whole new image under the snow cover. My friend too the time to approach and appreciate each of the tufa near our trail. 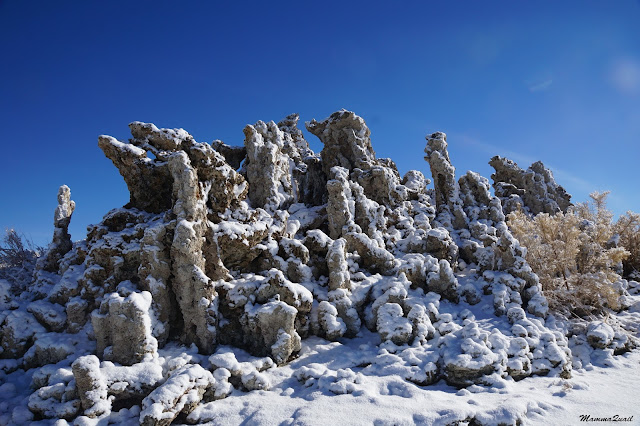 I was looking less at the individual tufa and more at the over all scenery. My gaze kept turning to the mountains to the west - the Sierra Nevada. The peaks closest to us were those of Yosemite. CA-120 and Tioga Pass were closed for the winter, but I knew we would not try that evening any of the other passes north of Yosemite. Yet, I wished I could go up there too that day. 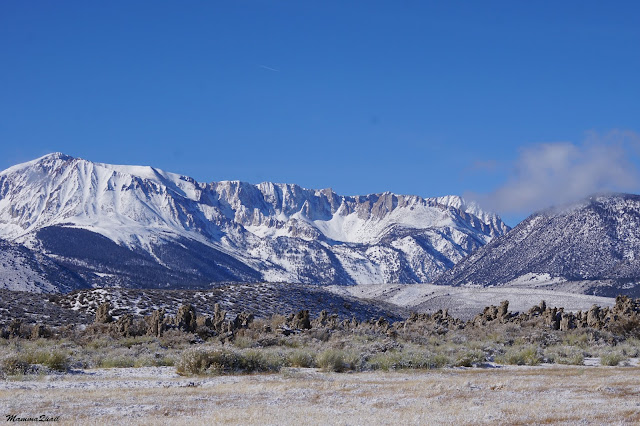 We meandered along the snow-covered tufa and shrubs, passing from one small bay to another going east along the lakeshore. Once off the boardwalk leading to the water the trail was much more difficult to identify under the snow cover. 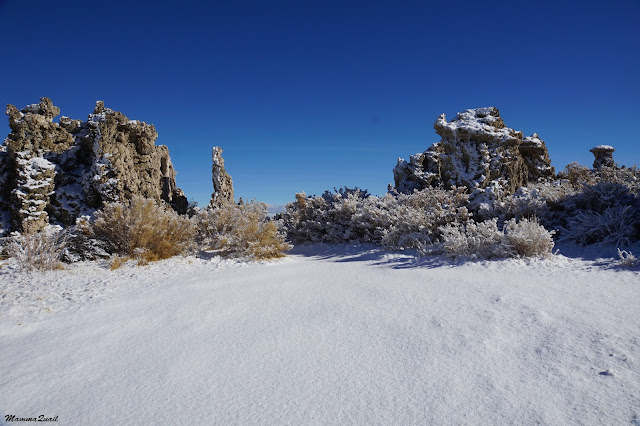 It was much easier to walk along the water whenever possible. I loved seeing the contrast of the white snow with the brown tufa and the blue water, and the blue sky with the white clouds. It was like the world was distilled into these three wavelengths only, leaving all other colors off the palette. 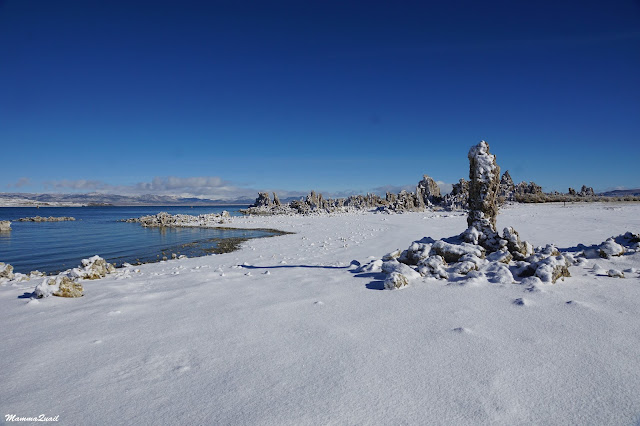 My friend, too, liked seeing shapes in the tufa formations. We had a great time playing imagination games with them.
Mono Lake, a home or a migration stop for many waterbirds was also unusually quiet and empty of fowl. I scanned the water surface but saw none. 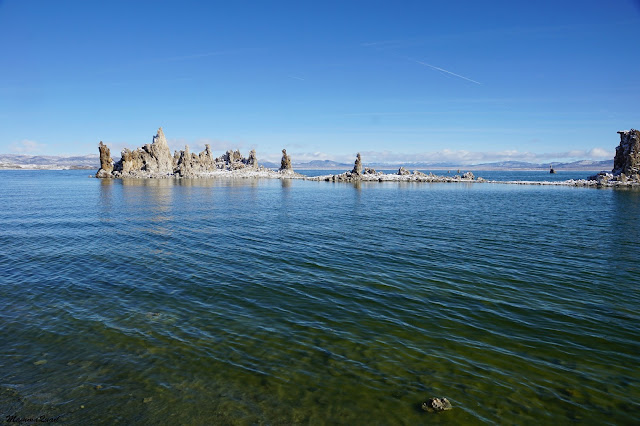 It was only when we were getting ready to turn back toward the parking lot when I saw another living creature for the first time on that hike. It was a loggerhead shrike that sat atop a tall tufa and ignored us completely, even though we passed quite close below its perch.
We made it past the main are of the tufa and looked southeast in the direction of the Navy Beach. There too we could not see any sign of human, or other being's activity.

But wait ... there was something moving way far near the water ...
I looked through the binoculars and saw emitted a soft, 'eureka!'. There were a few ducks sitting on the shore. When they saw us approaching they flew further down the shoreline. I tried my best but the best image I got was from a great distance still.
We turned the corner and started making our way towards the parking lot, following a narrow pass between the bushes that we guessed was the trail. I kept looking for rabbits, or any other wildlife, but the shrike and the ducks were the only wildlife we;ve seen on the entire hike that day. 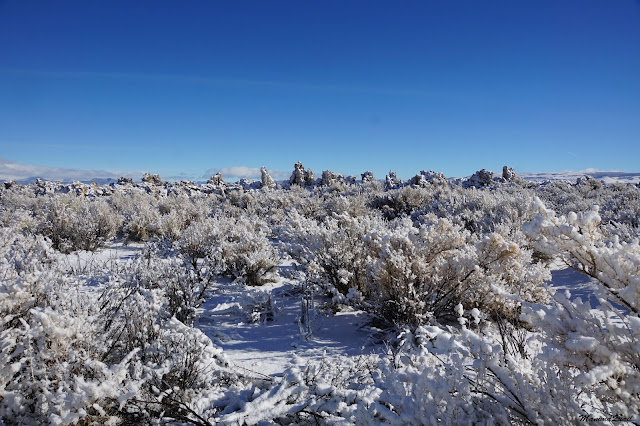 From that part of the trail we had a nice view of the little volcanic butte to the south. It was also covered with snow which eliminated all the other colors of the volcanic soil comprising it. 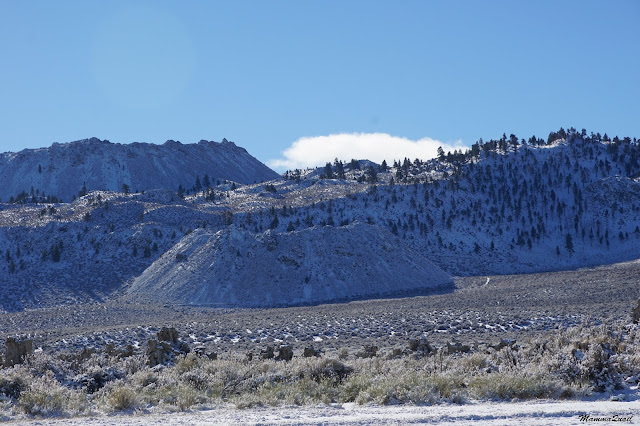 The clouds kept shifting along the peaks of the Sierra Nevada, but never floated eastward over our heads. 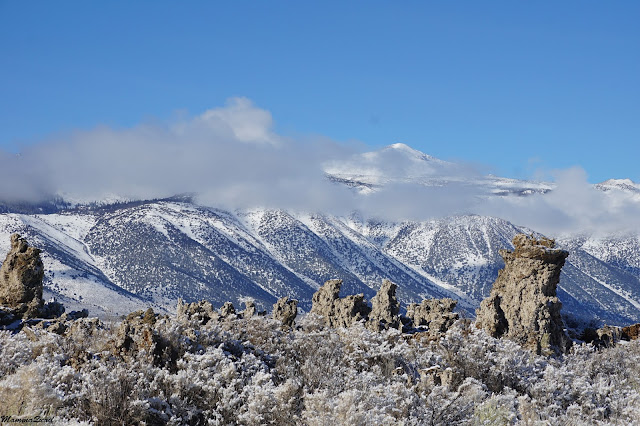 We made it back to the car. It was nearing mid-day and we were still the only humans there. Not that we minded it in any way. We decided to drive a bit along the dirt road that continued eastward, hugging the lake from south and see what was there, but the drive was very slow and somewhat precarious, and soon we turned about and drove back to the main access road were we were spoiling our original car tracks with a new set on our way out. 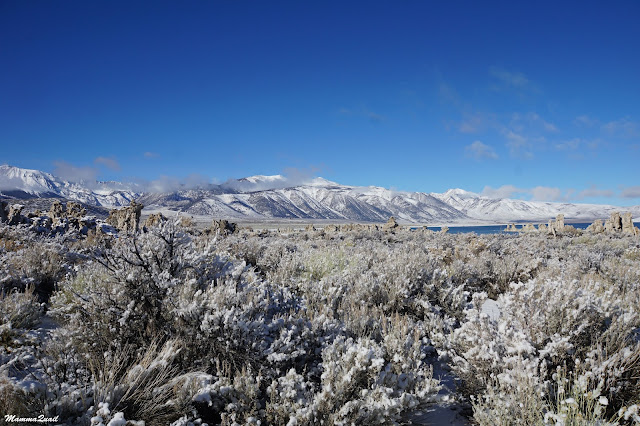 By the time we were leaving Mono Lake much of the snow on the bushes had melted and the 'whipped cream' look was gone. After we returned home another visitor had posted online a photo of Mono Lake two days after our visit there - there was a bit of snow still on the ground, but the vegetation, as well as the tufa, were all brown again and much of the winter wonderland magic was gone.
Mono Lake is always a beautiful and unique place, worthy of visiting and revisiting. It's just that this time I had the unusual privilege of being there right when it emerged from Nature's bridal salon all dressed in virginal white. And these images of beauty I will remember forever.