From Hard Labor to Soft Leisure: Hiking the Coastline and Hills of China Camp State Park 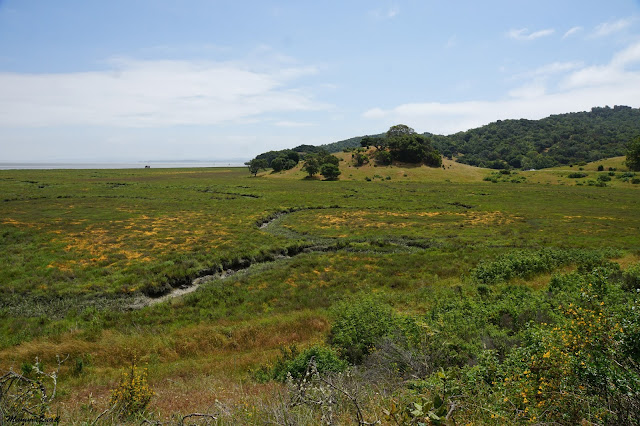 Leading a 4H project is one of the better ways to get involved in one's community. Leading the Redwood 4H Hiking Project for the last few years had been a very rewarding experience for me on many levels. One of them was the constant lookout for new places to hike in the Bay Area.
One of my recent discoveries was China Camp State Park at San Rafael.
On the later half of the 19th century the place used to be a camp for Chinese workers. Now it is a California State Park with protected bay wetlands and beautiful oak forest hills. It is also a very popular place for area residents for hiking, jogging, biking, and boating.
I went there in mid-May to check out a hiking trail for the 4H Hiking Project that I lead. It was a nice day, not to warm, a bit windy even. And it was shortly after the area had been blessed by rains. There were very few people in the park. I stopped at the visitor center first, found it closed, then picked up a brochure from the nearby kiosk and drove off to my trailhead choic.
It was a warm day, and partially cloudy with a light breeze.  I started on the narrow trail with a slow pace, taking in the view and looking for wildflowers.
And wildflowers I found. Many of which were not California native plants, but species brought here from the old world, many of which on purpose, like this flax in the photo below.
Other non-native species 'hitched' a ride over the ocean and became established in California. Many of them do so well here that they pushed native species into small niches to become endangered species. Such an invasive weed is the hairy vicia below.
Here and there, however, I did find some native plants in bloom, like this owl's clover.
Every now and then something long and thin slithered quickly from the trail into the scrub as I approached. The movement was so quick that I never got the chance to see clearly what species that was, let alone photograph it. I could only tell that they were snakes, small and pale-greenish in color. My hike had disturbed their mid-morning sunbath.
The butterfly didn't mind sticking around for a few seconds to pose for me. 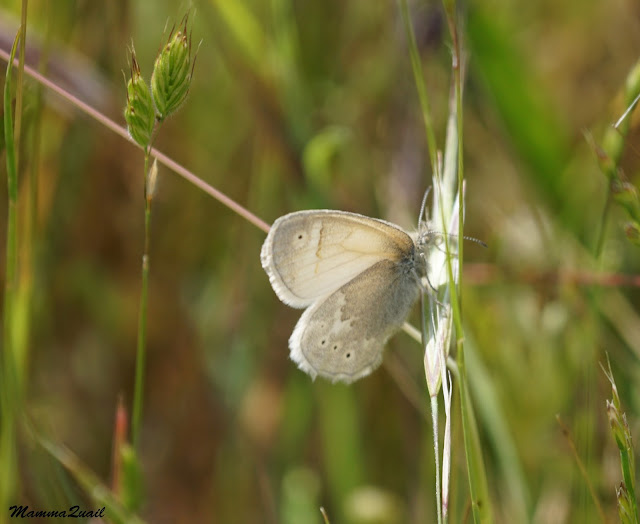 As first the trail was flat, but as I was getting further from the road it started sloping up the hill. The slope facing the bay and the low wetlands were grassy dotted with few oaks and some bushes. One of them was familiar to me from urban landscapes, although in its old world origin it is usually a wild plant.
From the ascending trail I had a wonderful view of the Bullet Hill wetlands, and I could tell the line between the gran wetland vegetation and grasses of the hills, turning yellow in their transition into summer.


Presently the trail lead me into somewhat thicker woods of mostly oak and laurel. Every now and then the bright red bark of a madrone would gleam between the other trees. The Bullet Hill trail met the Shoreline Trail and I turned to the right and continued north back towards the road. 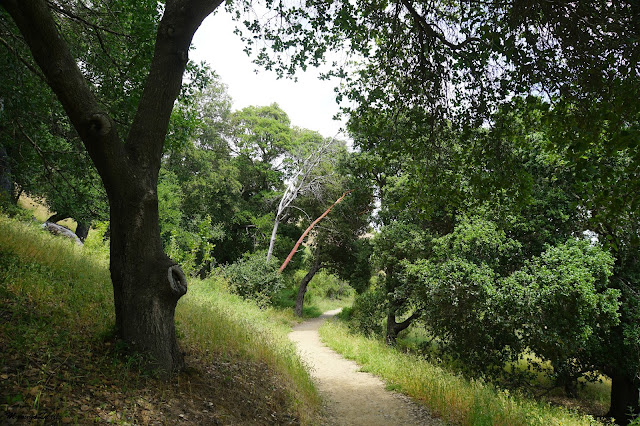 Nearing the road the trail emerged from the woods and once again I was walking through open grasslands. I was trying to go a bit faster - there was more grounds I wanted to cover before leaving the park. Soon, however, I got distracted again - this time by some lovely larkspur plants that were blooming by the trail, so pale and so well embedded in the dry grass that I had nearly passed them by.
Easier to spot were the brodiaea flowers that are always a pleasure to see.
I reached the road and crossed it to the north, heading on the narrow trail that looped around Turtleback Hill. To my right stretched the salt marshes - once very common alone the bay shores and now a highly endangered habitat.
The trail circles around the hill but doesn't go up. In fact, there are signs posted that there is no going up there, for habitat protection. I obeyed and remained on the trail, once again under the trees.
The shady woods provided a nice refuge from the sun. Very little bloomed there - most plants were already done and gone to fruit. What did bloom, however, were some vines with tiny pink flowers that added their lovely color to the mostly green scenery.
I circumvented Turtleback Hill and as I came around the curve back towards the road I noticed a dark figure behind a tree, very close to the trail. It was a deer, and it didn't move as I approached, just looked at me warily. As I went around I saw that she was a doe - a heavily pregnant doe. I wondered if that was the place she were to have her fawn.
I didn't linger there to explore further - I didn't want to bother her.
I Made it back to the road and continued along its shoulder to where I was parking. There was more time still and I decided to extend the hike a bit, so I continued walking east along the roadside to the Shoreline Trailhead.
The soft, gravel road shoulder had a few little weeds growing on it. Among them were few small morning glory plants that despite them being in full bloom I nearly stepped on them - they blended so well with the gravel.
The Shoreline trailhead was the beginning of a wide gravel road. This road is generally closed to vehicles, except for users of the day-use camp area, about half a mile up the trail.
Not another human soul was on that road the day I hiked there. There were plenty of animals, though. Like this bold junco that hopped on the path, allowing me to get quite close before disappearing into the vegetation.

Bramble bushes were blooming along the trail, likely the invasive Himalayan Blackberry. I thought it would be good to return there in a few weeks to harvest some, but the following weeks were too busy for me and I forgot all about it. I am sure, however, that many other had enjoyed the crop.
A native California relative of the blackberry was blooming nearby - the delicate and beautiful California wild rose. Some of the flowers had spiders in them, lying in wait for unsuspecting rose pollinators.
Hedgenettle too was blooming, decorating the trail side in ample quantities.  An unassuming plant with delicate, blossom. I like it a lot.
And there, between the brambles and other bushes, I saw a head of another doe poking out. She too, as I saw when I passed her, was heavy with fawn, and wouldn't budge. She just eyed me as I walked by her. I saw a third pregnant doe late near the road as I drove out of the park. Apparently I went on my hike at the onset of fawning season there.

Shortly I came to the day camp area. It looked abandoned and the water spigots were dry. Little flowers bloomed at the edge of the lawn. The buttercups photos didn't come out well, but the blue eyed grass' did.
Large oaks adorned the camp area. The familiar rusty door hinge sound of the acorn woodpecker call came from the trees. soon I saw one perching at the top of a bare and holed stump.
I moved on. Beyond the camp site the trail became the narrow hiking path like the one I had hiked earlier. Soon after leaving the camp area the trail plunged into the woods. There were mostly oaks there, and the forest canopy wasn't thick, allowing quite a bit of sunshine to seep through.
The thin forest undergrowth had a few wildflowers, including this common tarweed. I love their pretty blossom, but I selected this photo as it shows the resinous follicles that cover the green parts of the plant, and which gave it its name.
A less sticky plant that bloomed there was the Pacific Pea. It was just beginning to bloom and I saw no fruit pods yet.
It was only a short distance until I came to the intersection with the Bullet Hill Trail on which I had begun my hike, and I turned right onto it. I saw no more snakes as I headed down the hill towards the trailhead, but there were plenty of lizards afoot.
It was already afternoon when I was taking the last steps towards the Bullet Hill Trailhead. It was warmer, but also much windier. The butterflies didn't mind the wind much and continued fluttering about. This one came down and sat on the trail before me, as if for a special pause.
I finished the trail but was not ready to leave the park yet. A short trail leads to the top of Bullet Hill where there's a small clearing and an vista point over the wetlands. I took my packed lunch and went up there to rest, eat, and enjoy the view. I couldn't linger for long, though - I had to get back home intake to pick up the chikas from school. 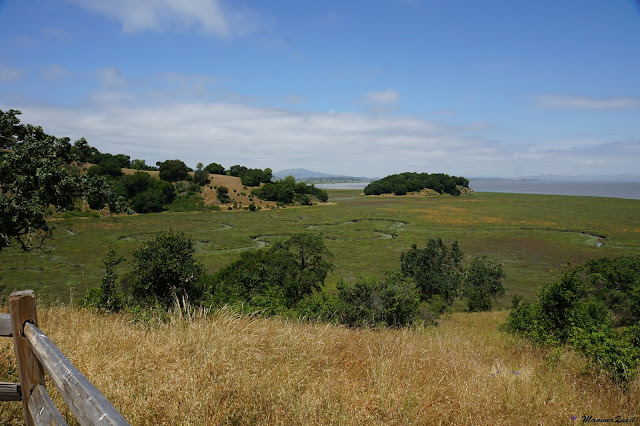 A week later I took the 4H Hiking Project on that trail and I was amazed at the transformation of the park - it was jam-packed with people, and the camp area had a major biking event going on. We barely found parking along the roadside, and throughout the hike we had to watch for cyclers zooming by. I wish to hike there again, but I'll probably refrain from doing so on nice weather weekends.