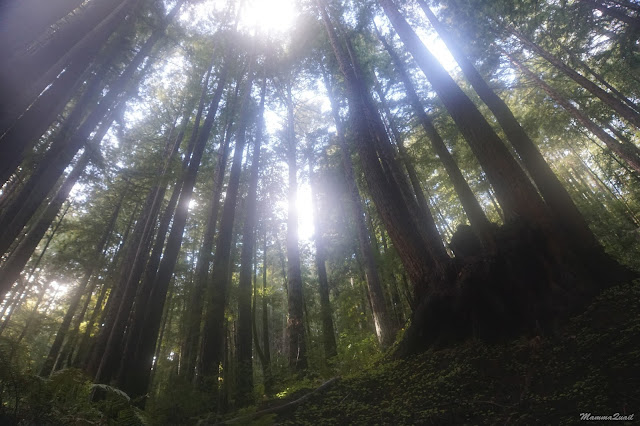 A few years ago I stood at the Henry Cowell Redwoods Visitor Center and inquired about hiking trails. The docent suggested I'd check out the Fall Creek unit, a later addition to the State Park, across Hwy 9. The first time I hiked there I forgot my camera. The next time would be years later.
Henry Cowell Redwoods State Park is a patchwork of several land parcels that were donated and/or purchased over time. The latest of these additions is the Fall Creek Unit, which used to be a private land exploited for lime quarrying and a redwood logging until donated to the State of California in the year of 1972 by the Cowell Family Foundation.

The Fall Creek staging area is tiny and fills up very quickly. Every time I go there I make sure to arrive early, before the place fills up. The good side is, that the trail is not crowded as those of the main park's unit.
On January 2016 I was there with a friend visiting me from overseas. She grew up and lives still in a desert area, and saw this forest hike as a special treat.
Our hike begun with a short and steep downhill trail to the canyon of Fall Creek. There we took a left turn going northwest upstream along the creek.
A few days only after it had rained, the trail was still damp, even muddy in places. The vegetation was wonderfully lush and vibrant, and the forest undergrowth left very little earth to be seen.
Beads of condensed fog or misty rain that lingered from the previous night were trapped on the wide-spread leaves, and shone on spider web hammocks prettier than the best of jewels.
Fallen logs laid along the trail, cut and pushed aside by the park maintenance personnel. Some were quite recently cut, but others were already base for a small garden of mosses and mushrooms.
The creek flow was nice and high. I wondered about the creek crossing that laid ahead but presently drove the thought out of my mind. We'd deal with it when we'd get there.
Then we came upon one of the park residents. It is always a pleasure for me to see one of these redwood forest inhabitants. No hike in the redwoods is complete without meeting a banana slug.
About a mile and a half into the hike we arrived at the trail split. We took the right turn and continued up the eastern tributary.
Our path crossed the creek a couple of times, with no additional bridges. The widest of these crossing had a long wood plank that was laid across, but the creek was so swollen with water that it didn't actually bridge the banks. The water was fairly shallow there so we waded.
The water was also very cold.
The path continued upward with a mild slope. We hiked briskly, stopping every now and then to take a closer look at something interesting, like this pretty garden that sprouted on a rotting stump.
A mile further up the trail we passed another trail intersection, with the right branch leading north deeper into the woods. We kept left, soon turning back south, continually going up.
The odor of mushrooms was a strong component of the wet forest smell. Indeed there were mushrooms on the ground and on rotting logs, but I got the impression that although it was a wetter winter than the previous one, there were much fewer mushrooms now.  I wondered if more the fungi were investing their energies in the growth of their hyphae this year.
Eventually we got further from the eastern fork of Fall Creek, and after some more climbing we crossed over the hill to the basin of the west fork and begun descending down to the canyon below.
In the late 1800 the new settlers quarried lime for construction in this area. The quarrying involved blowing up bits of the mountains. Just before we met the creek we came upon the old explosives storage place. I peeked inside but there was nothing interesting to see there, just damp soil and rotten smell.
We reached the creek and crossed it. on the other side we saw the kilns that were used to cure the lime from the rocks. They were large brick structures that had no similarity with the linekilns I've seen at Limekiln State Park in the Big Sur.
We took our break by the kilns, looking around and inside them, exploring the area. The lime quarry here had been in operation of about 70 years and these kilns were fed wood that was logged locally. I suppose that at the time the whole mountain was bare and looked like a disaster area.

As we continued down the trail we went by the big mound of quarry rubble that was left behind. The mound was growing trees and shrubs, and all the rubble stones were covered in moss and lichen. Give it a hundred more years and none of it would be visible.

From there we went straight away down the creek, reconnecting with the main trail we came up on.

I hiked the very same trail twice last May, and on one of those times I remembered to bring my camera along. As expected, the trail was dry and there were plenty of other people hiking there as well - chances of human-free shots of the trail were few and far between.  The creek flowed lazily, and the water level was low; I had no worries about crossing the creek later on.
There were also many flowers blooming along the creek and on the slopes. Even plants that are normally early bloomers still wore a few blossoms at the end of May.
I was very excited to find a blooming orchid near the creek. I was less excited finding out later that it was an exotic species and not native to California. Still, an orchid is an orchid. Always beautiful.
A more common wildflower, and certainly a California native, is the hedgenettle, which was growing in large numbers along the trail.
I am always amazed to see the change that spring brings to the forest. While most ephemeral flowers were already done, the late bloomers were going on strong, and the forest floor was alight with pretty colors.
This time I turned left at the trail split and ascended along the western branch to the limekilns. While my companions of the family hiking group examined the remains of the kilns I paid more attention to what grew on and around the crumbling structures.
And wherever there are flowers, there are their pollinators. And if the honeysuckle bloom, there would be the bees suckling on its sweets.
From the kilns we went east up the hill and away from the creek on our way to the eastern tributary. Poison oak grew along the trail and, while keeping a safe distance, I appreciated its delicate beauty.
I was surprised to see milkmaids still in bloom at the end of May. There were only a few of then, bringing up the rear for this species' bloom season.
The forest about Fall Creek is a mixture of trees, but the coast redwood is one of the more dominant trees there. None of the redwoods there is an old growth -  all save the Big Ben tree were logged decades ago. Old growth survivors can be seen in at the Redwood Grove in the main park area.
I don't know if the fall creek forest will become a mostly redwood forest again, but the young redwoods that I did see there were quite impressive. I hope they will be protected and become the old growth trees of the future.
The redwoods looked healthy and vibrant. I like seeing their new growth as it contrasts beautifully with the older needles.
Perhaps I should say that most of the redwoods looked healthy, because I did come upon a tree that had a resin-leaking burl, a sign of being diseased with something. I think that was the only time I've seen a diseased redwood and I sure hope hat didn't spread.
The redwood trees have their on community companions, like the redwood sorrel posted above, and the redwood violet below. Delicate and pretty, they complete the forest scenery.
Crossing the creek in late May was no trouble at all. There was no need to wade across, but the weather was warm and many of our group wanted to wade and we spent some time hanging by the water.
Eventually, however, we moved back down the creek and rejoined the main trail from its eastern fork.
The wider canyon allowed more sunshine through the canopy, and I loved seeing the gleam of the broadleaf trees in the light.
I was fortunate to discover some ripe thimbleberry that hasn't been harvested by the hikers before us. I pointed it out to my elder chika and although I continued on I doubt she'd left any for the people behind us.
A great maple tree had fallen across the trail sometime between January and May, and the park's personnel had cleared the trail from the debris. The tree's canopy was all removed and the base of the trunk was nearly all uprooted and exposed to the air. A bit of the root crown was still in the ground though,, and it was enough for the tree to continue living. I looked with awe upon the new leaves it sprouted out of its trunk, evidence of the trees clinging to precious life.
Well too late to see it in bloom, but the trillium always captivates me. They're also good redwood companions.
We were nearing the Fall Creek trail intersection. I was sorry that the hike would soon come to an end, but I was also looking forward to get relief from the heat.
We stopped by the creek just before the final ascend back to the parking lot. In a nice, shaded spot we sat down and told stories of forest fairies.
Then everyone when back up and I took a goodbye photo of Fall Creek before heading up the trail myself.

The trail connecting Fall Creek with the parking area is short and steep. On my January hike I didn't stop to take photos there, but on May I had to - there were flowers blooming.
Not so close to the creek it were the plants of drier land that were showing off their colors. And it was a pleasure to see.
From the parking lot it's a short distance to the main park's entrance and the big, old growth trees. I couldn't call it a day without paying them a visit too.