A Triple-Break Hike at the Mormon Rocks

A day after our fabulous hike in Bolsa Chica Ecological Reserve we said goodbye to our friends and started northeast on the road to Death Valley.
For a good part of the morning we were crawling on I-15 with all the mass of humanity that was migrating out of the larger LA area before Thanksgiving. We needed a break from driving, a place to stop and stretch out and a short online search came up with a little place in the San Gabriel Mountains called Mormon Rocks.
Mormon Rocks is a small area of San Bernardino National Forest on Hwy 178, about 1.5 miles from Cajon Pass. The short loop trail begins (and ends) at a local fire station that other than two picnic tables on the adjacent lawn has no other public-accessible facilities such as restrooms or a faucet for drinking water.
We found the place without difficulty, got the cameras out of the car and went on our hike. 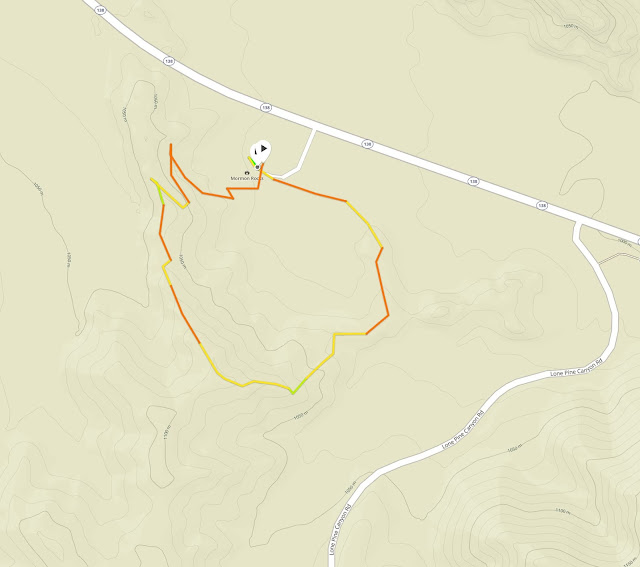 The Mormon Rocks could not be mistaken - huge lumps of wind-rounded white sandstone protruded from the earth, standing out against the dark landscape.
From the first look we realized that something was wrong. Everywhere our eyes could see the landscape was black, save for the sandstone rocks. It looked like every living thing in the surroundings had been incinerated to ashes. As it happened, we were there shortly after a large wildfire had devastated the entire area.
A part of me wanted to turn and bolt, but it was too late to go looking for another hiking place nearby. Besides, I still wanted to see the place, so I kept quiet and followed the rest of the family up the trail.
This is (or was) a chaparral dominated area. The charred remains of the bushes were the only testimony for what must have been a thick vegetation cover. 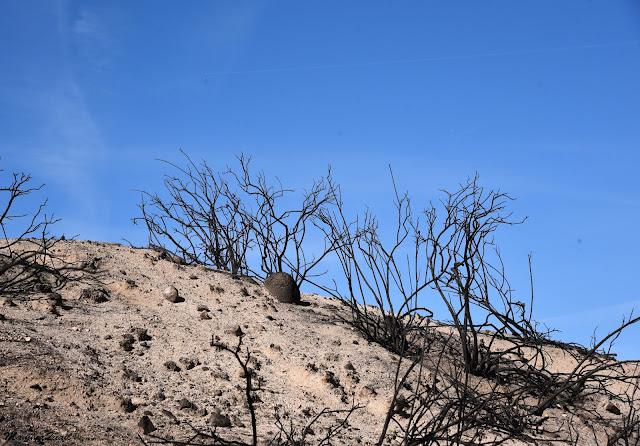 We ascended the hill on the trail leading to the rocks. The bushes by the trail looked most definitely dead. Only some had a bit of base budding, suggesting that the underground parts of the plant were alive still and ready to regrow.
The yucca was a more visible survivor. Charred pineapple-like ovals protruded from the powdery soil, with light green tufts of blade leaves in their center. A core yet lining from which the plant will regrow.
I didn't expect to see any wildlife in the place. Indeed, it was eerily quiet. Pappa Quail, however, did find a few birds. They too were subdued, emitting no tweets.
A kingbird perched atop a corpse of a sycamore tree some distance from the trail. Kingbirds use perches like that, searching for food with their keen eyes. What was this bird hoping to find in the desolation, I cannot tell. Perhaps it was lamenting its burnt home.
My feelings arose a little when I saw clear evidence of recovery. The area had already seen some rain, and little annuals were sprouting in small patches between the charred bushes. The less thrilling thing was that most of this new growth was of stork's bill, a non-native, highly invasive weed.
We got up the ridge of the low hills and looked on the other side. A wide river stretched below us, completely dry save for a narrow trickle at the base of the hills. It was there that is became apparent to us just how big the fire was. 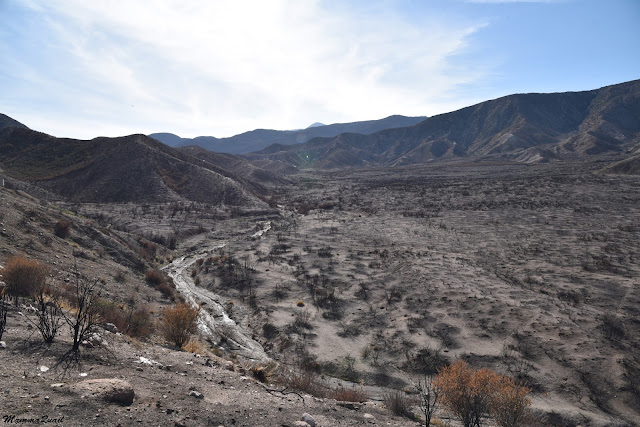 There was no one there we could ask, and nowhere a posted sign with information about the fire. I've done some research in preparation for this post and found out that less than two months before our visit there the area has been devastated by the Blue Cut Fire, which burned over 20,000 acres.
I though it ironic that this fire raged right by the local fire station. From the ridge we had a good view of the fire station area where we had begun the hike. We also had a nice view across Hwy 178 and of the rocks on the other side.
And we also had a great view of the rocks. There was a big one behind us, but the large mass of them was ahead of us, east of the fire station. We were heading intuit direction. 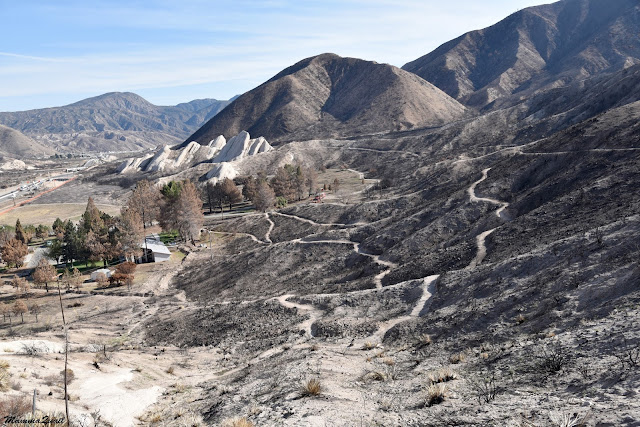 The trail now followed the ridge. Soon it became apparent that there wasn't just one trail, but many makeshift ones that looked as much used as what would be the official trail, and we could only guess which one was that. So we simply followed the one that seemed to lead us in the straightest path to the rocks.
All that time I kept looking around for more signs of recovery. They were there, but still small. At the very beginning. 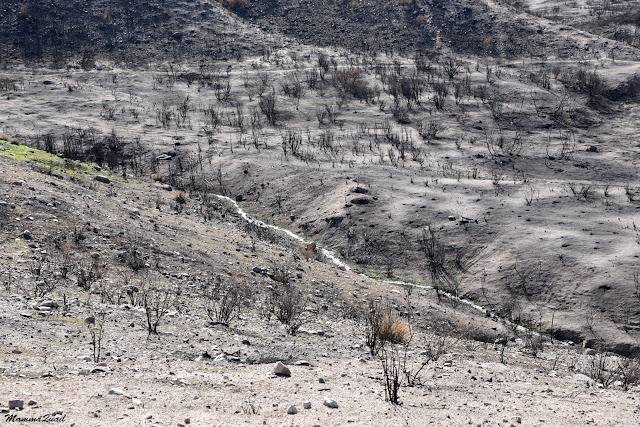 Then, as we came across a minor hill crest, I saw a patch of green to the south. It was mature chaparral! That patch of chaparral was the only surviving area that escaped the fire. I could see the reddish-brown rim of dead vegetation that died just before the fire did.
It was too far for us to get close, but I did take a photo with the highest magnification I had so see if I could make any details when looking at it later. But even like that, all I can tell for sure is that the bright green lumps are manzanita. Everything else was too distant for me to make any clear identification. 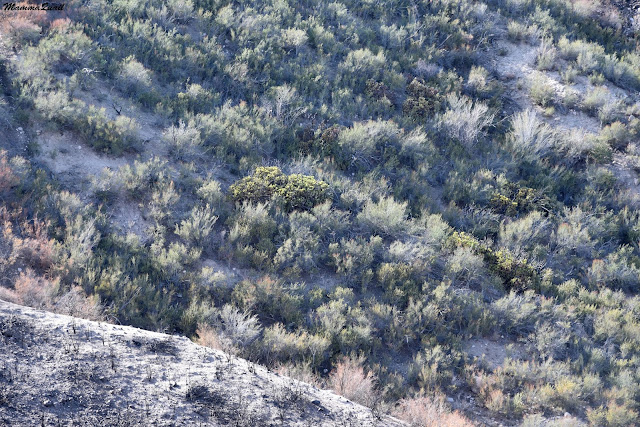 The trail we were walking on got really, really narrow. Moreover, we were walking at times right on the blade of the ridge. While Pappa Quail and the elder chika were making fast progress, the younger chika had some difficulty transversing this terrain so I held her hand and we walked slowly, step by step, until she was once again sure of her footing. 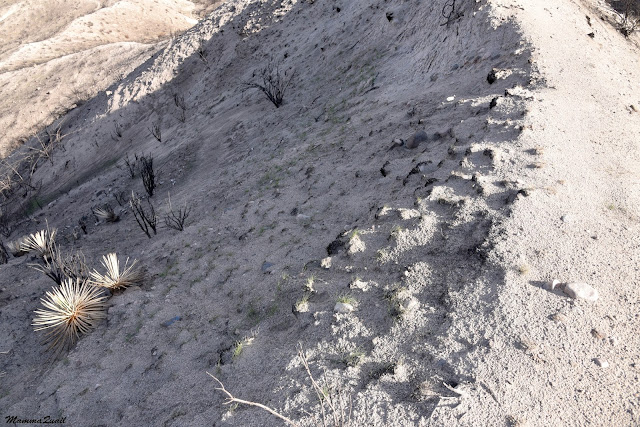 The slow pace allowed me to take a longer look at the new growth. It appeared that the fresh green grass was growing in small bunches, at small ripples of the hillside caused by the now dead old vegetation. 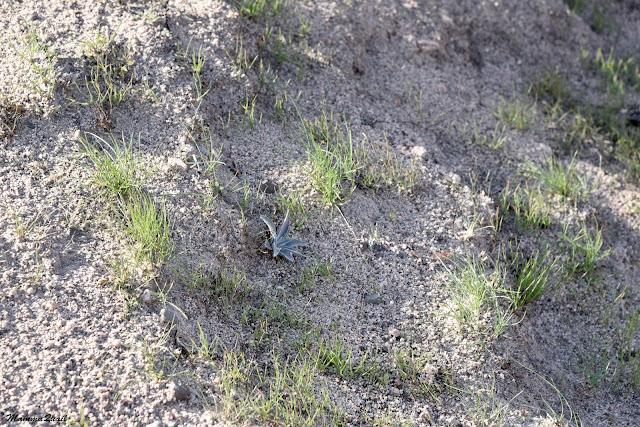 After some slow, careful treading, younger chika and I were making a still slow descent to the big group of Mormon Rocks. 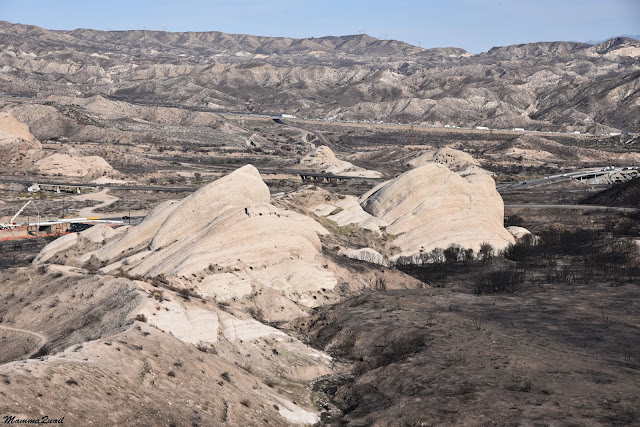 It was a beautiful day, but windy. A coulee of ravens were circling the sky over the highest rock. Occasionally they landed on it, then took off to the air once again.
Pappa Quail and the elder chika had breezed by the rocks without stopping, and were now two tiny dots on the trail way down below. The younger chika felt two unsure to get near the rocks so I asked her to wait for me by the main trail while I went to check them out up close.
I was fascinated by the layers of sediments apparent in the rock. Stones of different colors and sizes were embedded in a finer grain long ago soil, now packed into a hard sandstone. They looked to me like gems. 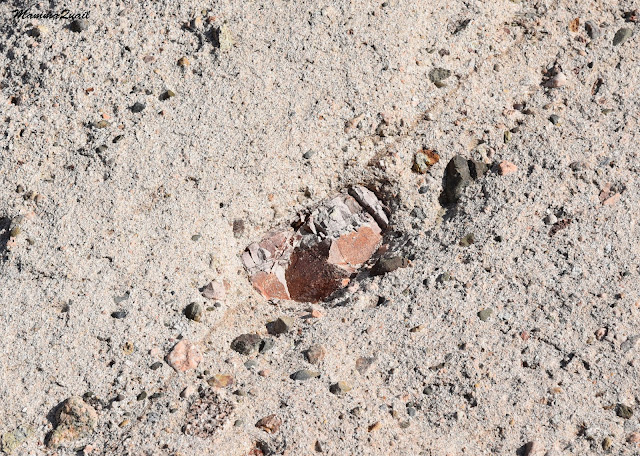 I came back to the trail, helped my chika back on her feet and we resumed our descent to the valley and the fire station below.
We came down to an alluvial plain that was dark with ashes and dotted with the charred remains of the former chaparral. It was a pretty dismal sight.
It was there that area that Pappa Quail saw another bit of life in a mostly dead area.
As I approached the incinerated field I noticed the bright green 'flames' that were licking the base of some of the charred bushes. They were regrowing!
This new growth really cheered me up. I wonder how this area look like right now, after a good rainy season and a few more months to recover.
We crossed the charred area and made it back to the fire station parking lot. As I approached the car I noticed right away that something was wrong. My elder chika was sitting quietly at one of the picnic tables while Pappa Quail was working frantically to prepare some lunch, and I could tell that he was very upset. Then I saw the black mass on the asphalt behind the car. It was Pappa Quail's new, and much prized camera.
When he saw me, Pappa Quail told me that that as he got the stove and food out of the car the camera dropped out through the opened back door and crashed in a fashion that broke both camera and lens. As he told me that he picked up the remains and tossed them into the large waste container at the end of the parking lot (after getting the memory cards out, of course).
"There goes the rest of the trip," he said. " There won't be any birds anyway in Death Valley," he added.
We had a very quiet lunch.
As we were cleaning up and getting ready to go I suggested checking out the nearest town, Phelan, for a camera shop. It was already late in the afternoon and the day before Thanksgiving so Papa Quail wasn't all to hopeful, but he did a quick online search and found a store that would be open till somewhat later, so we set our navigator to that place, because although Pappa Quail's camera was totaled, our road trip experience could still be salvaged.