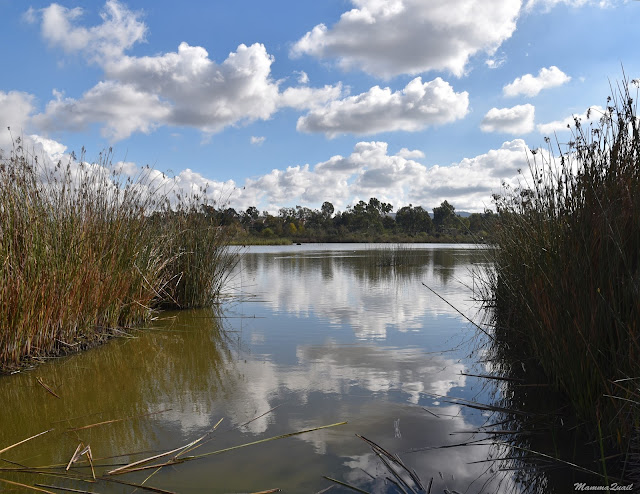 Our friends from Orange County visited us last summer, and by the end of that visit we have made plans to meet again on the days before Thanksgiving, and my friend had sealed the plans by booking us 3 nights at O'Neil Campground at Trabuco Canyon.

Being a perfect teaser for the upcoming winter, it rained on our first full day there, and all through the night. On our second day the weather cleared up and following our hosts' suggestion we all went to the San Joaquin Fresh Water Marsh Reserve in Irvine, where we enjoyed a lovely hike together.

The sanctuary is located in area of the Michelson Water Replacement Plant, and the visitor center is in a small building amidst other structures of the facility. The trail to the ponds goes through a lovely garden where butterflies were fluttering by. Nearing the first pond I found one that was sitting reasonably still. Looking at the photos I could see why. Poor thing.
The water replacement plant is a series of ponds of different sizes, water canals, and brush areas. The ponds are surrounded with wide, packed gravel trails that are very comfortable to walk on, although one needs to watch of the little facility vehicles that move there at times, and also for too zealous joggers that come running around the corners.
There are countless ways in which one might wander through the sanctuary. Below is the map of the hike that we did, trying to get to as many areas as we could before the children got too antsy. All and all we walked there for 2.4 miles, but covering all the trails a hiker could cover at least twice the distance.
We came upon the first pond. The pond was surrounded by high vegetation that was broken through in several places to allow view of the water. The plants at the water's outer rim was tule, tall and lush. Beyond the farther shore were the buildings of an industrial park, a visual reminder that we were hiking within the bounds of the city of Irvine.
We were there late in November, but some of the plants were still blooming nicely, like the bladder pod shrubs that grew by the outer rim of the vegetation belt surrounding the pond.
We there with our friends enjoying a lovely hike together, but another objective was to see and photograph birds, of course. The first pond had quite a few ducks and pelicans, but all of them were far away, near the distant shore. Pappa Quail kept scanning the water for more waterfowl, but many were flying up above us.
Pond #2 also didn't yield many bird photos. Instead, Papa Quail found a turtle basking on some driftwood.
We moved on to pond #3, where finally we found waterfowl close enough to look at.
Grebes, ducks, and white pelicans. Swimming peacefully together. No territorial conflicts, no mating-related fights. No chicks exploring the water around their mom. This was autumn.
There were more flowers to see as we made our way between the ponds. Most of them were composites, which have some of the longest bloom season.
Even though past its peak bloom, the arrow weed bloom was very beautiful and added some nice spring color to the local fall.
For most of the trail between the ponds we had no direct view of the water, except for the gaps torn in the rim vegetation. But the bushes and trees that lined the water were too a busy bird habitat. Little bush birds were active everywhere between the branches.

Meandering between the pond we made it near pond #4 which looked more like a long, wide canal. In the water cruised a small pos of white pelicans, moving as one to dip their larch beaks in the water and get the fish.
These birds forage in perfect synchronization. It is very impressive to see, even with just a small pod.
There is a drier, bush area in the northeastern side of the sanctuary, and we were going there to see what we could find. The children were all walking together, talking and laughing. Papa Quail and our friend walked together too, but I kept mostly to myself, relishing the fact that for the time being, no one wanted any attention from me.
And it was a most lovely day. 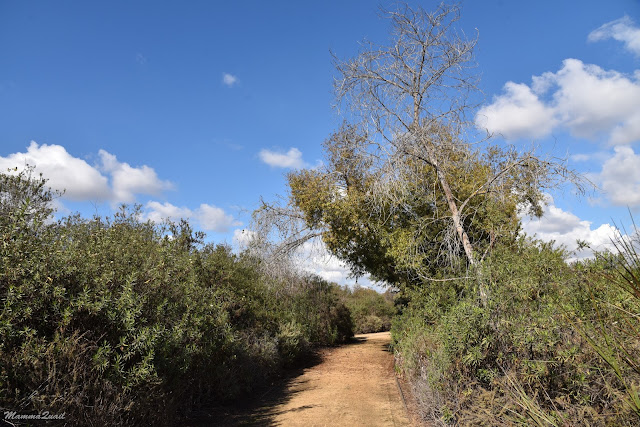 On our way t the bush birds area we passed a small pond with some solar-powered instruments in its middle. I don't know what is is - possibly a water-quality meter of a sort? 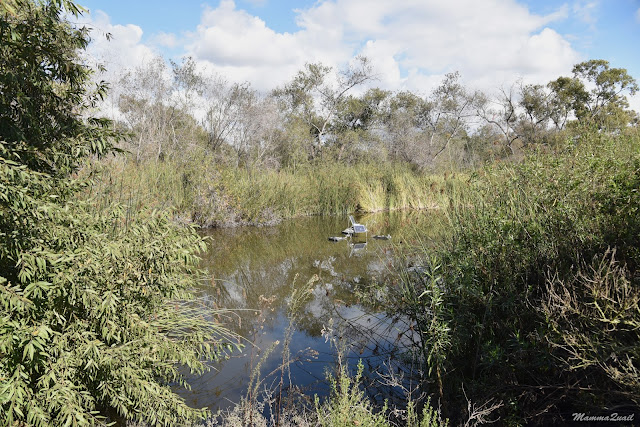 The bush birds were certainly waiting in the bushes. Well, not exactly waiting. They were all over the place, eating seeds, and singing between twigs and branches. The bush scene was very active.
And there were more plants on bloom, too. Some goldenbush shrubs, and others that we've seen earlier on the trail.
With all the activity and the bloom it was hard to remember that we were nearing autumn's end. But it wasn't really possible to forget - not with the sycamore trees turning their leaves and getting ready for winter. 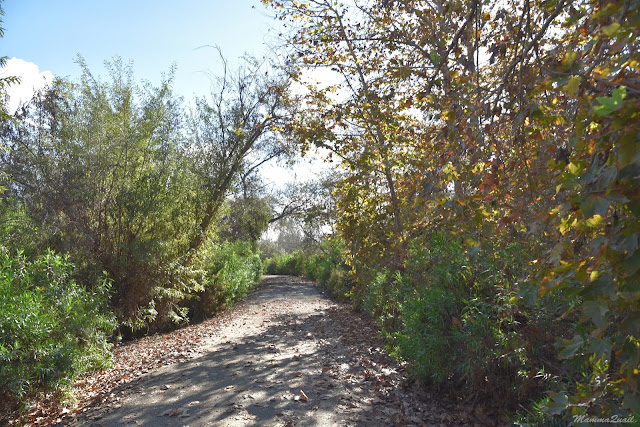 The children started asking how long will the hike last. And they were pretty intent on getting an answer. By that time we were ready to loop back to the pond area, so we chose another trail for going back. Part of it was a raised board walk, but the area underneath it was dry. 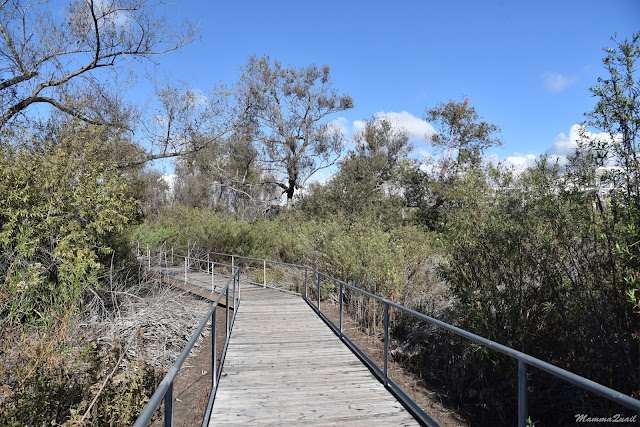 The trail back took us across one of the water canals that criss-crossed the water facility. I was immediately attracted to the pretty reflection of the trees in the water. 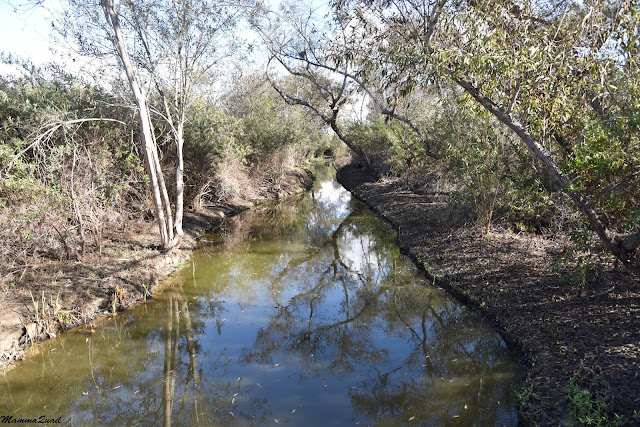 The excitement, however, was on the other side of the canal, where a great egret was ambushing pray. Shouts of excitement caused me to turn around and I saw that the egret was indeed successful in its hunt - it held a wriggling crayfish in its beak, and after a few seconds had swallowed it thoroughly, legs, pincers, and all.
The egret continued foraging along the canal, unbothered by our presence. We hang around the bridge for sometime, waiting to see if the bird will catch anything else, but eventually the children got impatient and vocalized their wish to get something inside their own crops, so we continued on.
As we cleared the tall trees we had a good view of the osprey's nest on a pole far to the west. We actually hiked very near it earlier on our hike, but the osprey wasn't there at the time. Now it was standing there, looking around.
Once again we were at the ponds area, and we turned onto the northeastern trail that would take us directly to the visitor center area. We thought it would be the fastest route.
Nature, however, paced us considerably slower, because we were walking now near a shallow pond that proved to be the richest with birds yet.

Most of the birds we saw there were shore birds. Many shore birds, that were wading about in the shallows, searching the mud for morsels to eat. Papa Quail lingered long by that shore.
That pond was also the best one to reflect the sky and the leftover clouds of yesterday's storm. 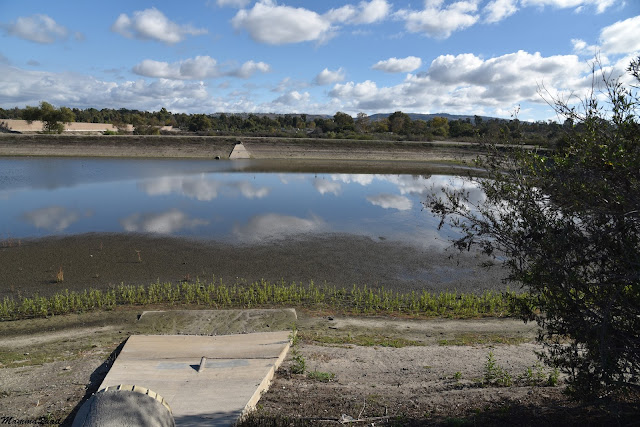 But the nicest sighting we had in that pond was of two male teal - a cinnamon and a blue-winged, swimming side by side, each in turn dipping his bill to sift the murky waters.
When finally torn away from the pond, Pappa Quail topped the bird series off with the very common, yet very pretty white-crowned sparrow that hopped on the trail.
It was past mid-day now, and the children were whining in earnest. We had promised them ice cream after lunch and that helped things a bit. But indeed, we were walking faster now, trying not to get distracted by all the beautiful sights along the way. 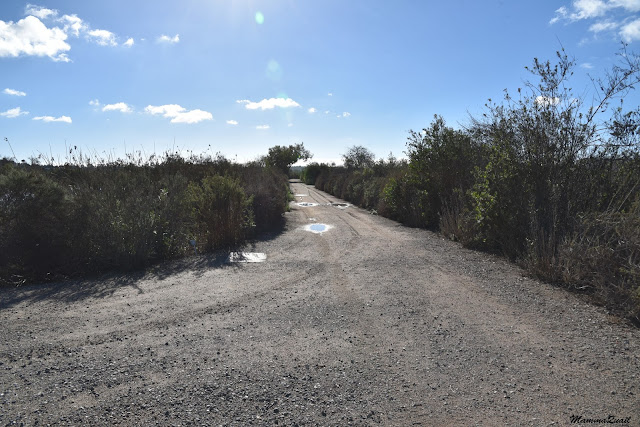 It almost worked. Almost.
Because some sights simply can't be ignored.
Especially if they fly right over our head.
Finally we made it to the last pond of our hike, an almost dry pond at he back side of the buildings area. Everyone else in our little party were already heading down to the trailhead but I lingered a bit behind, as if to say farewell to this place. 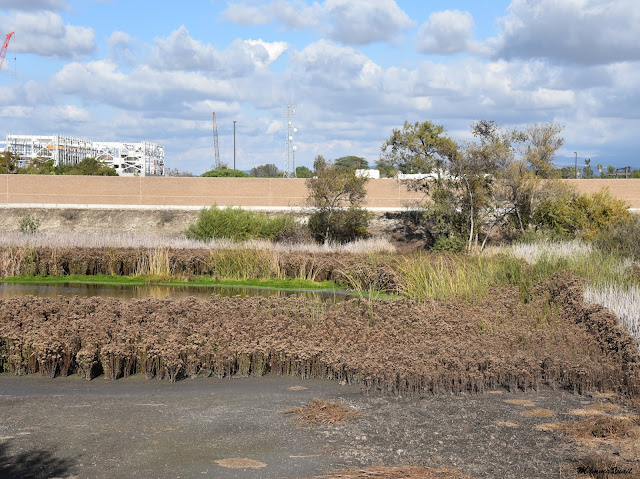 But the story of this hike wasn't over quite yet. Just as we were about to get down to the buildings Pappa Quail exclaimed and moved rapidly forward, his camera raised. I raised my binoculars. There, on the trail ahead of us, was a small bright red and black bird - a northern red bishop! This bird isn't native to California but was still very exciting and impressive to see. The bird didn't mind us much, even when we got close, it simply hopped into a nearby bush.

We had a lovely hike that day, enjoying our friends' company, and discovering a new (for us) birding place where we've seen some very pretty fowl. When we went back to our campground, following lunch and the promised ice cream, we finished that day with a lovely campfire at O'Neil Campground. It was also a very good birding day, but the best birding on that trip we would have on the morrow, at Bolsa Chica.